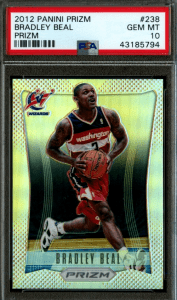 Bradley Beal (06/28/93) is a shooting guard who was chosen by the Wizards as the third overall pick in the 2012 NBA draft. Beal was selected in the 2013 All-Rookie First Team and is a two-time All-Star.

A highly-rated rookie, he struggled in his first few seasons before hitting his stride in 2018, when he made his first-ever All-Star appearance.

Here’s everything you could possibly need to know about the best Bradley Beal rookie cards, including an investment outlook as he enters a key stage of his career.

We’ve looked through recent auction data to bring you a list with three of the very best Bradley Beal RCs on the market. His official 2012 RCs were produced by Panini, while there are also a number of Leaf options from the same year.

(It’s worth noting that while his official rookie cards are only found in 2012-13 Panini releases, redemptions were available in a handful of 2011-12 Panini products.) 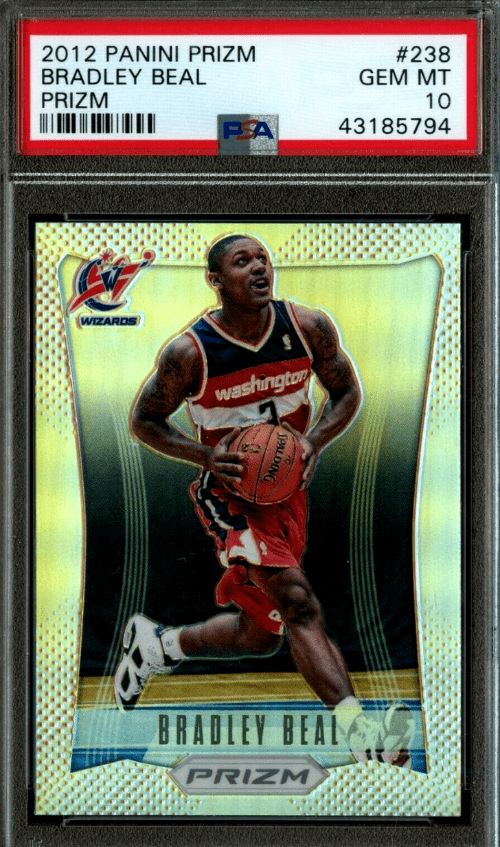 The Panini Prizm range is always popular with collectors, even if they don’t have a full rainbow of parallels on offer like you’d see in more recent years. The card has a layered effect, so Beal seems to be coming out of the background in a strong action shot that sees him looking up towards the net with a basketball in hand.

The mirrored background and metallic-style borders make it susceptible to a number of issues in terms of the corners and the surface, but it’s worth it for that unique Prizm style. It’s undoubtedly a great entry-level piece, while refractors are as follows; 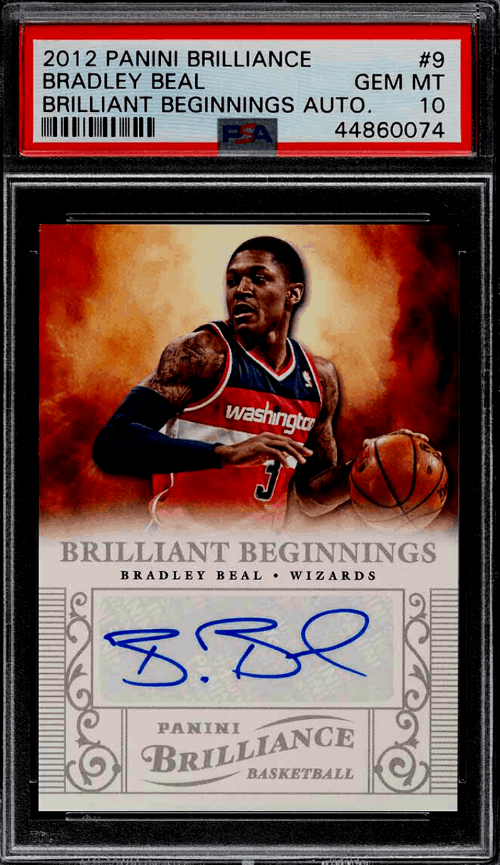 As a special insert from the 2012-13 Panini Brilliance set, Bradley’s Brilliant Beginnings is a beautiful card. (And that’s a lot of B’s!) The top of the card sees an image of Bradley with a ball in one hand, with a fiery explosion in the background. I’m not sure what that’s meant to mean, but it works.

The bottom of the card is white with silver trim and features a large stickered auto that takes up the majority of the space. It’s another interesting Beal RC, even if the lack of an on-card signature is a bit of a letdown. 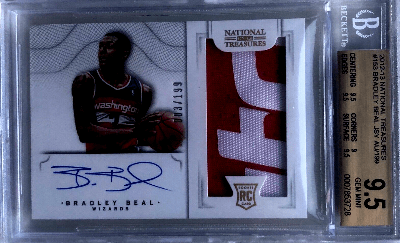 By far the most valuable Beal RC, his 2012-13 National Treasures is sure to attract bids whenever a copy comes up at auction. It’ll regularly sell for four figures, thanks to tight landscape design, a good action shot of the player, an on-card auto-filled in blue ink, and the addition of a game-worn patch. It’s also serial-numbered to 199, which can be found on the front of the card next to the image of Beal.

There are further rare parallels, while the power of the NT brand is enough to make it stand out from the crowd.

Looking for help purchasing a Bradley Beal basketball card? Email us at advice@goldcardauctions.com.

Our Card Ownership: None

Considering Beal’s a two-time All-Star, the majority of his RCs are relatively underpriced. He has a range of rookie cards to match every budget, and he seems to have recovered from the slump he was in a few seasons ago.

As of now, Beal is sitting this period out due to a shoulder injury (at least officially). It’s rumored that he refused to go to Florida because of Covid-19, but in any case, he’s not set to feature anytime soon. The Wizards are without their star guard, and they need him back again in time for 2020-21.

He should return next season, refreshed and ready to show exactly what his team has been missing out on. Another All-Star appearance would likely cause his RC prices to jump, while it would be hard to argue against a spot in the Hall of Fame.