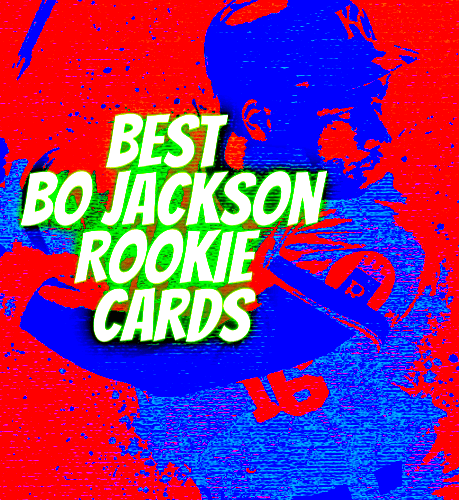 If not for injuries Bo may have been one of the best two-way players of all time and his rookie card values would be challenging the likes of Jordan, Brady, Mantle, and Gretzkt for supremacy.

As it is the return on investment in regards to his rookie cards is still top-notch and much better than average.

Without boring you any further here are top Bo Jackson rookie cards from an investment (aka what card will give me the most money) standpoint.

Below are the Bo Jackson rookie cards worth tossing some of your sports card investment money at. 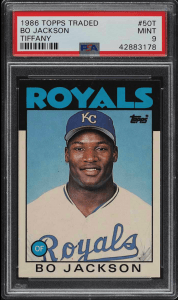 This is the card most kids from the 80s’ and 90s’ will remember. Who could forget tearing open a pack of 1986 Topps only to see Bo’s big smile staring back at ya (booyah!).

The 1986 Topps Tiffany Bo Jackson is one of his most valuable rookie cards and best looking as well. 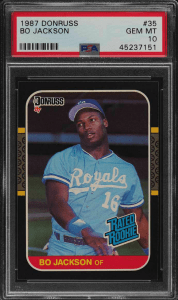 We are always a big fan of Rated Rookie cards and the 1987 Bo Jackson is no exception.

The card shows Bo in what appears to be mid-warm-ups tossing the ball around.

Numbered #35 the back of the card reads “The 85 Heisman Trophy winner, he shocked the world by turning down a reported 7 million 5 year offer from the Tamba Bay Buccaneers in order to play pro baseball with the Royals. 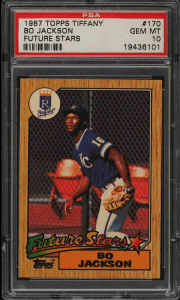 Another Tiffany card with the wording Future Stars is depicted across the bottom.

We love the graphics and image associated with the 1987 Bo Jackson Topps rookie card.

Not only is the future stars graphic super unique, the wood border also ranks high on our best borders of the all-time big board.

The card is numbered #170 and the card shows Jackson tracking down a pop fly in the outfield. 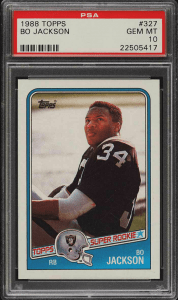 Above is his only football card worth investing in but the ROI should be solid both in the long and short term as Bo is one of those players that command year-round attention.

Numbered #327 the card shows Bo looking up at what we imagine is the scoreboard with a get me the hell out of here look on his face. 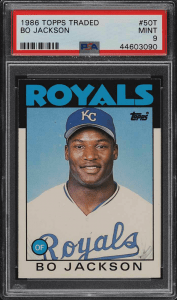 The exact card as the 1986 Bo Jackson Topps Traded Tiffany Rookie Card #50T except there were more of these made which made it less valuable.

Even though the card is not as rare as its Tiffany counterpart, it is still worth an investment if you’re considering buying Bo rookie cards. 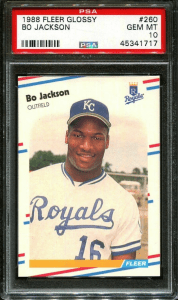 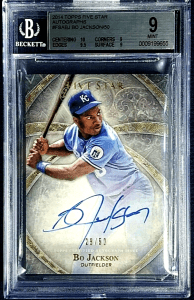 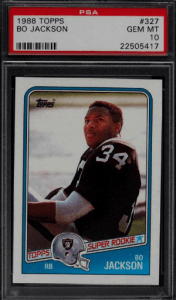 The most expensive Bo Jackson rookie card is the 1986 TOPPS TRADED RC #50T.

Please email advice@goldcardauctions.com if you would like help in regards to purchasing a Bo Jackson baseball or football card.

Email value@goldcardauctions.com to obtain an estimated value on your Bo Jackson rookie card (include at minimum 2 photos).

Bo never truly met the hype surrounding him coming out of the University of Auburn and wished he would have just played baseball.

“If I knew now what I had known back then I would have never played football. Never. I wish I had known about all of those head injuries, but no one knew that. And the people that did know that, they wouldn’t tell anybody,” Jackson said.

IF he would have focused solely on baseball from the time the New York Yankees drafted him in 1982, we might very be having a different conversation right now.

Sadly that is not the case as he suffered a serious hip injury in 1991 against the Cincinnati Bengals, ending his football career and essentially his baseball career as well.

His rookie cards still retain some value but not much. We wouldn’t have a problem buying one (either his Topps Tiffany or the Rated Rookie) but any more than one is too many.