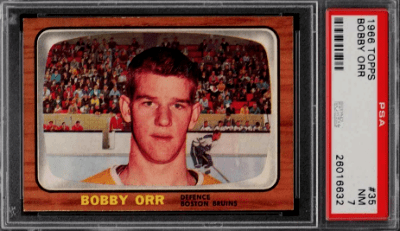 Bobby Orr (03/20/48) is a retired defenceman who is widely seen as one of the greatest of all time. A Boston Bruins legend, he won a record eight consecutive Norris Trophies and three consecutive Hart Trophies and entered the Hall of Fame at the age of 31.

Here’s everything you need to know about Bobby Orr hockey cards, from the best options to an investment outlook for the next few years.

Here are three of the best Bobby Orr hockey cards that money can buy. They’re all vintage, and they’re extremely hard to find if you’re looking for pristine copies.

The Orr RC was released in the 1966 Topps set, and it’s his most valuable option by a fair margin. The front is reminiscent of an old CRT TV, with a profile photo of the player found in the middle. It has no hard border, while the back of the card has both English and French text.

Trending: Most Valuable Hockey Cards from the 1950s

A mint PSA 9 copy sold for $204,000 in 2019, highlighting just how popular it is with collectors. It’s the sole copy to have achieved a 9 from the grading service, mostly due to centering issues, as well as chipping along the brown border. 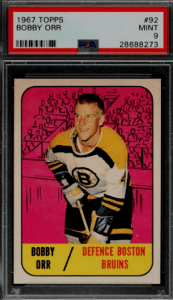 If you’d prefer a slightly more affordable option that still has a vintage feel, the ‘67 Topps release could be the one for you. The cartoon backdrop and the yellow and pink color scheme screams 1960’s, but there’s nothing dated about this card from an investment perspective.

This time, the card has a hard border, and there are a trio of PSA 10 copies on the registry, as well as over 30 PSA 9 graded cards. It features a great image of a smiling Orr, capturing a different side to the player than his RC. 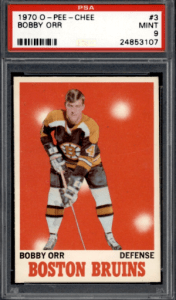 O-Pee-Chee cards are a French Canadian release, and many feature bilingual text on the reverse like this one. The front has an image of Orr at the ready, with a deep red background that takes up the majority of the card.

Released in 1970, it’s the most recent release to make the list, but should still be seen as a great vintage option that is a little cheaper when compared to Orr cards released during the 1960s. 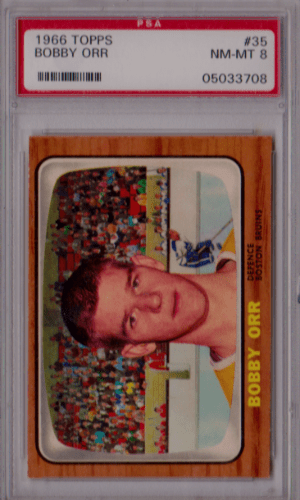 Orr’s cards are especially rare and valuable, and they’ve been bullish in recent years. Take his RC. There’s just one BVG 10 copy, which isn’t found on the PSA registry. It’s currently up for sale via Heritage Auctions, and they hope to see a $1.2 million price tag realized. That’s serious money.

It won’t mean much for the average collector, but it could provide another boost to the price of lower grades as the market adjusts to the new normal. As for the majority of his older cards, they’ll sell for four-figure fees if you’re looking at the best-graded copies. 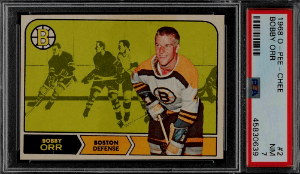 Here’s a rundown with all of the collectible Orr cards released during his playing career.

It’s no exaggeration to say that Orr is one of the best players ever. The Hockey News named him as the greatest defenseman of all-time, and in 2010, he again topped their list as the second greatest player in NHL history behind only Wayne Gretzky.

He instantly entered the Hockey Hall of Fame at the age of 31, becoming the Hall’s youngest inductee in the process. Knee injuries were the cause of his early retirement, having robbed Orr of the unique movement that made him so special on the ice.

He’s more likely to make the news for political reasons in recent years, but that won’t have an impact on the price of his rarest cards. From an investment perspective, there aren’t many better hockey cards from the era, and it looks to be a great long-term pick.