Robert Marvin “Bobby” Hull (1/3/1939), known as The Golden Jet, joined the NHL’s Chicago Black Hawks (the old styling) in 1958. Known as the master of the slap, Bobby Hull’s slapshot clocked in near 120 mph, striking terror into defenders (you going to slide in front of that?) and goalies alike.

As one of the most revered and feared hockey players ever to put on a sweater, Hull’s hockey cards appeal to many collectors and investors (also check out his son Brett Hull). 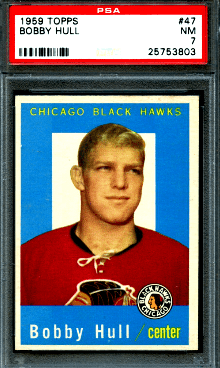 We start the list with Bobby Hull Topps #47, a card that feels right at home in 1959. It’s not flashy, but PSA reports very few copies in Mint and Near-Mint condition. That’s a plus.

The card features an image of Hull gazing into the distance like a war hero, sporting a red Blackhawks sweater. This image is common among Hull cards from this era (as you will soon find out).

The card features a blue border (shades may vary due to the unpredictable printing processes of 1959), with Hull’s sweater overlayed at certain points.

The card has an extremely simple design, with a yellow Black Hawks banner up top and a “Bobby Hull/Center” plate on the bottom edge. A small circular Blackhawks logo rests above the bottom nameplate’s right side.

Bobby Hull and Gordie Howe played together for the Hartford Whalers in 1979-80, and this card commemorates the legends’ shared season.

The card does not actually show either player in Whalers gear. Howe wears a red Detroit Red Wings jersey with red pants. Hull sports the white version of the Blackhawks sweater.

Both players stand crouched, stick to the ice in the trademark NHL photoshoot pose.

The card’s centerpiece is a Hull uniform patch in the shape of a #. Below it is a 9-shaped patch featuring Howe’s red jersey.

A blue autograph underscores each player’s image. Rarely will you find a dual patch auto card featuring legends of these guys’ respective statures?

It appears to be a woodgrain television set on cardboard. A headshot of a grinning Hull, strawberry blonde hair creeping back, features prominently on the left side of the “screen”.

The remainder of the horizontally oriented card behind Hull’s image appears to be drawn. Stands full of spectators, a bench full of Toronto Maple Leafs, and a sole Maple Leaf on the ice serve as the backdrop for Hull’s headshot.

It’s certainly out there as far as card designs go. Those with an appreciation for the campy will snatch this one up.

The 1960 Bobby Hull Topps #58 features the record-setting Chicago Blackhawk in a horizontal portrait.

Hull looks confidently towards the camera, though not directly at the photographer. His red Blackhawks uniform sports the iconic Native American head, which the team has used as its logo for decades.

The card’s backdrop is a gameshow-style, three-colored pattern. Two opposing tiles are white, while one is yellow and one is blue.

Before you knock this card for any reason, remember that Bobby Hull’s earliest cards came far before the playing days of his son Brett Hull, when trading cards were far more evolved.

As the only recognized rookie card featuring Bobby Hull, you already know that the 1958 Bobby Hull Topps RC #66 earns the top spot for all Hull hockey cards.

The card features the golden-haired Hull in his red Black Hawks sweater, which has not changed much for the Blackhawks teams of today. It’s the same image used for the 1960 Bobby Hull Topps #58—and why not? It’s one heck of an image.

Hull’s prominent jawline and confident gaze were defining characteristics of the hard-shooting alpha.

A white border gives way to an interior background divided diagonally between green and yellow shades. The top of the card features an italicized “Bobby Hull” banner in white font.

A green nameplate secretly placed on the bottom border reads “Chicago Black Hawks” in white font and “Center” in black font alongside.

The design seems dated today. For a card from the 50s, this one is downright fancy!

No copies have been discovered with a PSA grade greater than 9. PSA has assigned a grade of 9 to only two 1958 Bobby Hull Topps rookie cards. Only 10 have received a grade of 8.

This lack of highly-graded Hull rookie cards puts the most mint copies at a premium. This card ranks near the top of all Blackhawks rookie cards ever produced.

Here are the values for the most valuable Bobby Hull rookie card and non-rookie card.

Bobby Hull’s best cards tend to be older. Those produced in the late 1950s and early 60s are subject to printing issues and damage. As a consequence, Mint copies are few and far between.

The rarity of older cards is excellent news for collectors who can get their hands on Mint and Near-Mint copies. Prices rise precipitously for highly graded Hull cards.

And yet, you’ll find that mid-tier and low-graded Hull cards can also be quite expensive by hockey card standards. Hull is a legend, and his best cards are well-regarded in collecting circles.

Overall, the investment outlook for these Bobby Hull hockey cards is strong. The outlook is considerably brighter, though, if your card is Mint or Near-Mint.