Bob Gibson played 17 seasons for the St. Louis Cardinals as a pitcher and was a nine-time All-Star and two-time World Series winner during that period.

An incredible athlete, he even spent late 1957 with the vaunted Harlem Globetrotters, although it’s rumored that Cardinals exec Bing Devine offered Gibson an additional $4,000 to give up hoops and that the money provided the necessary persuasion.

It proved to be a good decision for Gibson, as he was elected to the Baseball Hall of Fame in his first year of eligibility in 1981. He sadly passed away in October 2020, following a battle with pancreatic cancer.

We’ve come up with three of the best Bob Gibson baseball cards, with a mix of options to suit almost every budget. You’ll also find investment advice for his cards below.

The cards that have made the list come from a trio of different decades, and have vastly different values. 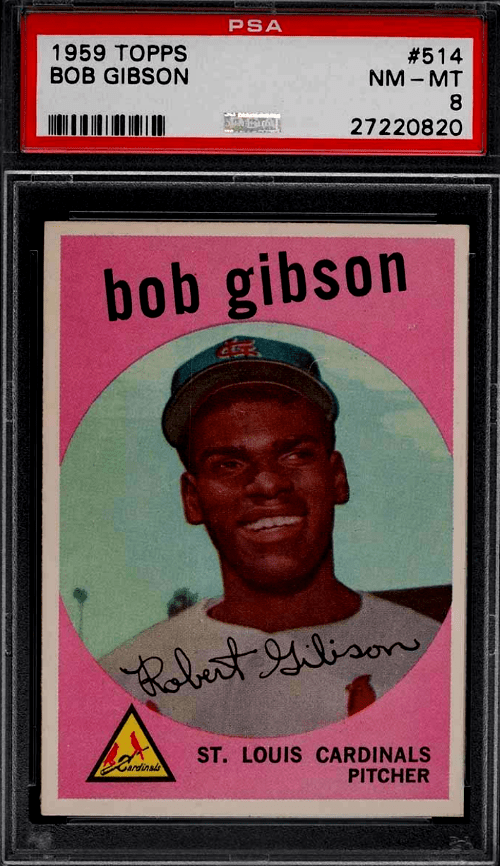 The undisputed king when it comes to Gibson collectibles, his 1959 Topps RC is exceptionally difficult to find at higher PSA grades. It’s the only Hall of Fame player rookie card from the set, while it’s instantly recognizable thanks to strong design choices.

“They’re all great from an investment perspective, but few can match his 1959 RC.”

It features a profile shot of Gibson within a circle in the middle, and there’s a facsimile autograph found at the bottom. The background is bubblegum pink, which helps it to stand out compared to many later options.

The interest is reflected in the considerable asking price, especially when looking at anything above a PSA 8 grade. For example, there are just three gem mint copies according to the PSA registry, while the last to sell went for $53,759 back in 2012. Judging by the rapid rise of PSA 9 grades in recent years, it has to be one of the best Gibson cards overall. 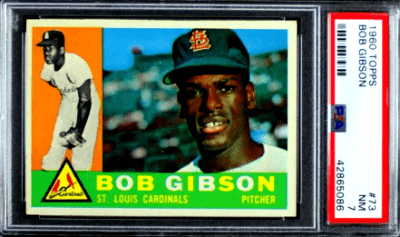 Released a season later, the 1960 Topps card is a much cheaper option despite its advancing years.

Gibson’s ‘60 release has a landscape design that makes space for two images of the player. There’s a black and white shot on the left set against an orange background, while you’ll find a larger profile shot on the right. You’ll also find a green tab at the bottom, making space for his name and a vintage Cardinals logo.

There are no mint copies on the PSA registry, while even 9s are extremely limited. It’s a solid second-year card, with a strong design concept and two great images. Prices have remained stable in recent years, so now could be a good time to buy. 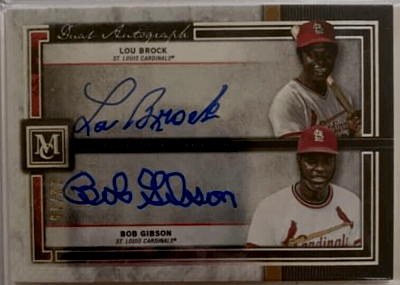 If you’d prefer a more recent option, or even a signed card, look out for his 2020 Topps Heritage High Number Real One Dual Autographs release. As the name implies, he shares the card with another major star from the time in the form of Lou Brock.

It’s a great choice that focuses on the two Cardinals legends, placing them side by side. The black background and white lettering further enhance the traditional feel, and it’s limited to just 25 copies. The serial number is hand-signed and can be found in the top right corner.

One of the final cards released while Gibson was still alive, it’s another great option from an investment perspective. 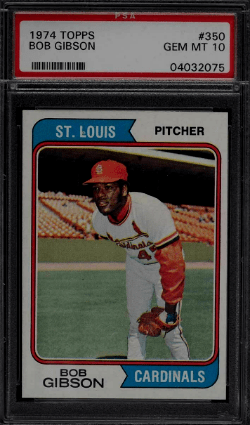 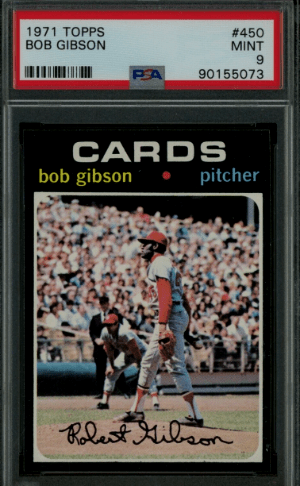 If you are in the market for a Bob Gibson baseball card but need buying advice please email us at advice@goldcardauctions or DM us on the Gold Card Auctions Facebook Page.

The stats show that Gibson was one of the best players from his era, and he’s still fondly remembered by Cardinals fans in 2021. It’s no real surprise, given his 17-year association with the franchise, and the numbers he recorded at the time.

He set various World Series records including eight consecutive complete games, seven consecutive wins, 17 strikeouts in a game, and three complete-game wins. He was also named World Series MVP for both the Cardinals wins in 1964 and 1967.

His cards have always been popular with investors and collectors, especially following the news of his passing late last year. Gibson’s death caused a clear upturn in prices, as collectors and investors scrambled to grab a piece of his merchandise before values went sky high.

There’s also a lack of options when looking for high PSA grades for some of his older cards, creating more demand compared to similar RCs from the era.

Above all, Gibson is a Hall of Famer with an array of interesting cards, including options from 2020 sets. If you have the scratch, his cards have to be seen as some of the best investment options from the time, and his RC is the pick of the bunch.