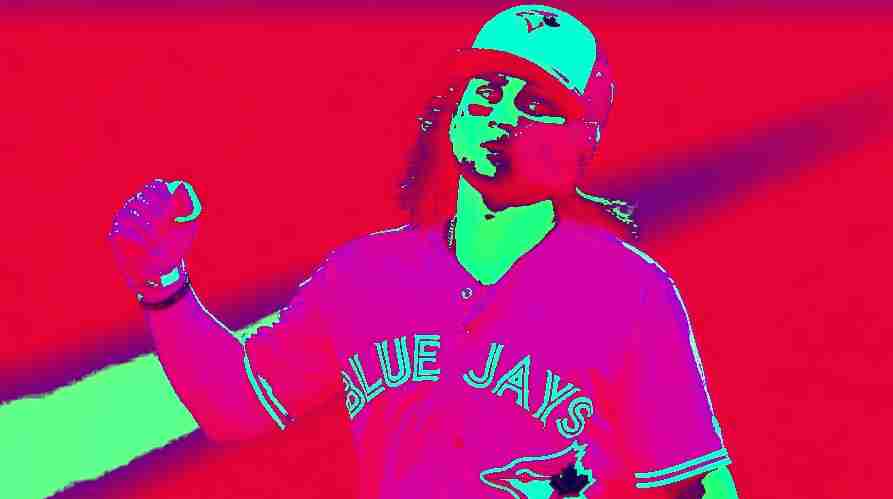 Bo Bichette is making himself at home in the Major League. As the shortstop for the Toronto Blue Jays, he has already claimed franchise records since being called to the big show in late July 2019.

After expressing frustration about his time in the minors, the sudden trade of Eric Sogard opened a coveted spot in the action-packed infield position.

Bichette singled in his first big league at-bat and has become one of only three MLB players to achieve nine extra-base hits at such an early point in his career. Bichette joins an impressive company with Carlos Delgado as the only Blue Jay to hit three home runs in their first-eight career games.

With (currently) 15 hits since his debut, his rookie year is off to a better start than any other player in bluebird history. The 21-year-old is a massive factor in a Blue Jay franchise that is rebuilding. Get excited about this underdog’s story and potential to rise to stardom by investing in these collectible cards. 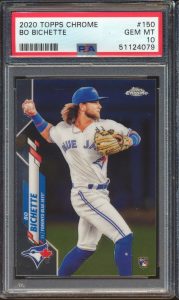 Topps Chrome baseball has taken over as a player’s most popular rookie card on players that feature a Topps and Topps Chrome in a similar card/design.

Collectors or buyers since 2020 have preferred buying a player’s Chrome rookie versus their Topps if the player features both cards.

Topps rookies were considered the “go-to” rookie in past years, but now Topps Chrome continues to dominate in 2021. Bichette’s Topps Chrome rookie featured in a PSA 10 example is still very obtainable for many collectors and buyers.

Bichette’s Chrome rookie is an excellent long-term investment because Chrome will always be considered “king.” This card could easily double in value in the future at its current value.

Refractors are twice as rare as the Bowman Chrome base version, this is already becoming a tougher card to find a PSA 10 example.

A first-year Bowman Chrome Prospect card will always have great long-term value because these cards are considered a player’s MLB licensed card when they are first signed or drafted to a Professional MLB organization.

Your best bet is investing in a PSA 9 example of this card. This card still has plenty of room for growth in this grade.

Here is one of the top Bichette rookie cards and can usually be found on eBay Auctions at any given time.

The eye-catching refractor version makes this rare card of a rising star scream for attention while displaying one of the most exciting superstars in the league today.

Its value will surely rise as the new Major Leaguer continues to climb the ranks and shatter clubhouse records. 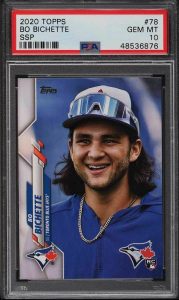 One of Bo Bichette’s chase rookie cards in his SSP (Super Short Print). This card is already becoming tougher to find, especially in high-grade examples. SSP Topps rookies are very popular and challenging to pull out of packs/boxes. 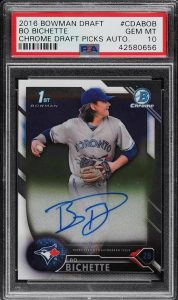 Bowman Chrome Auto has exploded in value within the past couple of years, and although the price may seem high right now, an investment like this could pay off hugely in both the short-term and long-term.

The key with the first-year Bowman Chrome Autograph is to analyze the condition of the card and the autograph before buying.

BGS (Beckett) features the dual-graded examples as well on Bowman Chrome Autographs examples BGS 9/10 means the card is graded a 9 and 10 autograph.

The key with BGS is looking at the different variations of sub-grades which can increase or decrease the value depending on what the sub-grades received.

Bowman Chrome Autos are highly sought after, and Bichette’s still has plenty of upsides to increase more in value.

Topps recreates cards each year to commemorate anniversary years. This card is a 35-year anniversary card debating back from 1985.

The design looks like a refractor and this is a nice cheaper alternative card to buy instead of the other examples listed above.

This is a nice addition to add if you’re collecting Bichette. A card like this is something unique and different.

Unique cards tend to become tougher to find over time, so this is a lovely card to buy now, especially in a PSA 10 example.

Another Bowman is available in a variety of parallels.

The refractor version is numbered #BDC32 and is an excellent addition to any investor’s collection. The reverse side of the card displays Bichette’s minor league statistics that are sure to be blown away by his hot start in the majors.

High-grade examples like his Orange Refractor Auto serial numbered out of 25 are already going 15,000+ The most expensive sale recently was a BGS 9.5/10 example in July 2021.

Please email us pictures of your Bichette rookie card to value@goldcardauctions.com for a price estimate.

Rating 3.5/5 – Bichette broke into the majors at a young age (21), which helps his long-term value. He plays a premier position at shortstop and is already considered one of the best at his position.  Playing in a loaded lineup with the Jays will help him put up consistent numbers year in and year out.

He is eligible to become a free agent in 2026 and will most likely be a coveted free agent. Bichette already has good career numbers with a high batting average and should average close to 25-30 home runs per year.

Investing in Bichette should pay off in the long-term as long as he continues to rake as he had in 2020 & 2021.