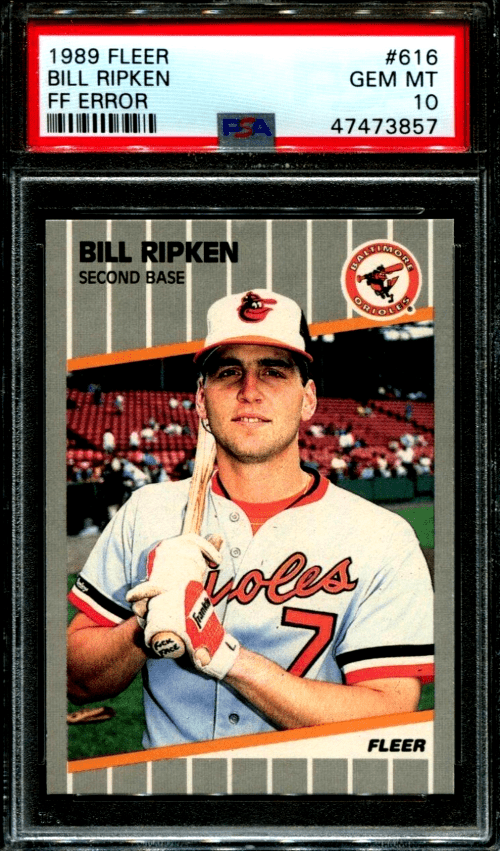 It has his name and position in the upper left corner, the Baltimore Orioles logo adjacent to that on the right, and the Fleer logo below the picture of Ripken.

Ripken is holding his bat over his shoulder, his white Orioles jersey unbuttoned showing his orange undershirt. He’s wearing his father’s number seven, but this would be the only year that Bill Ripken would do this.

This was 1989, the baseball card industry was booming, and card companies were producing more cards than consumers could keep up with.

Eventually, this era would become known as the “Junk Wax” era due to the sheer number of cards made, many exactly like this Bill Ripken card. But if this Bill Ripken card were like any other card than it would have never taken on the life and special aura that it did, and all because of one little detail. Many would miss it upon first glance, think that maybe they were imagining things. How could a baseball card be printed with the words “Fuck Face” on it? The words are clearly legible on the bottom of Ripken’s bat, written in sharpie and visible just below his left glove. From this, an iconic card was born.

Thus, the Ripken family was well known in Baltimore and were key cornerstones for the organization for a long time. Billy bounced around teams, never quite enjoying the success that his brother did. Cal Jr. is famous for his ironman streak of 2632 consecutive games, but Billy would often find himself on the disabled list or unable to play. Still, Billy managed to carve out himself a nice MLB career and was known as a strong fielder for his position.

Seeing yourself on a major league baseball card must be a great feeling for any player. To see how your years of hard work, sacrifices, and effort have culminated in you achieving your goals must be a great feeling. You are now in the place that you admired as a child and are peers with your idols. They can act as a signpost to show that you have really made it, which is why it can be unfortunate when an error creates an infamous card which is now linked to that player forever.

Error cards have been an interesting subset of the hobby for some time now, and in the ’80s and ’90s with collectors everywhere hoarding cards thinking one day their values would skyrocket they were sought after because of their rarity. These cards usually become favorites among collectors due to their unique features as well as the price they command due to their rarity. Perhaps the most commonly known error card is the 1990 Topps Frank Thomas “No Name on Front” error card. The card shows him kneeling down, but the fun with the card is the fact that his name is not printed anywhere on the front. This card captured the imagination of collectors and highly graded versions will fetch a good amount on the resell market.

Upon the first release of the 1989 Fleer MLB set, collectors went wild for the Bill Ripken card after the discovery of the message on the handle of his bat. Realizing their mistake, Fleer would be forced to get creative to cover the message during future print runs of the card.

Their first attempt would involve covering the writing with a white splotch but that would eventually evolve into a black square covering the obscene writing. There were over a dozen different corrected variations made afterward, but none of them are as famous as the original. 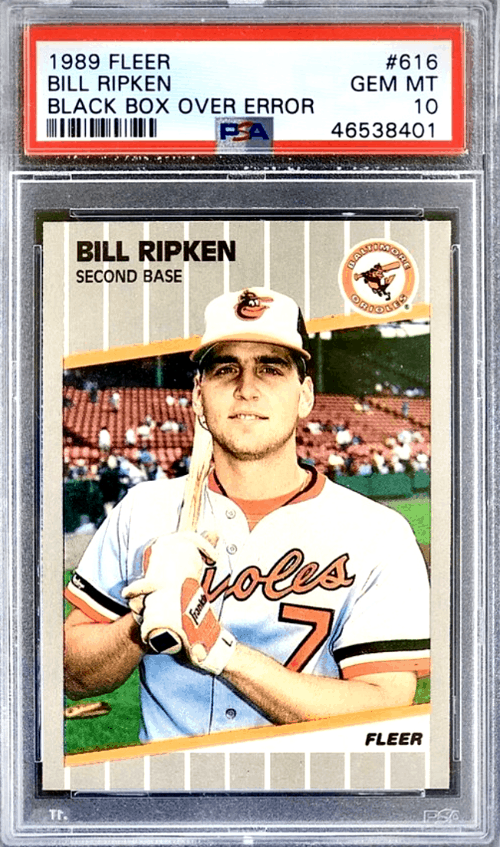 The big question that everyone has upon first seeing the card is always the same. How did this happen? Was it written on the bat or added afterward in production? How did no one notice? The answer is more complicated than it seems. There are differing stories and depending on who you want to believe you will hear a different story. However, who better to trust that Ripken himself.

Ripken was asked the question by CNBC reporter Darren Rovell in 2008. Ripken explained that he needed something to put on his batting practice bat to differentiate so he could grab it at a moment’s notice. He decided to write “Fuck Face” on it, something that would keep his bat identifiable and he knew no one else would copy. His story goes that he had no idea until the card came out and by that time it was too late. Others try to poke holes in Ripken’s version of the story. A common theory among collectors is that it was done by a Fleer employee as a prank or possibly by some of Ripken’s Baltimore teammates. Another story that has been put out there is that it was the doing of Ripken’s brother Cal. Like most stories, the truth likely falls somewhere in the middle.

Ripken insists it was written on the bat, but it seems implausible that no one at Fleer would have ever caught it at any point during the production process. However, collectors and Ripken alike have theorized that in fact it was actually caught by Fleer, but they let the error pass through as a marketing technique. As Ripley explained to Rovell he “can’t believe the people at Fleer couldn’t catch that. I mean, they certainly have to have enough proofreaders to see it. I think not only did they see it, but they also enhanced it. That writing on that bat is way too clear. I don’t write that neat. I think they knew that once they saw it, they could use the card to create an awful lot of stir.” (CNBC, 2008).

If that was Fleer’s plan all along – they saw the obscenities and instead of getting rid of it they realized what a great possibility it presented and actually enhanced it – then their marketing plan worked perfectly. The card was a hit from the moment it dropped, and it has not stopped being a hit since.

During the late 1980s and the early 1990s, it seemed like everybody and their mother were buying baseball cards. Heralded as an investment opportunity similar to stocks, people were deluged with images of future riches after having seen vintage baseball cards, such as the T206 Honus Wagner, selling for high prices. Thus, when a card like this was released to the general public everyone wanted a copy of one.

The novelty made people laugh and it was uncertain how many were going to be produced before Fleer caught their mistake and took some measure to fix it. The hysteria around this card only multiplied due to the popular thinking that it would make a great investment if held on to for a long period of time. Baseball cards had moved on from being a collectible into being an investment good and people had lost their minds. Unfortunately for them, this card like a large majority of the others from the same era would never see the huge returns on investment that they were hoping for.

However, with so many different variations made after the fact and some people attempting to collect them all, some of the more limited variations can fetch a good amount of money online. There are collectors that attempt to collect every variation of the card and with some being more limited than others the price isn’t always cheap.

A good lens into the type of cult-like following that this card has created can be seen by taking a visit to billripken.com. The website is not run by Bill, but rather by a man named Jon who has fallen in love with the 1989 Fleer card and its many variations. On his website, Jon writes about reading about the card and then opening packs in an attempt to find one. After that proved unsuccessful, he managed to buy the card at a card show the following week. From there an obsession was born.

Eventually, his collection of Ripken “FF” cards birthed this accompanying website where Jon has managed to connect with collectors from all over the world and help aggregate all the known information about the card. As hard as it may be to believe, Jon says that no year goes by without new information coming to light about the card. No matter if it is a new variation found that Fleer put out to cover the message, or new details surrounding the story as to how it was produced, the new information has kept Jon engaged with the card over the years and has made sure that his hobby has never bored him. Billripken.com has now become a place where fans of the card can congregate and find like-minded collectors. The place is a treasure trove of information surrounding the card and goes beyond the Ripken “FF” card to explore other unsavory cards.

The Bill Ripken “Fuck Face” card is one that will never be forgotten and will be passed on down from generation to generation of card collectors as one of the most amusing cards of all time. Kids fell in love with the hilarity of the card, while others fell in love with the potential upside of its investment. Overall, while those who invested may be disappointed with the result, the card remains iconic for many collectors who were growing up during that time period. The mystery of how the card came to print will stay shrouded as long as there are multiple versions of the story – and the story will surely be twisted more and more as the story is passed down – but no matter the truth Fleer benefited greatly from the card and if it was a deliberate marketing move, then it was a very good one.