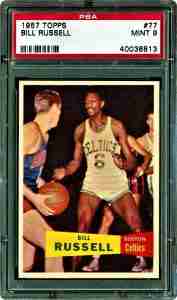 Bill Russell is the most decorated player in NBA history. He played in the NBA for 13 seasons and won 11 championships. He spent his entire career with the Boston Celtics.

Russel did not just have team success; he was also tremendously successful as an individual. He was the NBA MVP five times, an all-star 12 times, the rebounding champion four times, and made one All-Defensive First Team.

As a result of his accomplishments, Russel’s No. 6 was retired by the Boston Celtics. Additionally, he was inducted into the Basketball Hall of Fame.

With that in mind, we are going to look at the best cards out there, including Russell’s sole rookie card.

As we mentioned above, only one manufacturer printed an official Bill Russell rookie card. While we will look at that card, we do not want to stop there. As a result, we are going to look at a few of his other most valuable trading cards.

While it might be disappointing to hear that there are not many options out there, their scarcity makes them more valuable.

While there are other Bill Russell trading cards that are easier to get on a budget, this is what collectors should look to purchase.

The front of the card is fairly standard as it features Russell defending an opponent while wearing his white Celtics uniform. The only other feature on the front is a yellow and red text box displaying his name and team.

The back of the card features his age, weight, height, college, hometown, and a short blurb about his college, Olympics, and early NBA career.

This card isn’t anything special at first glance, but it is the only Bill Russell rookie card. As a result, it is tremendously valuable. 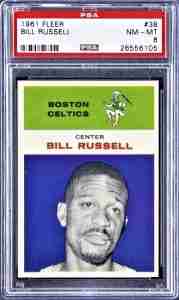 It took several years until another Bill Russell NBA product of any kind was made available. It would also be the final major release of Russell’s playing career.

Fortunately, there were two cards released as part of the 1961-62 Fleer collection. The first of these cards features a headshot of Russell with a blue background.

Above his headshot is a white strip with his position and name. Finally, the top of the card has a green background and it reads “Boston Celtics.” 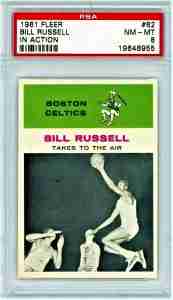 Released in the same set as the card above, this is part of the “In Action” subset. The Fleer set contained 44 main cards including the one discussed above, and 22 action cards.

The design of this card is not very different from the other one, except the background of the image is black instead of blue.

The picture of Russell on this card features him jumping towards the basket above two opposing players. There is even a caption on the front that reads “Bill Russell Takes To The Air.”

Since there is only one Bill Russell rookie card, it is extremely valuable. Their price is increased even further if they are in good condition. Since so much time has passed since their release, there are very few mint condition cards available for purchase.

If you have a Bill Russell rookie card, you can contact us to get its estimated value. Simply, email us or leave a comment below with two pictures of the card. We’ll get back to you as soon as possible!

Bill Russell is one of the biggest legends in NBA history. He only has one rookie card, and as a result, those cards are very expensive to purchase in good condition.

Unfortunately, it is no longer possible to purchase Russell trading cards in good condition and at low prices. So, while you can make your money back on these cards fairly easily, you are unlikely to turn a massive profit.

How Much Is a Bill Russell Rookie Card Worth?

Even in poor condition, Bill Russell rookie cards sell for over $1000. If you can get your hands on a mint condition card, you can expect returns in the high five figures.

When Was Bill Russell a Rookie?

How Many Bill Russell Rookie Cards Are There?

The 1957 Topps RC #77 is the only official Bill Russell rookie card.