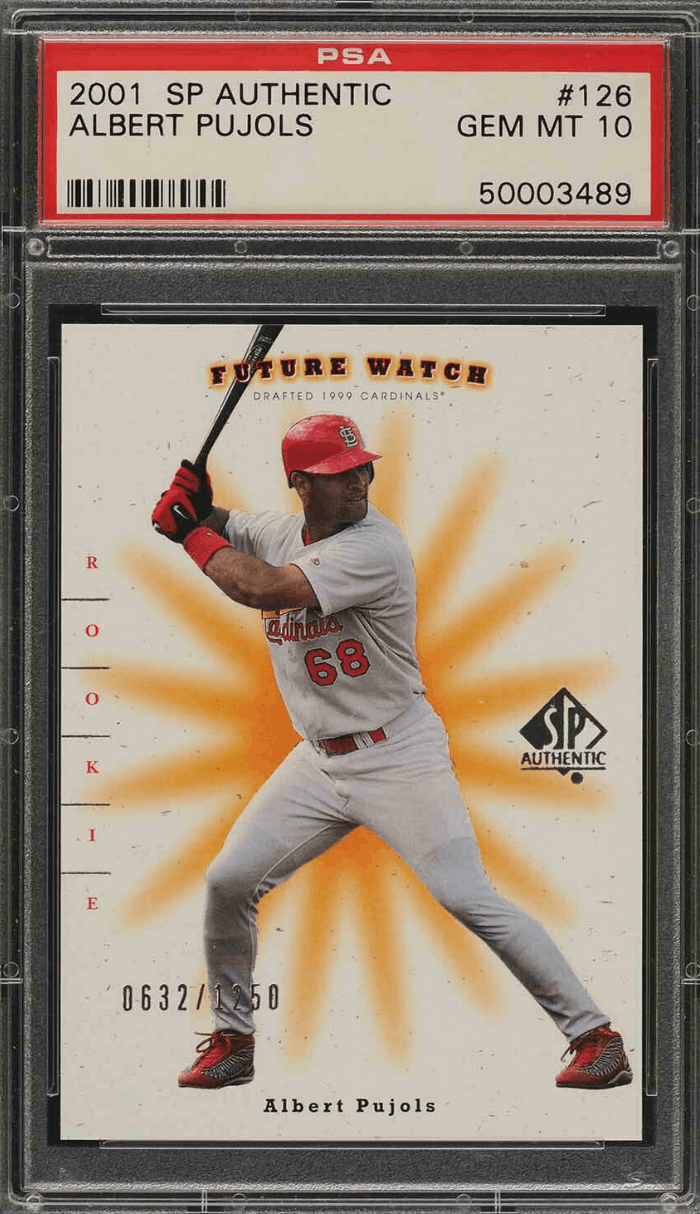 We must start out by saying this list was extremely difficult to decide upon as any of the top 4 St. Louis Cardinals players could make the number one rookie card in our opinion.

The St. Louis Cardinals have a rich tradition of being the best baseball city in America and have the World Series Rings to back it up (only the New York Yankees have more WS Titles).

The St. Louis Cardinals were founded in 1882 and compete in Major League Baseball as a member club of the National League Central division (Along with the Cubs, Brewers, Reds, and Pirates).

They play at Busch Stadium and have the loyalist fans in baseball. Whenever a former player comes back they are almost certain to give them a standing ovation… some people find this sickening but most just smile, clap, and go with the flow.

The Cardinals have a long, long line of players that could make the best rookie card list as they have 20 players in the Hall of Fame (introduced at Cardinals).

The best St. Louis Cardinals Rookie Cards of All-Time list below is based on player performance on the field (please not we gave power the edge of defense), off the field popularity, and long term investment value of the card. 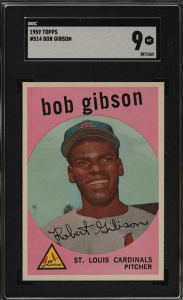 Here is a card with a very unusual background color for its time and that’s why we like it.

The 1959 Topps Bob Gibson RC has a gorgeous pink background that simply looks amazon in good to great condition.

Numbered #514 the back of the card reads “Bob’s performance at Rochester last year was so impressive that the Cards brought up the rookie after only two years of pro experience. With the Red 7 ahead of them. Before starting his baseball career he played basketball with the Harlem Globetrotters“.

This is an excellent long term investment for any collector. 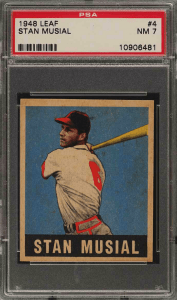 Truly one of the best Cardinals of all time and one of the most popular old-school rookie cards of all-time.

Stan Musial has a mind-blowing .331 lifetime average to go along with 475 home runs and a career WAR of 128.2 (for comparison Mickey Mantle career average was .288 and WAR 110.3… and for some reason Mantle is frequently listed above Stan the Man when they talk about the greatest players of that generation).

Our pick for the best Stan Musial rookie card is somewhat odd as it comes from Leaf. Leaf is not known to produce many high valued old-time baseball cards but here is one of them.

The 1948 Stan Musial Leaf St. Louis Cardinals rookie card is a GREAT long term investment but is extremely difficult to find in good condition (even finding one in mediocre condition can be a challenge).

If you are lucky enough to already have a Musial Leaf rookie card we recommend holding on to it as it is truly one of the better long term/safe investments in the hobby. 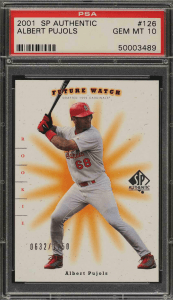 The 2011 Albert Pujols SP Authentic rookie cards are just not one of our favorite STL Cards RC but it is one of our best picks in the hobby.

We love everything about this card…. from the classic Pujols jacked-up batting stance to the unique yellow star backdrop… it is truly one of a kind.

Albert Pujols has 656 lifetime home runs which are 6th of all time (currently behind Willie Mays who has 660… Pujols will pass that mark this season). Depending on how many more years Albert plays for he could find himself in the top 3 home run hitters of all-time. He would need to pass Alex Rodriguez (696) and Babe Ruth (714).

We recommend every collector invest in one or two of these bad boys as Pujols is one of the game’s top 5 players of all time in our opinion.

Where is the Ozzie Smith Rookie Card?

Now to address what some of you are most likely foaming at the mouth about… Ozzie Smith… he could of easily of been on the list but we left him off for two reasons… 1. Bob Gibson HAD to be on the list and 2. We value power and average more than defense. We simply like excitement and baseball in the 1980s was more of a pitching/defensive game… not to say that’s a bad way to play the game, just not what we prefer (maybe your opinion is different and that’s OK bruh 😉 ).