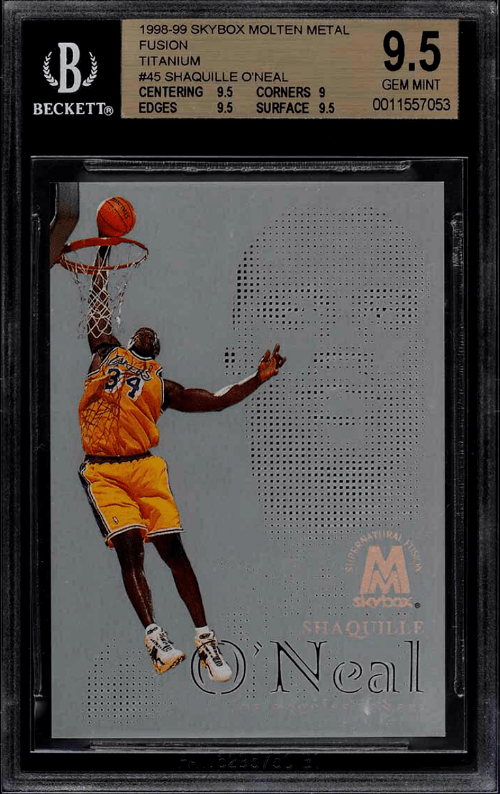 Shaquille “Shaq” O’Neal (03/05/72) is one of the most recognizable retired players on the planet. Coming in at 7’1 and weighing 325 pounds, he was uniquely large and athletic, even by NBA standards.

After four years with the Magic, O’Neal signed with the Los Angeles Lakers in ‘96. They won three consecutive championships in 2000, 2001, and 2002, before a falling out with teammate Kobe Bryant caused Shaq to move to the Miami Heat in 2004.

We’ve come up with a list of the best 5 Shaq cards during the most memorable time of his career when he regularly donned the yellow and purple of the Lakers.

The Best 5 Shaq Basketball Cards in a Lakers Uniform

Shaq is a great subject for impressive images, given his frame and the sheer spectacle that is watching him break backboards. The late 1990s were great for shiny cards that are pretty valuable today, while later releases contain patches, autos, and low serial numbers.

We’ll start at the beginning when Shaq first signed for the Lakers.

The 1998-99 Skybox Molten Metal set features a number of inserts, including this attractive card that has an image of Shaq dunking on the left. The right has an image of his face cut into the card, using tiny holes against the grey backdrop.

The age, coupled with condition issues typically found on the corners and the surface make this one of the better early Shaq cards if you can find it in mint edition. 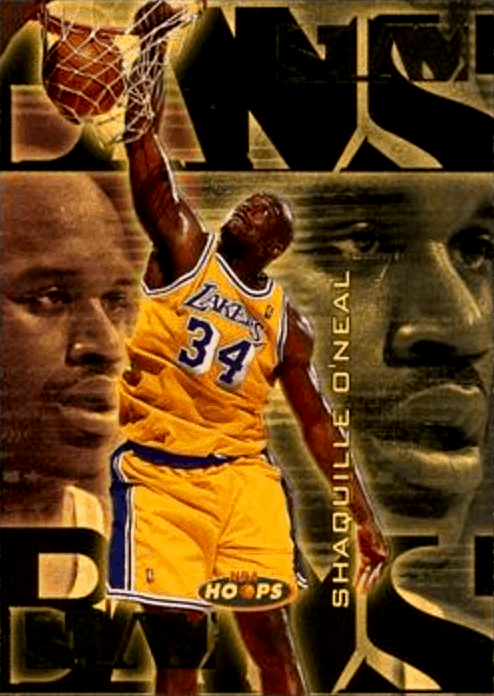 Next up is a Hoops release from the same season. The ‘Slam Bams’ set is an SP, with the regular version of this card numbered to 250, along with a gold version that’s numbered to 100.

As well as a typical image of O’Neil with one hand on the rim, it features a duo of profile shots on either side. His yellow Lakers jersey is on display prominently, and it shimmers thanks to the chrome finish. 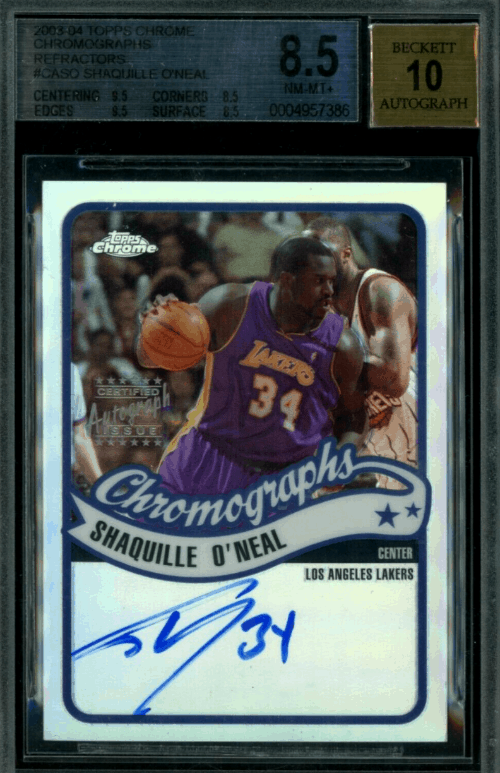 The 2003-04 Topps Chrome set has a number of signed editions found in the ‘Chromographs Autographs’ subset. It shows Shaq dominating in the top half of the card, wearing a purple Lakers jersey.

Underneath the Chromographs logo, you’ll find a large white space for his auto, which is filled in blue ink. 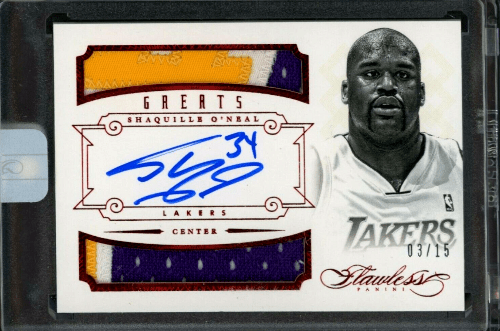 The Panini Flawless set from 2012-13 was released a year after O’Neil retired. Regardless, that means that he could be included in the ‘Greats’ subset, which looked back over his time with the Lakers.

A grey image of O’Neil is located on the right, while the left is devoted to a premium on-card auto, coupled with a double patch, in the yellow and purple of the Lakers. It’s also limited to 20 copies, so it’s worth a significant amount whenever a copy comes up at auction. 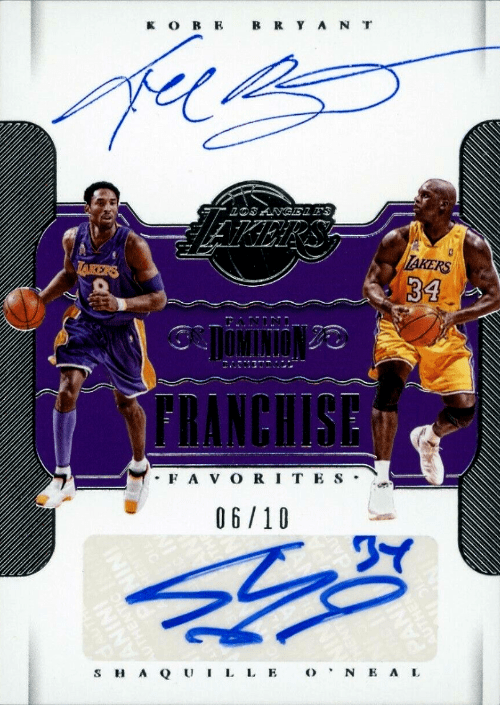 Part of the Franchise Favorites Dual Signatures subset, this card sees Kobe and Shaq teaming up once more. The card is split in half to allow space for each player, with a signature for each filled in blue ink.

However, while Bryant’s is an on-card auto, O’Neal has to deal with a stickered version, which is found at the bottom. Kobe is found on the left in purple, and Shaq is on the right in yellow. It’s a more recent release, but the silver chrome finish and a print run of just 10 copies have helped it to be one of his more expensive cards in a Lakers uniform.

As you can see, the best Shaq Lakers cards aren’t limited to the time he spent with the team. Given his larger than life persona, it’s no surprise to find that people still associate him with the trio of NBA championship wins, and the city where he found the most success during his playing career.

With that being said, there are some great options from the late ‘90s and early noughties, with many already reaching their 20th anniversary. Prices can reach the four-figure range depending on the grade, and the same goes for rarer cards such as the dual auto featuring Bryant.

Shaq will always be a legend, and the purple and yellow represents some of his best years on the court. As such, his Lakers cards are great long-term investment options, if you’re willing to hold onto them for a while at the very least.