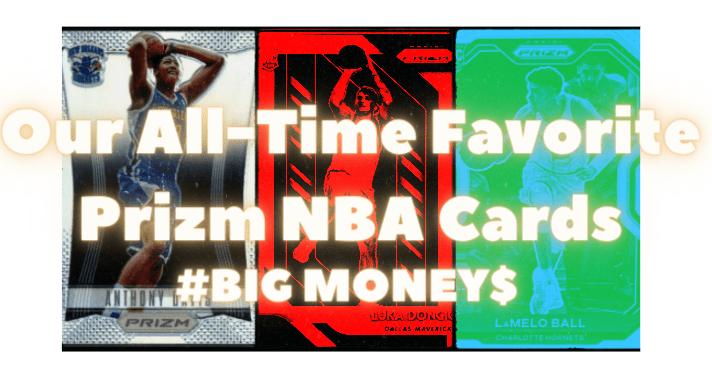 The cards mentioned in this write-up are some of the best investments in the hobby and we own at least one of each (update: we no longer own Kawhi Leonard, Anthony Davis, Kobe Bryant, and Zion Willamson as they were all sold for a LARGE profit).

The average price of Panini Prizm basketball cards has continued to rise over the last few years, making them a viable investment for astute investors (if not the best investment).

A number of options have rare parallels, which inflate the value further, while top prospects, rookies, and superstar players can easily sell for thousands depending on the overall condition and a host of different factors.

But which are the very best, and what you should look for in a Panini Prizm card that could potentially be added to your collection?

Prizm basketball sets are generally sizable. For example, the 2019-20 edition has a total of 300 cards, along with Silver, Gold, and Black parallels which only scratch the surface.

Some Prizm cards have serial numbers, which can range from a high of 299 down to the elusive 1/1.

That hasn’t stopped them from becoming one of the most popular sets in basketball, so we’ve prepared a list with some of the very best players to keep an eye out for if you’re interested in adding a Panini Prizm card to your collection.

There’s something to suit every budget, so let’s get started.

The number seven card on this list could go to a number of players but we are picking Trae Young due to his immense upside and ability to change the game both on offense and defense.

Numbered #78 the card shows Trae going up for what appears to be an easy lay-up assuming someone like Anthony Davis (who is also on this list) doesn’t come up from behind and swat the rock away.

The Prizm Logo is plastered in the top left corner while his name and team name are placed in the bottom right corner… a great-looking card with a HEFTY price tag at PSA/BGS/SGC high grades.

Kawhi Leonard was never supposed to be this good and he certainly didn’t suppose to win MULTIPLE NBA Championship Rings… We can only guess at how cheap the above Prizm Basketball card (read Michael Jordan Cards) must have been upon initial release… can you say 1000% ROI at a minimum?

Numbered #209 the card shows Kawhi coming down with the ball for another defensive rebound. The Prizm logo is placed at the bottom center while the Spurs logo is plastered in the top right corner… a true must-have for Kawhi fanboys.

LA Lakers forward Anthony Davis is a seven-time NBA All-Star who won Olympic gold with Team USA. A gifted player despite his cards being some of the cheapest we’ve mentioned, he was also named as the NBA All-Star Game MVP in 2017. But why has his Prizm card made the list at number one compared to the likes of Kobe and Zion?

The Anthony Davis’ 2012 Prizm Rookie Card doesn’t have an autograph, but it does have a strong chromium look that makes it feel more like a premium release.

It’s his key mainstream rookie card, and you’ll find the following quote on the back;

“It was quite a year for the former Kentucky star. After winning an NCAA title and becoming the No. 1 overall selection in the 2012 NBA Draft, Davis helped team USA take home the gold in the 2012 London Games, The 19-year-old made history, becoming the youngest gold medalist in USA basketball history”.

The action shot is typical, showing Davis preparing to dunk. A gem mint version recently sold for $305, making it extremely affordable compared to the others we’ve already mentioned. It’s already jumped from the $260 paid for another PSA 10 in July 2019.

Despite notching up a number of injuries in his short career, Zion Williamson was the top pick in the 2019 NBA Draft and is regarded as one of the most talented rookies in the game.

A typical Prizm card in its presentation, the sleek design, and a vast array of parallels make it one of his top rookie options. Here’s a full list of the available parallels;

He also has a Prizm image variation, that has a further Fast Break variant. The Fast Break has a shiny background design, making it easy to tell the difference between the two.

Zion’s rookie cards are some of the most hyped in recent years, and they continue to increase in value with every standout performance and award he receives. Of course, prices will also vary depending on the overall condition and the version on sale.

“Following in the footsteps of Art Heyman (1963), Elton Brand (1999) and Kyrie Irving (2011), Williamson became the fourth player from Duke to be taken first in the NBA draft in 2019. And if you believe the hype, he could be the best. Winning the NCAA Player of the Year award as a freshman is just the beginning”.

Giannis Antetokounmpo rookie cards have a ridiculous range of options to choose from, but why did his Prizm cards make the list at number five? The ‘Greek Freak’ has been an All-Star every season since 2017, and his meteoric rise culminated in an NBA Most Valuable Player award in 2019. He definitely has a claim at being recognized as the best basketball player in the world right now.

“Antetokounmpo averaged 8.0 points and 7.6 rebounds at the FIBA U-20 European Championship in July 2013 in Estonia, helping Greece to go 8-2 and finish fifth in the 20-team tournament. “I had never played against the best guys in Europe before, to see what I’ve got,” he told the Milwaukee Journal Sentinel.”

Featuring Antetokounmpo in his Bucks uniform, the card has an RC logo on the top left-hand side. PSA 10 graded copies have been going for over four figures recently, with an especially fresh version selling for $2,225.00 at auction. The reverse reads;

2013 was the year the “Splash Brothers” gained notoriety and then for the next 6 years, they owned the league. Steph Curry (although he would never admit it) was the better of the Splash Bros and can drop dimes ALL NIGHT LONG if needed.

Must Buy: Best LaMelo Ball Rookie Cards To Invest In

The 2013 Stephen Curry Prizm Gold Prizm basketball card is another one of the white whales we fear will never be caught.

There were only 10 of these bad boys made and we have only seen two for sale. A great card that will only increase year in year out for decades to come.

If you can’t find the Gold Prizm or simply don’t want to spend that much cash other lower-cost parallels are available.

As we have stated many times before we are not fans of LeBron James but we DO respect what he can do on the court. You will never find us buying a LeBron card as there are other options we can spend our war-chest on BUT if you are a LeBron fan his 2012 Downtown Bound Gold Prizm is DRIPWORTHY.

2019 NBA Rookie of the Year Luka Doncic is one to watch out for over the next decade. He already holds a number of records at the tender age of 21, including being the only player in NBA history to record two triple-doubles before the age of 20.

Given the meteoric rise of his career so far, it’s no surprise that the Luka Doncic 2018 Panini Prizm Rookie is the cream of the crop, and the main draw for the year.

If you’ve got money to play with, there’s only one way the value is likely to go in the next few years if he keeps up his incredible start to life in the NBA. The back of the card reads;

“With Real Madrid, Doncic donned jersey No. 7 en route to claiming MVP honors and leading the Spanish side to a EuroLeague crown in 2017-18. With Dwight Powell in possession of that digit in Dallas, the Slovenian star doubled down on his lucky number and became the first Mavericks player ever to wear 77.”

The 2018 Luka Doncic Panini Prizm Rookie Card sees him taking a one-legged shot, which can we only assume went in for a swoosh. Price-wise all of them (including the base) is going to cost a ton of cash at high grades.

From an up-and-comer to a player who saw it all; Kobe Bryant’s 2012-13 Panini Prizm Autographs card is a clear favorite for collectors. A five-time NBA Champion and the 2008 MVP, Bryant tragically lost his life in a helicopter crash in January 2020, just a few years after his retirement.

As for his 2012 Prizm card, a BGS 10 graded copy went for $1025.00 in a February 2020 auction after attracting 50 bids. It should give you some idea of just how popular it is with collectors and investors, especially following his untimely passing. The quote on the reverse notes;

“With another superlative offensive season in 2011-12, Bryant not only became the fifth-leading scorer in NBA history, but he also climbed to second on the all-time list for most points with a single franchise. His 29,484 points for the Lakers trail only the 36,374 that Karl Malone crammed home for the Jazz”.

Given his ability and his overall impact on the sport, it’s no real surprise that his rookie cards are especially popular with collectors.

This year contains the coveted Luka Doncic Prizm RC. The 2018 Luka Doncic Panini Prizm Signatures Gold RC will sell for more than 200k at a PSA 10.

And there ya have it, boys… if you have any questions about the list please email us at info@goldcardauctions.com

Panini Prizm cards have a strong design, allowing them to stand out from the crowd, even compared to other high-end NBA releases that are flooding the market each year.

They’ve slowly become the go-to for the majority of collectors, especially when it comes to grabbing the latest hyped rookie or prospect, or for making an investment in the long term.

Also, feel free to drop into our DMs at the Gold Card Auctions Facebook Page with any questions you might have about Prizm basketball cards or any cards in general (even Pokemon Cards!).