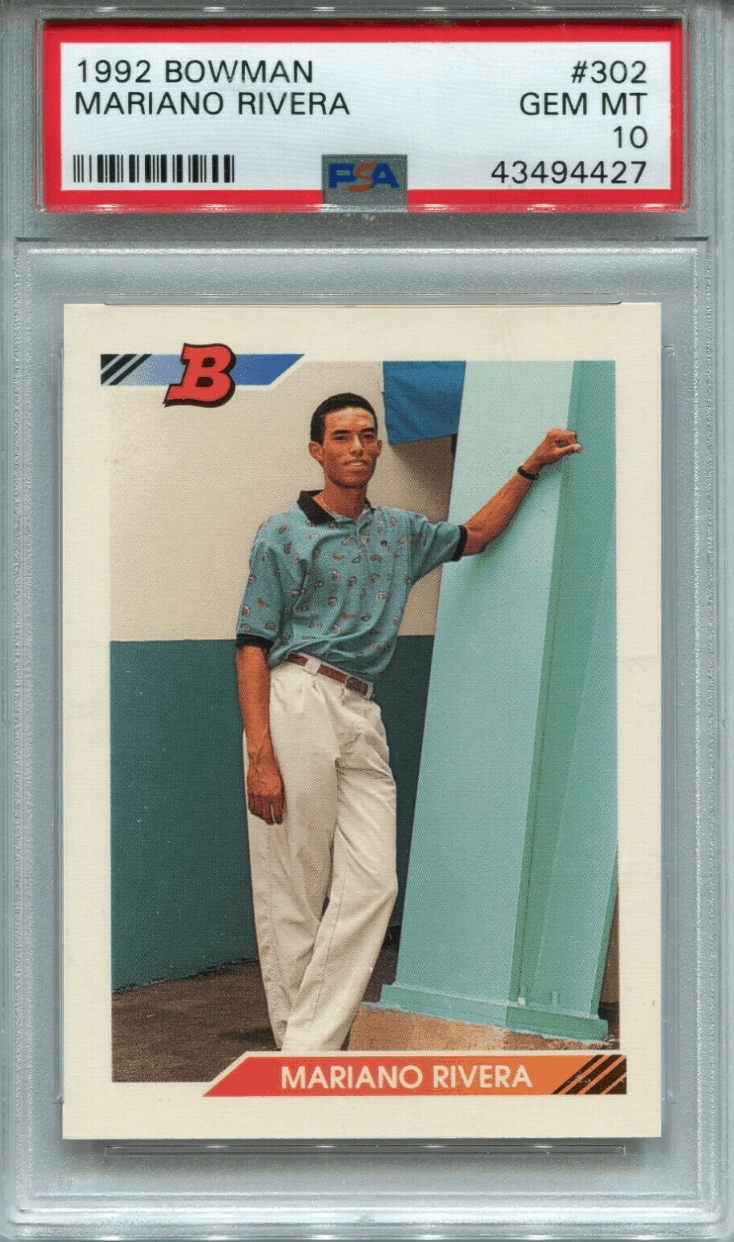 The New York Yankees have been blessed with some of the biggest stars in baseball over the years, although they’ve also been starved of success in recent seasons.

Regardless, the Yankees have won the World Series a record 27 times, and have notched 40 American League (AL) pennants on their way to becoming one of the most recognizable franchises on the planet.

The Yankees have featured in 40 World Series’ overall, with the last coming in 2009. Here’s a trio of the best Yankees’ rookie cards of all time, including career highlights for each player as well as reasons why they made the list.

It’s fair to say that putting Mariano Rivera third in a list of the best New York Yankees’ rookie cards is a slightly controversial decision considering some of the more popular players who haven’t made the cut, but his accomplishments and achievements will easily stand the test of time compared to the others we’ve mentioned.

Seen as one of the best relief pitchers to grace the game, his dominant performances ensured he received 100% of the vote in the 2019 Hall of Fame ballot, becoming the first player in major-league history to be elected unanimously by the BBWAA. It’s a massive deal, and separates him from the majority of the chasing pack. Rivera earned a World Series MVP award as a pitcher in 1999, one of only four relievers to do so in history.

In a career spent entirely with the Yankees, Rivera notched 13 All-Star appearances as well as five World Series wins, capping off the selection by having the AL Reliever of the Year Award named in his honor.

As for his rookie cards, PSA/BGS 10 versions are relatively affordable compared to the other players on our list. A 1992 Bowman Baseball card is seen as his true RC, and can be found for roughly $400 at auction.

Looking back at Derek Jeter’s career through an unfiltered lens, it’s easy to see how he takes the second spot on our list thanks to his longevity and sheer talent.

His numbers alone are impressive enough, with 14 All-Star wins and five World Series championships, which is as many as Rivera managed. Jeter also spent his entire 20-year career with the Yankees, making him a beloved icon for the franchise.

In terms of legacy, he received 99.7% of votes in the first ballot of 2019, with just one person opting against including his name on the list. Unsurprisingly, their identity remains a mystery, such was the shock that Jeter didn’t make a clean sweep at the first time of asking.

In more recent years, he became a part-owner of the Miami Marlins after he and New York businessman Bruce Sherman bought the franchise for an eye-watering $1.2 billion.

Jeter has a wide variety of rookie cards due to how many were licensed during his early years. The majority are priced at under $5,000 for a PSA/BGS 10, so you won’t have to overpay if you want to start your Jeter rookie card collection.

The 1993 SP (numbered #279) is the most popular Jeter rookie card by far, as well as the most valuable by a wide margin. Expect to pay five figures for a BGS/PSA 10 version, which is a massive difference compared to the more humble option we’ve listed above.

The final player on our list has a card that is even more valuable, while his legacy helped to transform the Yankees into the juggernaut they are today.

Possibly the best-known player in the history of the sport, Babe Ruth’s rookie cards are over a century old, and they’re highly sought after as an authentic piece of pre-war baseball memorabilia. The original power hitter, he helped the game to evolve into the more exciting style that we’re more used to today.

After beginning his career with the Red Sox, he left his former Boston side struggling with the “Curse of the Bambino” when he left for New York in 1920. Ruth remained a Yankees player until 1934, and he was a seven-time World Series Champion in the time spent between the two franchises. He played for a total of 22 seasons between 1914 and 1935.

Ruth perfected the art of the home run, and many of his records were untouched for 80 years until Barry Bonds came along to spoil the party. Ruth still holds a number of Yankees’ batting records to this day, in esteemed company with the likes of Derek Jeter and Lou Gehrig.

There was no chance that he wouldn’t make this list, especially when you factor in the rarity of his rookie cards and the massive interest they draw from collectors. A 1916 Ruth rookie card can sell for over $100,000 depending on the condition, and that’s not even the most valuable option available.

The 1914 Baltimore News Babe Ruth card is likely to be the most valuable, estimated to be worth at least $500,000 in good condition just over a decade ago. Of course, there’s more to the best Yankees’ rookie cards than price alone, but it’s hard to argue with an item that is worth over half a million.

Ruth is deservedly top of the list and a clear great of the game. It’s unlikely that you’ll find one of his rookie cards for a discounted price at a flea market, but it’s still the undisputed holy grail of Yankees’ memorabilia.