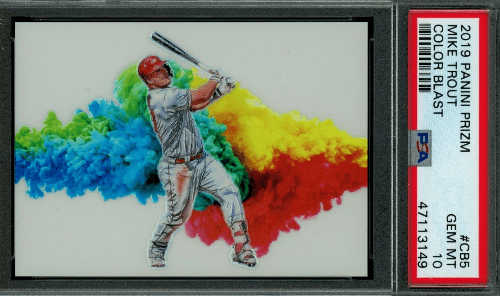 PLEASE NOTE: The Mike Trout baseball cards mentioned on this list do not include any of his rookie cards… see our Best Mike Trout Rookie Cards

LA Angel’s center fielder Mike Trout (08/07/91) is widely seen as one of the greatest players in the history of baseball, despite a relative lack of success with his franchise.

An eight-time All-Star, Trout signed a 12-year extension with the team for $426.5 million in 2019, which was the largest amount of money in a single contract in the history of professional sports at the time.

As such, his cards are some of the best in the business if you’re judging them solely on value alone. His RCs tend to get most of the attention, so we’ve prepared a list with 20 top options from 2013 and beyond.

Here’s a rundown with 20 of the best Mike Trout baseball cards if you’re on the lookout for investment pieces, with lots of info about each card, along with parallels and anything else worth mentioning.

Trout’s RCs are some of the best in the business, causing many collectors to ignore the options that came afterward. However, that doesn’t mean that there aren’t good investment pieces if you know where to look. 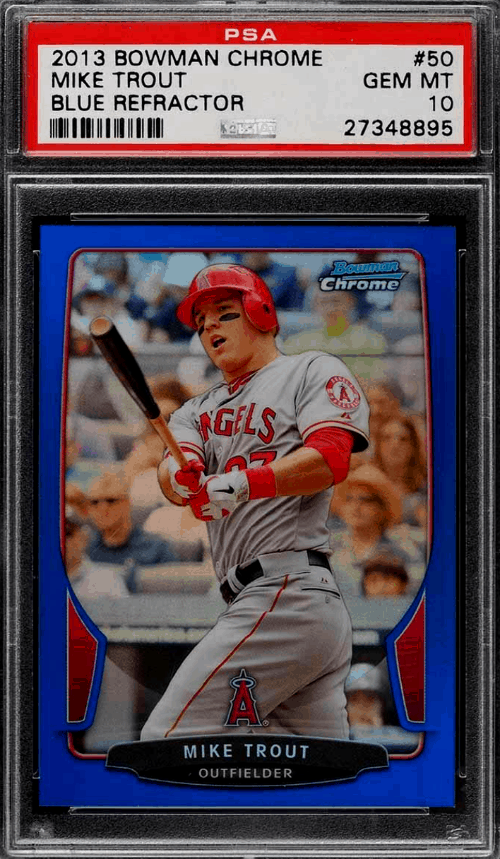 The 2013 Bowman Chrome is where we’ll begin. It’s nowhere near as expensive as the majority of his rookie options, but it does feature a strong image of the player on the plate.

There is a range of refractor parallels, making it one of the better Trout cards from 2013. 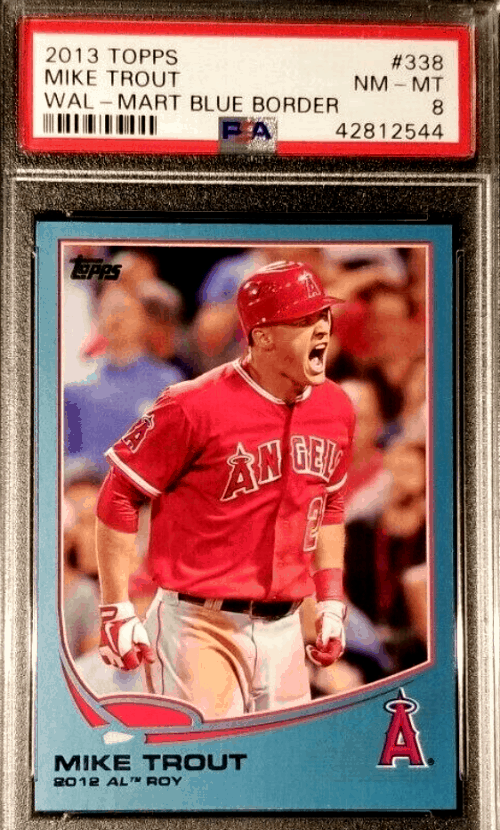 A year after the release of his RC, the 2013 Topps set takes the time to celebrate Trout’s Rookie of the Year award. The #27 card has a trio of image variations, either featuring him sliding along the ground, wearing shades, or signing autographs for fans in the crowd.

They all have a range of slick parallels, so there’s a variety of lower-end investment options to choose from. 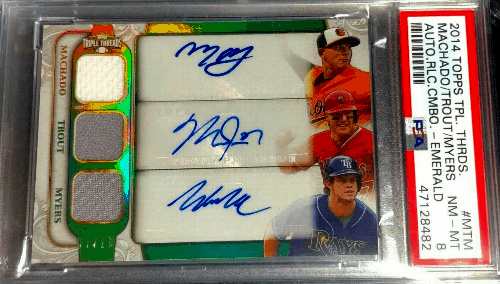 As the name suggests, the Topps Triple Threads set features three players, with patches and autographs for each one found on the front. Manny Machado and Wil Myers join Trout to make up the trio, with each one given a small horizontal segment. It comes with a range of rare parallels which are listed below. 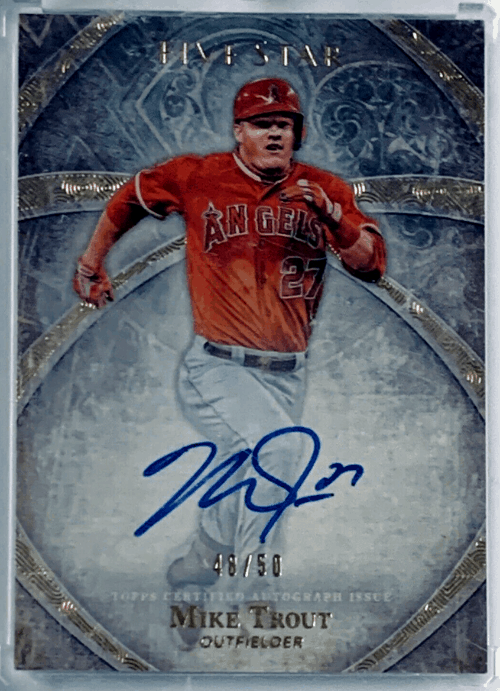 A high-end release, Trout’s card from the 2014 Topps Five Star Baseball set is ideal if you’re looking for more affordable options from the early years.

It features an image of a sprinting Trout, while Rainbow parallels are numbered to just 25 copies. You’ll also find an on-card auto, filled in blue ink. 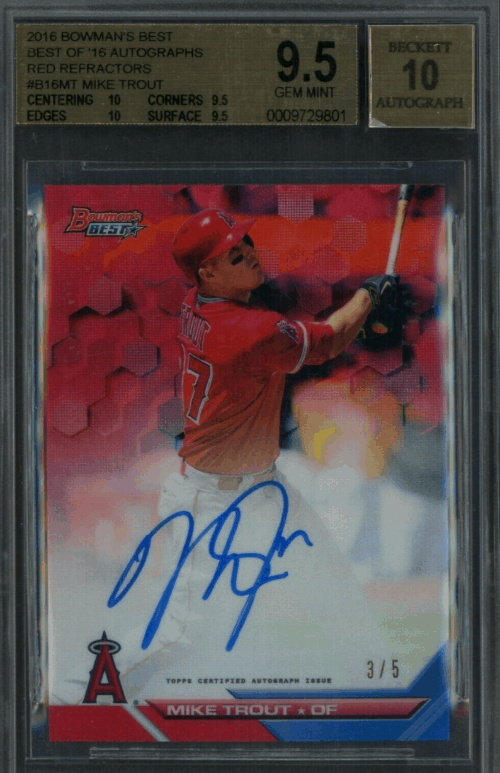 The 2016 Bowman’s Best has a subset focusing on the top players of the year. Of course, Trout makes the cut, as he was named as the AL MVP for the second time that season. It features an action shot of the player on the plate, watching a baseball soar through the sky.

Keep an eye out for the various refractor parallels, which we’ll list below; 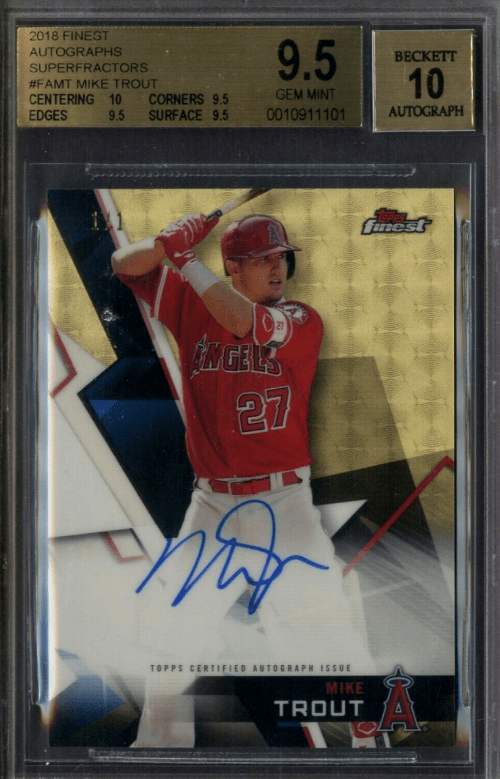 The 2018 Finest release features another strong signed Trout card, with the player shown in a typical batting pose. The set isn’t my personal favorite due to a distracting background design, but that isn’t an opinion which is shared by the majority of collectors.

A range of refractor parallels helps to add interest, as well as contributing to a significant price tag at auction. 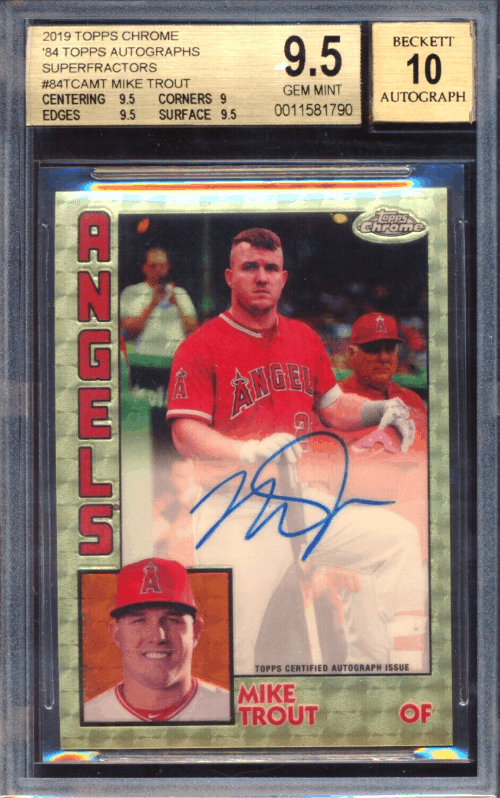 The 2019 Topps Chrome release celebrates 35 years since the iconic ’80s design debuted for the first time. Trout’s card from the ‘84 Autographs subset pays homage, with a vintage look and feel to the text, image selection, and border design.

As well as a posed photo of Trout on one knee propping himself up with a bat, it has a second smaller profile shot in the bottom left corner.

One of the best-looking subsets in recent memory, the 2019 Panini Prizm release contains Trout’s Color Blast. A simple design sees an illustration of Trout swinging a bat, with colored smoke billowing out of either side of the card.

There’s no logos or clutter, and it has a plain white background. From an aesthetic point of view, it’s undeniably one of the nicest cards on the list. Collectors seem to agree, and prices have risen significantly over the past year. 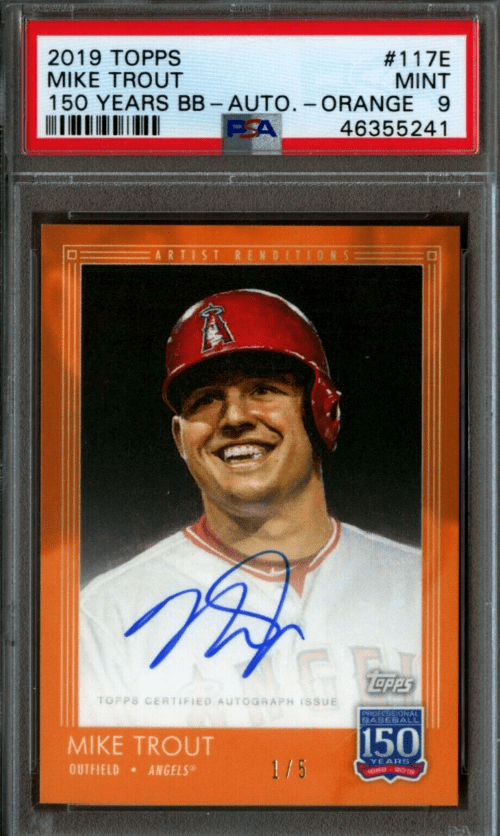 In 2019, Topps produced a new online product, named “Topps 150 Years of Baseball.” This is one such card from the set, featuring an artist’s rendition of a smiling Trout, along with a signature at the bottom on rarer versions.

The blue-bordered edition has a print run of 1,400, but the Orange version is limited to just five copies. It has to be seen as one of the better Trout investment options from 2019. 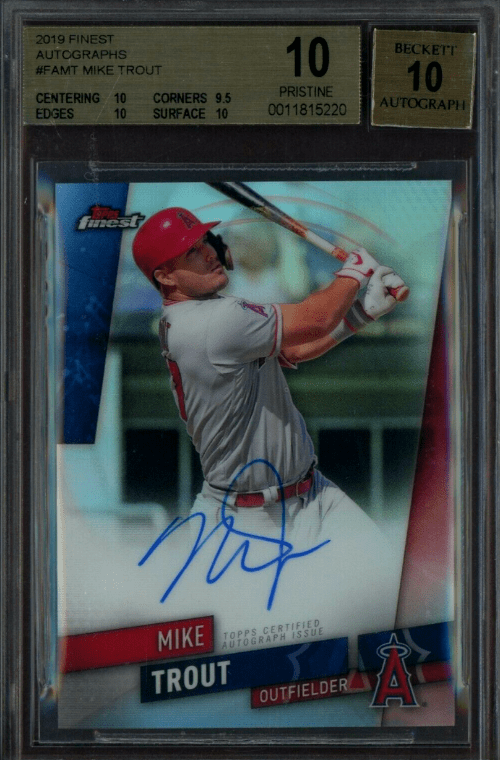 Trout’s card from the 2019 Topps Finest Autographs set is up next. It has a simple red and blue border, featuring an action shot of the player after a successful swing. A large on-card auto is also found in the middle, on a smaller white patch. The best investment pieces are likely to be the colored refractor parallels, and there’s a decent selection to choose from. 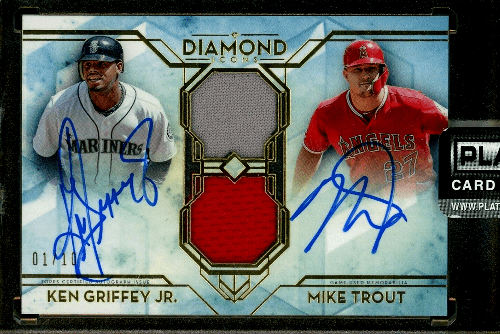 Retailing at $2,000 per box, 2020 Topps Diamond Icons Baseball is pitched as “the high-end collector’s best friend.” Of course, the set features a Trout auto, which has a range of parallels that we’ll list below.

Trending: PSA vs Beckett vs SGC

Red ink variations are also included, making for some of the more popular cards from the collection. You’ll find a serial number in the top left corner, while the card is finished with gold chrome trim. 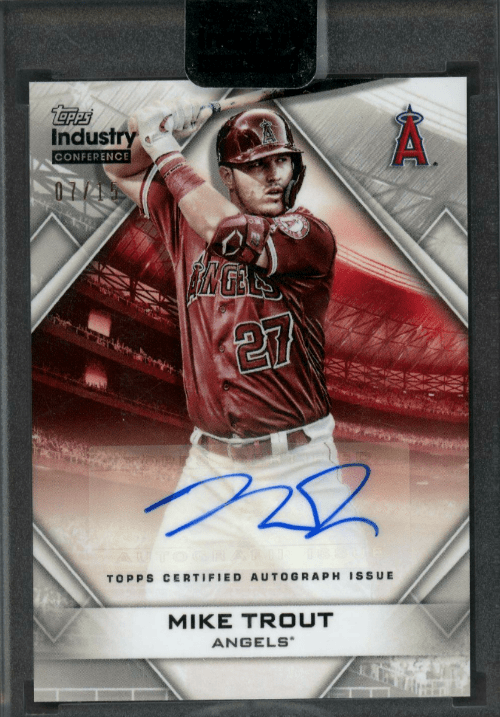 An autographed card that was made exclusively for the 2020 Topps Industry Conference, this is another premium edition that is hyper-rare. There’s a serial number in the top left corner (15), with a white and red motif. However, the autograph is of the stickered variety, which is a letdown for many collectors.

Trout is pictured with a bat held above his head, in a glossy image that has tonnes of detail. 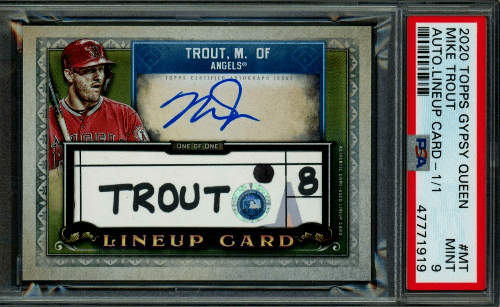 2020 Topps Gypsy Queen Baseball is a retro-inspired set that has a variety of signed Trout cards on offer. The Autographed Lineup Cards Set has a premium one-of-one card featuring the LA Angels player, with a landscape design that also features an on-card auto at the top.

The scarcity means that it’s already worth four figures, but there are other signed Trout cards from the set which are definitely worth checking out.

Next up is a dual autograph card from the 2020 Topps Five Star collection. Trout is joined by Aaron Judge, who is a two-time All-Star who won the AL Rookie of the Year award in 2017.

As the name suggests, there are only five copies available, and there are five chrome stars along the middle. They separate two images of Trout and Judge, with both men standing in a batting stance. It’s one of the stronger signed options, but much depends on Judge’s future if you’re buying it solely for investment purposes. 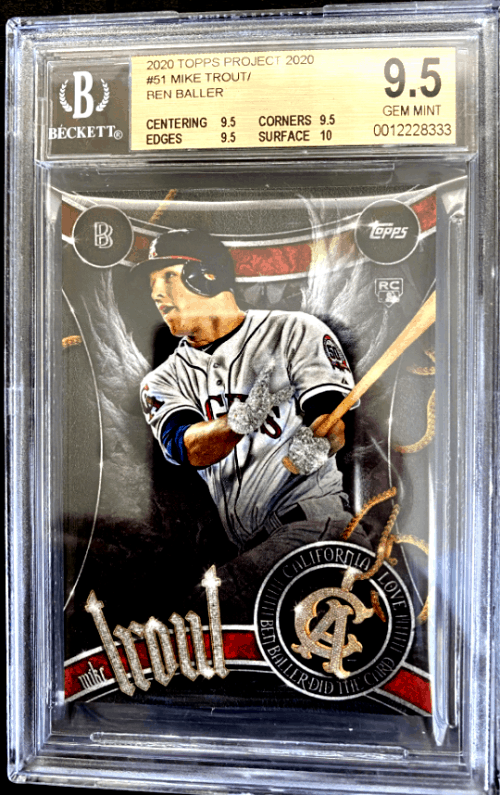 Topps Project 2020 is a release which ‘visually reimagines the baseball cards that have defined generations’, using 20 artists from around the globe to do so. They’ve been incredibly popular with collectors so far, and Trout has a number of cards in the subset.

This is one such version, as jewelry expert Ben Baller aims to improve on the stock image found with Trout’s RC. The card has been polished, with lots of bling added to the front, including a pair of diamond gloves and a chain logo. It’s also signed ‘bbdtc’, which stands for ‘Ben Baller did the card’. 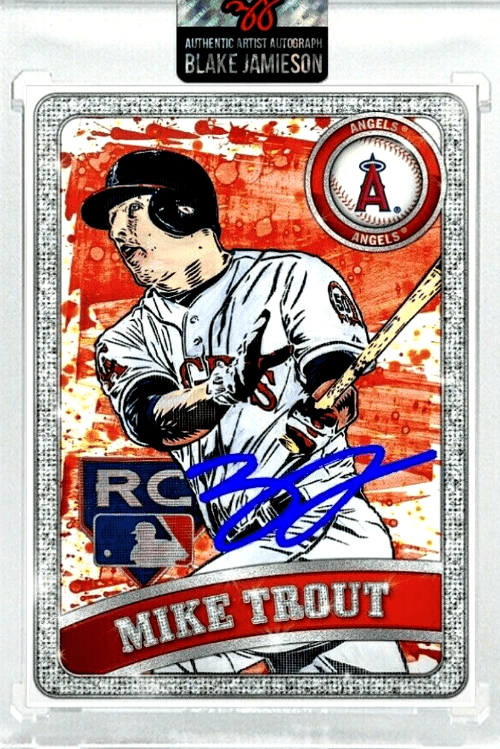 The next card also focuses on a reimagined 2011 Topps Update. This time, it was designed by NY pop-portrait artist Blake Jamieson. There are just ten copies overall, so it’s already one of the more popular options from the Project 2020 set.

The image of Trout is zoomed in, with a massive RC logo found at the base of the card. It almost looks like a comic book image, and that’s a good thing! It’s finished with a diamond border, and it has a red motif. 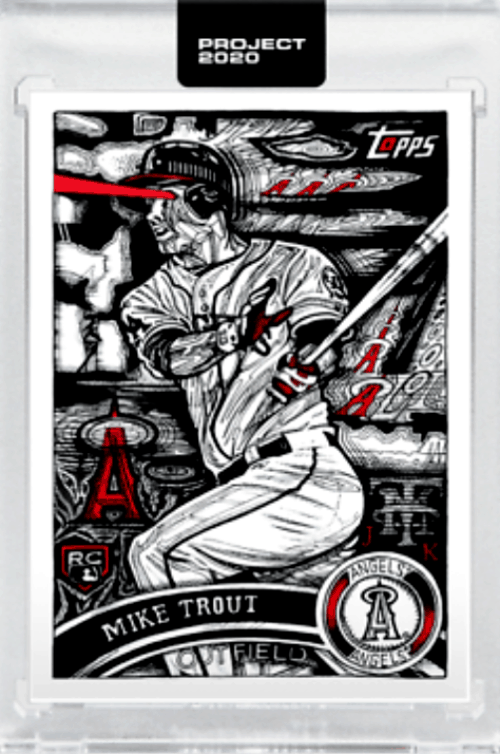 Another card from the Topps Project 2020 set, this version was designed by Joseph Ari Aloi – AKA JK5. Again, the 2011 Trout RC is used as the base card, with a black and red design that sees lasers shooting out of Trout’s eyes.

There are just 59 copies overall, and they’re signed by the artist in gold ink. It’s a bit scary, but it’s another beautifully designed card that offers something slightly different compared to the average Trout card. 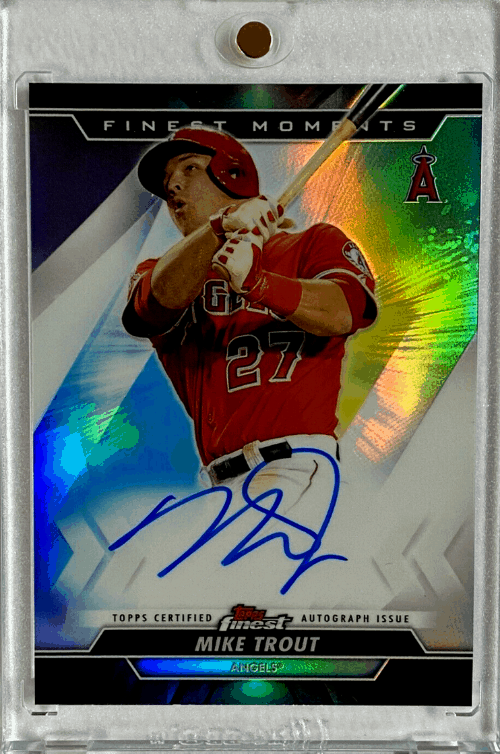 From the 2020 Topps Finest Baseball set, Trout’s Moments Autograph is another strong signed option featuring the LA Angels GOAT. It has an image of Trout mid-swing in the middle, with a signature penned in blue ink which is found at the bottom.

The lined background isn’t particularly interesting, but it has been an early hit with both collectors and investors. 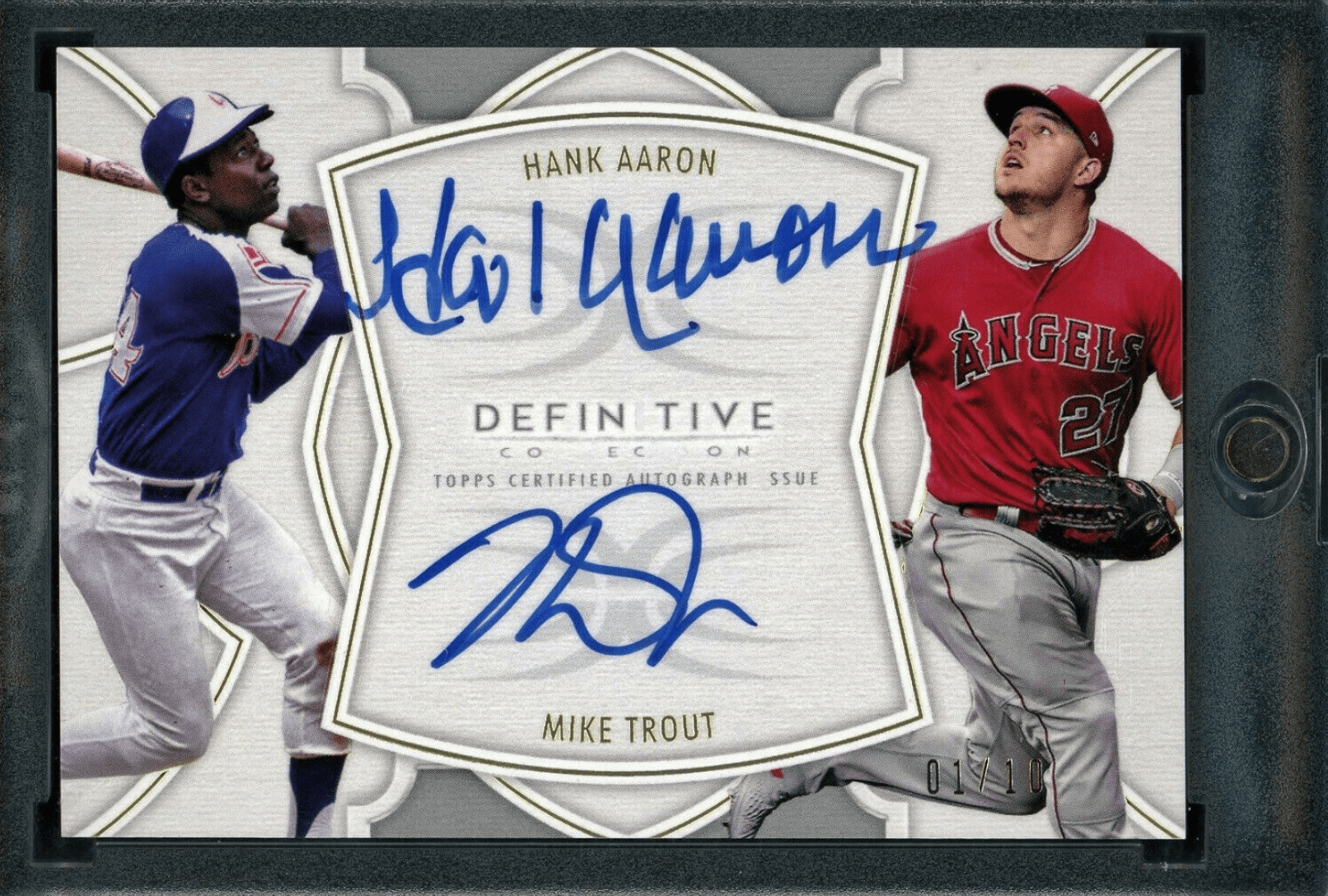 The Dual Autograph Collection is a premium subset, featuring on-card autos from some of the biggest names in the business. Trout is joined by the legendary Hank Aaron, with small images of each player found on either side of the card.

The middle is devoted to a large section for the signatures, which are filled in blue ink on a white background. There’s also a trio of rare parallels that make for a great investment piece, which are listed below. 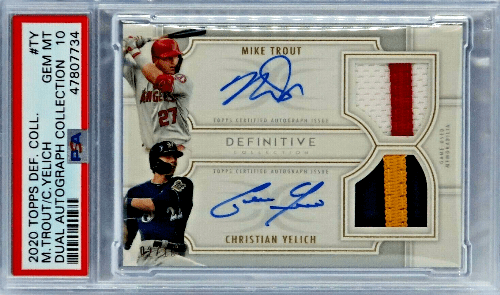 We’re sticking with the 2020 Topps Definitive set for this one. This time, Christian Yelich is the one to join Trout on a dual autograph, which is somewhat similar in design to the card seen above.

This time, the players are both found on the left of the landscape card, which has been split in half to accommodate for a large patch and a signature.