Point guard Luka Doncic (02/28/99) is widely seen as the next big thing in basketball. He was drafted third overall in 2018 and earned the Rookie of the Year award a season later.

Update 2021 June: He is no longer the next big thing. He is the big thing. 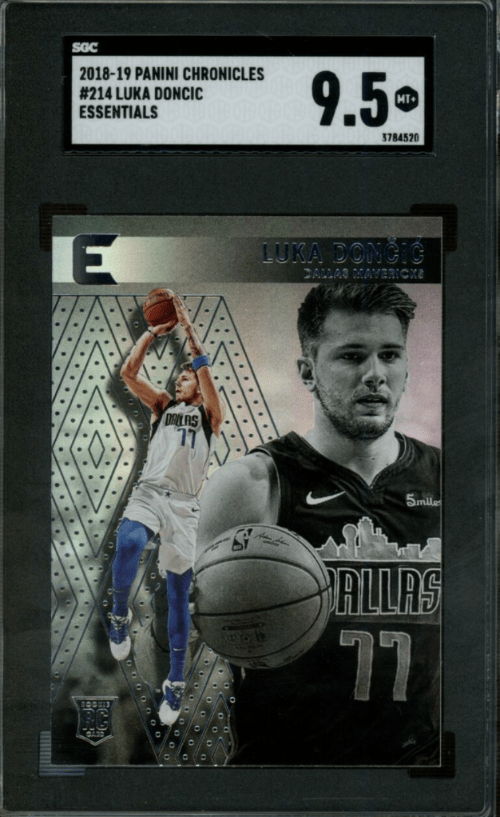 Doncic made his first All-Star appearance in 2020, cementing his position as one of the top young players in the game.

As the best copies of his 2018 National Treasures card are currently selling for upwards of $200,000, we’ve decided to take a different tack when coming up with cards for this list.

We’re looking at five of the best Luka Doncic cards that retail for under $100, with a good chance that they can be flipped in the future.

As we’ve mentioned, the most valuable Doncic cards are probably out of reach for the average collector. However, there are some viable options at the lower end, which we’ll get to below.

The majority of cards to feature are RCs from his first year with the Dallas Mavericks, although there are a number of decent cards from 2019 onwards.

We’ve focused on grabbing the highest grade possible while sticking within the allotted price range. (If you’re looking at online auctions, make sure to keep an eye on the price of shipping!)

You’ll be able to pick up loads of Doncic cards for under $100, but what will they be worth in a year or two? 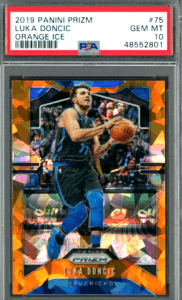 This by far the best-looking Luka card on the list and also one of the cheapest. This bad boy recently went for around $200 at a PSA 10 grade!

All of the 2019 Luka Doncic Prizm Parallels are dope-looking but the orange is the best. 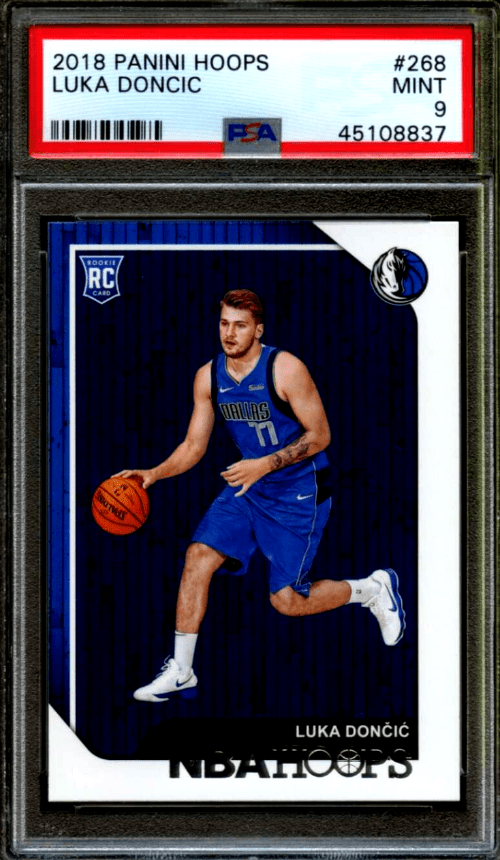 We’ll start off right at the limit. The 2018-19 Panini Hoops is a great Doncic RC, with a blue color scheme that meshes well with his Mavericks jersey. It features an action shot of the player on the court, with a ball held in one massive hand.

At the current time of writing, an SGC 9.5 graded card will sell for exactly $100 at auction, give or take a few bucks. It’s a solid investment piece and makes for a great entry-level option if you can get it for the right price.

With a PSA 9 copy recently selling for $99, this is another card at the upper end of the scale. However, the 2018 Panini Chronicles is an eye-catching option, with a couple of shots of Doncic found on the front, as well as a silver chrome finish.

The picture on the left sees him leaping up to shoot, while there’s a larger black-and-white profile image on the right, showing Doncic in profile.

His name and RC logo are included in the chrome finish, and it’s one of the better options you’ll find at the entry level. 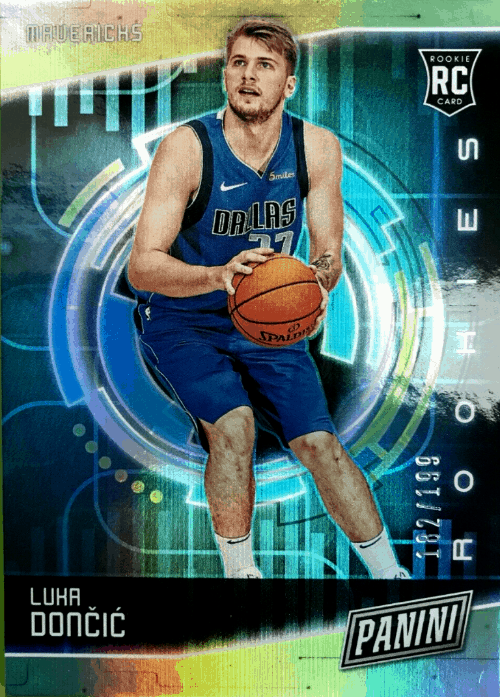 The 2018-19 Panini Cyber Monday set contained exclusive cards for those who opened select Panini releases at the time. The cards were packaged along with 2017-18 Opulence Basketball and 2017-18 Vanguard Basketball sets, depending on how many boxes or cases were ordered.

Doncic is included in the set, in an RC that features the Mavericks star with the ball in his hands. The background is a weird circle which is slightly distracting, but there’s a large RC logo and a serial number located on the front of the card.

There are just 199 copies overall, and it’s a reasonably condition-sensitive piece. It has the potential to increase in value and is possibly the best pick overall. 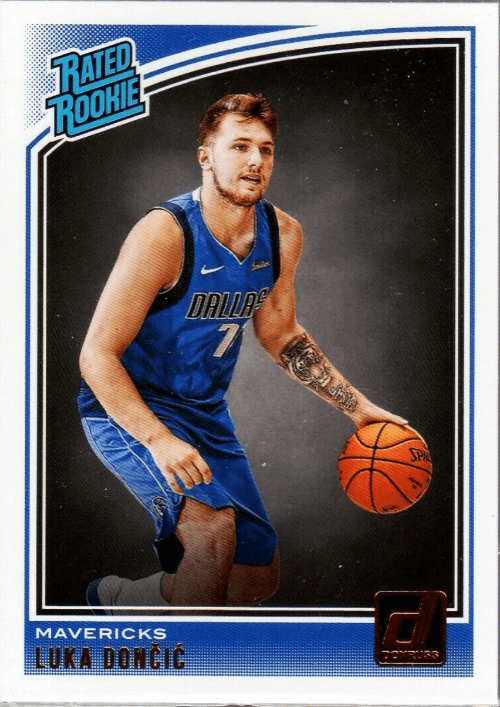 One of the more popular Doncic cards you’ll find is from the 2018 Donruss Rated Rookie release. We’re looking at the base card, which features a simple image of the player as he dribbles with one hand. A minor flaw is that the background is fairly nondescript, although it does have a blue border that matches his jersey color.

You’ll find a ‘Rated Rookie’ logo in the top left corner, while his name and the Donruss logo are finished in chrome. 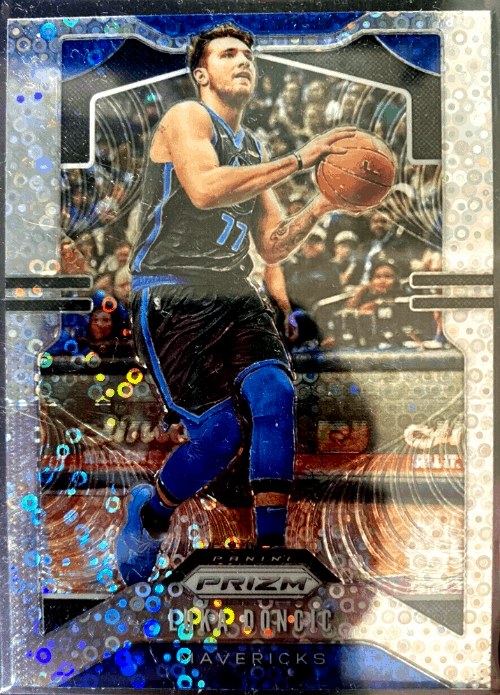 The Silver Fast Break parallel from the 2019 Panini Prizm set is the final card to round out the list. We found an ungraded copy that sold for $89, coming in well within budget.

As always, it has a unique border design, while it shimmers thanks to the chromium background.

Doncic is pictured as he begins to shoot, with his eyes looking up towards the backboard.

It might not be an RC, but it’s a popular Doncic parallel that has the potential to do well if he notches another All-Star appearance in 2021.

As you can see from the list, there are a variety of popular options that can be found for under $100.

Investment Rating: Superior Buy (5 out of 5)

They might not be as shiny as the rarest parallels and inserts on the market, but there’s good scope for profit depending on how Doncic performs in the future.

On the other hand, many Doncic cards aren’t worth anything, so take care when selecting which of his cheaper cards to invest in.

The sets seen above contain some of the better entry-level pieces, even if they’ll neve match up to the 2018 National Treasures, or other premium cards