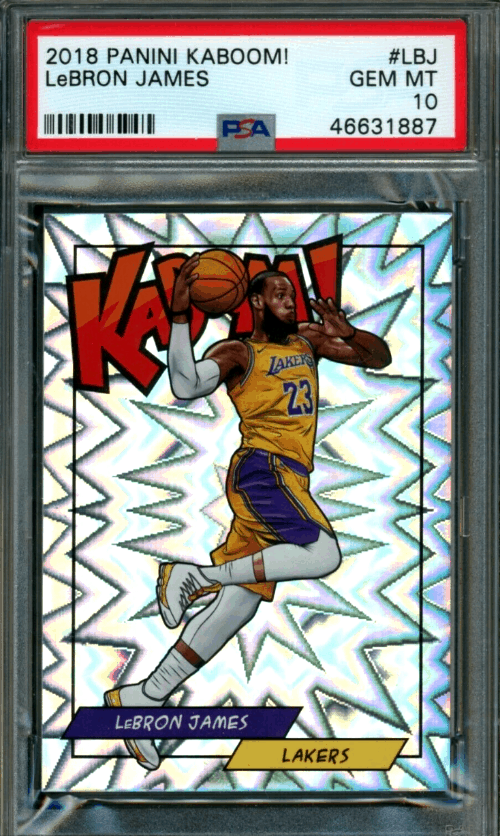 LeBron James is one of the greatest basketball players of all time and has undoubtedly already cemented his name in history. The small forward has now won 4 NBA Championships with 3 different teams, remarkably being named the game MVP in all 4 games. His recent finals MVP award with the LA Lakers made him the first player ever to win the award with 3 different franchises.

Bryant has also been named NBA MVP an impressive 4 times, being one of just 5 players in history to achieve this feat. The 2003 first overall draft pick has played in every NBA All-Star game since 2005 (a total of 16 consecutive years), taking home 3 All-Star game MVPs in the process.

James signed for the Lakers in 2018 as a free agent after opting out of his Cleveland Cavalier’s contract. His first season possibly did not go quite how he would have hoped, with his Laker’s team failing to make the playoffs whilst he missed multiple games with a serious groin injury.

However, this turned around spectacularly in the 2019-20 season. Not only did he lead the team to the playoffs, but they won the finals series in 6 games against his former side Miami Heat. James’ also led the NBA in assists for the first time in his career with a very impressive 10.2 per game alongside averaging 25.3 points per game himself. 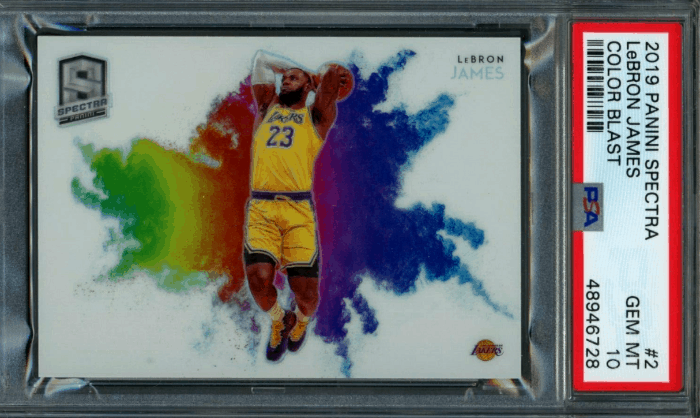 This card has a simplistic beauty to it. It is horizontally printed and features James in the dead center of the card mid dunk. He is wearing the yellow Lakers uniform and is on top of a ‘blast’ of colors that really make the card pop. All of this stands out even more because of the white background.

This card was released as part of the Panini Spectra set but is not really a parallel as it is a completely unique design compared to others in the set. These cards had a limited run of just 25 making them one of the rarest unsigned LeBron James Lakers card on the market. In addition to this, Panini made this card for just 25 of the league’s best players which makes it even more desirable. 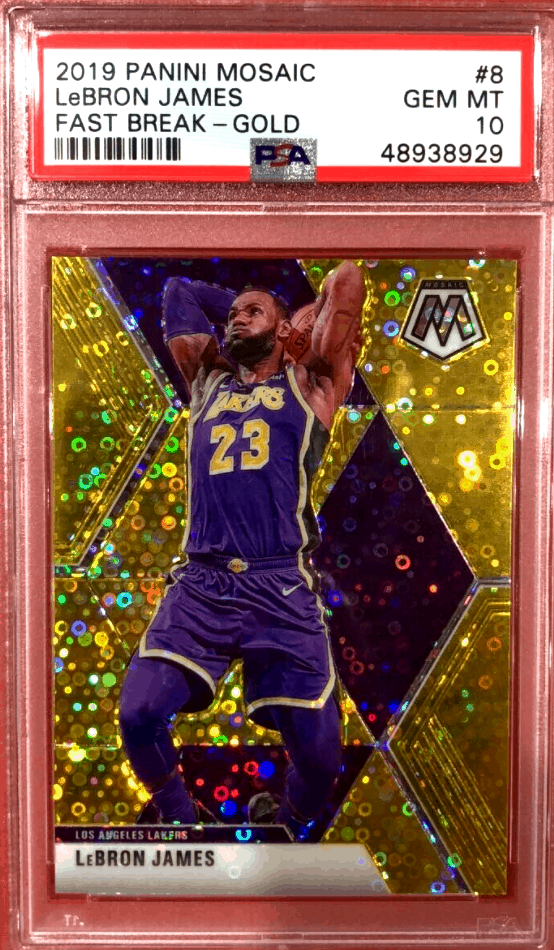 This card features James, again in his iconic purple LA Lakers uniform, in full swing with the ball behind his head. Satisfyingly It features James as the undeniable central focus of the card, with his image taking up most of the space. The background of the card is split into ‘diamond’ shapes, with a strip of diamonds going down the middle in classic Lakers purple and the rest of the background in sparkling gold, giving this parallel its name.

There were just 10 copies of these gold parallels printed making them an extremely rare find. The rarity, pleasing design, and panini name give the card a high valuation of around $10,000.

Whilst $10,000 might be out of budget for most collectors this card has a lot of parallels with a varying degree of rarity and therefore a varying degree of value. The most common, and non-serial numbered silver fast-break parallel can be picked up for around $300 in mint condition.

For those on a lower budget who desire a serial number, there is blue, purple, and pink parallels that had print runs of 85, 50, and 20, respectively. The most common blue parallel can be pick up for between $1000 and $1500 dollars.

Interestingly, there is also a ‘black’ card that is 1/1 and has not been seen on the market but would go for a considerable fee if it is in mint condition. 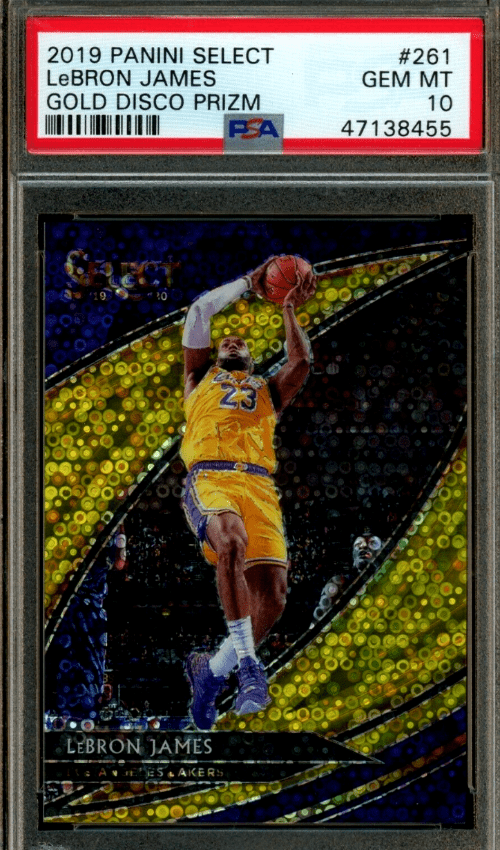 This is a very nice-looking card that features James in mid-air holding the ball in both hands wearing his gold LA Lakers uniform. James is playing in front of what looks like a packed NBA crowd which can be seen centrally in the background. There is a nice wavy border that features Lakers purple in the extreme top left and bottom right corners, with strips of gold just inside of these. The card is rounded out with a chequered Prizm pattern giving it a unique look.

This particular card is from James’ first NBA title season with the Lakers so has a lot of potentials to increase in value in the future. The value of this card seems to be particularly volatile at present with cards in the exact same PSA 9.5 condition selling from anywhere between $2,000 and $11,000 in recent months. In reality, the true value is probably somewhere in the middle around the $6000, so if you can pick one up for less it would be a good investment.

There are 4 direct parallels to this card, the more common ones are red and blue with print runs of 49 and 25 respectively, which will accordingly have a lower valuation. There are also two rarer parallels that are yet to be seen on the market, the green which has 5 copies and a black which is 1/1, likewise these cards will have a higher valuation when they eventually crop up.

As is usual with panini sets in recent years there is a lot of different subsets of this card all with their own parallels and valuations, and some detailed research should be done to find out which ones hold true value. 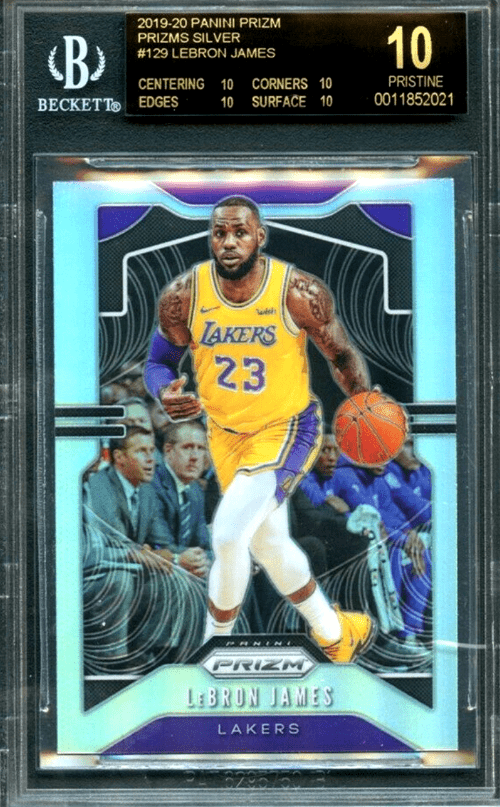 This card features James dribbling in his gold and purple Lakers uniform (considered the first LeBron James Lakers card). Uniquely, the coach’s bench can be seen in the background which is a nice touch that you do not see on many cards. The whole card is encased by a nice silver refractor border which rounds off the card nicely.

These cards seem to be less rare than others on this list which lowers the valuation slightly but that may just mean it is a great opportunity to get your hands on a piece of Lakers and NBA history! In mint condition, they are valued at around $1000 to $2000 and can often be picked up at the lower end of this. They find their way on to auction sites regularly so be sure to keep an eye out.

Again, there is an extensive parallel list, but the base version of this card could be a very exciting prospect for a newcomer to the trading card collection game. They are identical except for the border which is white instead of refractive and can be picked up easily for just $20 making them a perfect card for someone just starting out!

This set of cards is very different from most others, it portrays the athletes on them as superheroes in a comic book style. James’ version of the card features him celebrating in the air with the ball in his right hand wearing the gold Lakers uniform. The image of James is in a drawing style in keeping with the card theme on top of a silver ‘explosive’ background.

The LeBron James version of the card was released in 2018 so it is one of the earliest cards that feature him as a Lakers player, and also had a very limited print run of just 50 base cards. This card in PSA mint 10 conditions recently sold at auction for just over $6,000 and this is probably an accurate representation of the card’s true value.

Additionally, there are two parallel cards that are rarer. The gold had a print run of just 10, whilst the green version is 1/1. The two parallels have a slightly different ‘drawing’ of James and are on gold or green background, respectively. These cards have not been seen on the market in mint condition, but it is safe to say they would be worth a lot more than the base version. 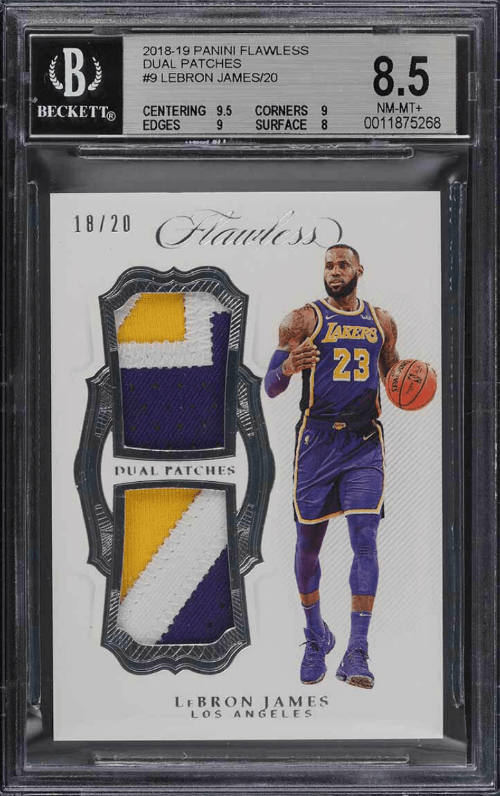 Sometimes you see a card and just think, wow! This is one of those cards. It features a full-body shot of James on the right-hand side in his purple Lakers uniform, holding a ball. There is two separate patches of came worn uniform inserted on the card on the left. As usual with the ‘flawless’ sets this is all set on a perfectly white background with classy gold writing.

There are a few reasons this card is so special. Firstly, the flawless branding always ages well if the card is kept in good condition and is as close as you get to a certainty to gain value with age. Secondly, the card is from James’ first season as a Laker and the patches will be some of the first, he ever wore for the famous franchise. Finally, the printing run was limited to just 20 making the card extremely rare.

A mint 10 copy of this card was recently listed on eBay for a whopping $25,000. This may seem high to the typical collector, but when you consider a 2003 rookie copy of the same card sold for nearly $2 million a few years ago it could be a very shrewd investment. 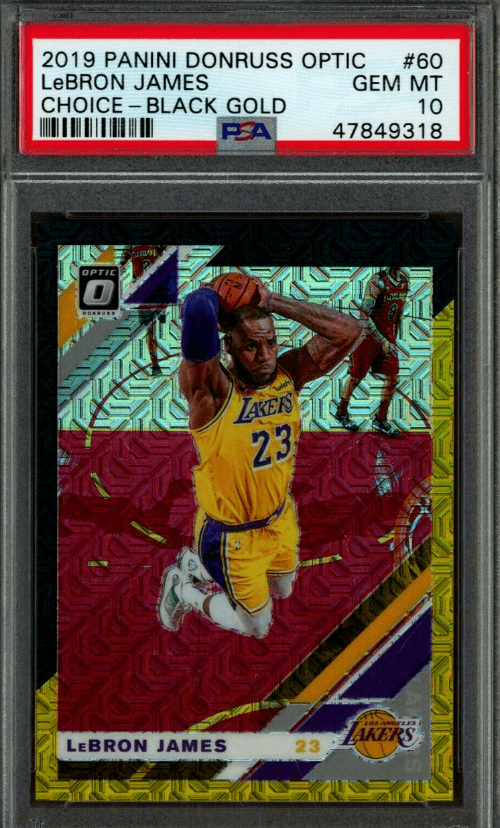 This card features a nice picture of James on the court in full flight looking like he is about to dunk. He is again wearing his gold Lakers and purple uniform. This parallel has a half gold and half black border, with the black featuring in the top left and gold in the bottom right. In terms of looks, it is tidy but unremarkable, and it is the rarity and name of the card that really gives it value.

The card had a print run of just 7 and the set has long been a big favorite amongst collectors. When listed on eBay at the end of August it sent collectors into a frenzy and it eventually sold for over $13,000. This almost certainly will have been collectors trying to get ahead of the curve, trying to snag themselves a rare card before valuations really start to rocket.

For those who do not have $13,000 lying around the red parallel provides a very attractive option. This card contains the same cool shot of James flying through the air but has a red border instead of the red and black outline which actually looks better. It is also serialized with a print run of 88, so is rare enough to have value and can be picked up currently for around $500.

LeBron James LA Lakers cards are currently about as close to a 10/10 (although not 10 because nothings guaranteed!) investment prospect as you could ever hope to get. With James still being an MVP candidate in a now successful LA Lakers team, his list of team and individual achievements with the Lakers will undoubtedly continue to grow and with it his trading card value.

Even looking past James’ playing career everything points at valuations going upwards. Typically,