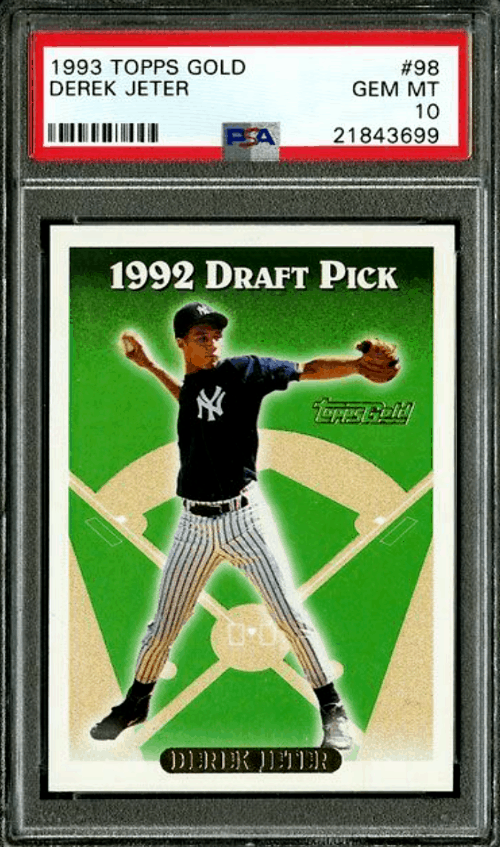 Derek Jeter (06/26/74) is a legendary New York Yankees shortstop who won five World Series rings during half a decade of dominance in Major League Baseball.

Seen as one of the greatest Yankees players of all time, Jeter is also a 14-time Major League All-Star, amassed five American League Gold Gloves at short, won five Silver Slugger Awards, picked up two Hank Aaron Awards, and was the 2009 recipient of the Roberto Clemente Award.

We’ve come up with a list containing 10 of the best Derek Jeter baseball cards, including a number of solid investment options.

This list contains 10 of the best Jeter cards, from RCs to the latest releases from 2020.

We’ve listed the cards in order of the year they came out, so we’re starting off with a rookie card from 1993.

The 1993 Topps Gold might be ignored in favor of more popular Jeter RCs, but it’s still one of the better options from his rookie year. It’s similar to the base version in all respects, aside from a gold hologram on the front, which is how it earns its name.

The card has a simple image of the player, alongside a green and white background which is supposed to resemble a stadium. 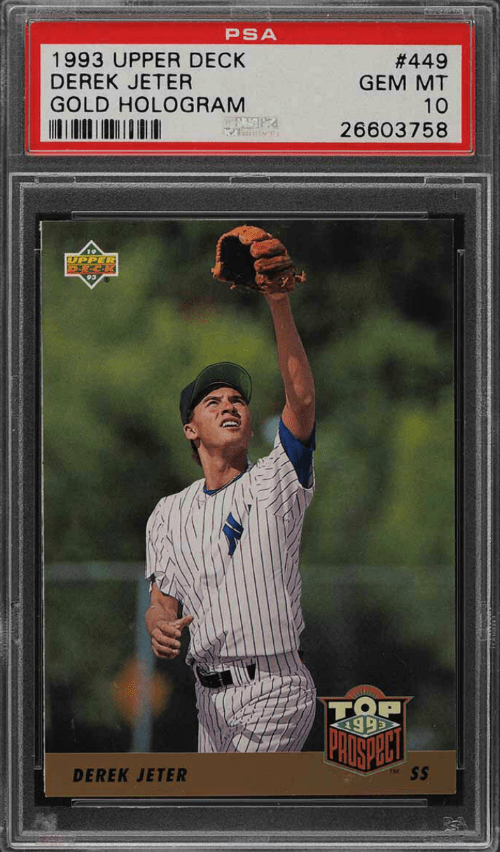 Another Derek Jeter RC, the 1993 Upper Deck is a great release. It has a solid image of a young Jeter holding an outstretched glove, with greenery making up the background. It has a small gold tab at the bottom which lists his name and position, and gem mint versions are worth a fair amount.

All four of the corners are colored, so it’s another condition-sensitive RC that fetches a significant price at auction. 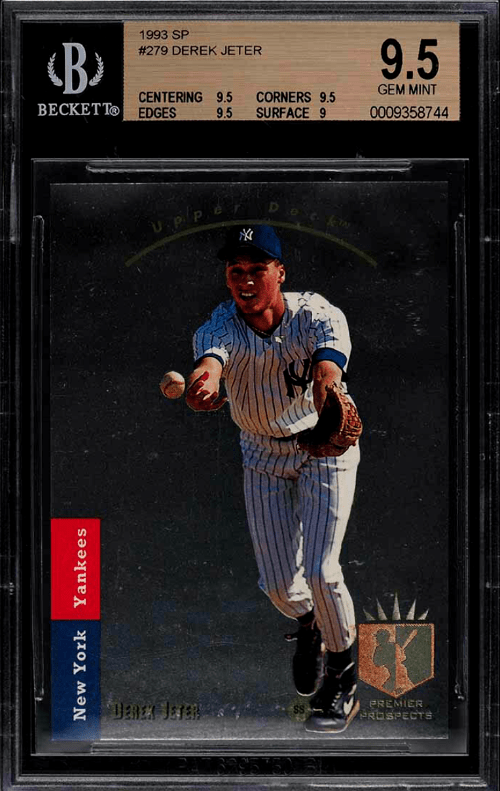 Next up is the big one. The 1993 UD SP is one of the most important collectible cards from the decade, belying the large print run to become astonishingly valuable when looking at gem mint copies.

At first glance, it’s a simple card, featuring Jeter primed to make a catch. The value derives from the foil finish, which could easily be damaged when pulling the card from a fresh pack. Of course, this has led to crazy prices, and PSA 10 versions will sell for six figures. 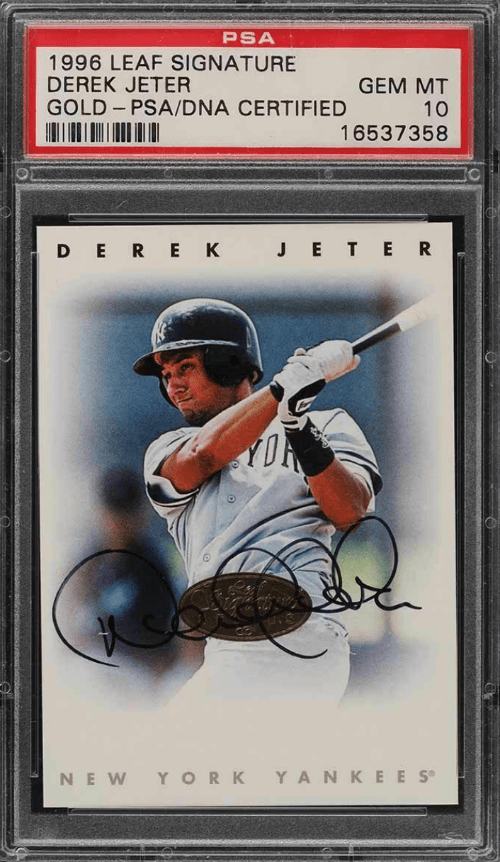 One of the more popular cards from the 1990s, Jeters ‘96 Leaf Signatures comes in either bronze, silver or gold. Common autographs have a bronze medallion on the front, so you’ll be able to tell the difference easily.

As well as an action shot of Jeter at the plate, the addition of an on-card auto is enough to catch the eye of many collectors who are interested in his earlier options. The bronze version is also recognized as an SP, although there are 700 copies overall. 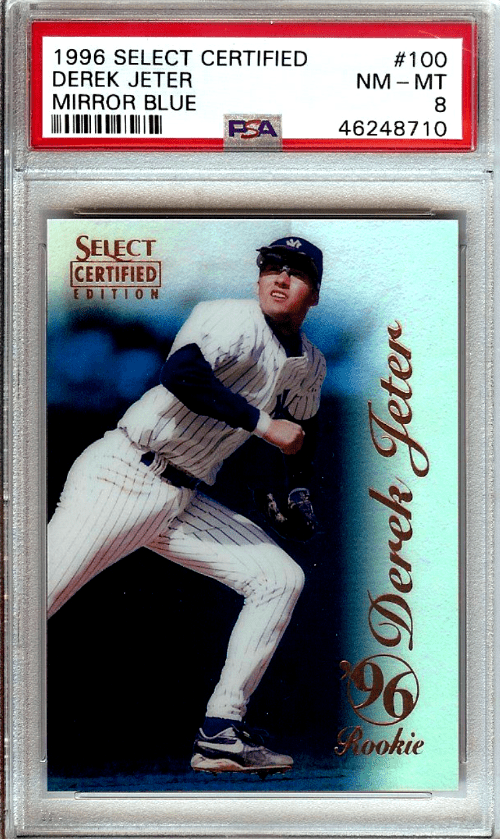 The 1996 Select set is best known for the low print run parallels, of which there are six to look out for. It proved to be a popular move, as it allowed collectors to go after the rainbow.

As such, Mirror Red, Blue, and Gold versions are pretty expensive, as they have print runs which number to 90 and under. The parallels change the background design color, and they all come with chrome trim. 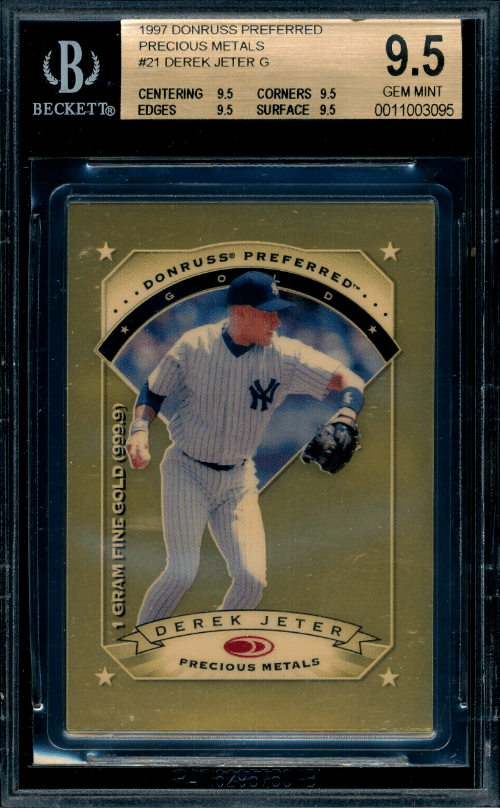 Another stunning Jeter card is found within the 1997 Donruss Preferred Precious Metals set.

The 25-card set is a partial-parallel, and each is printed with one gram of silver, gold, or platinum embedded into the card. Only 100 copies were ever produced.

Jeter’s gold card is a big hit with collectors, featuring an image of the player with a baseball in hand, with light gold trim. 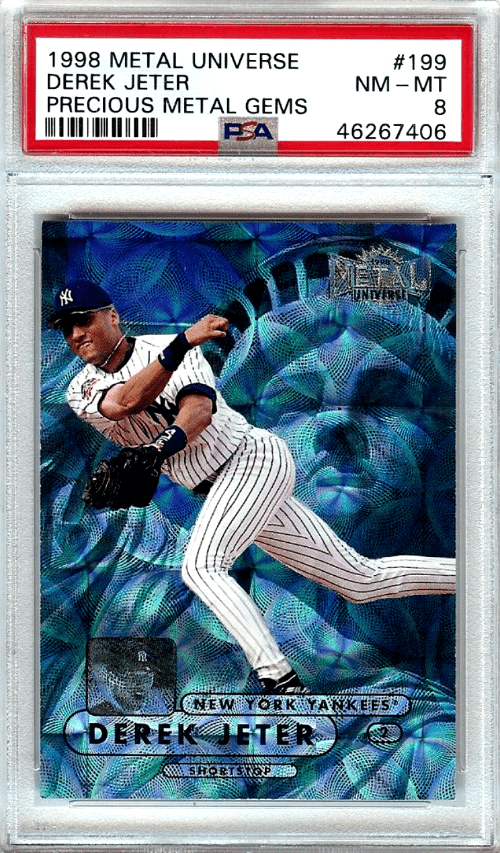 We’re sticking with the Metal theme for the next card, which is from the 1998 PMG set. It features an action shot of Jeter on one leg, leaning forward while making a throw. They’ve opted to focus on NY for the background, as the Statue of Liberty looms over his right shoulder.

Must Read: Best Sports Cards to Invest In Now

There’s also a second, smaller image of Jeter in the bottom left corner. It’s another condition-sensitive option that is pricey at higher grades, which is understandable as it’s limited to just 50 copies. 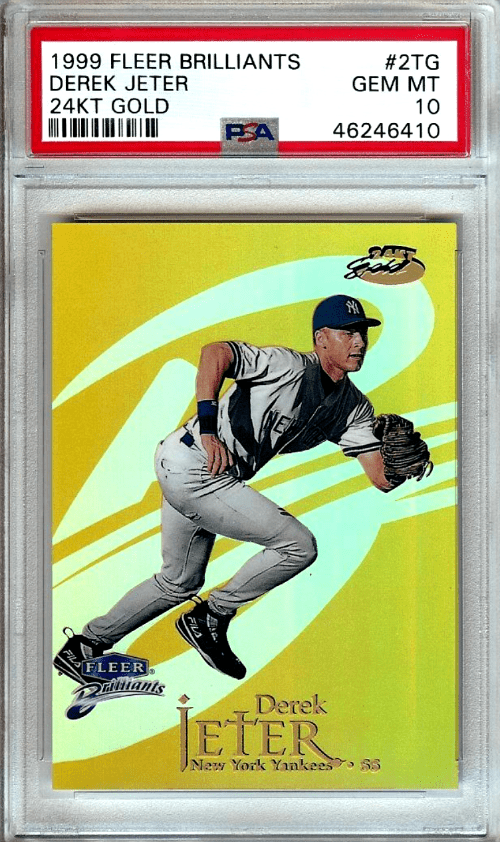 The next Jeter option is from the 1999 Fleer Brilliants release. As a ‘24 carat gold’ card, it’s easy to see how they decided on an overall design. Jeter is pictured in a full sprint, with a bright yellow and gold background.

There are only 24 copies, and it comes with a chrome gold trim. It’s a rare option that is highly condition-sensitive, so gem mint copies will come at a high premium. 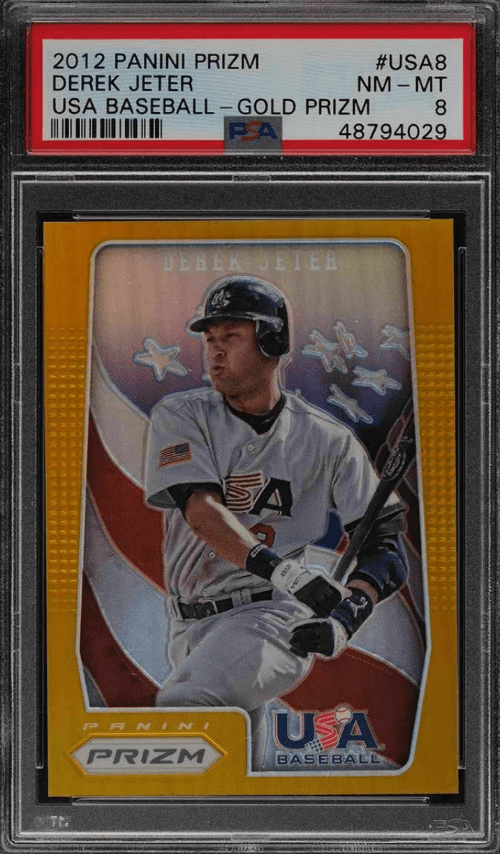 Rather than the base 2012 Panini Prizm set, we’re looking at the USA Baseball collection instead. You’ll find the stars and stripes behind an image of Jeter batting, along with a Panini Prizm logo at the bottom.

The Gold parallel is numbered to just ten copies overall, while he’s wearing a Team USA uniform, instead of his typical red Angels gear. The base edition is pretty affordable, but the same can’t be said for parallel versions. 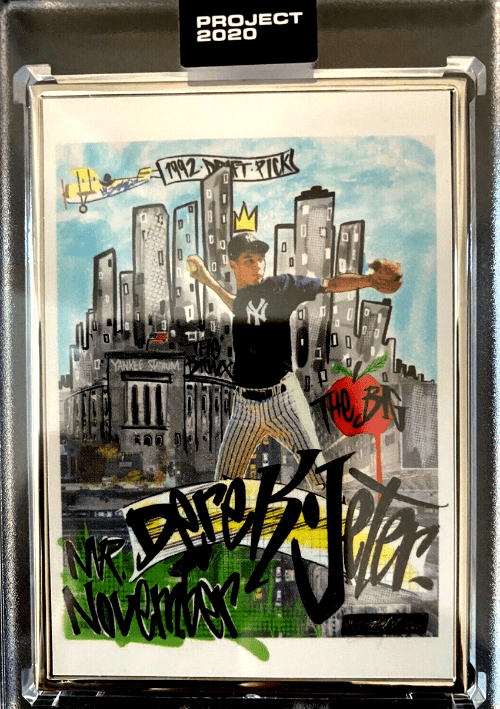 The most recent card to make the list is from the Topps Project 2020 set. It focuses on reimagining some of the most popular cards from the past, using ‘culture-defining’ artists to do so.

LA’s Gregory Siff worked on this card, which uses the 1993 Topps as the basis for the design. Aside from the image of Jeter, everything has changed in this black and white refresher, which looks like it was doodled overusing a thick black pen. There are just 20 copies overall, and it’s of the more unique Mr. November cards to make the list. 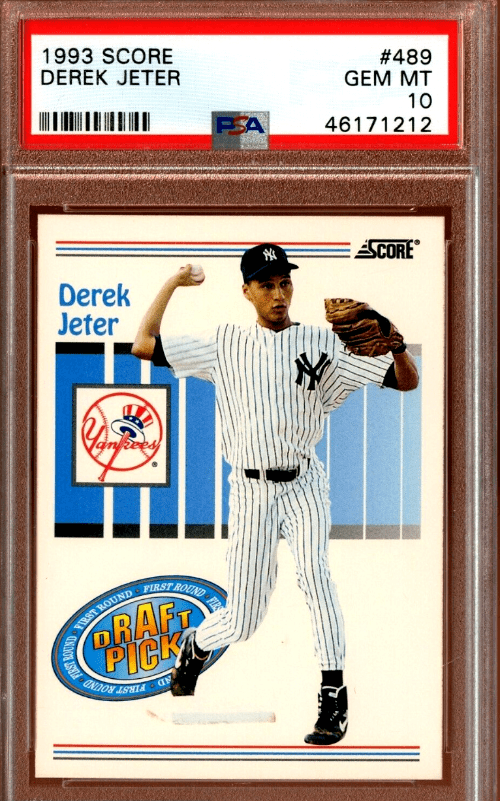 A complete Derek Jeter baseball card checklist would take days if not weeks to complete… so we are going to list the Jeter cards we feel are worthy of an investment if you are looking to add some Derek Jeter to your investment portfolio. 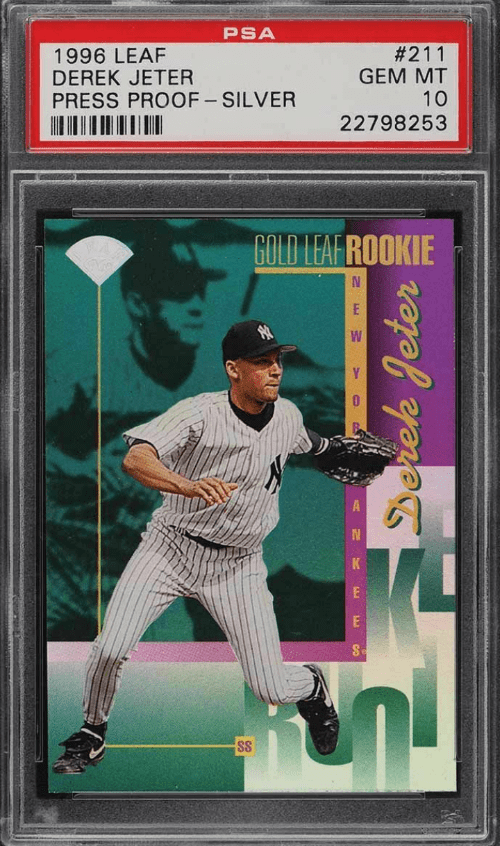 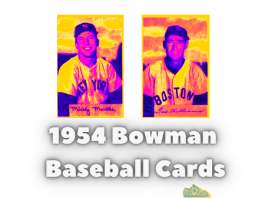 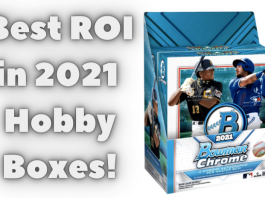 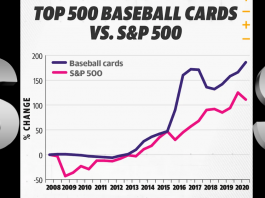