Bowman Baseball Cards is as American as Cherry Pie and Fireworks on the 4th of July.

Founded in 1927 as the Bowman Gum Company, kids would receive a baseball card with their gum purchase.

Some of the most legendary Bowman baseball cards include the 2009 Mike Trout Bowman Chrome Gold Refractor RC, the 1951 Mickey Mantle Bowman RC, and the 1989 Ken Griffey Jr. Bowman Tiffany RC.

*Started as the Bowman Gum Company in 1927
*Founded by Jacob W. Bowman
*Based in Philadelphia
*Acquired by Topps Baseball in 1956 and now operates baseball cards under the “Bowman” name, after resurrecting the brand in 1989

Let’s check out the top-rated Bowman Baseball Cards for investment purposes. These bad boys should have great ROIs year in, year out… cheers! 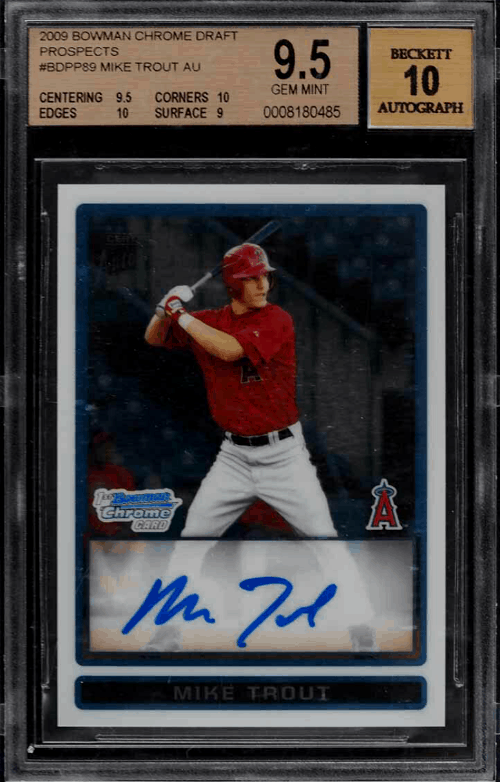 #DRIP4YEARS #EYECANDYx100 #DROPTHAT$$$… hashtags alone cannot describe the 2009 Mike Trout Bowman Chrome rookie card and how coveted it is among collectors. This card is on the bucket list of just about every high-end collector we talk to.

Numbered #BDPP89 the card shows a young Trout at-bat looking to take the ball out of the park or simply slap it down the third-base line for extra bases.

His name and auto are centered at the bottom while the Angels Logo is placed at the center-right.

The Bowman Chrome Logo is opposite the Angels Logo. If this bad boy appears on eBay auctions and you have the wallet for it… BUY BUY and BUY! 🙂 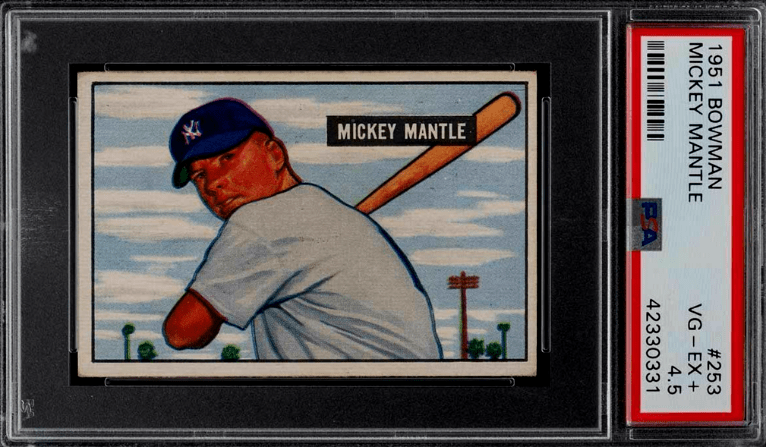 The 1951 Mantle Bowman Rookie Card is second to only the 1952 Topps Mickey Mantle Card in terms of Mantle baseball cards. The 51 Bowman is one of the most legendary baseball cards ever printed and thousands of baby boomers had this card only to have their mom or wife throw it in the trash along with all of their other cards (or so the stories go)… only the lucky few managed to hang on to the card and now it is worth hundreds of thousands of dollars in high grades (this card will push one million very soon).

Numbered #253 the card features Mantle with his bat slung over his right shoulder and a beautiful blue sky backdrop.

His name (Mickey Mantle) appears in a simple style black box with the letters in white… it’s so simple a card yet so complex at the same time… another white whale Bowman baseball card that we hope to someday get our hot little hands on. 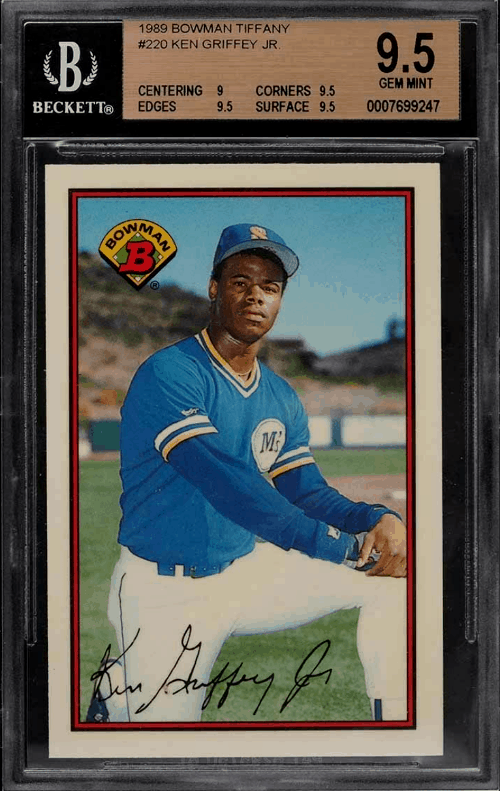 This list would not be complete if we did not include the classic Ken Griffey Jr. Bowman rookie card.

We all know the 1989 Ken Griffey Jr. Upper Deck rookie card is THE CARD for kids growing up in the 80s and 90s but these same kids will also tell you the Griffey Jr. Bowman RC is epic in its own right… who can forget the only card that required a special box due to its height?

The 1989 Griffey Jr. Tiffany RC is a true gem and a card every serious collector should have. 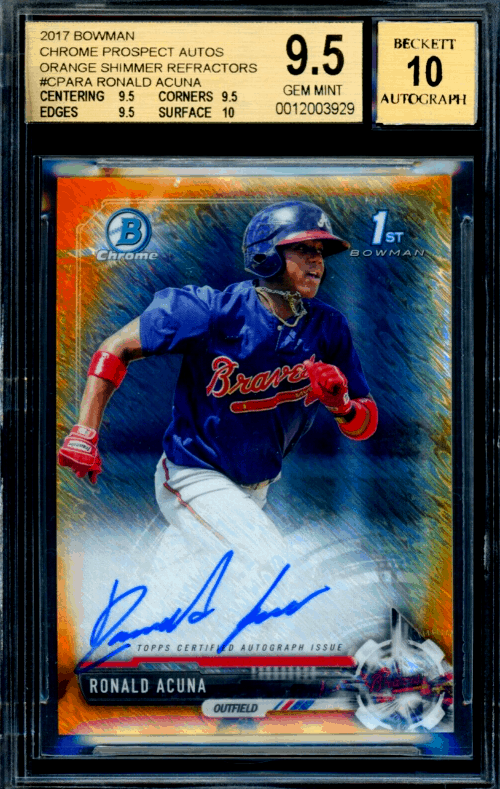 The Acuna Jr. 2017 Bowman Chrome Refractor RC has to be one of the best Bowman baseball cards, if not THE best… the Shimmer Refractors in particular are straight #EYECANDY #DRIP4DAYS.

Numbered #CPARA the card shows Acuna Jr. sprinting out of the batter’s box after slapping the ball down the right-field line.

His name is positioned in the bottom left corner and the autograph is placed just above his printed name. The Bowman Chrome Logo is in the top left and the Bowman 1st Logo is in the top right… a great card for high-end investors as the kid has his prime years in front of him (and he has a long term contract with a team that is dedicated to winning). 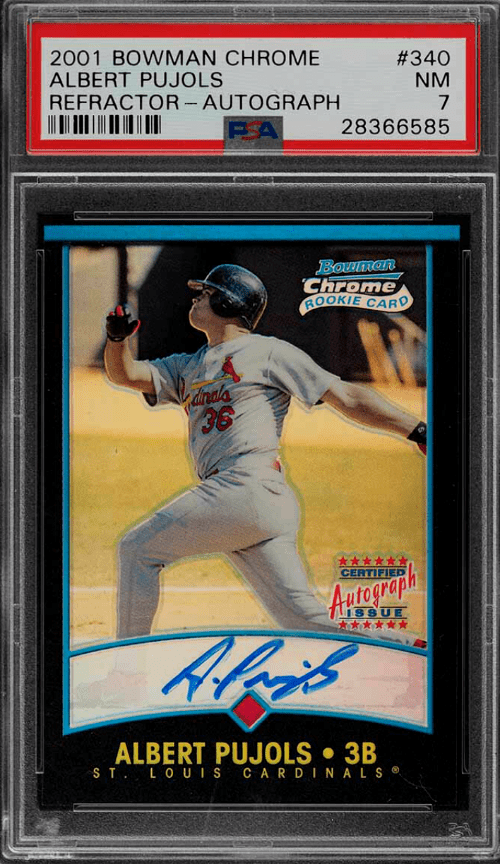 If Albert Pujols played his entire career as a Yankee we would most likely be referring to him as a top 5 player of all-time… Albert’s career is loaded for bear if you take a look at his stat lines (year in, year out)… he is by far one of the most underrated players in the history of the game and is a 100% shoo-in Hall of Famer.

The 2001 Albert Pujols Bowman Chrome RC is one of his best rookie cards if not the best (his SP Authentic RC is a damn good investment as well).

Must Have: Albert Pujols Rookie Cards

Numbered #340 the card shows Pujols jacking the ball out of the yard for an easy homer. His name, position, and team name are positioned at the bottom center and his autograph is right above.

Not the best-looking card in the world but a damn good investment going forward. 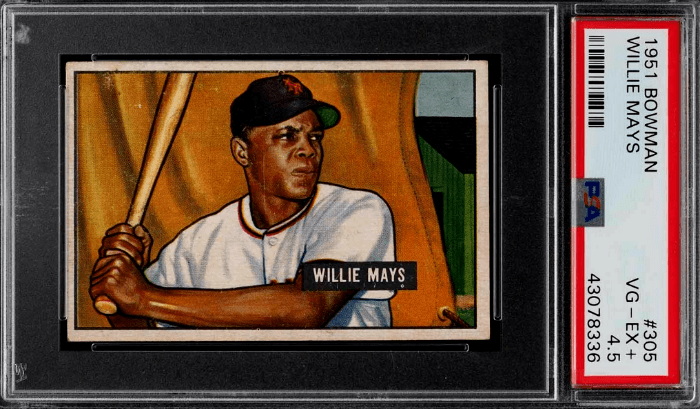 The 1951 Bowman Baseball Card Set has to be in the top 5 of all-time as it offers both a Mantle and Willie Mays rookie card… the set is unlike any other cards produced at the time and has not been matched since.

Numbered #305 the Wilie Mays Bowman baseball card shows Willie with the bat in hand with a mean-ass look on his face… throwing at this guy was never a good idea unless you wanted a potential ass whopping. 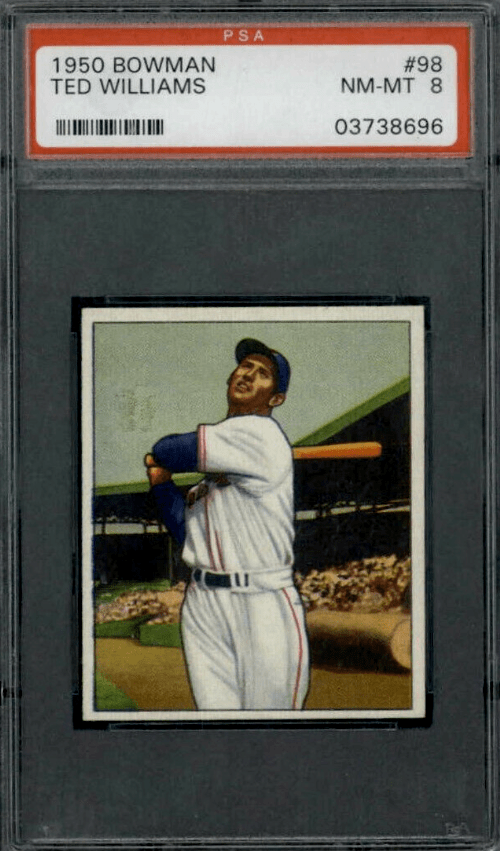 This is the first Bowman card to feature the Splendid Splinter (aka Ted Williams) and the timing couldn’t have been better as Bowman brought the heat with an eye-popping design and a full-color presentation.

“Keep in mind that this card is notorious for having a print line that extends from the roof of the stadium towards his cap. Since this is a common defect for the card, it will not detract from the overall grade” – PSACard

Numbered #98 the card shows the Splendid Splinter finishing his majestic swing, looking skyward with a smug look on his face.

The 1950 Ted Williams Bowman Baseball Card measures approximately 2- 1/16″ by 2½” and is a great addition to any investment portfolio.

This is probably our favorite Bowman baseball card from a design standpoint and is actually somewhat cheap as far as Mike Trout rookie cards go… go ahead and make a bid on this bad boy if you can get this in a PSA 9, PSA 10, or BGS 9.5 on eBay auctions.

Numbered #BSPMT the card shows Trout slapping the ball down the line for a base knock at minimum. The strength of the card is the American League Logo in the background that blends with the Angels Red Uniform in what we like to call #CANDYDRIP.

Which Bowman Baseball Cards Are Worth The Most Money? 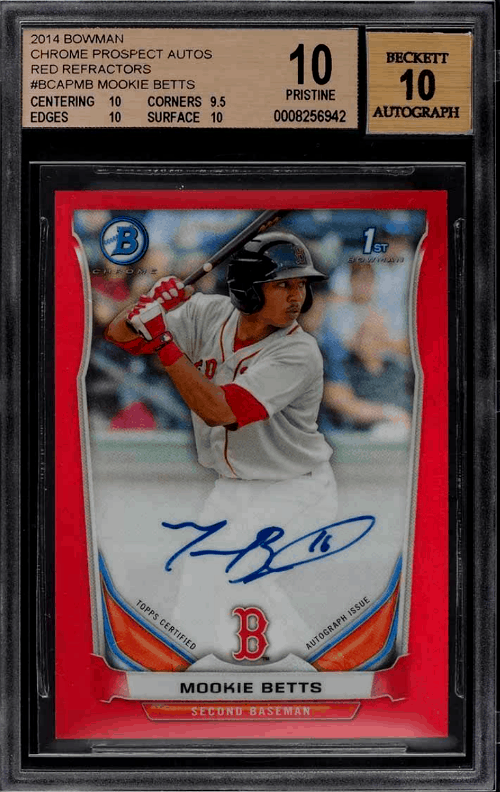 Mookie Betts helped propel the Dodgers to their first World Series win since 1988 and in true beastmode style having one of the best win percentages ever to finish a season (only the Legendary Yankees teams had better).

The 2014 Mookie Betts Bowman Chrome Refractor rookie card is gorgeous and is available in a variety of colors… his name and position are centered at the bottom of the card while the Bowman Chrome logo is placed in the top left. 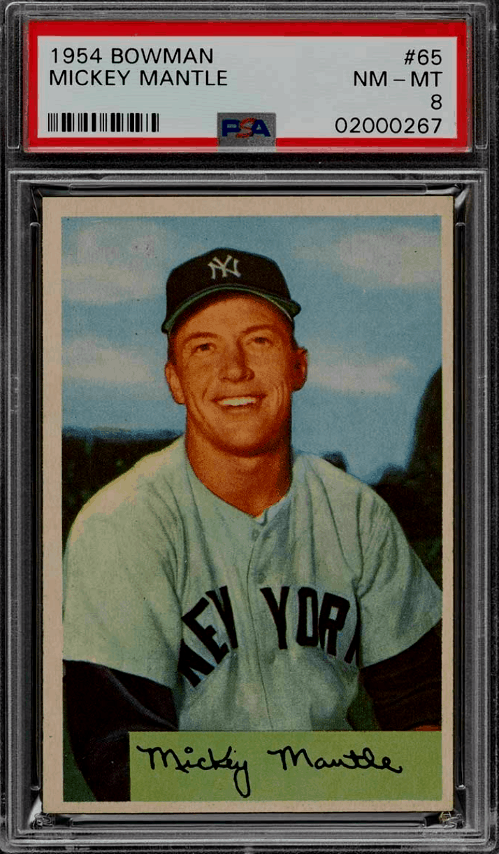 Mickey Mantle remains one of the most beloved Yankees of all time and has a statue memorialized in Yankee Stadium’s Monument Park with his plaque affectionately noting that he was “a great teammate”. 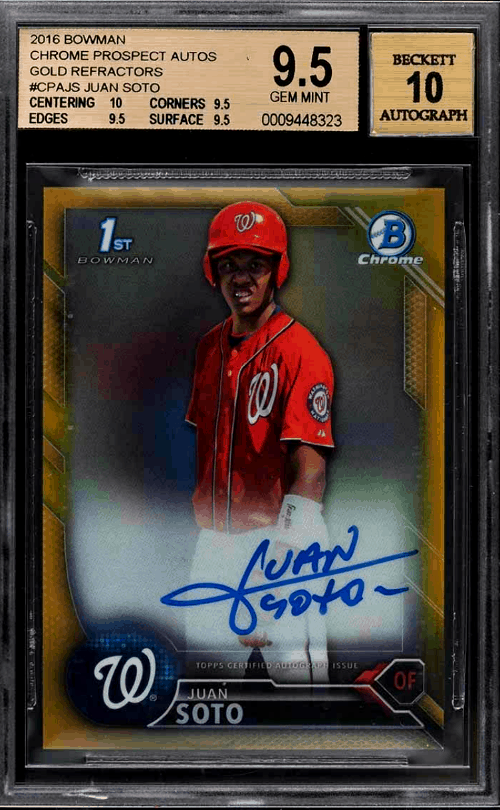 Juan Soto is a beast and was a huge part of why the Washington Nationals won the World Series in 2019. Not only is he a great player statistically but he is great in the clubhouse as well.

The 2016 Juan Soto Bowman Chrome baseball card is a thing of beauty and shows Soto on the base looking back at the dugout in what we can assume is getting a sign. 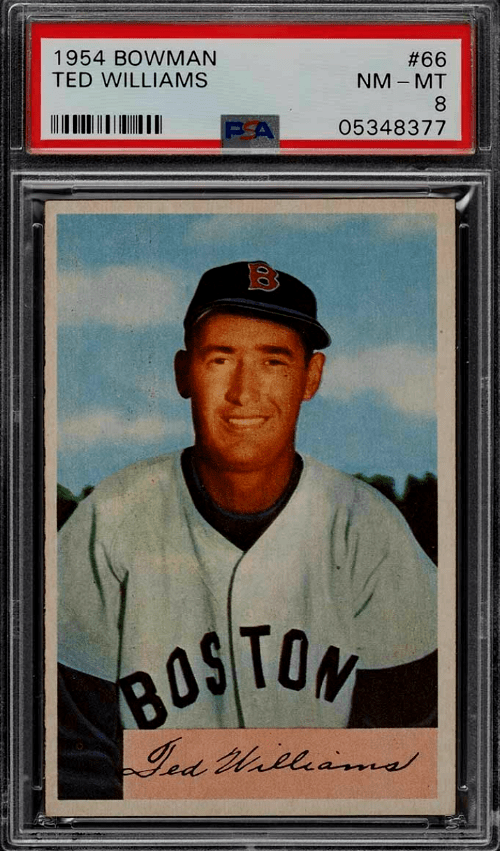 Here we have another smug-looking Ted Williams baseball card… not that this is a bad thing, we just find it funny how smug this guy was (don’t believe us… he froze his body after his death lol).

Must Read: The Best Topps Baseball Cards Of All-Time

The 1954 Ted Williams Bowman card not only comes with a great story, but it is also widely considered to be one of the most iconic baseball cards in the postwar era. 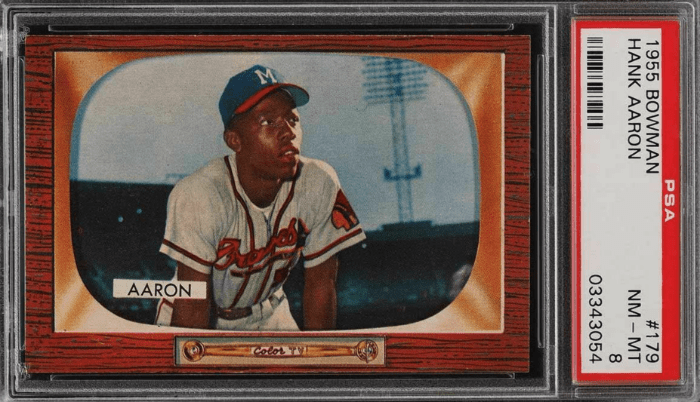 Henry Louis Aaron (born February 5, 1934), nicknamed “Hammer” or “Hammerin‘ Hank,” is a retired Hall of Fame right fielder who now serves as the senior vice president of the Atlanta Braves.

1955 was the second year of a straight tear in which he averaged 36 home runs each year from 1954 to 1973, which propelled him to breaking Babe Ruth’s career 714 home run record.

Numbered #179 this card is straight #oldschool with the simple wood-grain border and the simplicity of the name listed as “Aaron”.

Where to buy Bowman baseball cards?