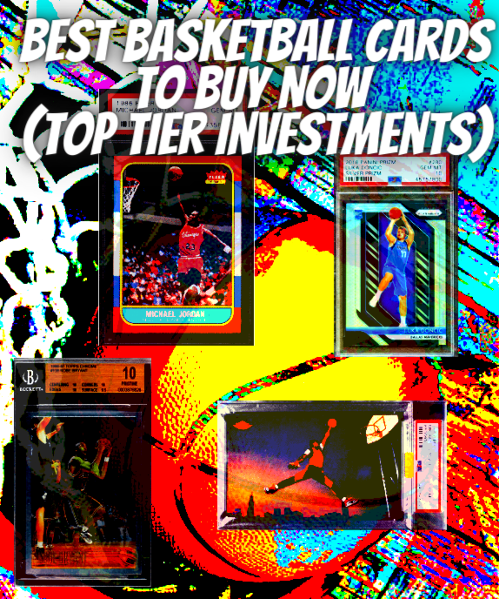 Much depends on what is most likely to sell for the biggest profit, and it’s not always easy to judge who or what will be popular in a year’s time.

It’s worth taking the time to gauge your options, to work out exactly which card is right for you.

For example, your budget will be an obvious constraint, as well as how long you’re looking to invest.  A long-term investment piece will have different characteristics to a card you’re hoping to flip quickly.

We’ve included everything you could possibly need to know about both the player and the card, with something to suit

We’ve looked at everything from recent market data to values to bring you this list with some of the best investment options as of now.

The cards are listed in no particular order and there are options to suit almost every budget.

Rookie cards make up the majority of the list, as they’re the most profitable purchase at any given time.

Of course, some are worth more than others, and brand recognition will also have a role to play. For investment purposes, we’d advise sticking with PSA, BGS, and SGC graded options whenever possible.

You’ll have a better idea of exactly what the card is worth, eliminate the risk of losing money, and you won’t have to go to the trouble of sending it off to be appraised yourself.

Without further ado, let’s get ready to rumble.

We’ll start off with one of the most recognizable cards in the hobby, released way back in 1985. 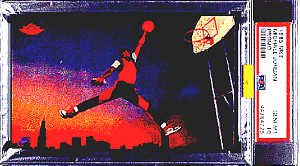 Where better to begin than with His Airness? Michael Jordan is a true legend, while the legacy of his branding still remains as strong today as it ever was.

A six-time NBA champion, (and the Finals MVP each time), he ended his career as a 14-time All-Star and the first billionaire player in NBA history.

If you can name it, he has probably achieved it.

This promo card was released by Nike in 1985, as Jordan leaps towards the net in an iconic shot.

It’s one of the first-ever cards to feature the young star, while the ‘Jumpman’ pose is used to advertise the original Jordan 1 sneakers.

It wasn’t the rarest card by any means when it was originally released in ‘85, but prices for mint copies have risen significantly in the last few years.

Keep an eye out for reprints which are sometimes sold as the ‘85 card by unscrupulous sellers. Cards from the original set are over-sized, measuring a little more than 3″ x 5″. 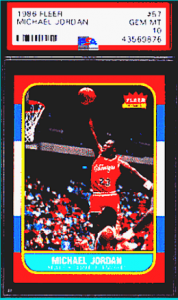 MJ cards are great investments at the moment, following a resurgence in popularity in the last few years. In part due to The Last Dance (Rewatch The Last Dance), almost every Jordan card is worth significantly more than they were a decade ago.

One of the most iconic cards from the 1980s, Jordan’s Fleer RC has a bright red, white, and blue background.

“Please note due to how iconic the MJ Fleer RC is we feel its OK to drop your minimum grade requirements down to PSA 6 or SGC 7.”

It features an action shot of MJ as he leaps up towards the rim, in a typically dominating display.

As the definitive Jordan rookie card, the ‘86 Fleer sees a lot of interest at any given time.

Compared to many others on the list, it’s extremely condition-sensitive, which is why the price of PSA 10 copies has skyrocketed over the past year.

It’s arguably the most popular basketball card ever, and prices continue to climb with no end result in sight.

For example, prices for mint Jordan RCs have more than doubled since 2014. What will they be worth by 2025? 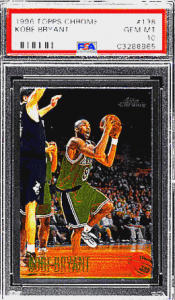 Kobe Bryant cards are another extremely hot ticket item and should be for the foreseeable future. RIP Black Mamba.

Investors continually keep putting up massive amounts of money into Kobe Bryant rookie cards and his cards are some of the best in terms of ROI.

He first won an NBA championship in 2000 and went on to win another four titles for a total of five (two of which he was Finals MVP).

His 1996 Topps Chrome rookie card is what we’re looking at here. It has a large action shot of Kobe laying the ball up with the players in the background mostly faded out. 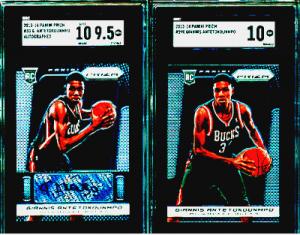 Next up is Giannis Antetokounmpo. The “Greek Freak” is one of the biggest stars in the modern-day and recently announced that a Disney movie about his life was in the works.

Among his numerous accolades is the honor of being named as the NBA MVP in 2019 and 2020, joining Hakeem Olajuwon and Michael Jordan as the only players to win MVP and NBA Defensive Player of the Year awards in the same season.

His Prizm and Prizm Signature cards are another great addition to the list, and it’s a true premium option.

It’s hard to do better than a Prizm base rookie card when it comes to basketball card investing as they are extremely popular and easy to sell when the market is going well. But by the same token, they also fall the most in terms of ROI.

If you’re looking for a long-term investment piece that could be worth a lot and when we say a lot we mean A LOT MORE in a decade or two. 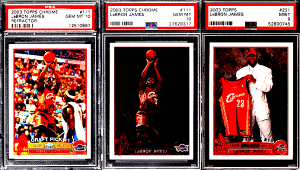 These are what we call LEBRONS’ BIG THREE.

Here we have some of the best investments in the entire sports card hobby if not the entire alternative investment industry.

Best of all, all three have completely different values as PSA 10/SGC 10/BGS 9.5 grades.

Are you an investor on a budget? Try the 2003 Topps LeBron RC.

Looking to spend a solid amount without going completely nuts? The LeBron James 2003 Topps Chrome rookie card is right up your alley.

Or maybe you a CEO or have recently won the Powerball. You should be looking at the crown jewel of the three in the Topps Chrome Refractor LeBron rookie card. 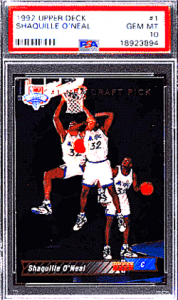 We love the 1992 Shaq Upper Deck rookie card as not only is it a great-looking card, but it’s available in international versions to boot.

Number #1 or #1a in the United States but the Italian, French, or Spanish version (also sometimes called international within the listings) numbered #220.

Consider yourself extremely lucky if you can obtain one of the French, Italian, or Spanish versions at a PSA 10 or SGC 10 grade, as they are scarce at high grades.

Not only do you have a great-looking Shaq card but an outstanding long-term investment. 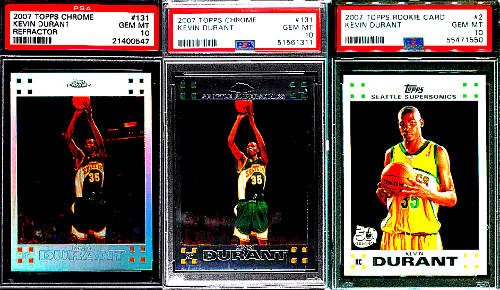 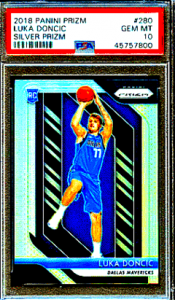 Luka Doncic is last on this list but he could have the top ROI over the next 10 years.

It’s easy to see why one of his RCs is one of the best basketball cards to invest in now, as he seems destined for greatness, and he has all of the tools to succeed in the NBA.

His 2018 Panini Prizm card has everything you’d expect from the brand, with a unique border design and a crisp RC logo found on the top left corner.

Doncic is pictured in the middle of the card as he leaps up to make a shot.

As you can see from the list below, there’s a ridiculous amount of parallels to look out for, some of which benefit from low print runs. They offer something to suit almost every budget, making for another great investment option.

Each of the cards we’ve mentioned has attracted hundreds of bids over the past few months, making for some of the more interesting basketball cards if you’re purchasing solely to invest in the future.

Some cards are better suited to a quick flip, while others would probably have a better chance if you’re willing to hold in the long-term.

Much depends on your personal appetite for risk, and what sort of profit you’d be willing to accept. After all, you might have been happy with the price if you sold an ‘86 Jordan Fleer in 2014.

However, holding for a few more years would have seen a significant increase in your personal profit margins.

The same goes for younger players, who still have the majority of their careers ahead of them.

Are you willing to put faith in the prospect of future championship rings and an HoF spot, which will surely cause prices to rise once more?

It’s a risk either way, but that’s the name of the game when you’re investing in items that will ebb and flow depending on external factors.