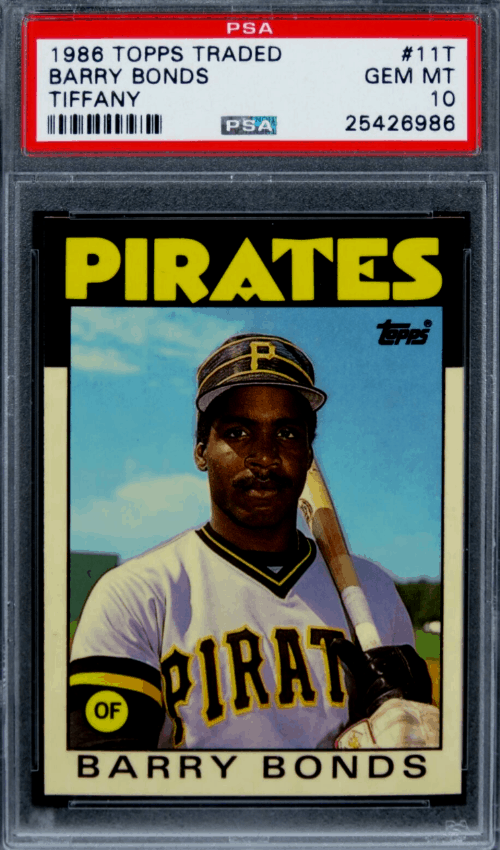 It’s hard to pick a top ten list of the very best outfielders of all-time. After all, unless you’re purely basing it on stats alone, it’s going to be a pretty subjective decision, and some big names are going to miss the cut.

The game has evolved in the last ten years, never mind a century. Regardless, we’ve done our best to identify a top 10 that considers everything from World Series wins to their overall impact on the sport.

Here’s a list with ten of the greatest outfielders of all-time, along with the info about their best ever rookie cards.

You can expect to see a number of vintage cards on the list, as players just seemed to last for longer thanks to the slower speeds seen in the past.

As such, we’d advise to look out for graded options only, as counterfeit versions are especially prevalent when looking at older editions. 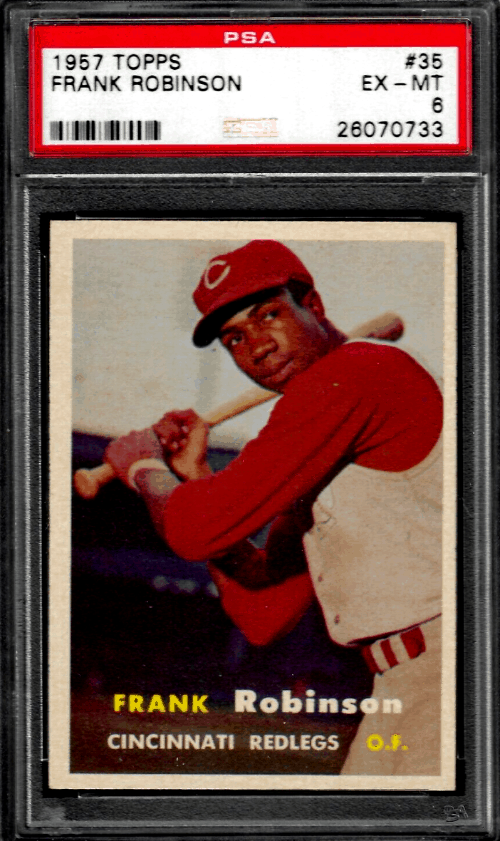 As the only player to be named as the MVP of both the NL and the AL, Frank Robinson probably deserves to be on the list for that achievement alone. He went on to win two World Series rings and made it onto 14 All-Star teams.

|Trending: Most Valuable Baseball Cards from the 90s

Robinson’s ‘57 Topps card is his definitive RC, with a simple posed photo showing the player ready to bat. Taken on a grey day, the background makes the card appear slightly washed out, but his red uniform does stand out. 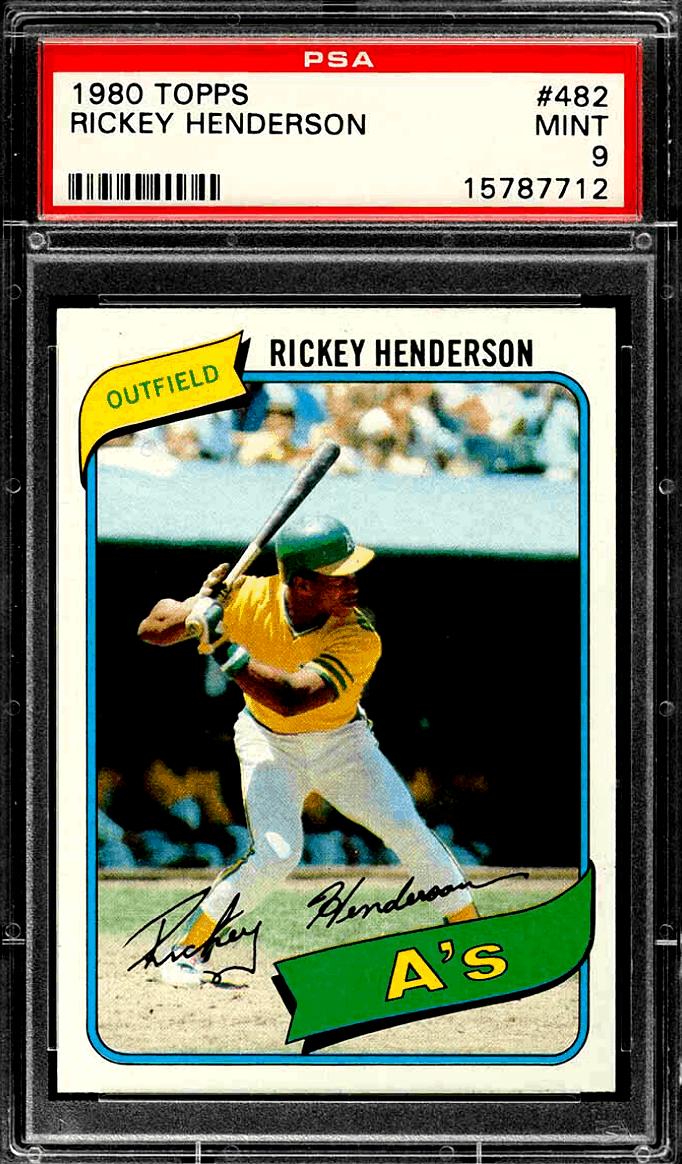 Rickey Henderson played for nine teams between 1979 and 2003, ending his career as a two-time World Series champion and a 10-time All-Star. He holds the single-season record for stolen bases (130) and features in the top ten for a number of career stats.

The 1980 Topps is Henderson’s only recognized rookie card, featuring an action shot of the player with one knee bent as he gets ready to smash a ball into orbit. Due to his popularity, the card has been counterfeited, so we’d advise you to go for graded options only. 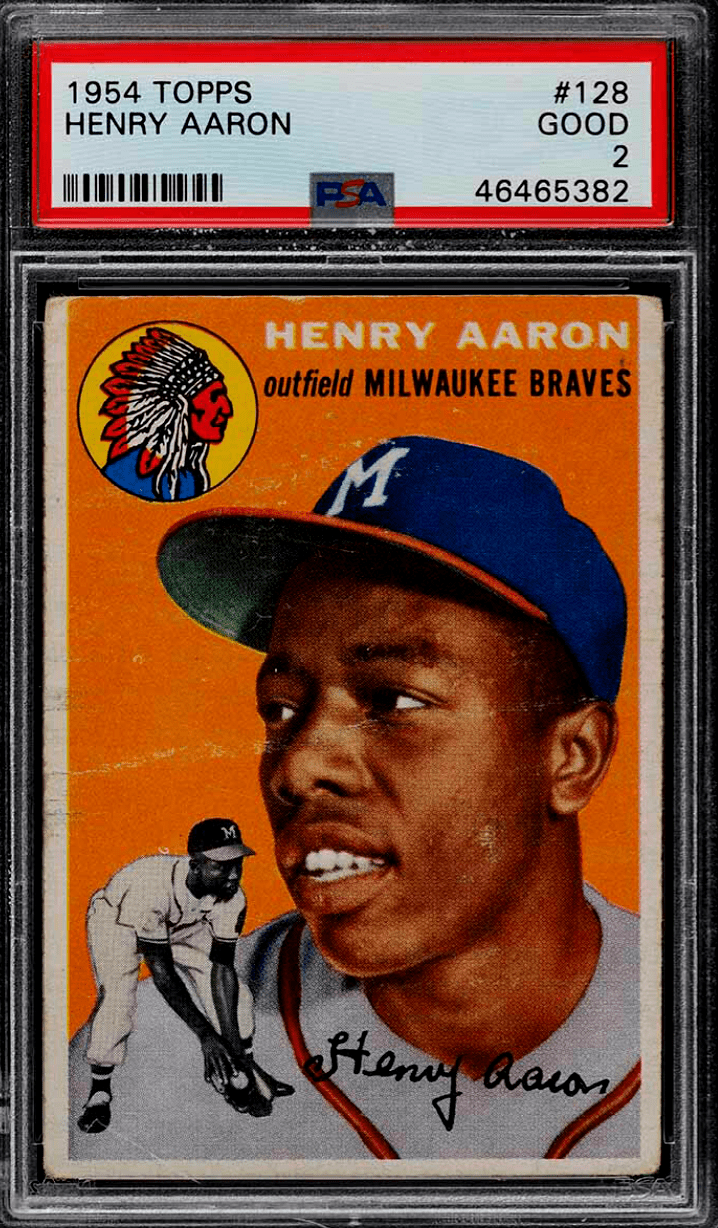 Hank Aaron is another World Series champion, who was named to 21 All-Star teams and won two batting titles over the years. Another fan favorite, his collectible cards are always popular.

Aaron’s ‘54 Topps is one of the more iconic RCs on the market, featuring a couple of images of the player set against a deep orange background. There’s an old Braves logo in the top left corner, and a copy of his signature is found at the bottom. 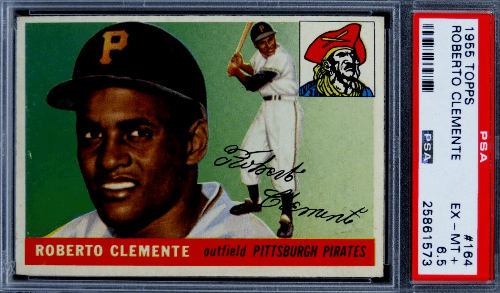 Next up is a Pittsburgh Pirates legend. Roberto Clemente played for 18 seasons with the team, going on to feature as an All-Star 15 times, as well as winning two World Series rings. He passed away in 1972 following a plane crash, while he was en route to deliver aid to earthquake victims in Nicaragua. He was just 38 years of age.

This landscape card is a great release, featuring two images of Clemente thanks to the landscape layout. There’s an old Pirates logo in the top corner, and it has a deep green background. His name and team are listed in an orange tab at the bottom of the card. 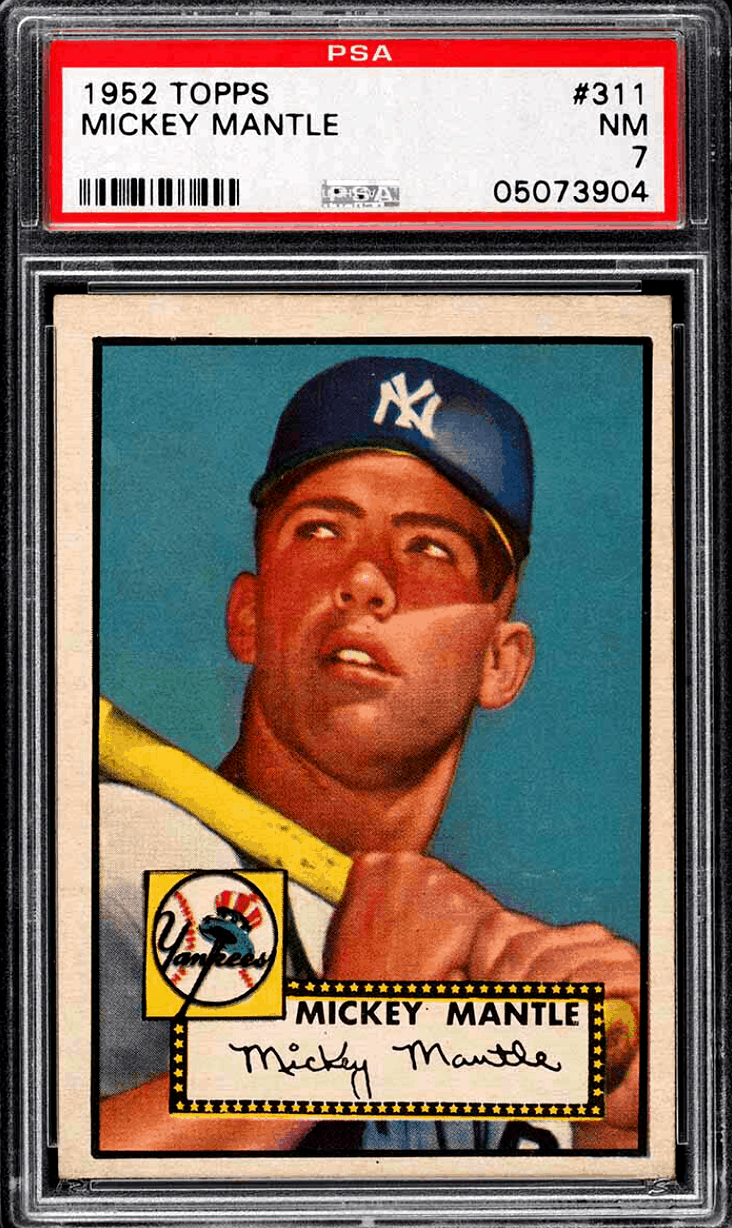 Perhaps second only to Babe Ruth in terms of popularity, Mickey Mantle was a 20-time All-Star who won seven World Series rings during an illustrious career with the Yankees. He still holds World Series records for the most home runs (18), RBIs (40), extra-base hits (26), runs (42), walks (43), and total bases (123), giving some indication of his dominant displays.

Mantle’s RC is a true heavyweight in the collecting world, and it’s often referred to as the ‘Holy Grail’. It features a great close-up image of Mantle with a bat slung over one shoulder, with a deep blue background helping to make the card pop. A PSA 9 copy sold for $2,880,000 in 2018, solidifying it as one of the most valuable RCs ever to be produced.

Ted Williams spent the entirety of his 19-year career with the Boston Red Sox, as well as being called into action during WW2 and the Korean War. An All-Star in every season, there’s no telling what he could have achieved if not for having to cut his career short to fight in multiple wars.

A pre-war option, Williams’ card is a simple one, with a posed black-and-white photo of the player, and a thick white border. Centering and print defects are the most common issues, although it’s not difficult to find decently graded copies. 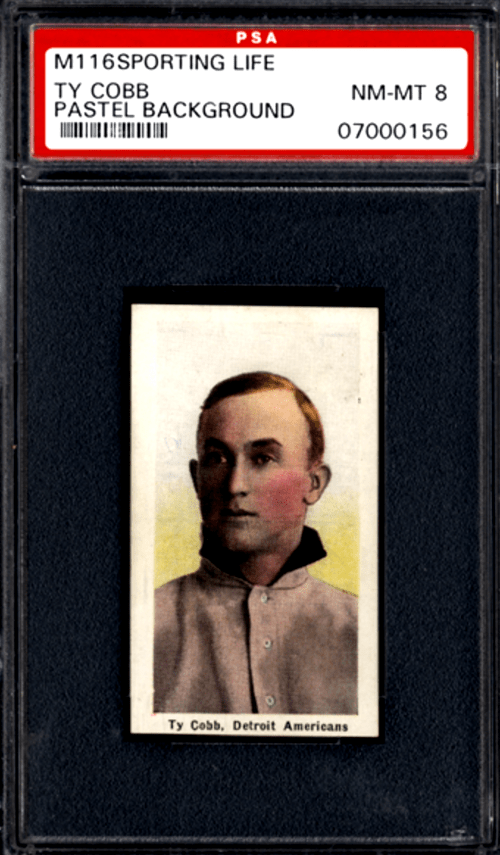 Ty Cobb still holds the all-time record for career batting average at .366, which is crazy to think considering his RC is over 110 years old.

|Must Read: Most Valuable Baseball Cards from the 1970s

Sporting Life magazine released cards from 1902 to 1911, with this Cobb edition dated to 1907. As the earliest card on the list, it’s no surprise to learn that it’s a black-and-white profile image, featuring ‘Tyrus R. Cobb’ in his prime. His name, position, and team are listed at the bottom. 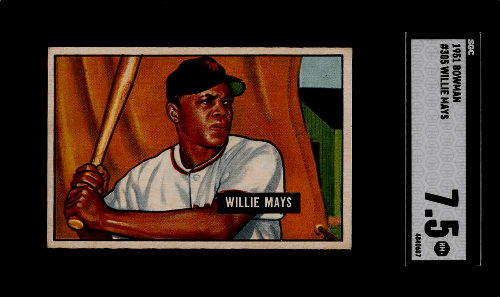 Having been selected to 24 All-Star teams as well as being a two-time MVP, Willie Mays easily makes the list. One of the best hitters in history, he ended his career with 12 batting titles and a Triple Crown.

Mays’ RC is from the 1951 Bowman set, with this being his only official option. It’s a great landscape card that features a detailed illustration of the player, readying up to bat with a deep gold background. It’s not the rarest Mays card ever, but it’s by far the most popular.

Barry Bonds may have had to deal with the ramifications of the steroid scandal in later years, but there’s no denying that his numbers make him one of the greatest ever. He holds a number of current records, including the most career home runs (762), most home runs in a single season (73, set in 2001), and most career walks.

His 1986 Topps RC was released in an era where print runs were extraordinarily high, but there is a Tiffany version that is higher in quality and slightly more expensive than the norm. Bonds is pictured in a profile shot, while the card design matches the Pirates color scheme. 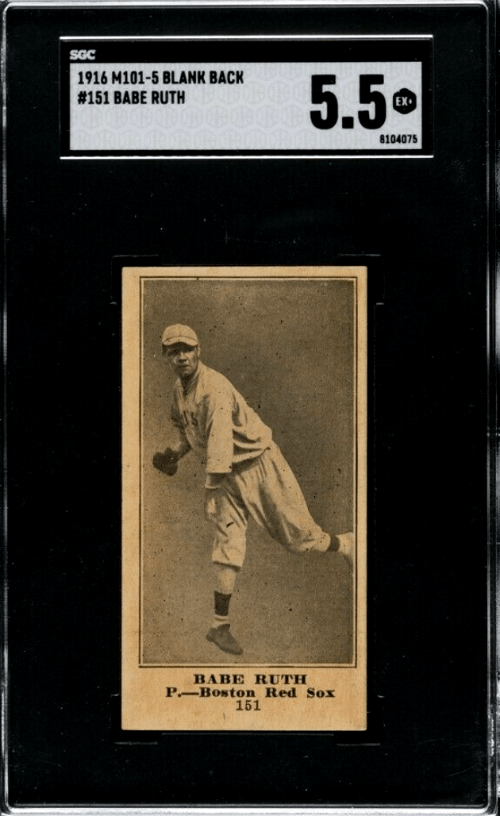 Who else could it be? The Sultan of Swat is the number one outfielder to make the list, with a legacy that transcends the sport. He’s quite possibly the GOAT, while he ended his career with a .342 batting average, 714 home runs, and 2,214 RBIs, with the final stat being a record which still holds to this day.

His RC hails from 1916, although there is an option from 1914 which is more of a prospect card. The 1916 card is the first to show Ruth as a pro, and there are two separate versions, released as part of the M101-5 set in 1915 and the M101-4 set in 1916. The sets were released months apart, and as both have the same number (#151), so they’re equally valuable. Ruth is pictured in a black-and-white posed shot, having just pitched a ball. 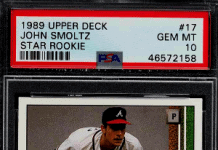 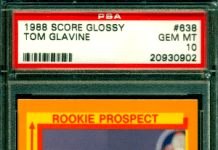