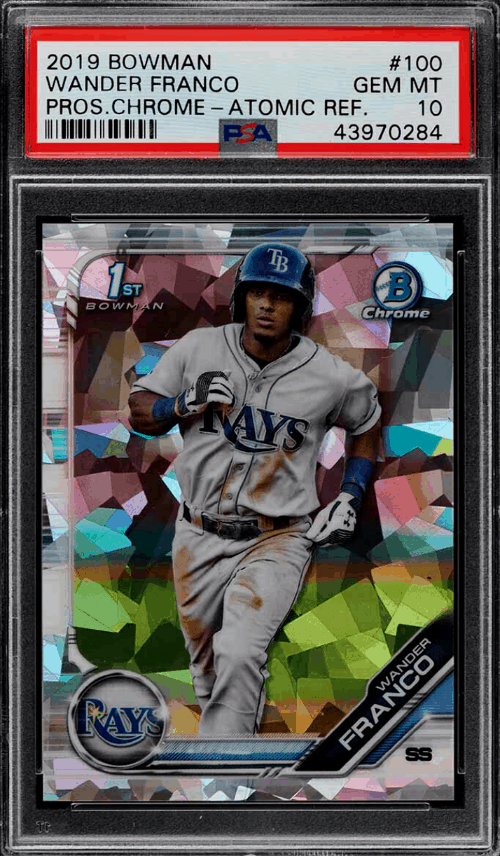 2019 was a strong year for baseball card releases, with lots of interesting options produced by the major manufacturers. The regular season ended September 29th, so it was unaffected by the outbreak of Covid-19, while there were lots of hyped rookies and prospects who were included in the most popular sets.

Here’s a rundown with ten of the very best ‘19 baseball cards, featuring a number of top prospects and rookies, as well as some of the top players in the game.

Despite struggling to match the popularity of the NFL and NBA, baseball had a strong year overall in 2019.

The 2019 World Series began October 22, ending October 30 with the Washington Nationals defeating the Houston Astros in seven games to win their first championship. It was the first time in any major North American sport that the visiting team won every tie of a best-of-seven playoff series, which added extra drama to proceedings.

Baseball might not be the most-watched sport on TV, but collectible cards continue to be a growing market, filled with lots of great options from a range of teams. The list contains ten cards that have great potential to make a profit in the future, although we’d advise looking for gem mint copies if possible considering they were only released a year ago. 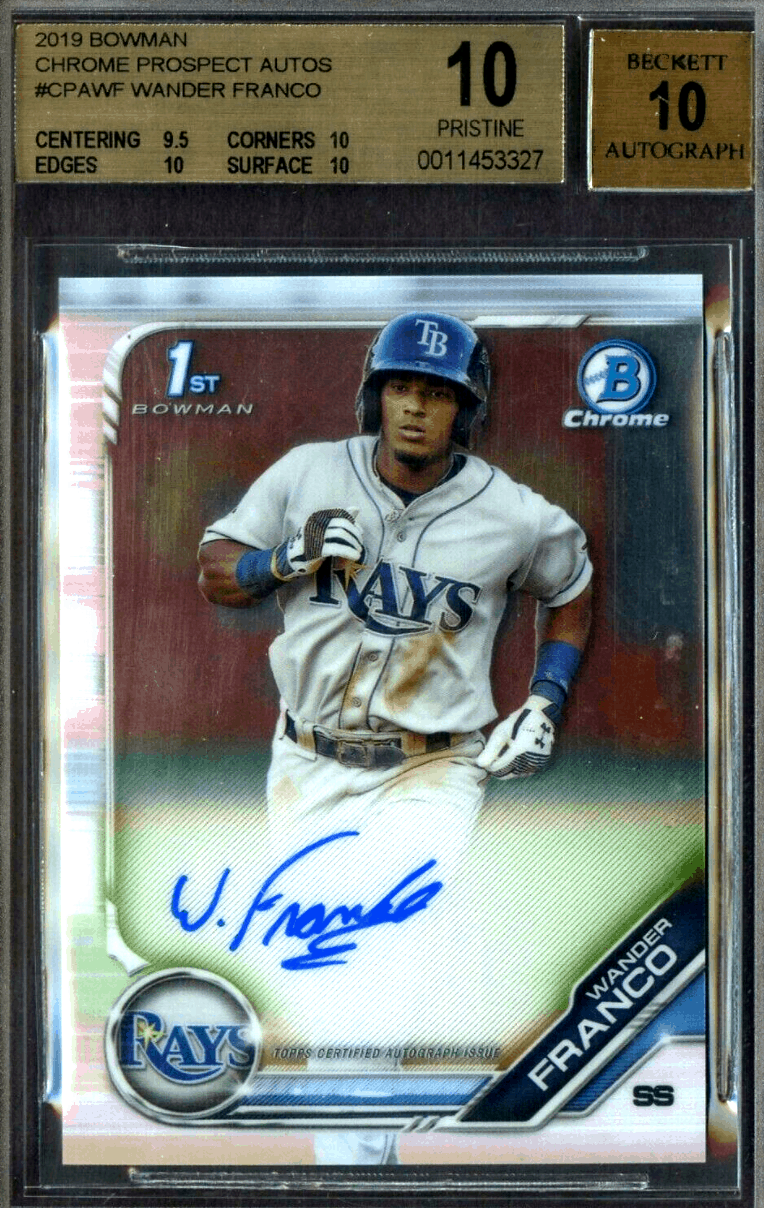 Wander Franco is a shortstop signed with the Tampa Bay Rays. One of their better prospects, he featured in the 2019 All-Star Futures Game, while he was named as the fourth-best prospect by Baseball America in the same year. It’s easy to see why his Bowman Chrome Prospects card is the first to make it onto the list.

His 2019 BCP is a simple card, featuring an action shot of the player as he moves between bases. You’ll find a 1st Bowman logo in the top left corner, and there are heaps of Refractor parallels which vastly increase the price and rarity. You’ll be able to tell the difference by checking the border color, which corresponds with the chosen parallel. 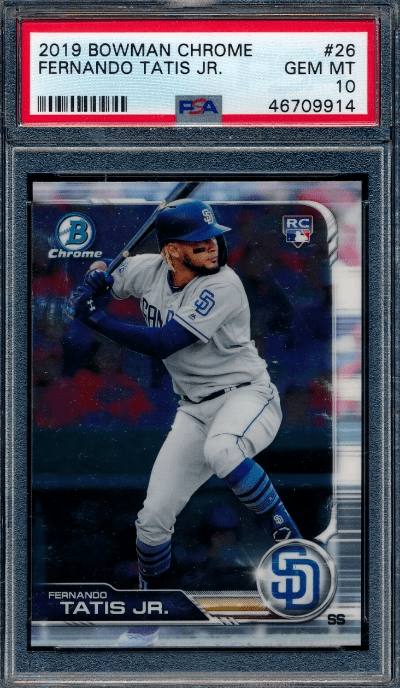 Fernando Tatis Jr. is featured three times on this list, as the San Diego Padres shortstop is currently taking the league by storm. Having recently completed 100 career games, Tatis Jr. posted a .320 batting average with 30 home runs and 70 RBIs. His numbers are better than the likes of Mike Trout and Alex Rodriguez over the same period. In fact, Tatis Jr. ranks first or second in every major offensive category when it comes to a player’s first 100 games in a Padres uniform.

The first Tatis Jr. card features a strong action shot of the player as he prepares to take a swing, with a similar style to the card seen above. There’s an RC logo in the top right corner, and you’ll also find a range of interesting Refractor parallels. 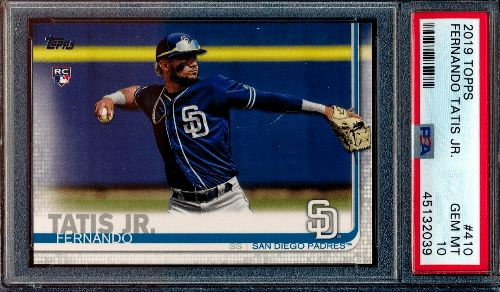 Tatis Jr. is back in the Topps Series 2 set, and when you consider his numbers after 100 games, it’s easy to see why.

The card has a stunning image that takes up the majority of the landscape design, as Tatis Jr. attempts to make a throw with a glove in his other hand. The mitt stretches beyond the border, and there are lots of shiny parallel versions. Unlike some of the others on this list, prices have begun to pick up rapidly since release. 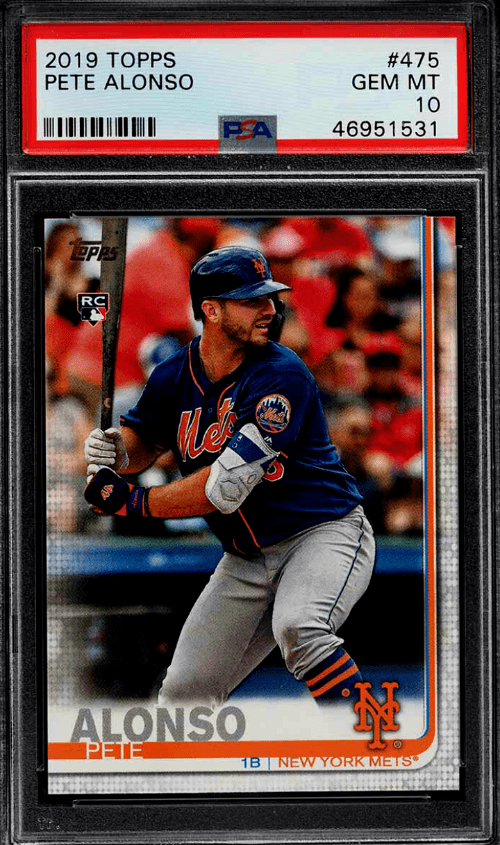 New York Mets’ first baseman Pete Alonso broke the rookie home run record (53) in 2019, while he was also the first Mets player to hit 50 or more home runs in a season. Alonso’s 2019 Topps RC is another valuable card to keep an eye out for.

His #475 card is one of many 2019 Topps Chrome rookie variations, with each having a rainbow finish. At first glance, it’s similar to the base version, featuring an action shot of the player on the plate. The difference can be found by looking at Alonso’s feet. There’s a sock showing in the base version, while the image ends above the knee in the Retail Factory Set Variation. 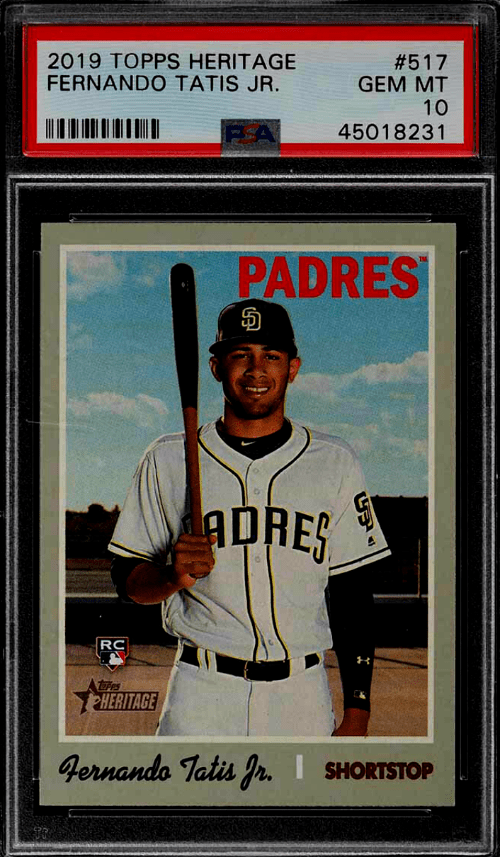 The final Tatis Jr. release comes from the 2019 Topps Heritage set. A throwback card, it features a simple profile image of Tatis with a bat slung over one shoulder. The Padres rookie is smiling at the camera, and it has a simple stadium background, and an RC logo found on the bottom left corner. It’s one of the most affordable cards on the list, especially compared to the majority of his others. 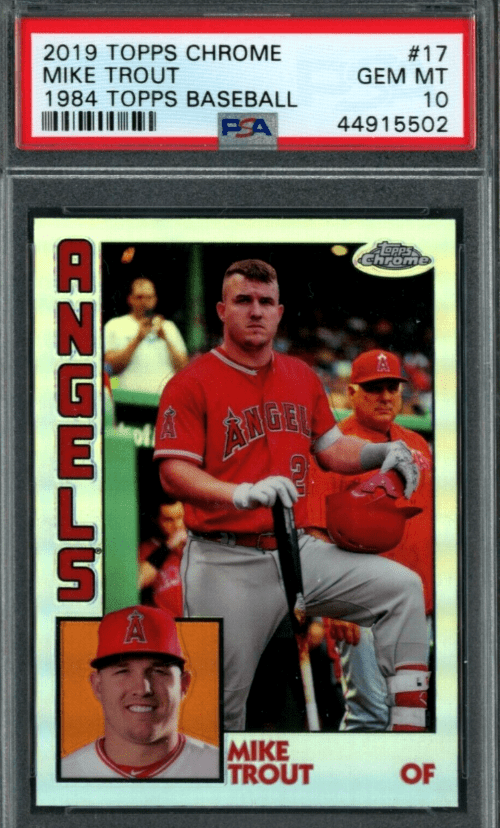 Seen as the greatest of all-time, Mike Trout has played for the LA Angels since 2011. In that time he’s made eight MLB All-Star appearances, he’s a three-time American League MVP, (2014, 2016, 2019), and is a seven-time winner of the Silver Slugger Award.

A Refractor insert featuring the GOAT, Trout’s 2019 Topps Chrome card is an inexpensive option if you’d like to pick up a shiny copy of one of his cards. It features two images of the icon, with a small close-up and a larger posed photo.  It currently retails for next to nothing unless you’re looking at high PSA grades, so it’s worth picking up a copy or two. 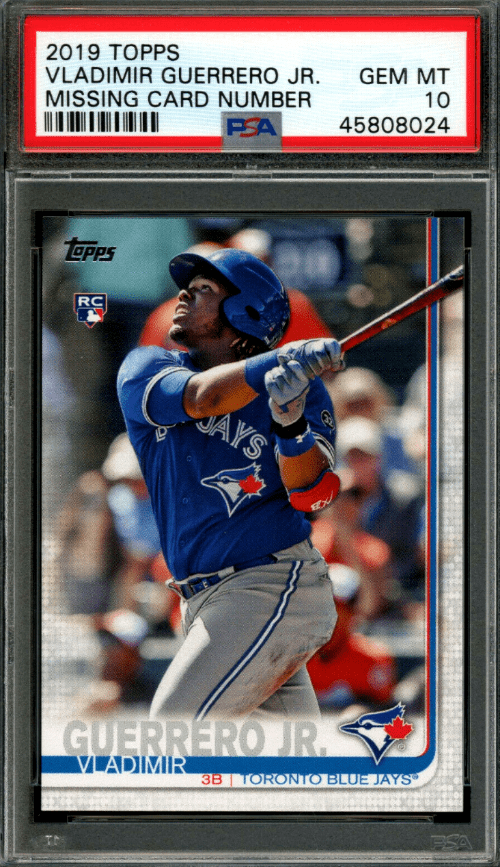 Vladimir Guerrero Jr. made his MLB debut for the Toronto Blue Jays in April 2019, and he was considered to be the top prospect in all of professional baseball prior to being called up. He earned an American League Player of the Week Award a month later, so his RCs are extremely popular.

2019 Topps Baseball sets have a Guerrero Jr. RC variation. A change from the base card found in packs, it also has a different image found on the front. The factory version has a card number on the back, (#700), while the pack-inserted version of the card has no number.

The card features a great shot of the player after a successful hit, with his eyes watching the ball as it soars through the air off-camera. 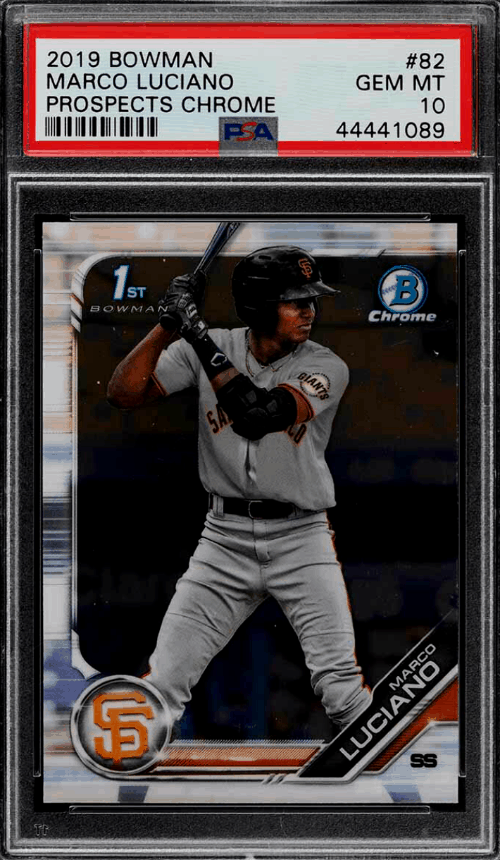 Outfielder Marco Luciano was only a 16-year-old when he signed with the Giants, although he was the No. 2 ranked prospect among baseball’s international class at the time. He signed the deal back in 2018, and while he won’t see time in the major leagues this season, and most likely not next season, he’s still seen as one of the best prospects in the game.

His 2019 Bowman Chrome Prospects card features a strong image of Luciano ready to bat, with a Giants logo clearly visible on his shoulder. It has a stadium background, along with a curved border that isn’t featured on the right-hand side. It’s his 1st Bowman, and there are plenty of parallels that alter the border color.

2019 Shohei Ohtani Topps Heritage Real One #SO (buy on eBay) 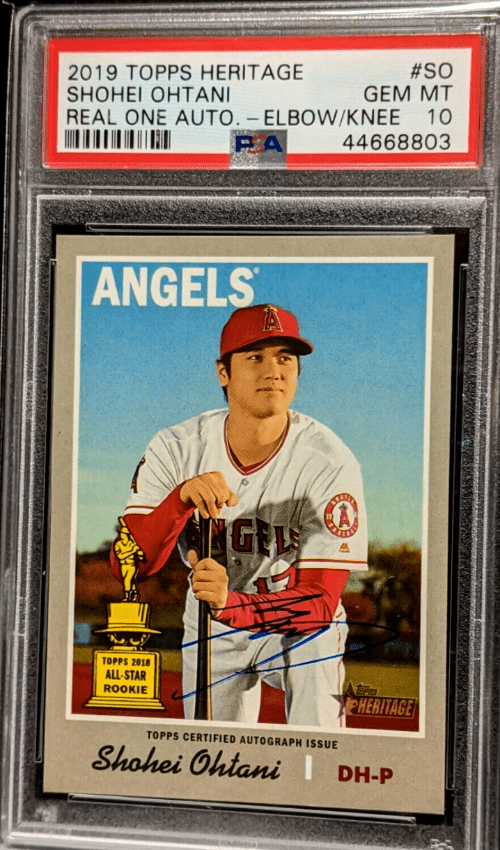 The 2018 American League Rookie of the Year, Shohei Ohtani looked set to feature heavily in 2020. ‘Sho Time’ picked up a flexor strain in his right elbow in 2020, ruling him out from pitching for the rest of the season.

From the 2019 Topps Heritage Real One Autographs Set, Ohtani’s card is a great option if you’re looking for signed investment pieces. Base editions are signed in blue, but you’ll also be able to find red ink versions that are serial-numbered to just 70. The image shows Itani with a bat held ready, with a nostalgia-heavy background that is reminiscent of the ‘50s. 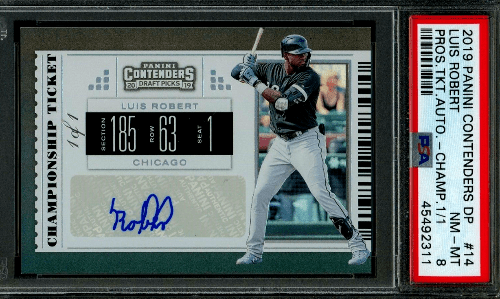 Luis Robert is a talented outfielder who plays for the Chicago White Sox. After overcoming a few injury-plagued seasons he managed to break out in 2019. He recently signed a long-term contract this offseason, and he was in the White Sox lineup on opening day.

The 2019 Panini Contenders set features the usual range of Rookie Tickets, but we’ll be looking at the rarest parallel of them all. Robert’s Championship Ticket is a one of one, with a landscape design and the addition of a stickered auto helping to drive interest. The Cracked Ice parallel is also popular, and much easier to find as there are 23 copies overall.

Only time will tell whether the best prospects and rookies from 2019 will be able to take the league by storm, but there’s still a lot of potential for profit if they manage to live up to the hype.

Of course, 2020 will see a shortened 60-game season, leaving fewer opportunities for players to shine, but things should return to normal in the following years. For now, it seems like a strong year, with lots of great investment options.