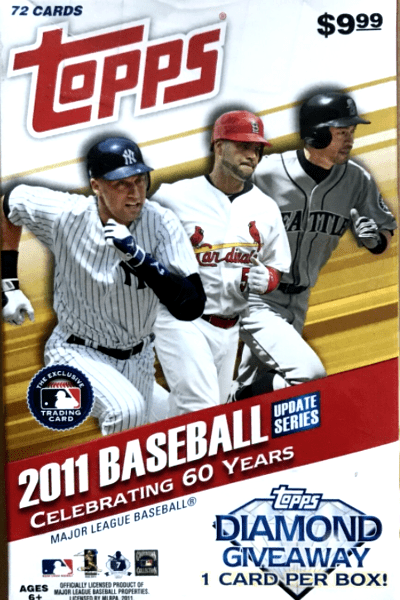 We get emailed a few times per month asking us which are the best baseball card hobby boxes to buy.

So we figured we would do a little research and try to determine which baseball hobby boxes will give you the best bang for your buck!

This is our favorite baseball card box if we’re going to take a chance on buying one.

The 2011 Topps Update Series Baseball Card Box provides the breaker with a chance at the 2011 Mike Trout Update rookie card.

This card has exploded in value over the last few years and comes in some very high-end parallels.

The 2011 Topps Update Diamond Anniversary Mike Trout is at $4,500 with 5 days left on the auction.

This one will cost you a couple of thousands of dollars but provides the chance at the most coveted Derek Jeter rookie cards.

We have actually bought 3 of these in the past couple of years.

The first box contained 0 Jeter rookie cards, the second contained 2, and the last one we bought contained 1.

It’s a risky bet but could pay off.

This box provides you with the chance to get one of two stud rookie cards.

The cards in question are the Albert Pujols and Ichiro Suzuki SP Rookie Cards.

We really like the 2001 Albert Pujols SP Rookie Card as a long-term play.

Buying one of these baseball boxes is similar to playing the lotto and you must be prepared for a total letdown.

BUT if you get lucky you might just score a once-in-a-lifetime hit!

If we could have just one of the boxes named above we would go with the 2011 Topps Update for a chance at a high-end Trout RC.

Did we miss one that should be on the list (better than the 3 mentioned)?