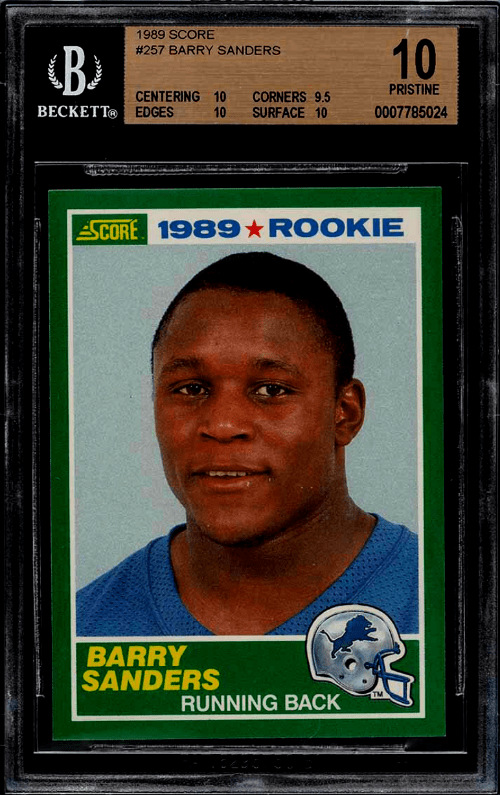 In an ever-evolving sport, the running back position isn’t as important as it once was. Most of the best running backs in NFL history played decades ago, where they were designated as a brutal ball carrier that batters anything in their path.

In more recent seasons, it can be argued that some of the best backs are just as dangerous as a receiver, but it’s rare to see a destroyer in the mold of years gone by.

To celebrate the position, here’s a rundown with five of the best-ever running backs, along with the info about their top rookie cards.

Any list containing the ‘best’ players is going to be subjective, so don’t be disappointed if your personal favorite was left out this time. We’ve looked at numbers, records, and even their rookie cards when deciding on which five players make the cut.

We’re going to go through the list chronologically, with some of the best RBs from various eras accounted for.

Let’s start off with a pre-war player who just liked to hurt people for a living. 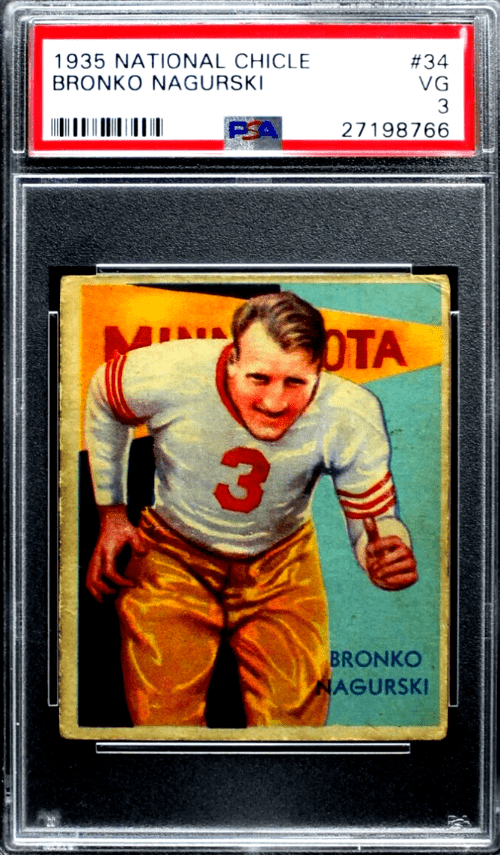 A three-time NFL champion (1932, 1933, 1943), Bronko Nagurski also moonlighted as a wrestler of some acclaim, becoming a multiple-time World Heavyweight Champion. His size and strength meant that he barrelled through most players of the era with no real issues.

Must Read: Best NFL QB and Their Rookie Cards

His rookie card hails from the 1935 National Chicle set, consisting of 36 cards with artistically rendered player likenesses. Nagurski is leaning over in an action shot, with his mustard trousers billowing in the wind. Despite being a pro player by the time this set was released,  he’s pictured as a collegiate athlete with his Minnesota uniform on display. 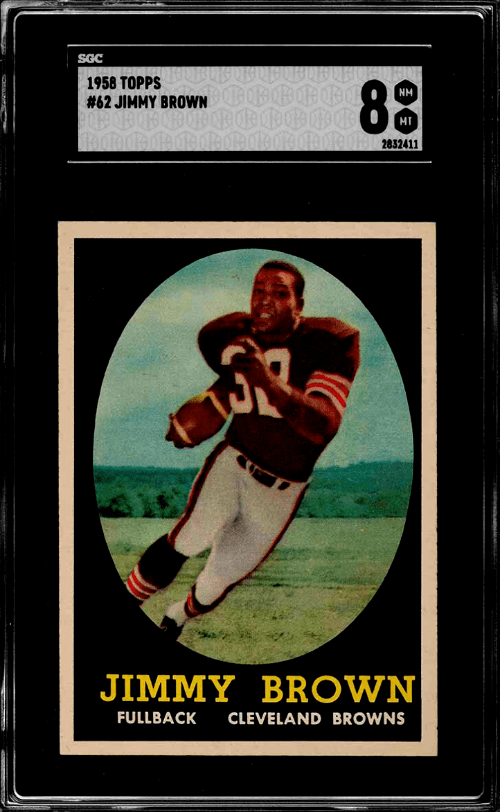 Jim Brown led the league in rushing yards in eight out of nine seasons, and he had shattered most major rushing records by the time he retired. An NFL champion, he was also a 9-time Pro Bowler, 8-time All-Pro First Teamer, and a 3-time NFL MVP. Injuries cut his career short, as he played for only nine seasons, but he still ended with 106 rushing touchdowns, which is the fifth most in NFL history.

Hot Take: Rookie Cards that Could Double Your Money

As the only recognized RC for one of the NFL’s most feared running backs, the ‘58 Topps is valuable and scarce. It features an illustration of ‘Jimmy Brown’ running through a field for some reason, with a bunch of trees in the background. The image is an oval insert, and the card has a solid black background with yellow writing for his name. 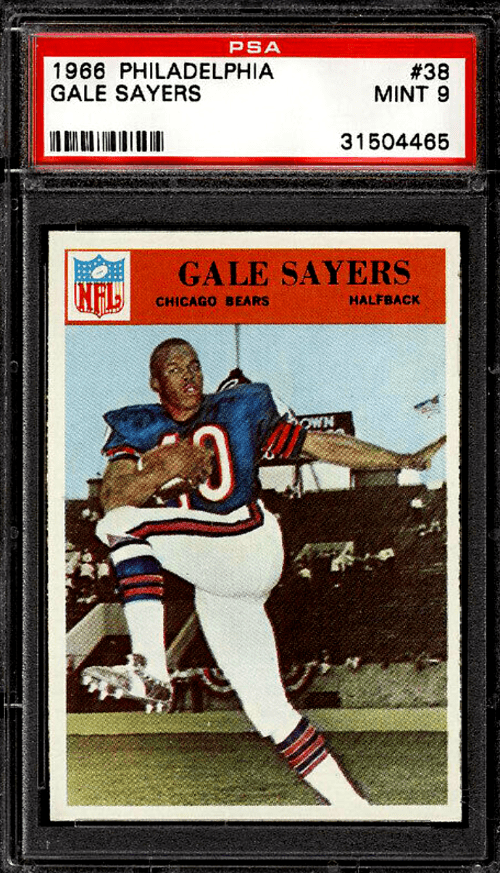 The NFL Rookie of the Year in 1965, Gale Sayers is a halfback rather than a running back, but it’s close enough given the era. The stats don’t lie, and he’s still the record holder for the most TDs in a rookie season (22), the most TDs in a game (6), and the highest career KO return average (30.56).

His RC is a strange one, with a slightly voyeuristic feel as it looks like he wasn’t ready for the photo to be taken in the action shot supplied. His name is listed at the top in a large orange box, alongside a vintage NFL logo. As an older release, chipping, print defects and centering issues are often found, and they hold back the majority from getting the best grades from the likes of PSA. 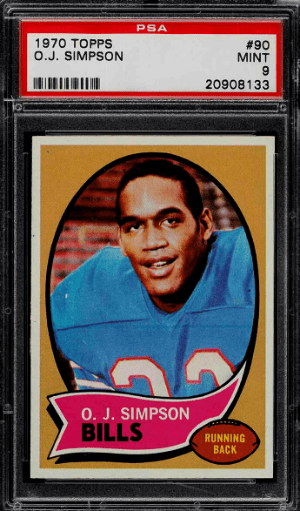 Okay. OJ Simpson is probably better known for ‘the trial of the century’, but there’s no denying that he was an accomplished running back, and that baseball was the catapult that sent him onwards to fame, fortune, and films in the future. The NFL MVP in ‘73, he became the first NFL player to rush for more than 2,000 yards in a season that year.

He still holds the record for the single-season yards-per-game average, (143.1), while he was the only player to ever rush for over 2,000 yards in the 14-game regular season NFL format.

The 1970 Topps is his only recognized rookie card, which makes it one of the more interesting options from the era. He’s pictured smiling at the camera from an oval in the middle of the card, while it has an orange background and a yellow label for his name tag. Most condition-related issues are found around the face, so pay special attention if you’d like to grab a copy for your personal collection.

No list of the best running backs would be complete without Barry Sanders. He spent his entire career with the Detroit Lions after being drafted third overall in 1989, going on to total 15,269 rushing yards (3rd all-time) and 99 rushing TDs (9th all-time). With Walter Payton’s career rushing mark of 16,726 yards insight, he abruptly retired from pro football following the ‘98 season.

The 1989 Score is seen as the definitive Sanders RC, despite being one of the most boring cards ever to be released. Sanders is pictured with a half-smile on his face, with a pale blue background. The border design is green, which doesn’t mesh well with the rest of the card, but it does make the set instantly recognizable. The design hasn’t affected the price, as gem mint copies still sell for a four-figure fee. It’s not bad for a plain card that was reasonably plentiful when it was released during the junk wax era