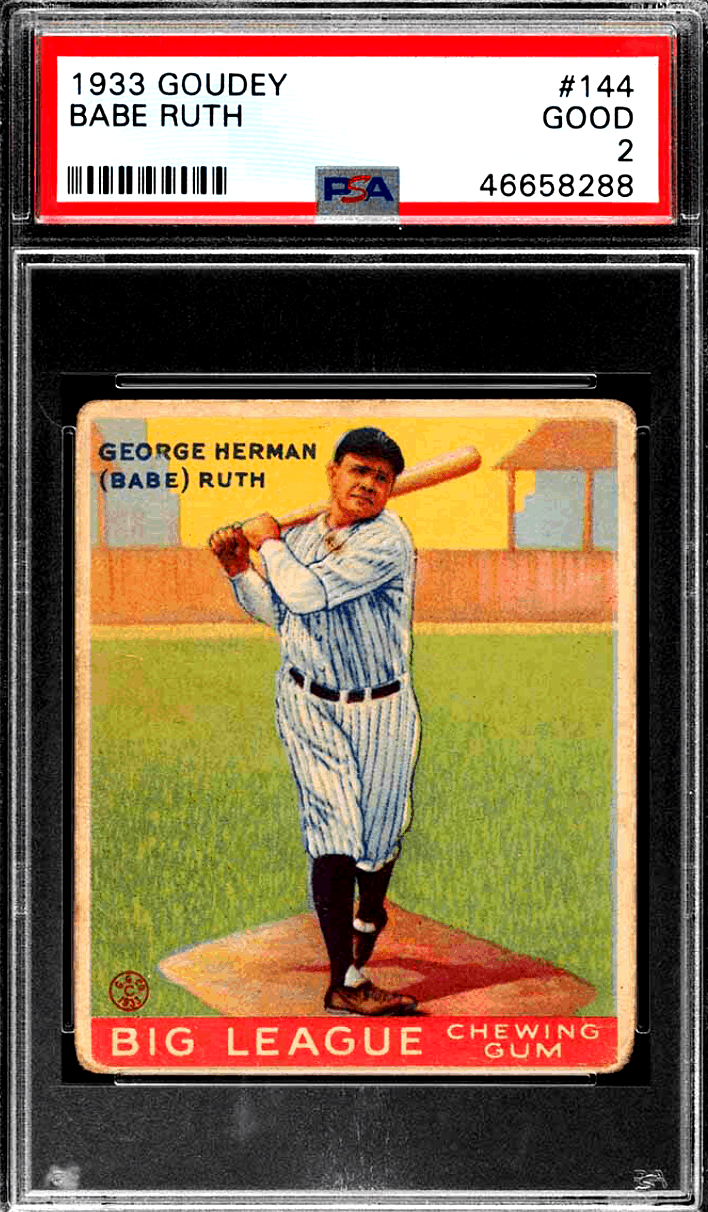 Almost a century ago, the Goudey Gum Company released a massive collection of cards that contained some of the biggest players from the early 1930s.

The 1933 Goudey set is almost forgotten in comparison to historic sets from Topps and Bowman, but there’s no denying it’s influence on the modern era in a number of ways.

We’ve picked out five of the very best 1933 Goudey cards that money can buy, with lots of info about each player and the set itself.

Originally produced as a method to sell more gum to children, the 1933 Goudey release has managed to last the test of time.

The 240-card set has many of the hallmarks of modern versions. There’s a ton of star players on offer, with colored variations and a larger card size than those that were released before. They were released in wax packs, and Goudey was the first to add a stick of gum to entice buyers.

Each card was lovingly colorized, with a mix of action shots and close-ups, and bright backgrounds that helped to inspire options from the 1950s. Goudey sets were relatively short-lived, with only four released all together in the 1930s. Regardless, they’re a solid piece of Americana, and the 1933 release is seen as the pick of the bunch overall.

Must Read: Rookie Cards That Could Double Your Money

All of the cards are susceptible to bleeding, while the majority have suffered surface damage in some shape or form. Of course, the set has also been reprinted on numerous occasions, so it’s best to be wary if you’ve been offered an ungraded card at a price that seems too good to be true.

Graded cards are generally the way to go, as it’s unusual to see PSA 7’s and above for many players. You’ll have a clearer idea of exactly what you’re buying, and you won’t have to worry about fakes or reprints, of which there are many.

As the biggest star of the era, Babe Ruth was always going to feature heavily in any list of the best cards from the early 1930s. Somewhat sneakily, Goudey added four separate versions featuring The Bambino, hoping to drive additional attention to their products with the help of the Yankees legend.

It worked for the most part, and they’re now some of the most wanted vintage cards on the market today.

Babe Ruth is a seven-time World Series champion across three different decades and is arguably still the best-known baseball player of all time. Four cards were produced with his image in the 1933 set, and they feature heavily on our list.

One of the most iconic cards in the history of baseball, the Goudey #144 is a real winner. The illustration shows Ruth stepping up to the plate, ready to swing with his classic kit in full view.

As such, it’s known as the “Full Body Ruth”. *Napoleon Lajoie’s card (#106) was left off the original printing sheets, and collectors had to send off for it via mail. Ruth’s card was double printed in its place, which is why there’s a clear surplus of his “Full Body” cards on the market in comparison to the others.

(*This also means that Lajoie’s card is the rarest in the set by a large margin. It’s extremely difficult to find a real copy, with multiple fakes and reprints of the mail-order only version. Interestingly, Lajoie was also retired at the time, and the back is similar to cards from the 1934 set.)

The double prints of Ruth #144 lead to a couple of slightly different versions on the market, with one being notably clearer compared to the other. However, they both sell for roughly the same price at auction. 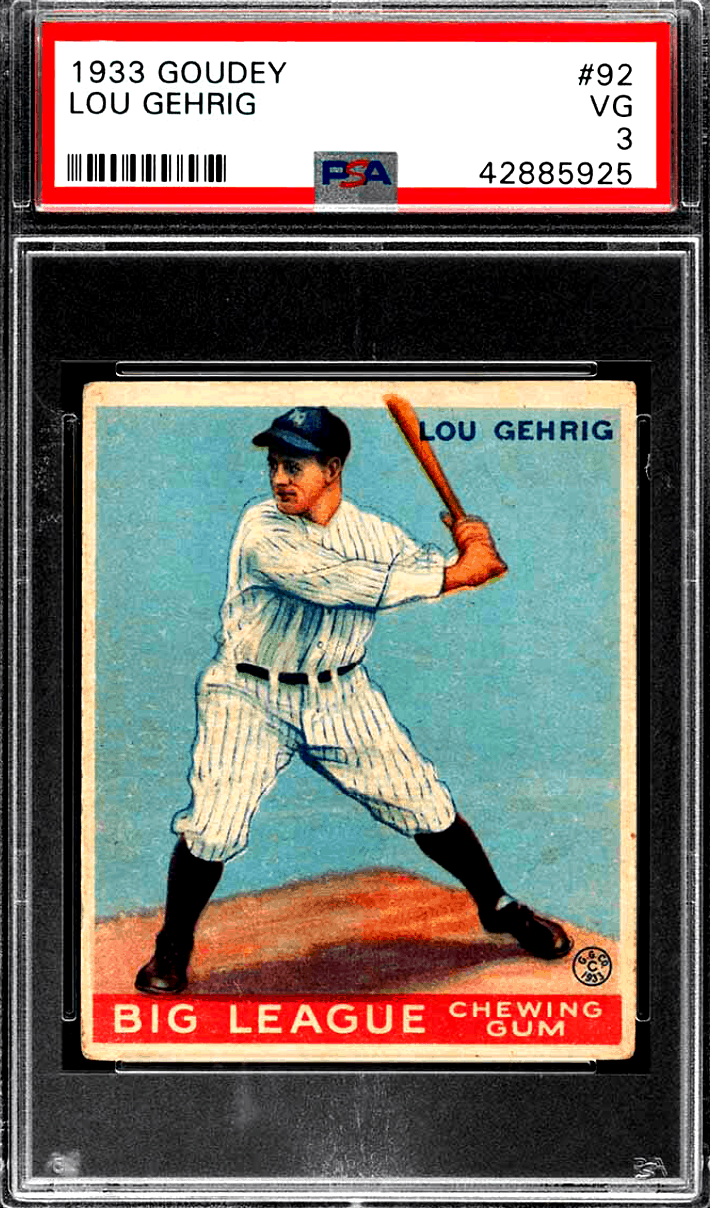 Another phenom from the era, Lou Gehrig is a seven-time All-Star and a six-time World Series champion. Unfortunately, he’s arguably better known for the incurable neuromuscular illness he had, also known as ALS.

Gehrig has just two cards in the 1933 Goudey release, while they typically fail to match the attention given to the pair from the 1934 Goudey set. This is mainly because of subpar focus and color, as it looks washed out in comparison to the bright Ruth cards listed above and below.

This doesn’t mean that they won’t sell for thousands of dollars, and they’re both iconic in their own right. Each of the 1933 cards features Gehrig with a bat held in two hands, with a classic white border and a light blue background.

In comparison, the 1934 set had a comment from Gehrig on the reverse of 84 of the 96 cards, going so far as to add an image of the first baseman on the front along with a speech bubble that reads; “Lou Gehrig says…”

It’s easy to see why 1934 Gehrig cards are often preferred, especially as he was the main focus of the set, and the only player to get more than one edition. With such a small release, Babe Ruth wasn’t even included. 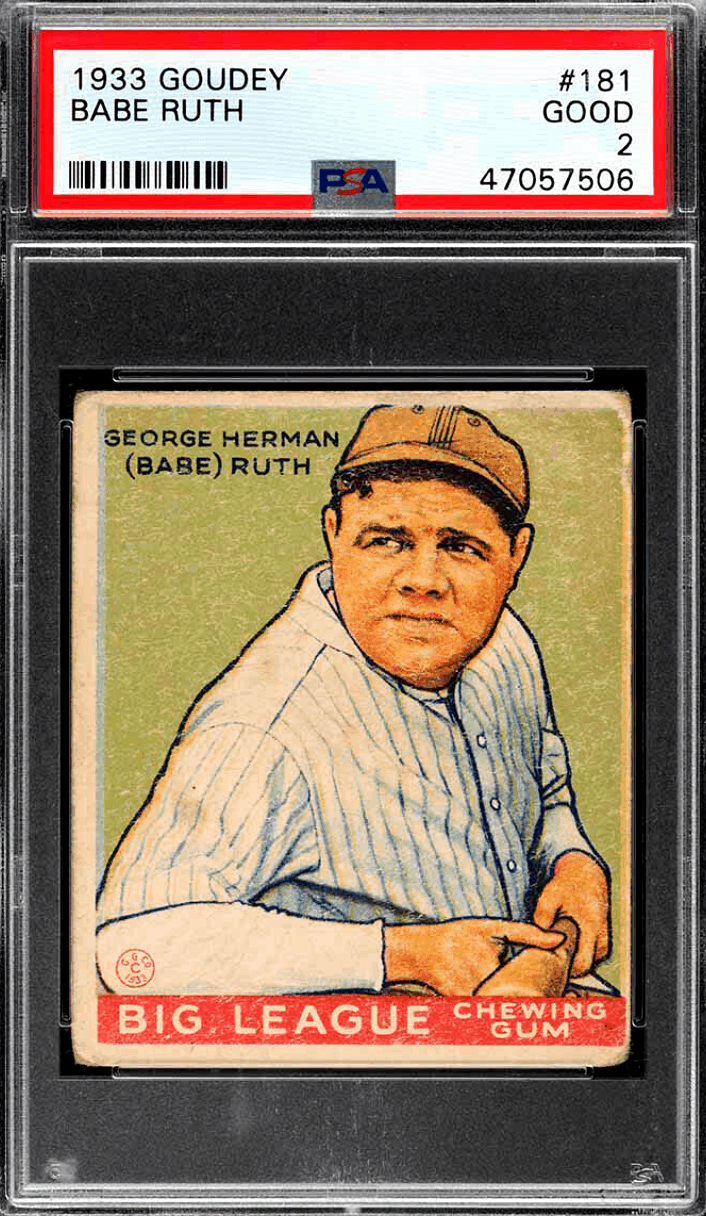 Babe Ruth is back at it again, in what is potentially the most important card from the 1933 set. It features the Yankees legend in his famous striped uniform, in a seated position with a bat in his hands.

The green background has caused it to be given the imaginative moniker “Green Ruth”. The best thing about the card is arguably his expression, which gives insight into his character in a way that the others simply can’t.

The cheapest of the Ruth cards in the set, the 1933 Goudey #181 is still coveted by a wide variety of collectors and investors. The same illustration was also included in the 1935 Goudey 4 in 1 set, which only adds to the interest. 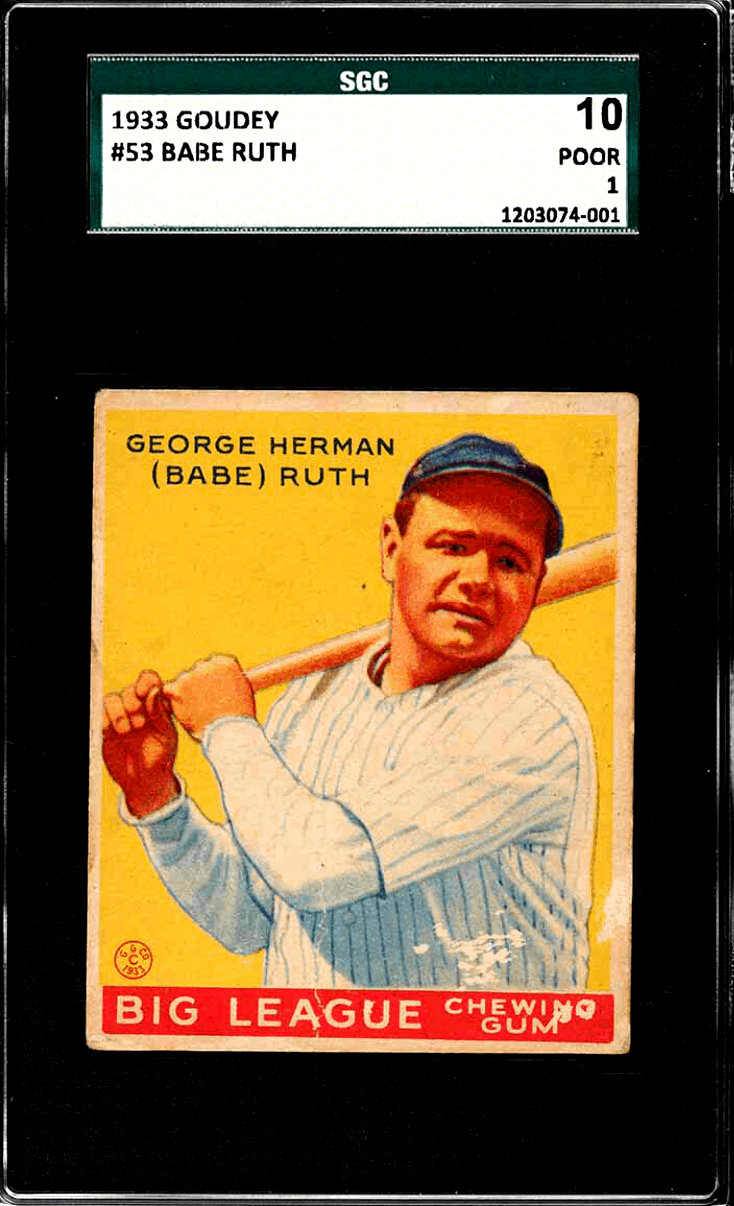 Another great Ruth card, the #53 features an illustration of the Yankees legend with a bat slung over one shoulder. The illustration is actually a close-up of the image found in the #144 card, although it’s more detailed in comparison.

Known as the “Yellow Ruth” for obvious reasons, it’s typically the most difficult to find in mint condition. The bright yellow background immediately catches the eye, and near mint versions can sell for six-figure fees. It’s actually the most valuable of the bunch, so it should definitely make any list of the best 1933 Goudey cards.

Its value makes it the most coveted Ruth card for the majority of collectors, as well as one of the most expensive you’ll find in the hobby. 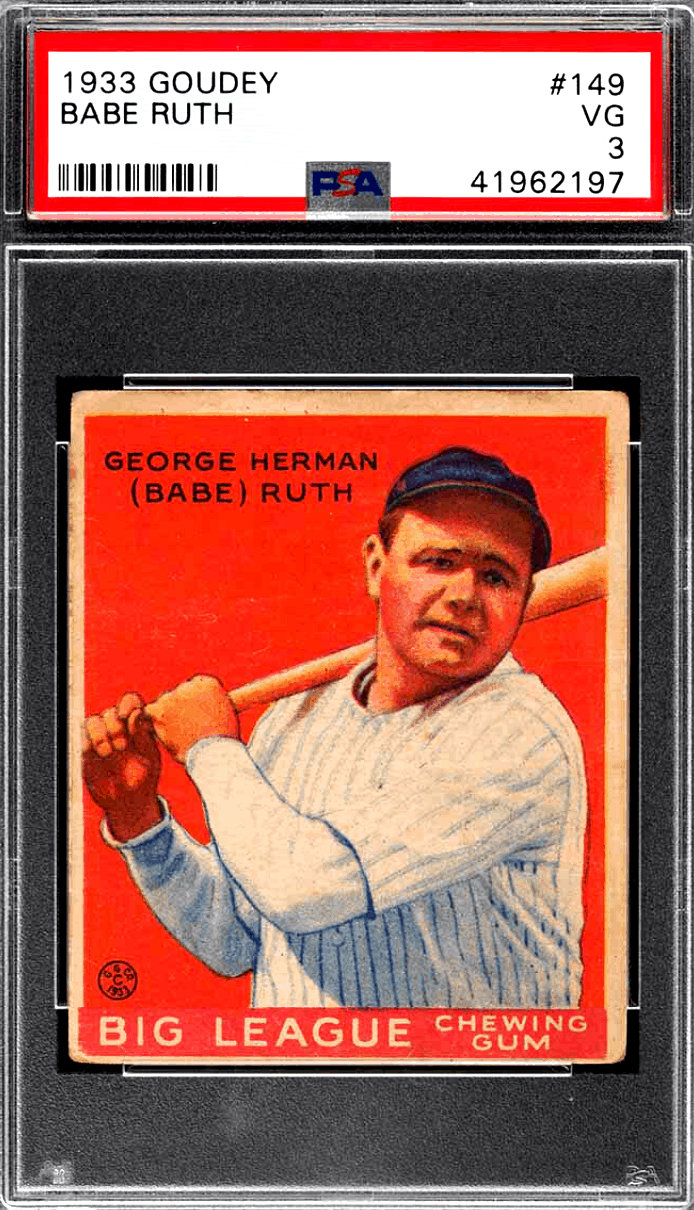 At this rate, you may as well be reading a list of the best Babe Ruth cards from 1933! However, it makes sense as Goudey anchored their set to The Bambino, and it turned out to be a great decision in hindsight.

The final 1933 Goudey to make the list features the same illustration as the #53, although this one has a deep red background which is my personal pick of the four.

It’s a bit easier to find the #149 “Red Ruth” in near mint condition, making it ever so slightly cheaper than it’s yellow counterpart. However, near mint versions will still sell for six figures, and even a half-destroyed copy will cost a considerable amount.

Some collectors try to grab all four of the Ruth cards in the 1933 set, rather than attempting to find all 239 cards, as well as the elusive Lajoie. Whether it’s red, yellow, or green, you’ll be looking at a massive outlay if you want to take a shot at one of the most difficult quads in the collectible game. It makes sense, as the entire set is built around Ruth, so he’s always going to be the key player to look out for.

However, there are lots of players from the 1933 set that are still relatively affordable, even for Hall of Famers and legends of the game. Ruth and Gehrig might round out the list of the best 1933 Goudey cards, but they’re also some of the most expensive that money can buy. Then there’s Lajoie, whose card is so rare that it hardly ever sees the light of day on auction sites.

Will the best cards from the 1933 Goudey set be even more expensive when they hit their centennial marker in 2033? Trends suggest they will, although prices are likely to scare the majority of potential investors away. If you are aiming to invest, the higher the grade, the better. Obviously, that can be difficult considering the high price points, but a set from 1933 was never going to be a good source for finding cheap cards.