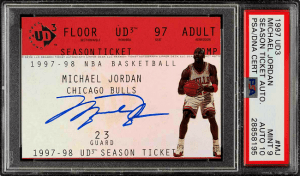 They are primarily known for producing trading cards but also have their tentacles in figurines and die-cast toys.

On 12/23/1988 Upper Deck was granted a license by Major League Baseball to produce baseball cards and just a few months later one of the most iconic cards in all of the hobby was born!

The Upper Deck Ken Griffey Jr Rookie Card was a true game-changer… every kid wanted and those that had it were neighborhood rock stars.

And then to top it of kids were willing to pay an industry-first $1 a pack! Up until that time packs of cards were .50 cents and were most likely damaged by some old ass piece of stale gum.

Upper Deck literally changed the game for both better and worse (they printed way too many cards and flooded the market making most of the cards today worthless).

Imagine how much the 89′ Griffey Jr. rookie card would be worth it there weren’t billions floating around out there.

Well, enough with the history lesson let’s take a look at some of the most memorable, iconic, and valuable cards Upper Deck has printed.

Please note this list is based on a variety of factors to include card value, rarity, card image, staff opinions, player popularity, and card popularity… and in case of debates (we conducted an in-office vote)… obviously, this is not a straight up and down list based on which card is the most expensive so opinions can and will vary.

Please note once a player has been named we will not use him again. For example, more than one Michael Jordan Upper Deck card could have easily been used. But then we might have all MJ cards.

Please note if you feel we left one out please comment and tell us which card you would replace it with.

This list is meant to be fun but also add value to your sports card investing portfolio as these cards are big-time money makers. 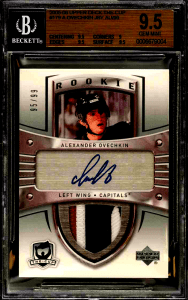 In a hobby that is dominated by baseball and basketball cards a hockey card managed to squeeze its way onto our list… pretty impressive considering a football card couldn’t make the cut.

Some may argue a Kevin Durant, Yao Ming, or Connor McDavid Upper Deck Card should be here instead of Alexander Ovechkin but we disagree.

We feel Ovi is the best player to lace up the skates besides Gretzky and he finally won his first Stanley Cup in June of 2018.

The card is extremely rare in high grades, has an autograph, a patch, and just looks super cool… it is one of the best looking cards we have ever laid eyes on… all these factors placed it number 5 on our list… us being big hockey fans also might have something to do with it eh 🙂 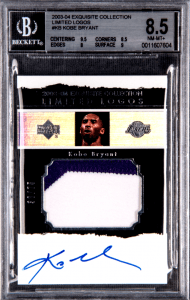 RIP Black Mamba… let it breathe… it seems Kobe cards have gained immense value ever since his tragic passing.

Not only is the 2003 Kobe Bryant Exquistive Collection Limited Logos card one of the best Upper Deck cards ever printed but it is probably our favorite Kobe non-rookie card as well.

What makes this card so special is the game-used letter patch… these patches drive collectors wild… not to mention it had a Kobe Bryant autograph as well.

The only thing stopping this card from being higher on the list is the small Kobe image.. only a headshot? Could have come a bit harder on that front.

Something about this card just oozes BUY ME! We love the layout of the card in lieu to mimic a ticket plus the fact it has an MJ autograph and a cutout picture of Michael in his classic jump shot form…

Overall just a very unique card with vintage undertones… we love it… G2G! 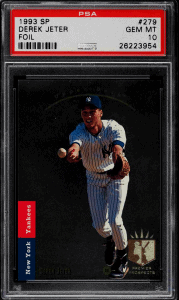 This bad boy is going to be the most valuable card on the list topping $100k in PSA 10 condition.

Value alone makes this card worthy of a sport on this list but it also has an unspoken beauty that shines in certain lighting… truly a masterpiece of a card. 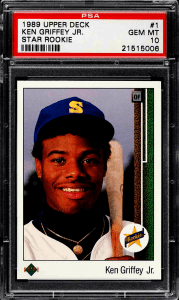 The Ken Griffey Jr. 1989 Upper Deck Rookie Card isn’t the most expensive card on the list but it the most iconic.

How can you go wrong with The Kid grinning back at ya with the bat swung over his left shoulder… you can’t!

This card got a generation of kids into the card collecting hobby and without it, the hobby may not be where it is today.

Thoughts? concerns? arguments? please leave a comment below or email us at info@goldcardauctions.com.