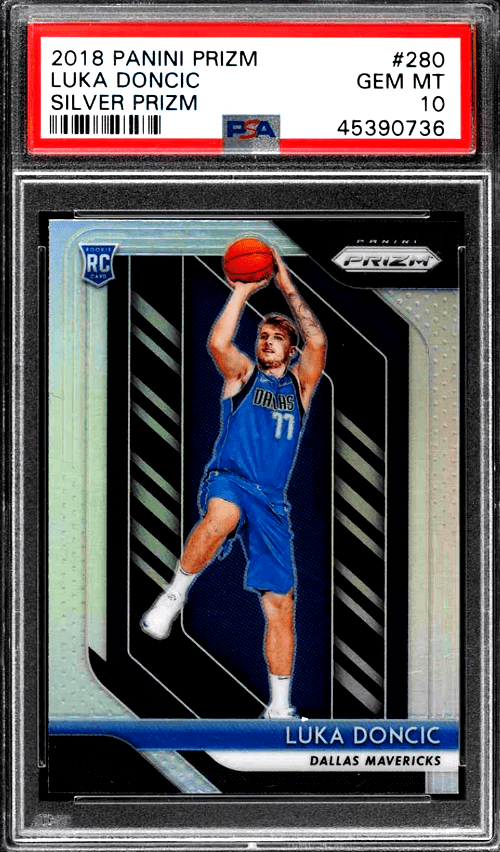 Another new year is on the horizon, and the collectible market remains strong when looking at the ever-increasing values of the best sports cards released in recent seasons.

We’ve identified five top sports cards to invest in for 2021, with a great chance of seeing profit as long as the players are able to maintain their current form across the calendar year.

There’s something to suit almost every budget, while we have taken care to include some of the biggest names from a range of different sports, just in case you’d prefer one instead of another.

The list contains five of the best sports card investments for 2021, listed in no particular order. We’ve also identified specific parallels for the cards, to make it easier to find the best overall choices. 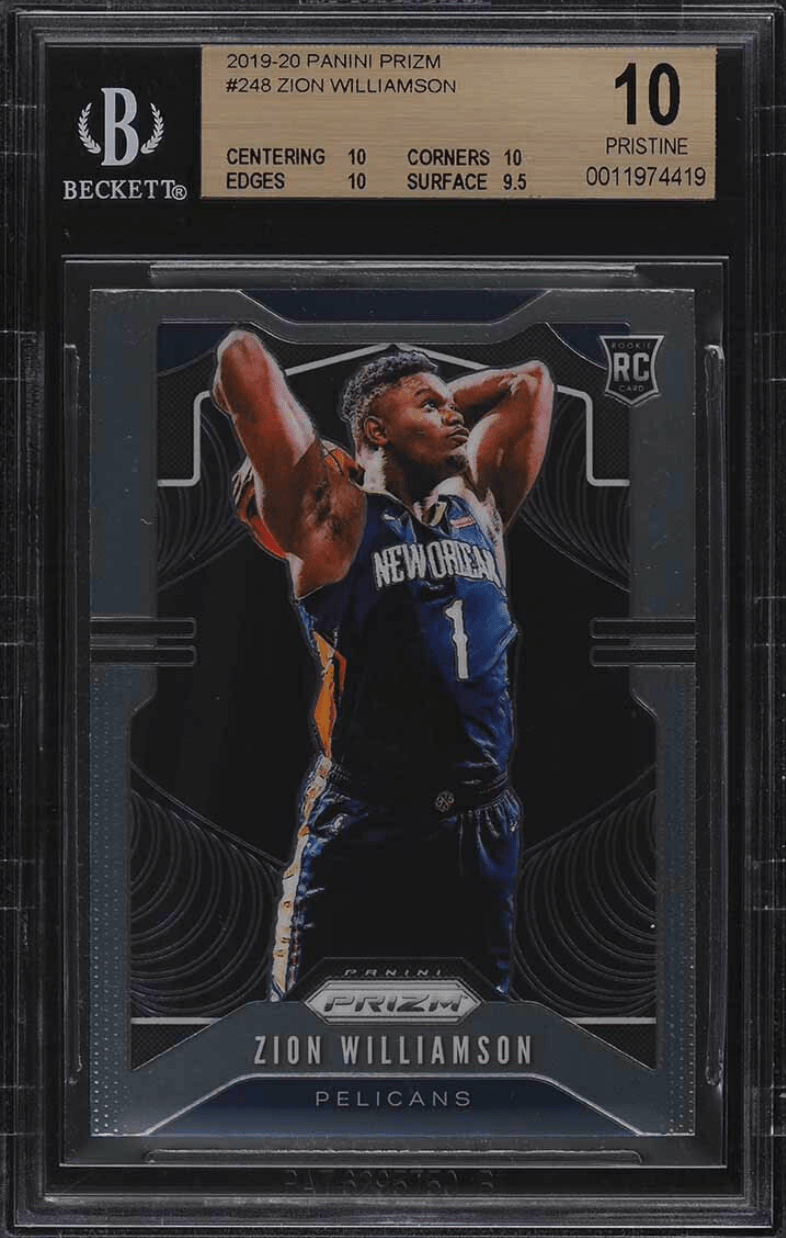 The 2019 Zion Williamson Panini Prizm release is undeniably a high-ticket item, especially when looking at parallels such as this Silver Prizm version.

The current face of the NBA, Williamson has scored a total of 711 points in his first 32 games. That total is the fifth-most by any player over the past 40 years, and it’s the highest since Shaquille O’Neal in 1993.

“The Silver Prizm is a popular collectible, offering a great mix of rarity and accessibility for the average collector.”

The first overall pick in the 2019 NBA draft is #248 in the 2019 Prizm set, and they’ve chosen a dominant image of the rookie as he holds a ball behind his head. There’s a crisp RC logo, along with a silver chrome border.

Luka Doncic’s 2018 Prizm is another RC that looks certain to make money if you can bag a copy of the Silver Prizm parallel for the right price.

The player recently led the Dallas Mavericks to a 77-27 lead at halftime over the Clippers, which is the largest ever for an NBA game.

He’s clearly the real deal, so it’s no surprise that one of his most popular rookie cards makes the list for 2021. It features a simple image of Doncic as he leaps up for a three-pointer, and it’s extremely popular with collectors and investors alike. 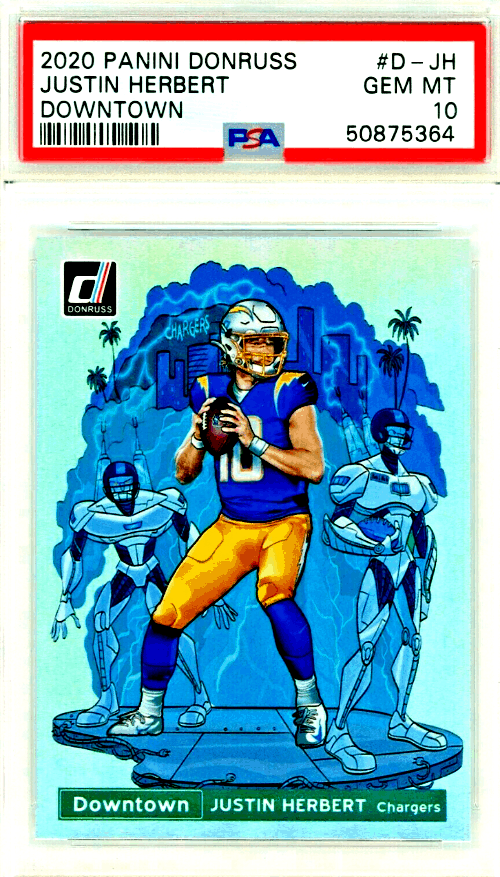 One of the best RCs from 2020 features Justin Herbert. Former NFL scout Daniel Jeremiah recently ranked the top 25 rookies this season and picked the QB as his top choice. He explains;

“Herbert shattered a number of rookie records — including touchdown passes (31) and passing yards per game (289.1) — and he’s already emerged as one of the top 10 players at his position. Oh, and he closed the season on a four-game win streak.”

READ
Joe Burrow RC vs Justin Herbert RC: Which Players Cards Will Be Worth More In 20 Years?

The Downtown subset consists of 40 cards, from Tom Brady to Joe Burrow. Herbert’s card features a stylized illustration of the QB as he clutches a football in both hands, with a futuristic blue background containing androids and L.A.

It offers something slightly different than a traditional RC and should be seen as another strong investment piece during the early stages of 2021. 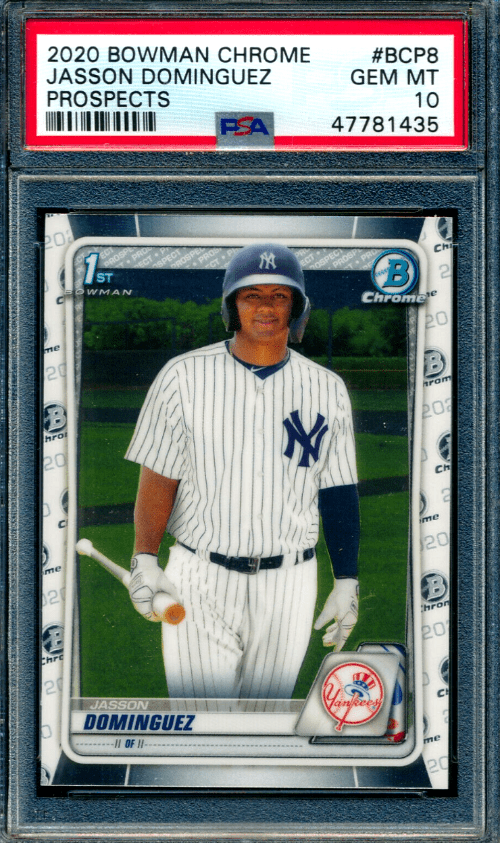 Jasson Dominguez is another great pick if you’re looking for the latest and greatest sports card investments. Vastly inexperienced compared to the others on the list, he makes it solely due to perceived potential. It makes for a riskier bet, but there’s a greater chance of increased returns if he continues to improve.

His 2020 Bowman Chrome Prospects card is an XRC, with a strong profile shot of the player in a classic New York Yankees white pinstripe jersey. You’ll also find an on-card auto at the bottom.

The base version is reasonably priced, although the same can’t be said for refractor parallels. 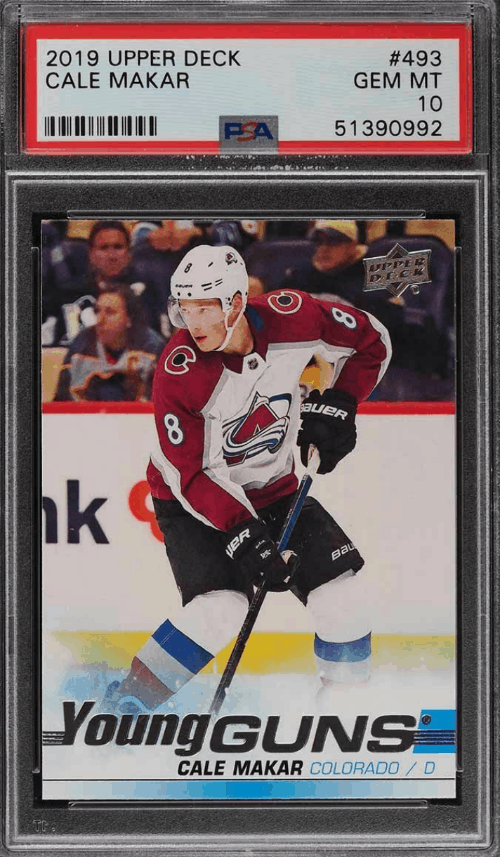 An incredibly popular RC from a must-have NHL set, Cale Makar’s 2019 Upper Deck is the final option to make the list. The NHL recently released their power rankings for the top second-year players for this season. Makar is number one on the list and projected to see sustained success. As the rankings note;

“Already an outstanding player with superstar potential. A great talent that is surrounded by a Stanley Cup caliber roster. He should have a massive season.”

Makar’s Upper Deck Canvas card features an action shot of the player on the ice, with a distinctive borderless design. Young Guns cards are always popular with collectors, and it goes for a fraction of the price compared to the Silver Prizms seen above. 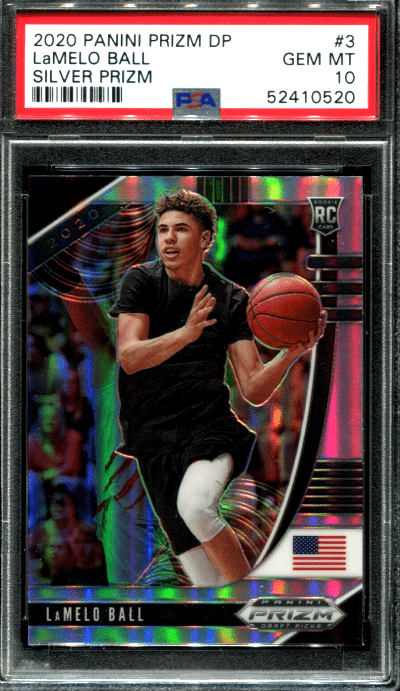 Stop the press! Were adding another card to this list!

We really wanted to add the 2020 LaMelo Ball Prizm DP RC to this list as we feel it has a chance to be the top returning card in terms of ROI in one year’s time. We would not be surprised to see LaMelo Ball rookie cards to behave similarly to Luka Doncic RCs did for the first year and a half… and… if… they… do… BOOM GOES THE DYNAMYTE!

6 Best Sports Cards to Invest in 2021: Summary and Investment Outlook

There are a number of good sports card investments that have the potential to make a profit over the next 12 months. Of course, there is an element of a risk considering they’re all young stars, but they’ve already begun to make a mark on their respective sports in some shape or form.

As always, we’d recommend sticking to graded versions whenever possible. The cards mentioned above are all recent releases, so it shouldn’t be too difficult to find copies that have achieved a mint seal of approval.