Pokémon cards were trendy in the late 1990s; during this time, many kids were interested in this new craze. The Pokémon market would become widely popular worldwide from 1999-2002.

During 2002, you began to see collectors/buyers lose interest, and only a select few people continued to invest in Pokémon. The release of the Pokémon go app in 2016 would spark new interest in Pokémon cards again, but it was not until 2020 that Pokémon cards seem to hit an all-time high in value.

In 2020, many collectors and buyers were taking a massive interest in Pokémon cards especially opening boxes and doing box breaks. This included both old Pokémon cards and new ones.

The time has come to examine the ten best Pokemon booster boxes known to mankind. Any questions in regards to Pokemon card investing can be directed to info@goldcardauctions.com. 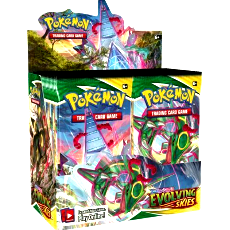 On August 27th, 2021, the Evolving Skies Booster Box was unleashed upon society, and the local card shops were jammed-packed.

It features 237 cards. Thirty-four of these cards are considered secret or rarer cards. Based on my research, the pull rates on this box seem to be 50/50; one ultra-rare appears to be pulled every three boxes.

According to TCG players, this set’s most expensive card is Rayquaza VMAX card number 218. The estimated value is $277.50 as of October 17th, 2021, in an ungraded mint example.

$800 will fetch you a PSA 10 grade. Only 150 of these exist in a PSA 10 thus far. This card is the most sought-after of this set. The rare secret cards of this set are the best long-term investments because they are considered ultra-rare. 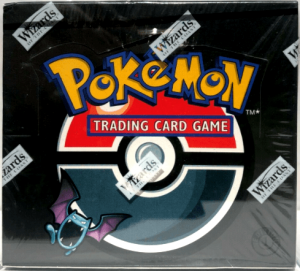 We have two words regarding the Team Rocket 1st Edition Booster Box. 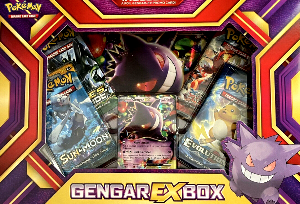 2016 XY Evolutions Booster Boxes came roaring out on October 31, 2016. Each booster box contains 36 total packs. This box’s pull rates guarantee one rare card and one holo card. A highly sought-after box as one can pull a high-end Charizard holo.

The best card featured from this box is the 2016 XY Holo Charizard, card number 11. This card is a similar design to the original Charizard released in 1999. Only 315 of these have been graded a PSA 10 example, making this card very sought after.

Pro-Tip: Always opt for PSA 10 if possible, as it generally has the top return on investment (ROI) in sports card investing.

Charizard will always have significant long-term value, and he’s regarded as one of the most popular characters in Pokémon. 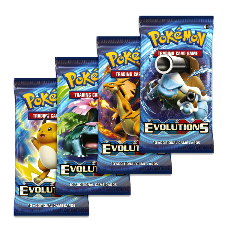 These boxes are costly and challenging to purchase as they are rare. So rare, we couldn’t find an image of one (packs are pictured above). 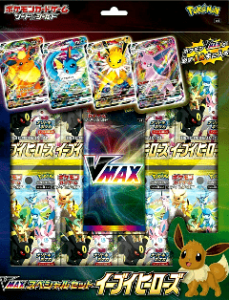 Japanese Eevee Heroes VMAX booster box was released on May 28, 2021. This box features 30 packs per box. The secret rare cards are considered the most sought after. This set features 69 cards plus 32 secret cards in total.

Pokemon Box Pull Rates: Not Great (But What Hobby Boxes Are)

The pull rates on this box usually feature one secret rare card per box, and hidden rare cards seem very difficult to pull.

The best card in this set is a FA/Sylveon VMAX, card number 093, which has also been described as hyper rare.

A graded PSA 10 example of this card is scarce; only 35 exist in that grade. This card will continue to become tougher to find, especially in a high-grade example.

This box was originally released on August 14, 2020. The box contains 36 packs featuring 189 cards plus 12 secret cards. The pull rate on pulling a Holo VMAX from this box is one in every 25.98 packs.

The best card from this set is card number 194 Salamence VMAX (Charizard). This card is considered a holo rare. There are only 316 PSA 10 examples of this card. A graded PSA 10 of this Salamence VMAX is still very obtainable for most Pokémon collectors.

This set was released in February of 2016 and contained 115 cards total (83 base cards plus 32 radiant collection cards). The significance of this set was that it marked the 20th anniversary of Pokémon at the time. The most valuable cards in this set are known as Pokémon-EX. The EX Pokemon cards have a four to five pull rate per box.

A card like this will always have great value because it commemorates the 20th anniversary. This is an excellent investment for any Charizard or Pokémon collector.

The original release of this box was on September 20, 2019. Ten Hidden Fates booster packs are in each box. The checklist of this box contains 68 cards plus one secret card. There is also a Shiny Vault Subset with 94 cards. The pull rate on the most sought-after card in this box is one in every 8.81 packs, which is a ten percent chance.

The most valuable card for this box is the 2019 Pokémon Sun & Moon Hidden Fates Shiny Charizard card number GX SV49. There are 3,264 PSA 10 examples of this card, but it’s still a highly sought-after card.

PSA 10 examples will cost $1,000+, and this card is regarded as one of the more popular newer Charizard designs in recent years. This is a great card to buy for any Charizard collector!

The newest box on this list was released on October 8th, 2021. This box is often referred to as ETB (Elite Trainer Box). You will find ten Pokémon Celebration Booster packs in the box.

This box commemorates Pokémon’s 25th anniversary; the set is 25 cards total and features reprints of cards you can get out of the booster packs. This box is so new that there have not been verified pull rates to be determined, but the reprint cards from booster packs appear to be the most sought-after.

Umbreon is arguably the most sought-after card featured in this box. This is card number 17 and is considered one of the featured reprint cards from booster packs. Ungraded examples are already $100+, a great card to buy, and have graded by PSA.

This set features 147 cards and 22 secret cards, it was released on August 4th, 2017. The pull rate of pulling a secret card is less than one percent. Rare Holo Gx cards are the most sought-after cards in this box.

The most sought-after card in this set is the Gx Secret Charizard card, number 150. A PSA 10 example will cost you 3k plus. This card is very popular and has a unique design in this set.

According to the PSA Population Report, only 749 PSA 10s of this card exist. This is another must-have Charizard card for any Pokémon collector.

This set was released on November 13th, 2020, and featured 185 cards plus 18 secret cards. The VMAX cards are the most sought-after in this box. According to the pull rates, you have a four percent chance to pull a rare Holo VMAX card out of a box.

The most sought-after card in this box is the secret VMAX Charizard, card number 74. The card features a rainbow-themed design and is an excellent card to buy in a PSA 10 example. A rare Japanese version of this card is also featured in a Promo card.

This card has a PSA Population Report of 6,975 PSA 10 examples. This is another great Charizard to add to your collection. 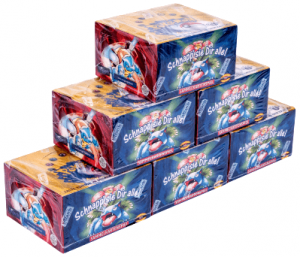 Charizard is referred to as “Glurak” in the German version and is the most sought-after in this box. The Charizard is card number four and a rare holo of the set.

This card is scarce, and only 50 of these exist in a PSA 10 example. This is a high-end card considered one of the premier Charizard cards of all time. This card is very iconic and will only become even tougher to find.

Logan Paul has invested heavily in similar high-end Charizard cards like this!