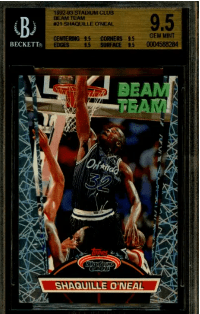 No disrespect to the older generation, but modern NBA players are bigger, stronger, faster, and more agile than in years past.

In other words, Shaq would eat Wilt, Russell, and Kareem for breakfast and then ask for seconds.

The NBA has been graced by many a big man over its seventy-plus years of existence. Every great big man deserves a great trading card to match.

With this list, we bring your attention to the best “Big Man” cards that money can buy. Unlike the big men themselves, these cards will fit perfectly in any collection.

From the old school to the new, you can’t go wrong with these legendary cards featuring legendary bigs.

The first of the modern-era big men to make this list, Shaq’s 1992 Topps Gold RC #362 was technically printed in the Junk Wax Era. Its strong value is a testament to Shaq’s immense status in basketball and collecting circles.

Therefore, there is a hefty supply of this card. Despite its epic photo and Shaq-centricity, it’s an affordable investment.

Because of its affordability, bidders seek out this card in droves. If you can get one, you might experience solid returns down the line. 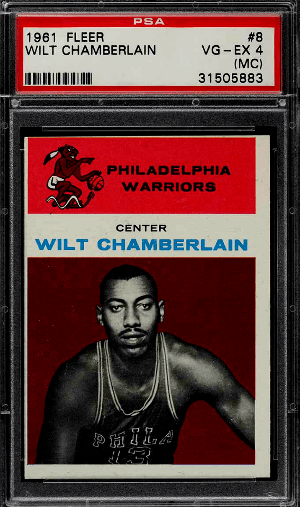 Like the 1957 Bill Russell Topps RC, the 1961 Wilt Chamberlain Fleer Basketball RC #8 is the only recognized rookie card for an all-time great big man. And cocksman.

As the lone dog of Wilt rookie cards, this one is intrinsically valuable. Gem Mint copies are very rare, and owning one of them means that you are sitting on an absolute gem.

Similar: 7 Most Hated NBA Players of All-Time – The Cards

The card’s not bad lookin’, either.

It features a black-and-white image of a fresh-faced Wilt the Stilt. Chamberlain stares directly into the camera, seemingly dribbling with his left hand in a “PHILA” uniform.

The card’s layout is untraditional, with a white nameplate nearly splitting the card in half. Above it is a “Philadelphia Warriors” logo plate, harkening back to a time before the 76ers existed.

It’s not a stunning card visually, with a maroon and orange color scheme doing no favors. Still, the price tag and promise for ROI will certainly get investors’ juices flowing. 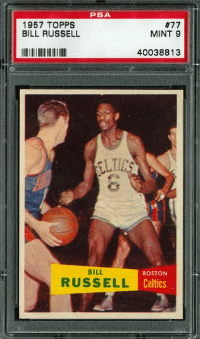 The 1957 Bill Russell Topps Baseketball SP RC #77 is the cream of the crop of NBA big man cards. It’s the only recognized Bill Russell rookie card, and its age makes it a highly condition-dependent commodity.

The card itself is iconic. Somehow, the color in the photograph seems almost unexpected considering how old-school the image on the card is.

A lanky Russell sports skin-tight, short-shorted Celtics uniform of the 1950s era. It’s easy to see why Russell dominated his era based on this image alone.

Aside from a pencil-thin white border, the only feature on this card is a two-tone nameplate. The stretched, rectangular, red-and-white plate fits nicely with the card’s overall aesthetic. 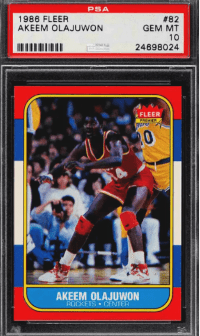 We know this is the case for Hakeem Olajuwon’s 1986 Fleer Basketball RC #82 because the card does not even spell his name correctly. The card’s name placard reads “Akeem” rather than “Hakeem”.

The 1986 Fleer basketball contains a number of stellar rookie cards, and Olajuwon’s is among the standouts from the set.

The card shows The Dream establishing post position, bent at the waist with his rear-end shielding the defender from an impending entry pass.

The design has aged extremely well. A relative abundance of Gem-Mint copies means that this isn’t the rarest big man card on the market, but it is one worth owning. 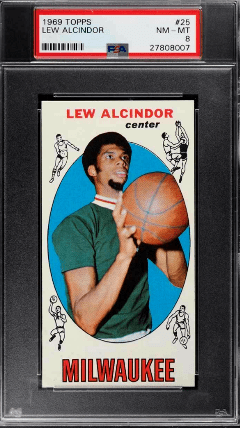 Before he was Kareem, he was Lew. Thus, the 1969 Kareem Abdul-Jabbar rookie card was printed with his given name: Lew Alcindor.

That’s right, the 1969 Lew Alcindor Topps RC #25 is the only universally recognized Kareem rookie card on the market.

It features a rail-think Alcindor in a nondescript green t-shirt with a neck-tight red-and-white collar. He grips a worn, logoless basketball with never-ending fingers that resemble the gangly legs of a spider.

The card’s dimensions are untraditional, with a stretched rectangular shape that mirrors Kareem’s own verticality. A circular blue border is a partial backdrop for Alcindor’s image.

The remaining area of the card is stark white, with caricatured basketball players positioned in a rectangular formation around Kareem’s photo.

Mint and Gem-Mint copies are in short supply, making this one of the costliest basketball cards of its era. 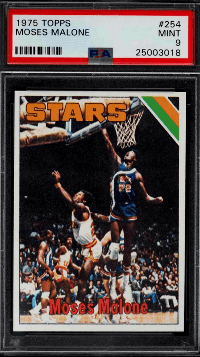 Hall of Famer Moses Malone carved out a stellar ABA-NBA career that crossed into three separate decades. His 1975 Topps Basketball RC #254 is a price-friendly gem.

The image on the card encapsulates 1970s basketball. It features a full-card portrait of skying for either a rebound, dunk, or layup.

The card is primitive by modern-day standards, featuring only an orange “Stars” graphic, a red “Moses Malone” nameplate down low, and a green-and-yellow stripe bisecting the upper-right corner.

There are just enough Mint and Gem Mint copies of this card to keep it in the price range of the everyman. 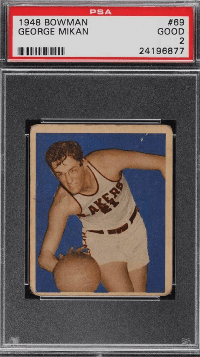 As one of the game’s earliest superstars, rare Mint and Gem Mint (there’s only one on record) copies of this card are a collector’s pipe dream.

It’s clear that the card was produced in the WWII era just by looking at it. A nearly square shape and ultra-plain design are dead giveaways.

A bespectacled Mikan, who looks like he just left a lecture that he was teaching, dribbles awkwardly with his right hand. He sports a white Minneapolis Lakers jersey with blue and red trim.

It even appears that Mikan is wearing a…belt? Yep, this card is old.

Blue background and white border are the only design features to speak of. You’ll have trouble tracking down well-graded copies of this card that don’t cost more than your house.

If you can swing it, betting on the Hall-of-Famer Mikan is always a sound decision. 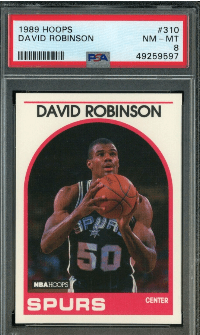 Panini’s NBA Hoops has become one of the most popular NBA sets today, and its popularity dates at least as far back as the 1980s. Exhibit A: the 1989 David Robinson Hoops #310 RC.

#310 shows Robinson hunched slightly at the free-throw line. His broad shoulders are square and his eyes are focused on the rim as he holds the ball near chin-level in his left-handed stance.

Related: David Robinson Rookie CardThe card has a unique design, with a red-bordered archway cropping the border of Robinson’s image. A “David Robinson” nameplate sits atop the archway, with a red line atop the nameplate.

A white, bold “Spurs” team designation rests within the bottom border of the archway. It’s a cool design that was common to the 1989 NBA Hoops set.

However, it remains one of the more visually enduring big man cards to date.

Willis Reed is a giant of New York basketball, a legend that the old-timers revere and that younger fans may be largely unaware of.

Collectors should be aware of the 1969 Willis Reed Topps Basketball RC #60. Produced in the same year as the Lew Alcindor rookie card we’ve already highlighted, the two cards also share a design scheme.

Reed rests a logo-less basketball on his left knee, both hands balancing it (though one would surely suffice).

Reed’s name appears on the front of his Knicks jersey which, unless we’re missing something, was not customary during either games or card photoshoots.

Reed’s expression gives nothing away. The remainder of the card is playing-card-like. A read ovular background backs the image of Reed. Four cartoon images of basketball players surround Reed’s photograph.

Reed’s hobbled return to the court at Madison Square Garden in Game 7 of the 1970 NBA Finals remains one of the all-time basketball moments.

As one of the most dominant big men of his era, Patrick Ewing deserves a spot on this list. Though he could never get over the Championship hump, he makes the cut here thanks to his 1986 Fleer RC #32.

One of the many notable rookie cards in this set, it features the iconic red, white, and blue border. The card’s design works particularly well with the Knicks blue-and-orange jersey scheme.

A massive Ewing jogs down the court, mouth agape. He lacks the bulk that he would carry later in his career, instead of showing zero signs of body fat in his #33 Knicks garb.

Other touches on the card’s front are a blue-and-white nameplate and a small Fleer Premier crown logo in the upper righthand corner.

There are hundreds of Gem Mint copies of this card available, but it’s an impressive card nonetheless.

If you’re going to invest in sports cards, why not go big?

These cards range greatly in price, but they’ve all share a few common traits: nice design and a legendary big man to anchor the card’s value being among those commonalities.

You can’t err when you’re investing in the cards we’ve listed here as they are some of the best NBA players of all time just not the center position.