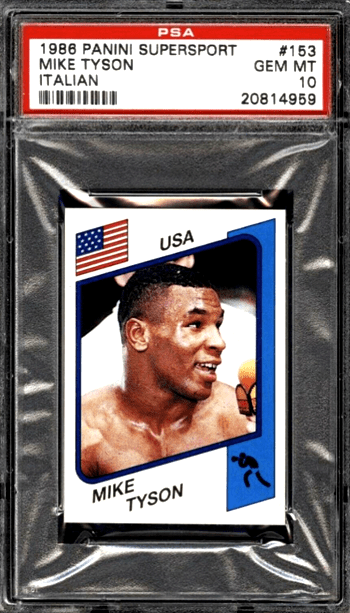 Michael Gerard Tyson (6/30/1966) was born into poverty in Brooklyn, NY. Under manager Cus D’Amato, Tyson would rule the boxing world. Iron Mike’s defining characteristics as a boxer were his rapid fist speed, lights-out knockout power, and ability to absorb punches without incurring significant damage.

Iron Mike’s defining characteristics as a boxer were his rapid fist speed, lights-out knockout power, and ability to absorb punches without incurring significant damage. Tyson’s accolades include becoming the youngest WBC Heavyweight Champion, holding all three major Heavyweight belts at once, and ten defenses of his title.

Ultimately, Tyson will be remembered as one of the most feared boxers to strap on the Everlasts. We’ve decided to acknowledge Kid Dynamite’s greatness the only way we know how: by presenting the best Mike Tyson cards you can buy.

The following cards stand out from alternatives because of rarity, value, appearance, and other noteworthy properties. If you don’t like any of the selections, please don’t tell Mike. 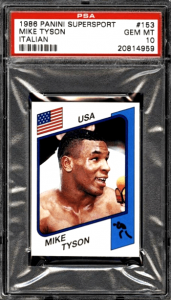 There is a certain innocence about the 1986 Mike Tyson Panini Supersport #153, and collectors are clearly drawn to this relic from before Tyson was Iron Mike. The card was initially a European release (the Panini Group was founded in Italy) but has made its way across the pond since then.

The card is technically a Sticker and shows a fresh-faced Tyson looking to his left, a yellow microphone hovering inches from his face. Beads of sweat dot his forehead post-bout.

The card’s design is simple but timeless. A slanted blue border frames Tyson’s image. A USA flag emblem, nameplate, and stick-figure of a boxer complete the design. This card’s value has taken a sharp upward trajectory as it’s one of the market’s earliest iconic Tyson cards. 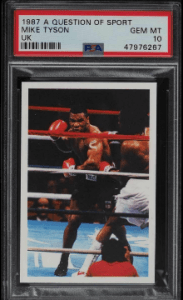 One of the most uniquely named cards in Tyson’s catalog comes with an equally odd backstory. This card was included as part of a UK-derived board game called A Question of Sport. The board game was a spinoff from a TV trivia game of the same name.

Perhaps because of this story, the 1987 Mike Tyson A Question of Sport has become one of the most popular Tyson cards. It shows Tyson, only two years into his pro career, after presumably connecting on a left hook. His face displays rage while his compact frame appears to be all muscle.

The image is the card, with a white border being the only feature. The card’s rear is equally nondescript with a tri-colored border and a small “Mike Tyson” nameplate. It’s a beautiful portrait card that has grown among the most popular in Tyson’s stable of early offerings. 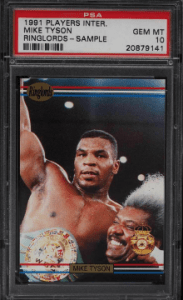 The 1991 Mike Tyson Players International Ringlords card features one of the most iconic images of Tyson you’ll ever see. The card lets the image do the work to its makers’ credit. Tyson wears the WBC Championship belt; his right hand extended high as promoter Don King grins beneath Tyson’s right arm.

Players International included only a nameplate, red-white-and-blue border, and a couple of logos on the front of the card. Tyson is very much the focus. The image captures Tyson just before impending turmoil. He would lose his Heavyweight title in 1990, making this card a time capsule.

This card comes in versions that either have a “Sample” sticker on the back or do not. The cards without the sticker are comparatively rare. 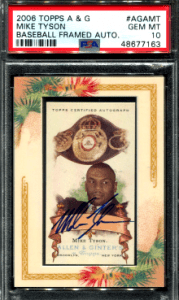 The image of Tyson extending a belt in the air appears to be a true picture but is colored in a way that feels like a portrait. This is thought to be the first official Tyson autograph card, was limited to 200 copies, and is part of the Allen & Ginter-Topps debut set. For all of these reasons, you want to own this one. 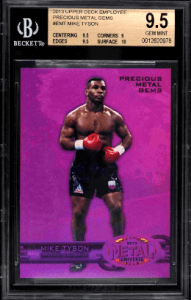 This card really does feel like high art, a miniature portrait you could hand in your study. Numbered to 10, it’s exceedingly rare and valuable. The purple backdrop clashes brilliantly with the black-boxing shorts on Mr. Tyson.

During researching this article we found this beautiful card and are considering adding it to our best sports cards to buy now list. 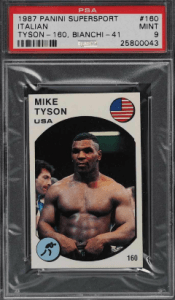 This is the second-year Mike Tyson Supersportcard produced by Panini. While this makes it second to the 1986 version, it’s a highly valued card. Like other early Tyson cards, this one has few notable features. A muscular Tyson stands with both hands clasping his shorts, rocking both a fresh cut and a serious expression.

A clean white frame covers a double-arched border. A circular American flag, Mike Tyson nameplate, boxer logo, and “160” are the only stylings on this card. The card carries prestige as one of the earliest Tyson cards/stickers from a reputable manufacturer. 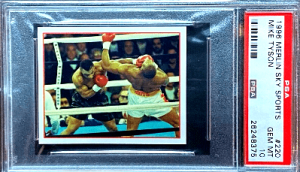 The 1996 Mike Tyson Merlin Sky Sports boxing card is among the more challenging cards to find on this list at high grades. If you do happen upon it at a reasonable price or up for auction, we suggest making a bid or purchase—a great little card with a big-time punch to the dome. 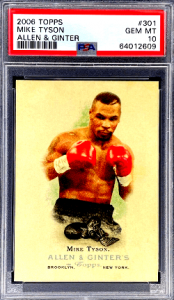 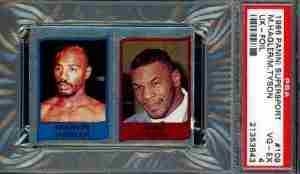 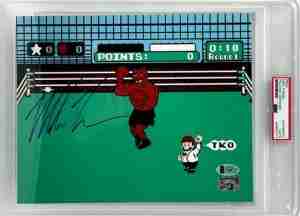 This Mike Tyson piece of memorabilia would be much higher on our list if it were an actual trading card. The photo is from the Nintendo game but still a super cool piece and won we just purchased while doing research for this article. 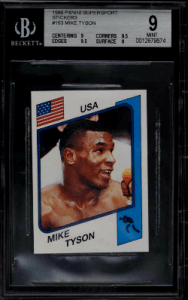 Want advice in regards to buying sports cards? Email us at advice@goldcardauctions.com, and we will be more than happy to chat.

As boxing has faded from the national consciousness, Mike Tyson has contrastingly become more and more beloved. This is a positive for anyone who owns Tyson’s trading cards.

The declining popularity of boxing means that no new-age stars—not Mayweather, Wilder, Fury, or otherwise—threaten to overshadow and undercut the value of Tyson’s cards. With little competition in the space, the sky is the limit for the future value of Mike Tyson cards, particularly those that are most rare and treasured.