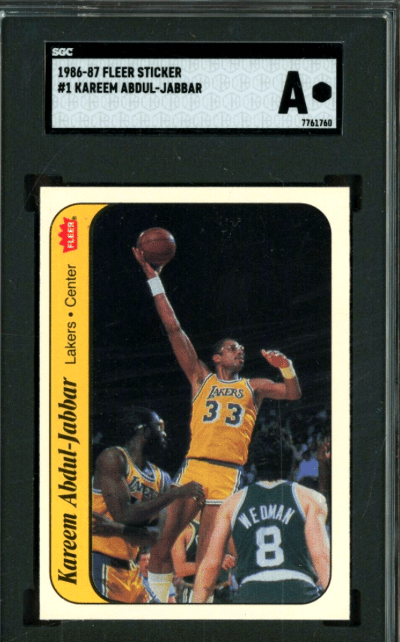 The Lakers are one of the NBA’s flagship franchises. From Minneapolis to Los Angeles, the Lakers’ history runs deep.

Naturally, the players that have worn the Laker uni, therefore, have left a trail of high-priced cards in their wake.

Preemptive apology to modern Laker fans: we’ve compiled a list of the most valuable Laker player cards during years that they were Lakers. LeBron’s rookie card doesn’t qualify, nor does Shaq’s. Kobe’s does, though.

Reader note: we included each Laker on this list only once.

“All-time” is a serious distinction befitting names like Magic, Kobe, and Kareem. We didn’t choose these cards lightly. 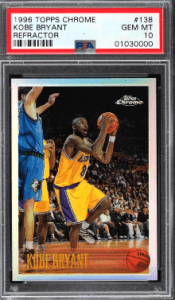 There’s no doubt that Kobe’s tragic passing sparked demand for his rookie cards and in March 2021 a perfectly rated copy of this card sold for $1.795 million.

The card’s portrait-style layout is classic. Bryant steps towards the basket in his gold Lakers uni, ball held at head-level and mouth wide open.

The refractive sheen captures the eye, creating a rainbow effect on the border and making the gold Kobe Bryant nameplate pop.

Even less-than-perfect copies of this exemplary Kobe rookie card will cost you big. 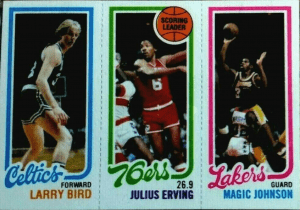 One of the most well-known basketball cards, the 1980 Magic Johnson Topps Scoring Leader RC also features Larry Bird and Julius Erving. That’s right, three for one.

The image of Johnson occupies the right third of the card. He floats gracefully with his right arm extended, mid-floater with the ball resting in his palm.

The cursive “Lakers” font gives the card a playful feel. The card contains perforations where the individual player cards could be torn apart. This makes the intact cards even more valuable.

A PSA 10 copy of the card sold in 2018 for $125,000, and the value has almost certainly exploded since then. Perfectly-graded copies come at a premium, as their pool is limited. 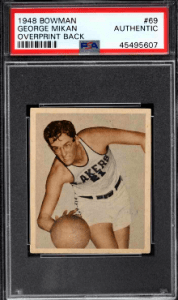 It’s hard to argue, considering that copies have sold for more than $320,000 and $400,000, respectively. It’s one of the most valuable basketball cards on the planet (see Michael Jordan Cards).

The 2 1/16th” by 2 1/2″ inch shape gives it a unique, almost square appearance. A bespectacled Mikan, hardly the typical image of an NBA athlete, dribbles awkwardly with his right hand.

A blue background and white border are all you’ll get with this card (it was 1948, a time when cards were far less ornate). Heck, the Lakers weren’t even in Los Angeles then. 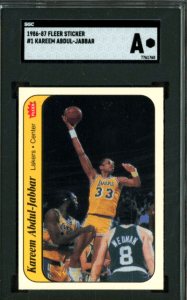 We don’ have a Kareem Abdul-Jabbar (né Lew Alcindor) rookie card listed (the 1969 Lew Alcindor Topps RC #25 specifically) because he didn’t play for the Lakers as a rookie.

So, the rules being what they are, we present the 1986 Kareem Abdul-Jabbar Fleer Stickers #1. Like most of the entries on this list, the value of this card depends largely on its grade.

The card’s image is indelible, showing a fully extended Kareem about to release his lethal Sky Hook. A vertical yellow nameplate features his name, team (Lakers), and position.

There are relatively few Gem-Mint copies of this card in circulation, making those cards potential goldmines for collections. 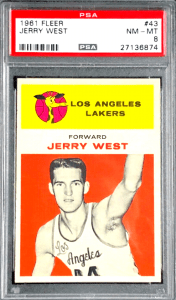 There is some debate over whether the 1961 Jerry West Fleer RC #43 is the earliest West RC. Some consider the valuable 1960 Kahn’s Wieners Jerry West RC to be legit, while others don’t.

Because it’s more widely accepted by hobbyists and is valuable in its own right, we’re going with the 1961 Jerry West Fleer RC #43.

It shows the man known as The Logo crouched with his left hand in the air and his hair cropped tightly.

The card’s design is sneaky nice, with a crisp orange-white-yellow color spectrum.

A nameplate is wedged between West’s image below and the “Los Angeles Lakers” type above.

West is a Lakers icon, making his mark as both player and executive. The immense value of this card reflects West’s legendary status.

Even poorly-graded copies of this card secure decent returns. Those with a grade of 8, 9, or even 10 can command a modest-to-cushy retirement fund’s worth of dough. 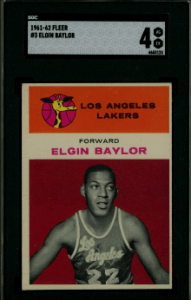 The 1961 Fleer basketball set contains yet another standout rookie card: that of Elgin Baylor, who the Lakers selected first overall in the 1958 draft.

The card has the same design as the Jerry West Fleer RC, but the color scheme differs. The Elgin Baylor Fleer RC #3 has a maroon, white, and orange spectrum (from bottom to top).

As the only widely-recognized Baylor rookie card in a set plagued by production issues, you can expect a well-graded copy of this card to cost a small fortune. 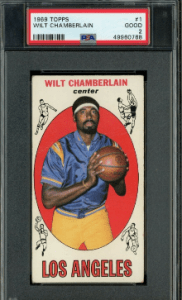 For one, its status as the first card off the printer means that there are very few highly-graded copies in circulation (adding to its value). It’s also one of Wilt’s earliest cards as a Laker.

Then there’s the attractive design. A tall, skinny card, it shows a headband-clad Wilt holding the rock in powder blue and yellow sweats.

A circular red shadow and (cool?) caricatures in each corner contribute to the retro vibe. This is, undoubtedly, one of the best Laker cards you can find.