Juan Soto’s rookie cards are a top-rated investment and are a solid option for long-term investors looking for huge profits. Soto is only 22 years old, already considered one of the best players in the league, and has a World Series ring. 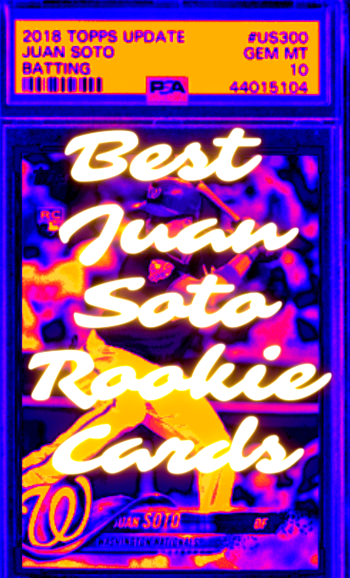 Juan Soto (10/25/98) is a Dominican outfielder who plays for the Washington Nationals. He spent a couple of years in the minor leagues after signing for the Nats, making his MLB breakthrough in 2018.

Soto immediately impacted the Nationals and helped guide them to the team’s first-ever World Series, ironically the 1st year after Bryce Harper departed for the Philadelphia Phillies.

The grass isn’t always greener, is it?

Here’s a rundown of five of the best Soto rookie cards to look out for, along with some rookie card investment advice. 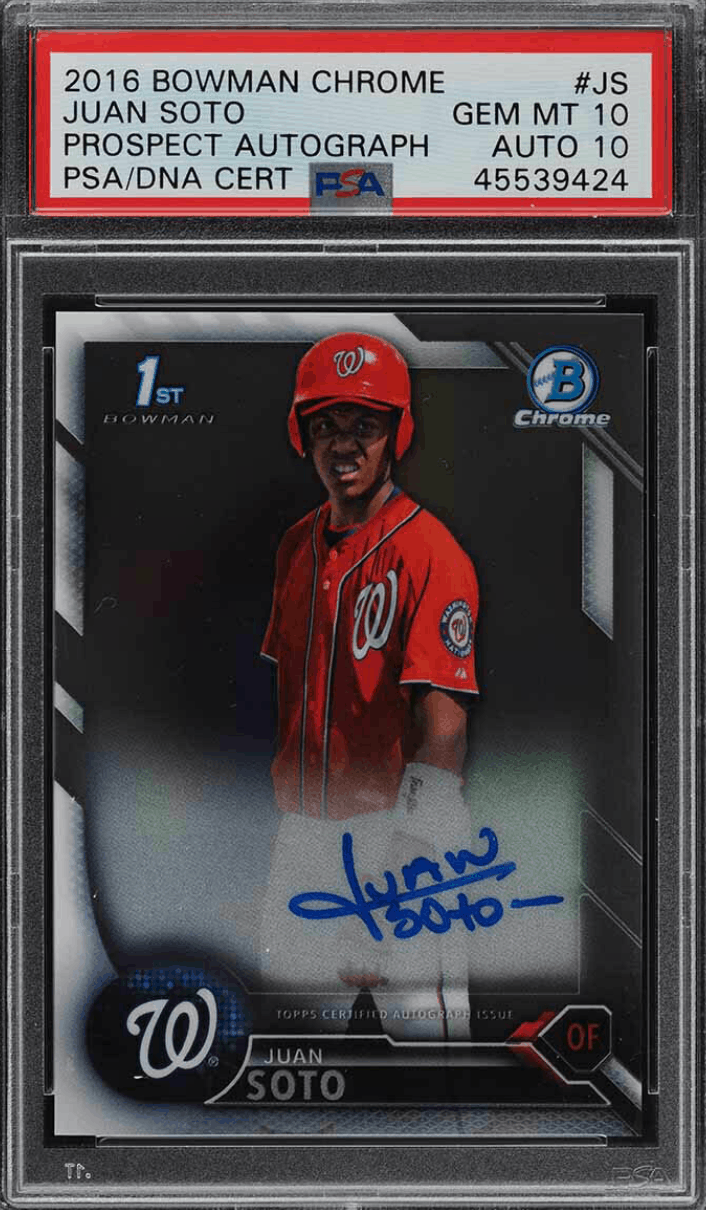 There’s no better place to start than with Soto’s 2016 Bowman Chrome RC. It’s his first-ever rookie card, identified by the Bowman 1st logo on the top left corner. You’ll find an image of Soto standing tall as the card’s focal point, along with a prominent signature at the bottom.

The reverse is packed with info, including scouting notes about his dangerous left-handed swing. Despite being the oldest card on the list, it still comes with several expensive colored parallels. 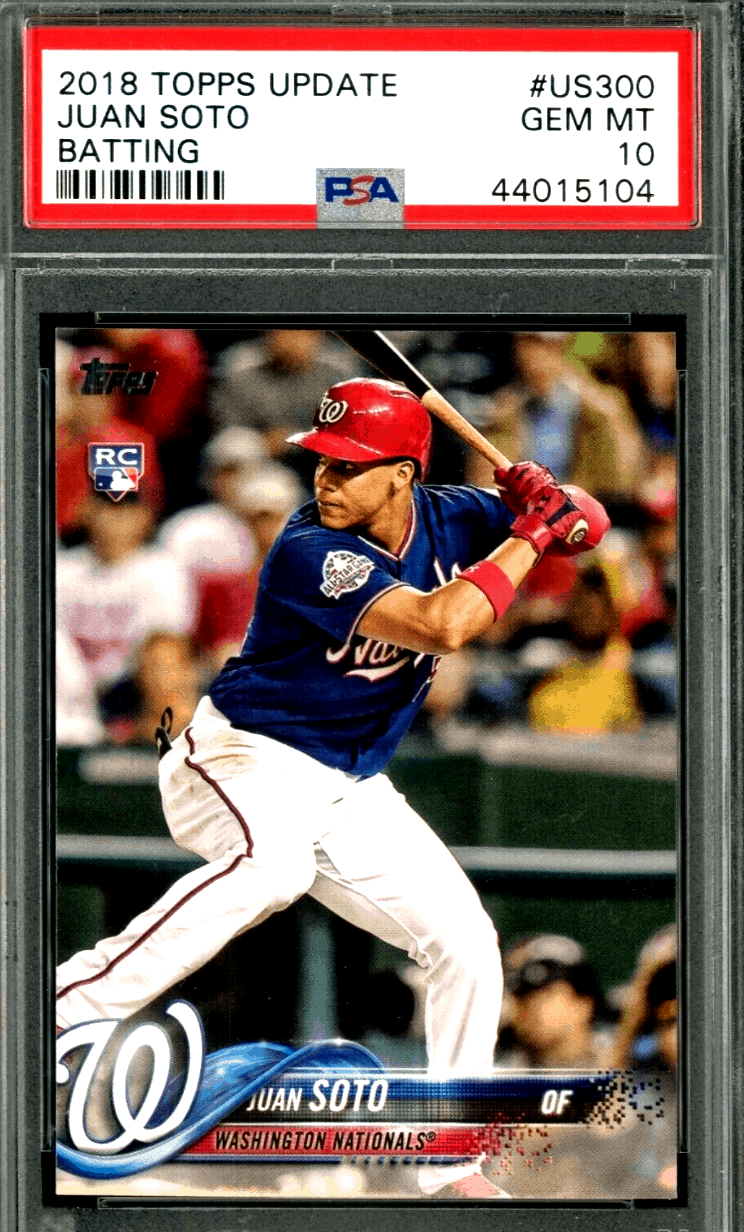 Soto’s 2018 Topps Update is up next. The card features a large action shot of the player, ready to swing, while there’s an RC logo on the top left-hand side. The reverse is packed with lots of stats, extra info, and his minor league batting record. 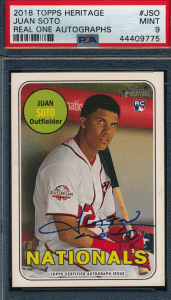 An autographed card, 2018 Real One, features Soto posing for a photo while seated in the dressing room. He has his bat in hand, and you can see his All-Star Game shoulder patch in the image.

There’s an RC logo located on the top, adding further value. It’s a great card packed full of color, and it looks like a throwback to past editions.

The back has a list of his minor league batting records and info about his debut at 19 years of age. A red ink version also exists, although it’s limited to just 69 copies. 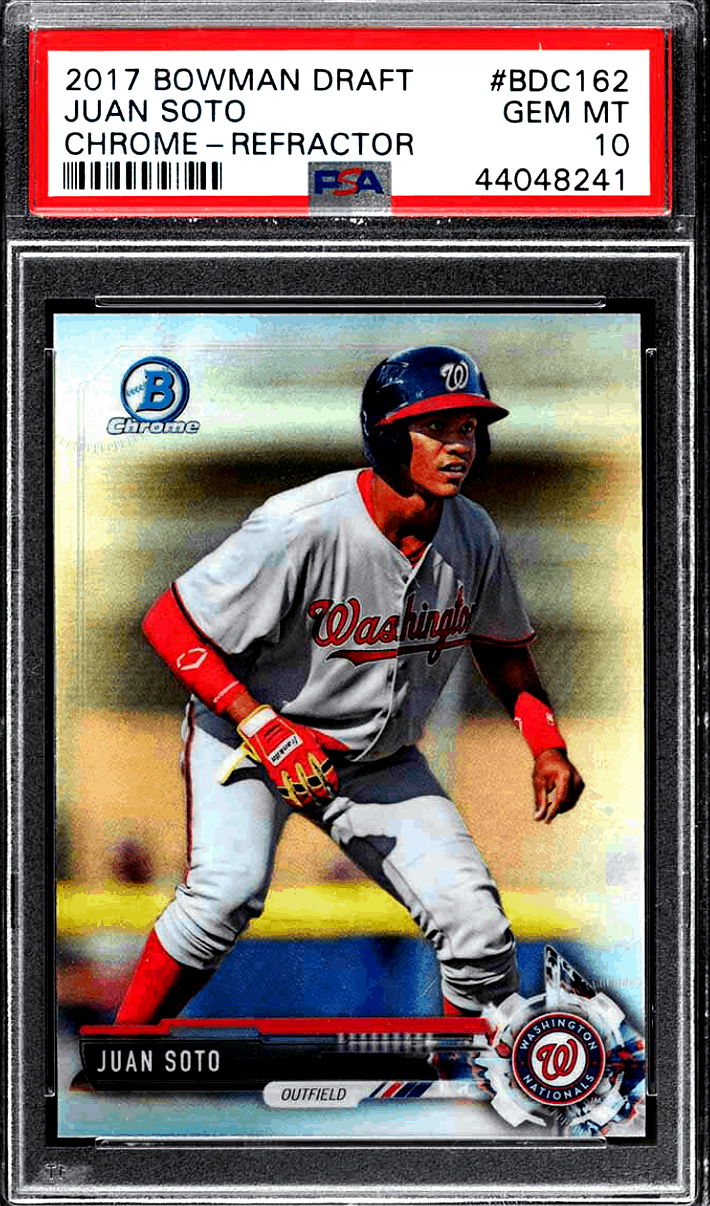 There seem to be one hundred and one Bowman Chrome Soto rookie cards; all are great-looking investments. The 2018 Soto Bowman Draft Chrome RC is no different. 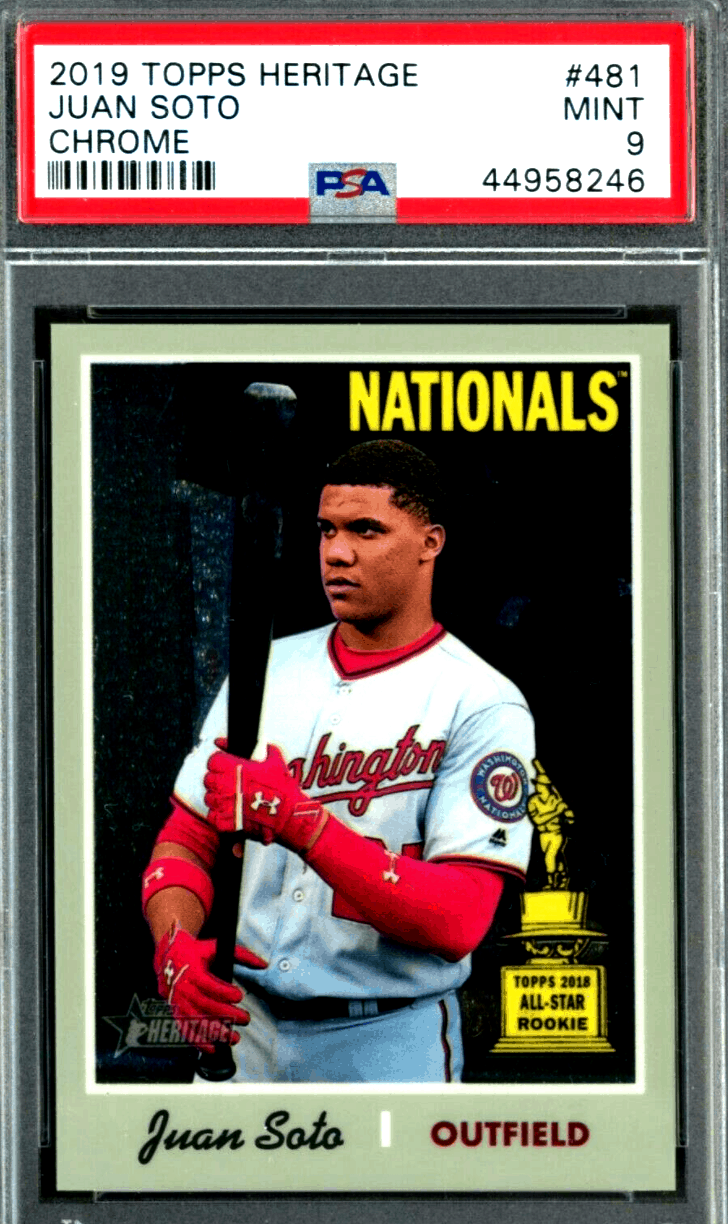 The 2019 Soto Heritage Chrome All-Star RC is a solid option if you’re looking for something more affordable.

A great card for a smaller fee, we see it as a viable entry-level Soto card for moderate investors. There are also some rare refractor parallels, including a Black version limited to 70 copies. 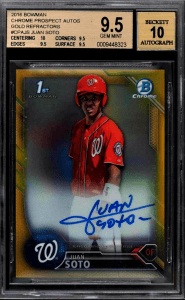 Soto’s rookie card values should soar for the next few years. If he wins another World Series ring, the value of his cards will take off.

If you want to receive an estimated value of your Juan Soto rookie card, please post it in the comments section below (assuming it’s graded). If the card is not graded, please email us a minimum of two photos to value@goldcardauctions.com.

If you are on the fence about buying a high-end Soto rookie card and would like advice, please email us at advice@goldcardauctions.com, and we will help. 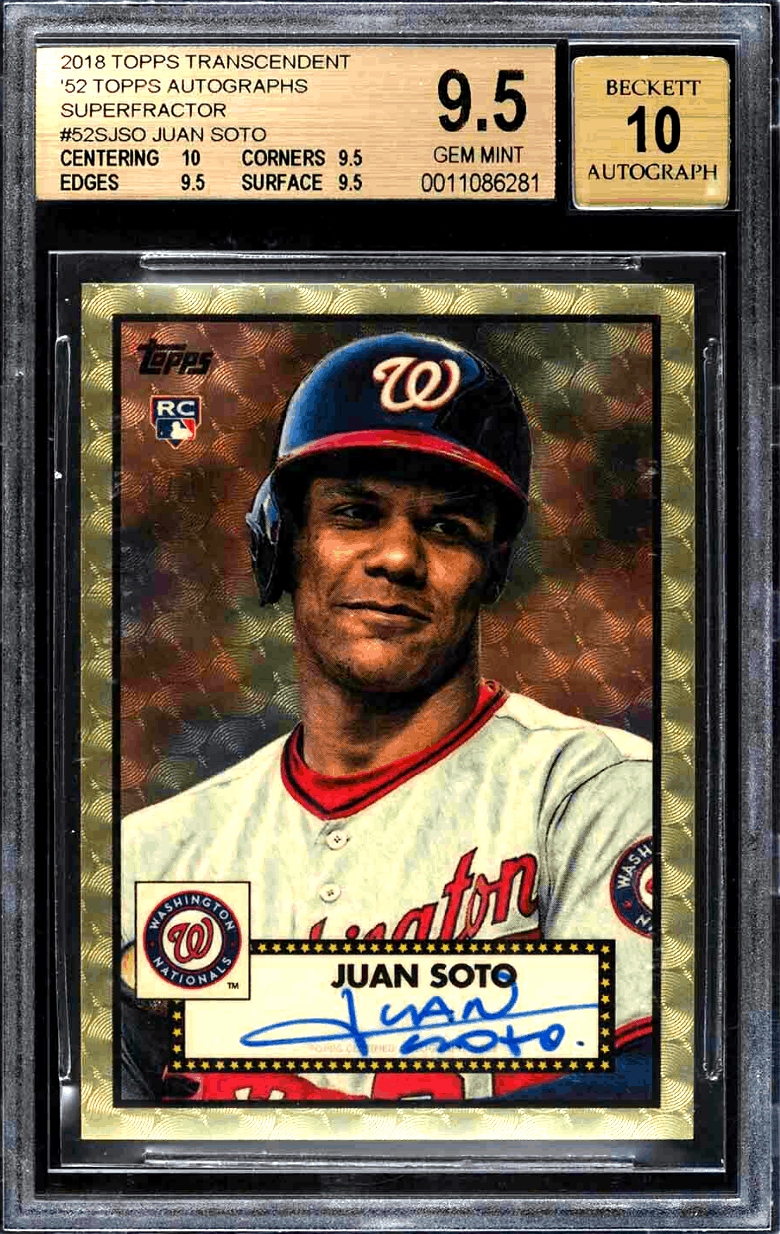 His incredible 2019 season had a knock-on effect, causing many of his earlier rookie cards to drastically increase in price.

The “Soto Shuffle” might be a bit of a meme, but it does help to psyche out opponents, making him even more popular with casual fans.