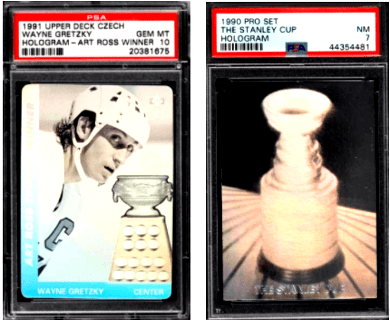 Holo sports cards have been popular since the early 1990s, as manufacturers experimented by producing images that appeared to move in the light.

The end result is often eye-catching, although it does tend to lead to condition-related issues in the long run.

We’ve come with a rundown containing 20 of the best holo sports cards of all time.

A variety of players and sports manage to make it onto the all-time list. 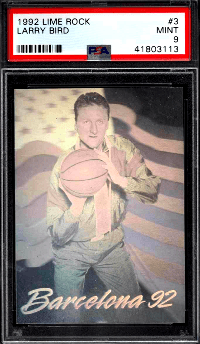 Larry Bird is the first player surrounded in holofoil.

The 1992 Larry Bird Hologram Card set contains three holo images of the player and should come with a certificate of authenticity attached.

Packaged in a black and gold box, the certificate notes that it was limited to 250,000 sets, with a total of 3,000 promotional cards.

2,500 cards have also been signed by the Celtics star. 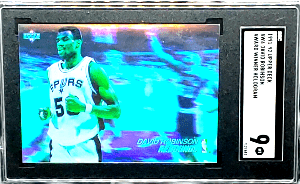 Next up is San Antonio Spurs legend David Robinson.

Robinson is the sixth subject, with a landscape image that notes his inclusion for rebounds at the bottom. (In the 1989–90 NBA season he averaged 12 per game.)

It’s a dark card, but the subset paved the way for improved holo cards in the future. 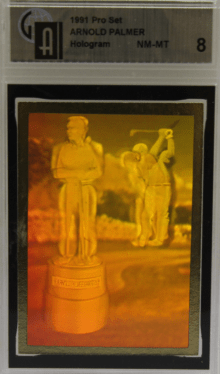 Arnold Palmer is seen as one of the greatest golfers in the history of the sport.

He’s recognized in this 3D-effect card from the 1991 Pro Set which has a distinctive green hue.

Palmer is seen in the background, with the award placed in front of him to the left. He’s in the midst of a swing, with the position changing depending on the angle the insert is viewed from. 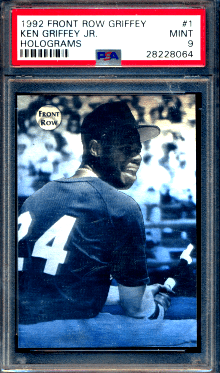 Ken Griffey Jr’s rookie cards are one of the best investments in the hobby, but today we’re looking at his 1992 Front Row holo insert.

The ‘Prototype’ version is easily identified, with a tag found in large text on the reverse.

The image of Griffey Jr. features him in an action shot, smiling at the camera with his bat visible in the background.

The holo gives the card a nice rainbow finish when looked at in the light, and it’s tough to locate in mint condition. 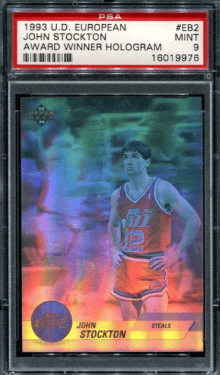 John Stockton led the Jazz to the franchise’s only two NBA Finals appearances in a storied career, although they fell at the final hurdle both times.

The player is included in two UD Award Winner holograms from ‘93, with the inserts given a crisp rainbow finish.

The image is also different for each one, to reflect the award given. #EB2 was for steals, while #EB8 was earned for assists.

Chris Webber was selected by the Orlando Magic as the first pick of the 1993 NBA draft, going on to be named as the Rookie of the Year.

His hologram card from the 1996 Upper Deck set is by far the most advanced card we’ve seen so far, evidenced with a sleek silver design and a great action shot of Webber.

Graded copies aren’t especially valuable by any means, unless you look at mint versions and above. 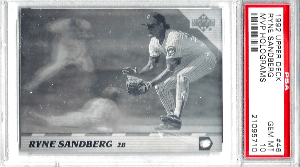 Switching back to baseball, Ryne “Ryno” Sandberg featured for the Philadelphia Phillies and Chicago Cubs in over 16 years spent as an MLB player.

Sandberg is one of the cards in a holo set focusing on the top offensive player and pitcher from each Major League team.

Considering he won nine consecutive Gold Gloves from 1983 to 1991, it’s no surprise that he earned a spot on the list. 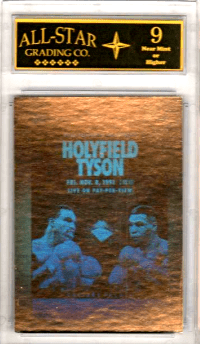 The ‘Heavyweight Holograms’ were produced by Kayo Cards in 1992 as a set of 10 featuring prominent heavyweights from the era.

Mike Tyson was originally set to fight Evander Holyfield in 1992, although Tyson pulled out due to a rib injury.

Tyson was convicted of rape and sentenced to six years in prison that year.

The gold card notes that ‘we may now have to wait very long for the fight that never was’, with Tyson losing in 1996, as well as the ‘97 rematch. 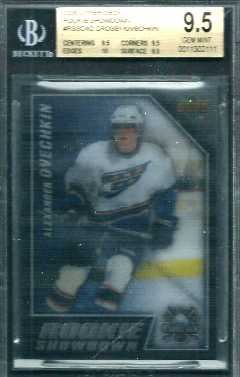 You’ll find a holo image of the latter on the front of the card, along with a small bio and images of each player found on the reverse.

RCs are always a great investment opportunity, and this is no exception. 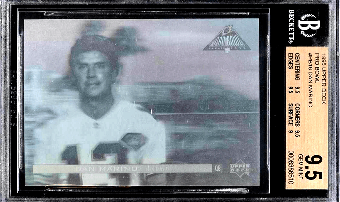 Heading back in time to 1995, Dan Marino is one of the more talented players never to earn a Super Bowl ring.

Included in the Pro Bowl holographic insert set is a landscape card with a great posed shot of the player as he smiles at the camera.

As with the majority of cards on this list, pristine copies will be hard to track down. 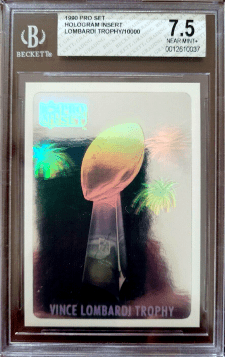 One of the key cards from the 1990 Pro Set focuses on the Vince Lombardi Trophy itself, which is awarded each year to the winning team of the National Football League’s championship game.

It’s another basic holo, which is fair enough considering it was released over 30 years ago. 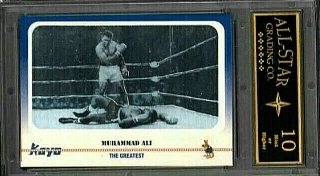 Boxing cards aren’t as popular as they could be, but it’s always worth making an exception for ‘The Greatest’.

The holo image is the iconic snap of Ali standing over the fallen Sonny Liston in Lewiston, Maine, May 1965.

The reverse is a lot like a traditional sports card, listing previous opponents, along with his record and a short blurb. 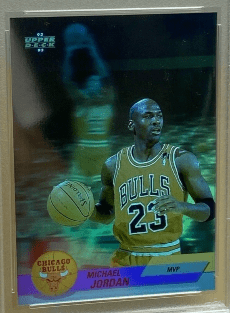 Michael Jordan is always a solid choice when looking at collectible cards, or anything with his brand attached.

The 1992 Upper Deck award holo notes he was the MVP, while Jordan is pictured in his famous Chicago Bulls jersey in a full-bleed image on the front of the card.

You’ll be able to see him dunking the ball if you take a look from a different angle. 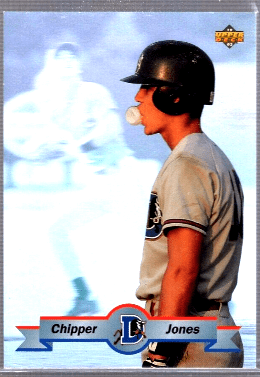 Former third baseman and current MLB analyst Chipper Jones is featured in a 1992 minor league set produced in the style of the Upper Deck Baseball flagship release of the same year.

The 1992 Upper Deck Minors has a collection of Top Prospect Holograms, with Jones the third on the list.

One of his earliest cards, it’s full-bleed on the front, while he’s chewing bubblegum in a memorable image. 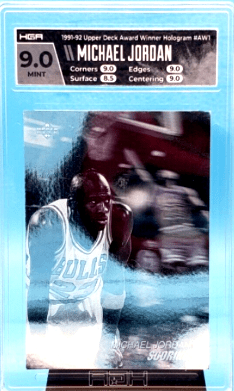 Another Jordan card, and another Award Winner hologram. This time we’re looking at #AW1, from the 1991 Upper Deck set.

MJ earned his spot on the AW list for scoring, averaging 33.6 points per game the previous season. 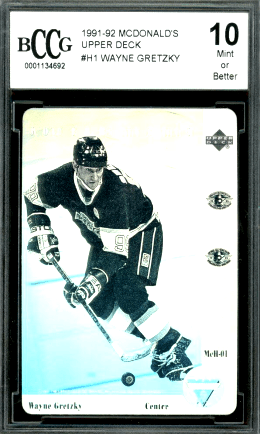 Wayne Gretzky is seen as a true GOAT and was a nine-time Art Ross Trophy winner by 1991, which is when this insert was originally produced.

The Upper Deck Czech release features a large shot of Gretzky’s face on one side, with the trophy found on the other.

Investing in Gretzky rookie cards is almost always a good idea, although the price begins to pick up significantly when looking at copies that have achieved a high grade from the likes of PSA. 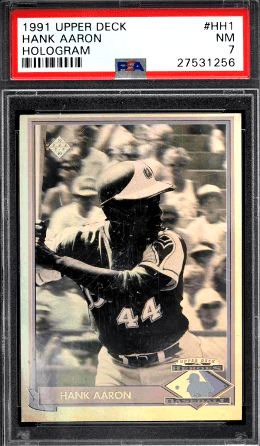 A familiar name to any baseball fan, Hank Aaron is a former right-fielder who is one of the most accomplished stars in the history of the sport.

The 1991 Upper Deck Hologram is an SP from the Upper Series, featuring a superb image of the player in a batting pose. 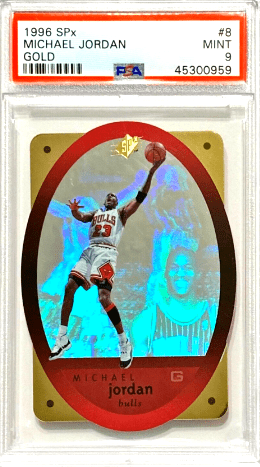 Michael Jordan is back for the third and final time, as part of 1995-96, Upper Deck SPx insert set.

A product of its era, it has a red and gold background that is die-cut. There’s a large red circle that contains multiple hologram images of Jordan, backed by four golden corners.

There’s also a tiny SPx logo found at the top of the circle, while the reverse has a more traditional design. 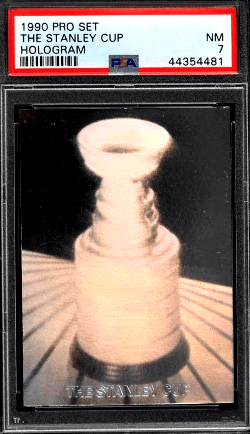 The 1990 Pro Set has enough space to fit The Stanley Cup, which is awarded annually to the National Hockey League playoff champion.

Another simple hologram, it’s one of the more valuable cards from the set in the present day.

This is mainly due to condition-related issues, a limited print run of 5,000, and the fact that it’s now over 30 years old. 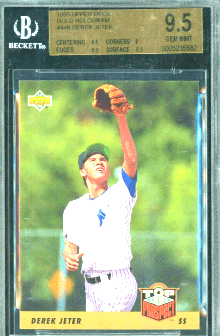 The Jeter Hologram Gold rookie card is by far the most pricey of the cards on the list but not necessarily the best looking. In fact, it is very average in our opinion but if you’re looking to purchase a hologram as an investment this is your best bet in terms of ROI. 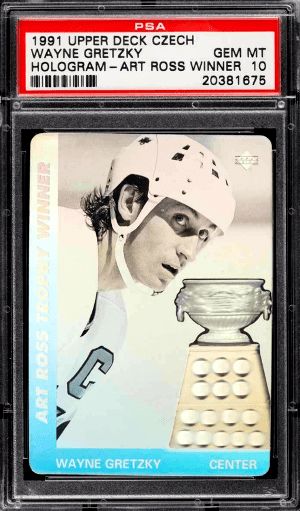 The top spot on the list is reserved for a Mcdonald’s hologram from the 1991-92 season.

Released as part of a massive promotion in Canada, six holograms joined the 25 hockey cards offered by the fast-food chain that year.

Wayne Gretzky is featured as the first holo, in a card that is far classier than you might have expected.

The action shot sees Gretzky on the ice, with a rink making up the background.

The most expensive hologram card by far is the 1993 Upper Deck Gold Hologram Derek Jeter rookie card #44 which recently sold for over $2,000 (via eBay auctions – May 2021).

They’re still fun collectibles, even if the majority aren’t especially valuable in the present day.

Investment Rating: N/A – these should not be looked at as an investment but a fun purchase to make.

The top hologram cards tend to be older and should have a Hall of Famer attached if you’re hoping for a decent ROI in the long run.

You can’t go wrong with the likes of Jordan or Gretzky. Plus with a little luck maybe in the future, they will gain more popularity/value.