An enforcer is someone who keeps the opponent honest through the sheer threat of force. Even as the NHL has promoted an offensive strategy, enforcers remain key cogs.

Some NHL enforcers have earned legendary status over decades of dues-paying. While others simply go about their business and make the league minimum while protecting the team’s best player.

Either way, these tuff guys or others may say goons are an intricate part of the game and often are an afterthought to the Sidney Crosby or Connor McDavid’s of the world.

These cards can vary in price and are not very popular, so they should be available at an affordable price, even at high grades. 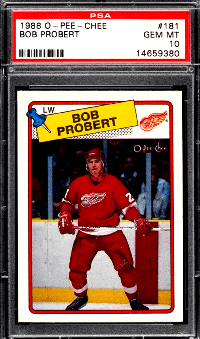 Bob Probert was a member of the vaunted “Bruise Brothers“, and he was very familiar with throwing down the gloves. He claims the top spot on this list with his 1988 O-Pee-Chee RC.

Seeing as it’s a card printed during the Junk Wax Era, you won’t have to break the bank. However, investors clearly see strong value as it’s in high demand.

The card shows Probert in a predatorial stance. He balances on the toes of his skates as he surveys the ice, like a bully monitoring the middle school hallway for a nerd to smash.

His Red Wings gear is striking, with the all-red pants and sweater striking the perfect tone for a bloodthirsty enforcer like Probert. He holds his stick at waist level as the crowd lurks behind the glass.

Must-Read: 10 Most Expensive Hockey Cards from the 1990s

A rounded red border outlines the image. The card’s upper section contains a yellow, rectangular “Bob Probert” nameplate. It is (traditionally) “pinned” to the card with a cartoon thumbtack.

A modest Red Wings wheel-and-wings logo sits to the right of the nameplate. When you’re looking for solid, 80s-era hockey cards, O-Pee-Chee is the sweet spot. 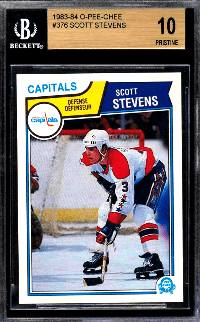 Scott Stevens spent more than two decades in the NHL, a testament to his enforcement (and playing) abilities.

The 1983 Scott Stevens O-Pee-Chee RC #376 commemorates the first year of that two-decade span.

It shows the defenseman, Stevens, with his back bent at 90 degrees, parallel with the ice. His left hand firmly grasps the lower end of the stick, which he has planted on the ice’s surface.

He wears an 80s-era Washington Capitals getup, replete with a blue, white, and orange color scheme and stars visible on his left sleeve.

Stevens’ visor-less facemask and the dingy appearance of the ice and net confirm that this was, in fact, the 1980s in the NHL.

Stevens’ longevity and the bankable O-Pee-Chee name give this enforcer’s rookie card staying power. It ranks in a price range similar to the Probert RC. 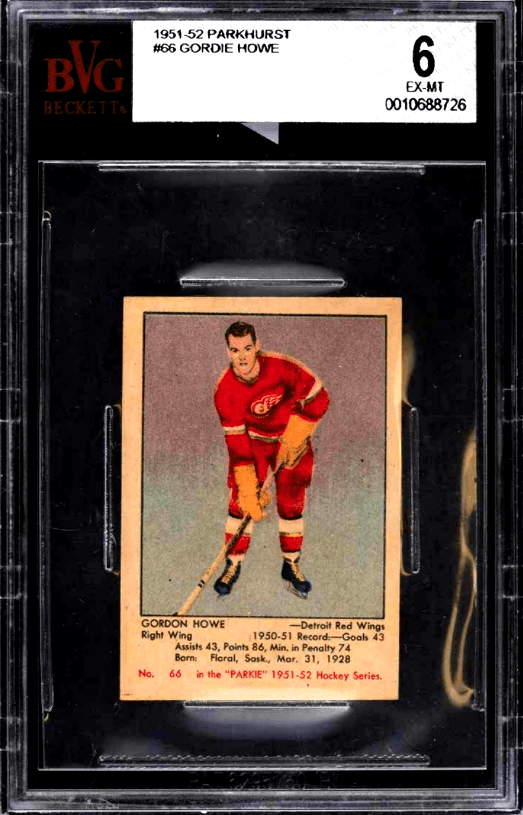 We’re going way back with this 1951 Gordie Howe Parkhurst RC #66, and you’ll have to dig way deep in your investment portfolio if you want this one.

A faint blue-grey background frames the helmet-less Howe, whose artists’ rendering touches his stick to the ground in black ice skates.

Below the image, this vaunted rookie card contains Howe’s statistics from the 1950-51 NHL season along with his name, birthplace, and position.

Even well-graded copies of the card show signs of age like discoloration. 1951 is darned near WWII era, and this card feels every year of its seven-plus decades.

Its price tag alone tells you that. 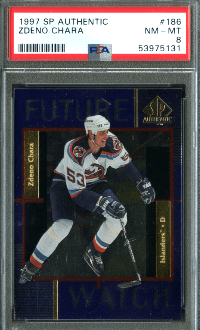 “Big Z” is not just a feared big man, but also a skilled big man. With two-plus decades of NHL hockey under his belt, his 1997 SP Authentic RC #186 continues to appreciate.

The card shows Chara as New York Islander. He contorts his gangly limbs into an athletic crouch, mouth open, and mouthguard exposed as he strains in the effort.

The card has graphics that feel completely at home in the late 1990s, with the “Future Watch” font and an array of multi-colored tiles being especially 90s chic.

A reflective backdrop behind Chara is a nice touch, while the combination of circular patterns and horizontal lines gives your eyes plenty to feast on.

Chara has been one of the premier defensemen in the NHL for a long, long time. You wouldn’t know it from this card’s market value, which makes it a steal. 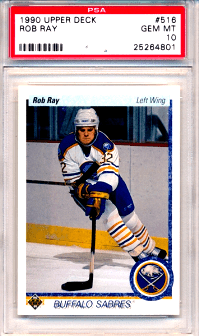 Though he might not have the name recognition of Gordie Howe, Rob Ray held his own on the ice as a Buffalo Sabre and Ottawa Senator.

The 1990 Rob Ray RC #516 from Upper Deck features a pug-faced Ray in the white, blue, and gold Sabres kit. He reaches out with both arms to control the puck.

Upper Deck had a fairly standard design blueprint in the 90s, and this fits the mold. A white backdrop and border host the Upper Deck logo and Buffalo Sabres template.

A raised, blue-white nameplate up top reads “Rob Ray Ailier gauche” (the French Canadian readers get what we mean).

You can get this one for the low-low (like real low), which means lots of room for potential growth. 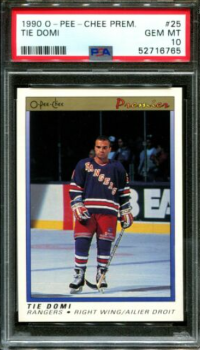 Tie Domi embodied the truism that “big things come in little packages“. The short-but-strong enforcer gets the spotlight as a Ranger on this 1990 O-Pee-Chee RC.

Domi stands under the lights at Madison Square Garden, the expression of a punch-drunk boxer plastered on his face. He wears the iconic blue Rangers sweater, the red, white, and blue color scheme bleeding all the way into his gloves.

O-Pee-Chee managed to avoid the horrendous card designs of the Junk Wax Era by keeping it simple. A gold nameplate atop contains the O-Pee-Chee Premier logo.

The white outer border includes black font reading “Tie Domi – Right Wing/Ailier Droit”. The image does the work, and that’s a good thing because this image is one of a fierce, solo warrior.

You can get this card in Mint condition at a very reasonable price. 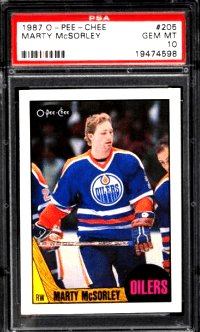 McSorley, helmet off, holds his stick across the pants portion of his blue-and-orange Edmonton Oilers jersey. He towers over the teammate to his left, strawberry blonde hair matching the orange trim of his sweater.

True to many cards of this era, design is limited. A yellow hockey stick graphic contains McSorley’s nameplate. A pink, bold-lettered “Oilers” graphic rests to the right of the nameplate.

This is another card that you can get for a very palatable price point. And if you don’t, McSorley might just drop gloves.

The best enforcers don’t have to be in your face. They present a latent threat that is often subtle, just like many of the cards on this list.

None of these cards is flashy, and each has a unique set of pros and cons. There’s an enforcer card here for every bracket of investors. Why not put your dukes up and add one (or more) of these to your collection of NHL gems?

After all, every team needs an enforcer.

Visit Our Shop at: