One of the most talked-about sports debates is determining which players were the best of all time.

Some lists are picked based on pure talent, stats, popularity, achievements, or even NFL records. This list consists of all-time greats players which includes current and former players. 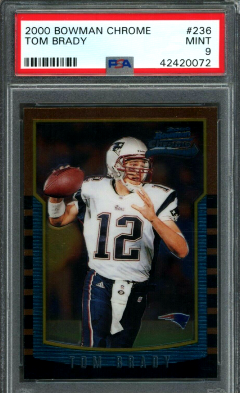 Tom Brady, at the age of 44, is still a top quarterback in the NFL. He has won seven Super Bowls in his career and is signed for two more years with the Tampa Bay Buccaneers.

Brady’s cards have broken many sales records within the last year. One of his most popular rookie cards is his 2000 Bowman Chrome. This card is considered Brady’s most popular base rookie card, especially since he was not featured in a Topps Chrome product until 2002.

High-grade examples have reached an all-time high in value during 2021. Brady’s Bowman Chrome rookie card should continue to trend up in value more especially if he can win another Super Bowl within the next two years.

Peyton Manning is easily regarded as one of the best quarterbacks ever to play in the NFL. He would single handily changed how the game was played by being able to read defenses and audible at the line of scrimmage pre-play.

One of Manning’s most popular rookie cards is his Topps Chrome from 1998. This card is still very obtainable for many collectors and buyers, especially in a graded PSA 9 example.

PSA 10 examples are nearly approaching $2,000 in value, so investing in a PSA 9 example is your best option.

Drew Brees just retired from football this past year. He has set many NFL records and was one of the most dominant at the quarterback position of all time.

This card will always be valued because it’s considered his PSA Future Hall of Fame Registry Rookie card.

Jerry Rice is regarded as the G.O.A.T. (Greatest of All-Time) regarding the wide receiver position. Rice ranks first all-time in receiving yards, touchdowns, and receptions.

The GOAT players trended up a ton in value within the last year as tons of collectors or buyers of sports cards were buying players similar to Rice heavily.

His most popular and best card is his 1986 Topps.

Adding a Jerry Rice Topps rookie to your collection is a must-have!

Ray Lewis was one of the most influential players in all of football during his time. Many of his teammates idolized how much passion he played with and loved his work ethic.

His most popular rookie card is Bowman’s Best rookie. This card is regarded as his Hall of Fame PSA Rookie Registry card. Lewis is considered one of the best defensive players in the history of the NFL.

Considering how famous of a player Lewis was, his card still has plenty of room to increase in value, especially in a PSA 10 example.

Reggie White ranks second on the all-time sacks list in NFL history. Before joining the NFL, White played one year in the USFL.

His most popular rookie card is his 1984 Topps USFL rookie; this card is considered his PSA Hall of Fame Rookie Registry card. This means that it’s regarded as his most famous collectible card.

A PSA 9 example can be bought for nearly $500 in value, and this is a great card to buy in high grade. Investing in this now could pay off in both the short and long term.

Favre was regarded as one of the most famous quarterbacks of his era. His most popular rookie card is his Topps Stadium Club rookie. The card spelled his name Farve and is considered an error rookie card for that reason. This card is also considered his PSA Hall of Fame Rookie Registry card. A PSA 9 example can be bought for around $70-90, and PSA 10s closer to $500

This is an excellent buy with a lot of upsides to trend up more in value.

His most popular rookie card is the 1986 Topps rookie. This card is still very obtainable and affordable for most collectors or buyers in a PSA 9 example. A PSA 9 ranges from $150-200, and considering Smith is the all-time leader in sacks, this seems like a great buy.

Smith, in my opinion, is one of the more underrated players in NFL history, and it does not appear his sack record will be broken any time soon.

Aaron Rodgers is often regarded as one of the best players to play quarterback. Rodgers won MVP last season and his cards trended up a ton in value all last year.

This card is considered one of his best and rare, with his SP Authentic Auto serial number out of 99. Examples with multi-color patches add a lot more value, and high-grade ones too.

Investing in a card like this could pay off hugely in the future, especially because this one will always be regarded as one of Rodgers’ best.

Fran Tarkenton was regarded as the best quarterback of his era playing from 1961-1978. He would retire at the time with several NFL records.

Tarkenton played most of his career with the Minnesota Vikings and spent some seasons with the New York Giants.

His most popular card is his 1962 Topps rookie card. This card is a must-have for any Vikings fan. This card is already becoming tougher to find, especially PSA-graded examples in all grades.