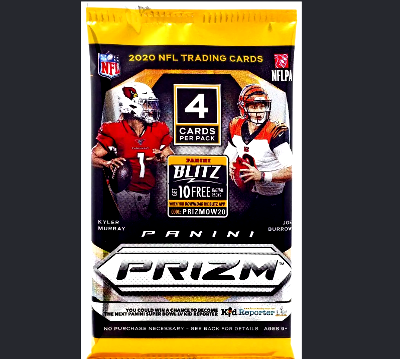 Each year the football card manufacturers unleash hundreds of expensive trading card packs on the general public who seemingly buy them up just as fast as Target employees can put them on the shelves.

Today buying a pack of football cards is more like playing the lotto, you’re looking for that big score that could equal a four, five, or even a six-figure payday.

Although not overly available by any means but the football card packs below should be found on eBay auctions at any given time. Go in with some friends and buy a few packs listed below. As you will see two packs were essentially tied for first.

You might pull a Tom Brady rookie card valued well into the five digits, or you might roll craps. Either way, you will have a great time.

We here at Gold Card Auctions feel that the 2020 NFL QB class may produce two of the top players at the position of all time.

Who are we talking about?

Yes sir, Mr. Justin Herbert and Joe Burrow could very well be the next Brady and Manning.

The 2020 Football Mosaic pack is our best football card pack.

But guess what? We also consider it the top option in all sports currently. 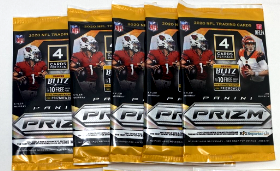 2020 Panini Prizm packs take the second spot on the list, thanks to the inclusion of a Justin Herbert RC which is one of the most popular collectibles on the market right now.

Of course, Herbert was eventually named as the Rookie of the Year, and his RCs are expected to provide a large ROI if you’re planning to hold in the long-term.

One of the more recent sets to make the list, packs are definitely worth keeping an eye on if you’re interested in the best football card packs.

If you have more money to spend considert a Prizm hobby box as you will get a great amount of cards (hopefully Herbert or Burrow RC) for your money.

Did someone say, Tom Brady, aka Captain America?

Don’t look, but his rookie card prices are steamrolling upwards again like an out-of-control locomotive.

These 2000 Bowman Chrome football packs, without a doubt, take our number one spot.

The pack could spit out the best sports card over the last five years in terms of ROI in the form of the 2000 Bowman Chrome Tom Brady rookie card.

Patrick Mahomes is the stand-out pick from the 2017 Panini Prizm, and the set contains one of his most popular RCs.

The QB’s Super Bowl exploits have caused prices to rise rapidly since the set was first released, while it’s worth noting that it’s a Silver Prizm, rather than a traditional silver parallel. Whatever the case, the Mahomes RC is a worthy addition to any investment portfolio and another with great future potential.

Heading back to 2012, Russell Wilson is a prime hit found in the flagship Prizm football set. The quarterback was named the Walter Payton NFL Man of the Year in 2020 and looks to be a cert for the Hall of Fame when he retires.

Perhaps only matched by signed RCs from the same year, his base card is available in a range of Prizm parallels which significantly up the ante. Peyton Manning is another solid card to potentially pack, along with Brady and Drew Brees.

Aaron Rodgers won the Associated Press Most Valuable Player award for the 2020 season, with 44 votes out of 48. The Green Bay Packers quarterback is still going strong despite being included in the rookie class of 2005, although retirement may be on the horizon in the next season or two.

We expect a bump in prices for his 2005 Topps Chrome Refractor once he decides to end his playing career, and he’s another star who is destined to become a Hall of Famer.

Once again, Tom Brady is a potential hit for anyone brave enough to rip open a pack today.

Another Mahomes rookie card which is the key to the set is found in 2017 Panini Donruss Optic Football. It’s a ‘Rated Rookie’, with a great image of 2 PM as he prepares to release the pigskin. There’s a range of parallels, and it’s not to be confused with the Donruss Optic card (#327) which shares the same image.

As we’ve mentioned, we think Mahomes RCs are one of the better investment opportunities in the hobby overall when factoring in potential ROI.

A superior football pack if you’re looking for just, not a big hit but lots of them. The 1986 Topps Football Card Pack spits out the coveted Jerry Rice rookie card and the Steve Young rookie card. Wait there is more. The pack also has the chance of spitting out Dan Marion, Bernie Kosar, and Walter Payton’s football cards.

Although none of the three above are rookies they still pack a good bunch when it comes to value. Side Note: Is it just us or is the Steve Young rookie card one of the most undervalued cards in the hobby? He was the third-best QB these eyes have personally seen (behind Kurt Warner and Tom Brady).

Sticking with Brady, he’s always going to be the most important player from any set released during the turn of the century. Every one of his RCs is especially valuable, including this entry-level product which originally retailed for just 99c per pack.

Only one Victory Rookie is included per pack, so there’s no guarantee that he’ll be included. It is one of the cheaper Brady cards, but it’s still an RC featuring the GOAT.

Aside from Kyler Murray’s Rookie Ticket, we think his 2019 Panini Select RC is the option to own. The card shows Kyler tossing the football to an RB on the backfield. His autograph is placed bottom/center with his name printed just above the auto.

Justin Herbert and Joe Burrow are two further hits, along with players like Tom Brady and Patrick Mahomes which have to be seen as great future investment pieces.

The combination of Joe Burrow and Justin Herbert is enough to make 2020 Mosaic Football packs some of the best in the business for football card collectors. This is especially true if you’re on the market for rookie cards featuring some of the biggest talents in the sport today.

Of the two, we’d hope to see Burrow rather than Herbert, but either is a major Win. 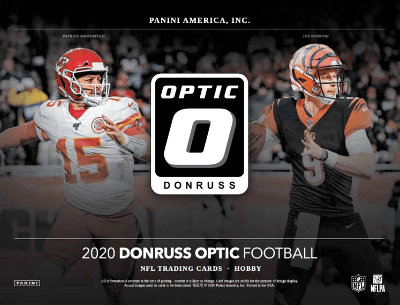