Each year, sports card manufacturers release hundreds of unique sets. Of those sets, a few stand out from the competition.

Whether because of high-priced individual cards, strong overall value, a great variety of parallels and inserts, or other reasons, we’ve identified the 10 best football card sets and packs to buy in 2021.

Every collector has unique tastes and budgets, but the market has spoken. These are some of the most coveted packs and boxes from the 2021 football card release calendar.

2021 Panini Prizms are always in high demand, and the White Sparkle parallel can command lofty prices when conditions are right.

The White Sparkle parallel gives each card a holographic sheen similar to pointillism art. The effect, as you might guess, is a white sparkle.

Even White Sparkle Auto RCs for players with unclear NFL futures, like Feleipe Franks, have sold for four figures.

Non-autographed rookie cards can also make back the purchase price of a single pack, and then some, so long as you find the right rookie.

The 2021 Panini Chronicles Draft Picks football packs to include 8 cards per pack, 6 packs per box, and 16 boxes per case.

The design of the One Quad patch auto cards is especially noteworthy. The player patch lies beneath a four-paneled design. To the left of a patch is a player image, with the player’s collegiate team colors in the background.

Even though the base set design is considerably less exciting than the top-tier parallels, you’re guaranteed to receive rookie cards when you open a pack of 2021 Panini Chronicles Draft Picks—this alone is appealing.

The chance that you will hit on a coveted auto or patch auto only adds to the allure of this specific pack. 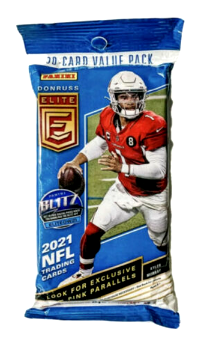 Panini is, based on our list, the most in-demand name in collecting right now. The 2021 Panini Mosaic Draft Picks packs entered the marketplace as an online-only release.

The first set of its kind, the Mosaic Draft Picks line expanded Panini’s stable of Draft Pick-centric offerings. You get 15 cards per pack and two packs per box.

Buyers expect to receive two autographs and eight parallels per box (one autograph and four parallels per pack, for you Liberal Arts majors). Of the parallels, two are generally Silver parallels while the remaining six are Mosaic parallels.

The Mosiac Autos and Scripts cards both contain Gold and Black parallels, numbered to 10 and 1, respectively. Collectors hope to obtain a Black Mosaic Auto or Scripts auto with a name like Ja’Marr Chase, Trevor Lawrance, Devonta Smith, or Zach Wilson on it.

Even Black and Gold parallels without autographs have commanded strong prices. The Mosaic design, with radiant, kaleidoscopic color schemes and quality player images, likely has something to do with strong demand.

The opportunity to break into a rare rookie auto or a nice-looking numbered parallel with one rip of the foil makes this set too good to exclude.

In the style of other premium products, each Panini Black Football box contains only five cards. Each box averages two autographs and one relic card, including one rookie patch auto.

Variety is a defining feature of this set. Capstone, Spotlight Signatures, Smoke Show Signatures, Jet Black Materials, Futuristic, and Rookie Influx are all unique card iterations that you may pull from this set.

Rookie patch autographs remain the gold standard of this set (and most others). In particular, 2021 Panini Black Football RPAs featuring Mac Jones have fetched impressive prices.

Each insert and subset within this release has something to offer. We included it, though, because of the potential for you to pull a rookie patch autograph, a rare Jet Black materials parallel featuring a superstar NFL veteran, and other similarly rare and valuable cards.

The Freshman Fabric Mirror Signatures are one of this set’s greatest assets. The Black and Black Etch parallels are 1 of 1s, while the Green, Purple, and Gold (including Etch) parallels are limited to 5, 10, and 25, respectively.

The Gold Team Mirror Signatures Black Etch cards are each numbered to 1 and include some of the collectors’ best friends like Tom Brady, Justin Herbert, and Kyler Murray.

The potential of finding a coveted rookie patch auto or limited-run superstar autograph makes this a pack worth gambling on. 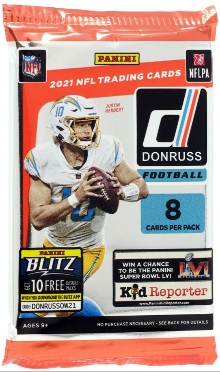 On average, each box contains an autograph, a relic card, 18 rookie cards, 12 parallels, and 42 inserts.

The base set has a simple, classic Donruss look. Captivating player images are surrounded by two-tone, team-colored borders in a pinched rectangular shape.

The base cards alone are reason to consider this set, but they are not the pull factor that most collectors seek.

This set offers a massive spectrum of variety. This is a positive in one sense, as there are many unique parallels, subsets, and rookie cards that you could pull. On the other hand, a massive checklist presents some risks.

Still, 2021 Donruss Football packs offer unrivaled excitement in that you could unveil any number of exciting autographs, patches, and rookie parallels.

This set deserves a spot on this list because it’s a comparatively affordable option. Hobbyists may stumble upon a high-value rookie autograph with minimal upfront investment. 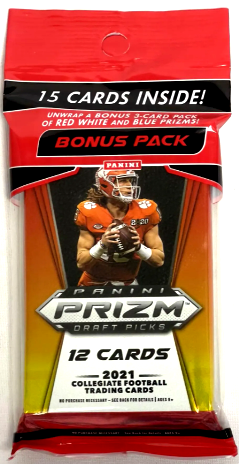 If you don’t already know, “cello” packs refer to the transparent cellophane wrapping that encases each bundle of cards. These packs generally contain more cards than a standard pack.

As previously discussed, you’re looking for autographs and rare parallels when you’re opening a pack of Panini Prizm Draft Picks, including a cello pack.

The Draft Picks Autographs to include rare parallels such as White Sparkle (/1) (and previously discussed as its own pack), Black (/1), Black Gold (/5), and Neon Green Circles (/10).

The sheer variety of autographed parallels makes the 2021 Panini Prizm Draft Picks cello pack an exciting one to open. Many of the parallels feature an array of fractured, stained glass-style color schemes.

Finding any rare autographed parallel, or a valuable insert like the Justin Fields Colorblast, could be a W for those who purchase a Prizm Draft Picks cello pack.

2021 Panini Prestige Football was initially available only through Panini Direct shops. The set was released in a Hybrid Box format with 10 cards per pack, 10 packs per box, and 20 boxes per case.

A box averages 20 rookie cards, 10 numbered parallels, 10 Galaxy parallels, and 20 inserts. The variety of rookie cards and valuable parallels and inserts makes this a set worth acquiring.

Draft Day Signatures and NFL Passport Signatures featuring even mid-tier first-round rookies like Jaylen Waddle, Mac Jones, and Kadarius Toney (among others) may be a welcomed sight for those who open a 2021 Panini Prestige pack.

Many of the most intriguing parallels in this set feature unique designs, from comic book-style lettering to state flags denoting players’ colleges.

Tom Brady autographs are crown jewels within the 2021 Panini Prestige Football set. Whether it is a Heroes Xtra Point Autograph or Base Xtra Point Signature Premium Red, the TB12 auto cards have realized significant sales prices.

Finding a TB12 autograph in the form of a rare parallel is one of the greatest outcomes that a breaker can hope for. There is plenty of upside in this set, which is why we included it on this list.

The 2021 Panini Prizm Draft picks set comes in packs of 8 cards. There are five packs per box and 16 boxes in a case.

Trending: Best Sports Cards to Invest in 2021 and Beyond

You can see the previous description of the Panini Prizm cello pack for more details, but you’re looking for rare parallel autographs of Trevor Lawrence and other first-round rookies when you buy a pack o Prizm Draft Picks.

The Panini Prizm brand named combined with massive returns for rookie autos from this set make it one of the most valuable football packs in this year’s class of releases.

What are the best football card packs to get?

The best football card packs to get year in year out are Panini Prizm football cards and in particular the Prizm rookie cards (base or parrelles).

What brand of football cards are worth the most?

What are the best football cards to invest in? 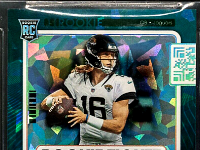