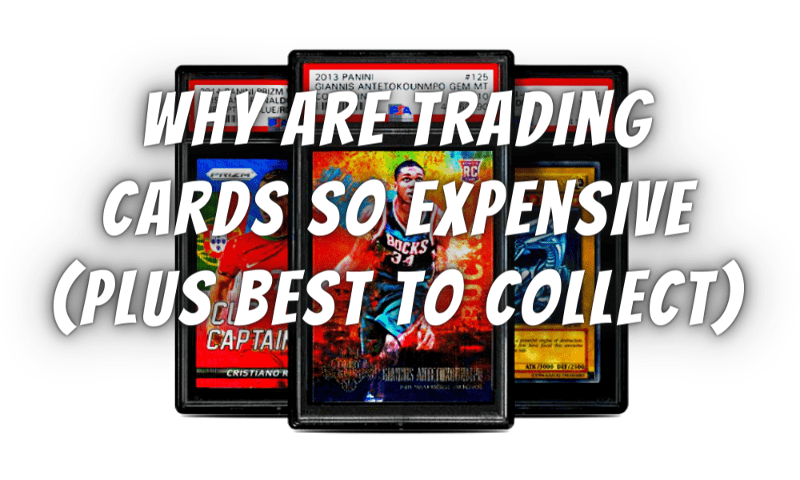 There’s no denying that the trading card hobby is becoming an expensive endeavor for the average collector.

Boxes and packs cost far more than they used to, while supply clearly exceeds demand for many sets.

Why are trading cards so expensive, and what should you look for when picking out potential cards to add to your collection?

Here’s everything you need to know about the current state of the trading card market, as well as some of the best cards to collect as of 2021.

Why Are Trading Cards so Expensive?

The truth is, the rarest trading cards used to be relatively affordable, even up to a decade or so ago. This was typically due to large print runs, with thousands of copies of the average card available until the 1990s.

The junk wax era is a testament to those times, with many cards from the mid-1990s essentially worthless unless they’ve been wrapped in a grading slab.

The rise in popularity of grading services has helped to create an element of separation between copies of the same card, which is why the most expensive versions will have been checked by the likes of PSA or BGS.

Then there are rare autos and serial-numbered parallels, which always fetched a tidy sum on the resale market.

As for current values, many investors see trading cards as a safe bet, especially given the growth seen over the past two decades. Trading cards are real-world assets, while they’re less volatile than the likes of crypto.

Lockdown saw a rise in attention paid to the hobby itself, as casual collectors took up a new pastime while they were stuck indoors. Many of these new fans have stuck with card collecting, ensuring that supply always exceeds demand.

Essentially, the best trading cards are a rare asset that can be trusted to hold, (or even appreciate) in value.

The Best Trading Cards to Collect 2021

We’ve listed 10 of the best trading cards to collect in 2021, featuring a collection of different sports and hobbies.

Wayne Gretzky is seen as the NHL GOAT for good reason, as the only player to total over 200 points in one season, a feat he accomplished four times. His trading cards are insanely popular, and they have to be seen as one of the safer investments within the sport.

The player has long been retired, while he benefits from a plethora of records that are sure to stand the test of time.

His 1979-80 O-Pee-Chee (OPC) card is first up, featuring an action shot of Gretzky on the ice along with a light blue border.

His key rookie card; chipping along the border, print defects, and various other frequent flaws make it difficult to find in mint condition.

A real piece of vintage sporting history, the 1951 Bowman Mickey Mantle card is the player’s true RC. (Of course, it’s often disregarded when compared to the ‘52 Mantle, which is seen as the Holy Grail of the hobby.)

‘The Mick’ needs no real introduction, while the National Baseball Hall of Fame inducted Mantle to Cooperstown in 1974.

His RC easily earns a spot on this list of the best trading cards to collect, although it’s likely to be out of reach for the average fan due to pure value.

The sole Pokémon card to make the list, the original 1999 set contains a range of expensive hits wrapped in holographic foil.

Even the base cards hold decent value when looking at the first-ever Pokémon collection, but there are none that are more popular than Charizard.

It’s easy to see why when looking at the card itself, as the fire-type has a devastating attack, along with a massive 120 HP. (Well, it was a high amount before power creep began to set in with the series.)

Charizard was seen as the key to the setback in 1999, and many were stored away for safekeeping.

Regardless, there aren’t many First Edition Shadowless versions, and graded copies are worth their weight in gold.

Kevin Durant is widely seen as one of the greatest small forwards of all time, with a list of accomplishments as long as the player himself.

KD’s 2007 Topps Chrome Refractor is a real work of art, showing the rookie in a crisp action shot as he leaps for a three-pointer.

The foil border makes it difficult to locate at higher grades, and it’s sure to be a welcome addition to any collection.

Given his recent success, it’s clear that ‘Shotime’ cards are some of the most popular options available right now; arguably none more so than his 2018 Bowman Chrome RC.

As well as base Refractors numbered to 499, you’ll also find the following colored parallels:

The power of the Bowman brand coupled with an on-card auto ensures that this is another RC worth paying attention to.

Baker Mayfield is a talented QB who is probably best-known for bursting into the scene in 2018 as he finished the season with 3,725 passing yards and surpassed Peyton Manning and Russell Wilson for most touchdowns thrown in a rookie season with 27.

We’re looking at his Contenders Rookie Ticket for the purposes of this list, which follows a traditional design seen with most cards from the collection.

Along with the on-card auto, there’s a range of rare parallels which are listed below.

Most recently, Mayfield has been dealing with shoulder, foot, and knee injuries which have left him struggling to find his form.

It could be the perfect opportunity to check out one of his best rookie cards.

Another GOAT contender, LeBron James has been named an All-Star 17 times, including three All-Star MVP selections.

If you can forgive LeBron for Space Jam: A New Legacy, his 2003 Topps Chrome Refractor is one of the better trading cards released during the mid-2000s.

There are serial-numbered Black and Gold versions, along with an X-Fractor limited to 220.

He also scored “the Golden Goal,” which is one of the most significant feats in Canadian hockey history.

His 2005 RC is found in the popular Young Guns subset, which features the player as he glides along the ice in a strong action shot.

Crosby’s contract runs through the 2024-25 season, so now could be the perfect time to pick one up before he decides to hang up his skates for good.

One to look to for the future, Luka Doncic was already a star way before he was elected unanimously to the NBA All-Rookie First Team, as well as being named Rookie of the Year for the 2018–19 season.

Doncic’s Immaculate RC is arguably his most important early release, featuring the eye-catching combination of a patch and an on-card auto.

Parallels include his Jersey Number and a range of colored options, and it’s hard to think of many more valuable trading cards within the hobby.

The top spot on this list of the best cards to collect is reserved solely for Mike Trout.

He’s a nine-time MLB All-Star, three-time American League MVP, and is an eight-time winner of the Silver Slugger Award.

This made Trout’s 2009 Bowman Chrome one-of-one Superfractor RC the most expensive sports card in the hobby at the time of the sale.

The Best Cards to Collect in 2021: Summary

The best cards to collect in 2021 all have something in common.

They probably feature an iconic figure, whether it be a fictional monster like Charizard or the likes of Mickey Mantle.

They’re also rare, coveted, or a solid mixture of the two.

A number of cards feature active players rather than tried and tested Hall of Famers.

This is because they tend to be cheaper, while there’s more potential for profit in the long run if you’re holding onto a GOAT RC for a player that’s still performing in the present.

Consider the Trout card that took the top spot on our list. The Superfractor sold for $3.93 million, but the buyer will undoubtedly be hoping that it’ll go for much more.

(Most players see a bump in price after retirement due to nostalgia, with a further price rise seen when they enter their respective Hall of Fame.)

At the very least, we’d advise keeping tabs on prices, especially if you’re aiming to buy a card for investment purposes.