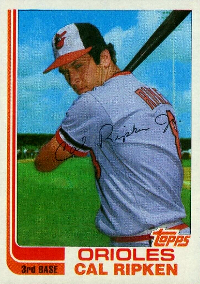 Cal Ripken Jr. is a legend of the game of baseball after spending his whole 2-decade-long career with the Baltimore Orioles. He predominantly played shortstop but on occasion also turned put as a third baseman and might be one of the most excellent second-round picks of all time. Ripken Jr. was named American League MVP twice, winning two Gold Glove Awards, 7 Silver Slugger Awards, and being selected to play in 19 All-Star games.

He also won the World Series with the Orioles in 1983 and holds the record for most consecutive games started in MLB history with 2,632.

Despite making his Orioles debut in 1981, Ripken Jr.’s true rookie season was 1983, which was his first full year in the league. The Orioles and Rip never looked back, as he hit 28 home runs and was given the prestigious American League Rookie of the Year Award. 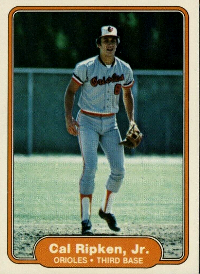 A straightforward but effective-looking card, reminiscent of its time. It features Ripken Jr. on the front in full Orioles uniform, taking up most of the card, with a think orange border and white outer edge.

There were a lot of these cards made, and PSA has graded more than 10,000 of them, but finding them in gem mint 10 condition is a different matter, with less than 300 achieving top marks. This results in a valuation well above $1,000 for top cards, but anything in lesser condition is affordable for all collectors.

This card features a classic ‘80s Topps design with Ripken in the center, a bat swung over the shoulder, and orange detailing around the outside with the Topps branding on the bottom.

There is also a printed autograph overlapping his torso. This is the most sought-after rookie card and does not grade well, resulting in a valuation of above $3,000. The high print run means they are much cheaper in the worst condition, but be prepared to pay triple figures if you want anything half decent. 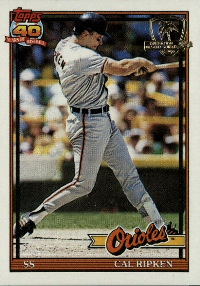 A very similar design to the other two cards on this list, but this time featuring a headshot of Ripken Jr. with the bat slung across his shoulder. A thin blue border surrounds the picture, and the player details are featured inside a sketched baseball bat and ball.

It is the least expensive of the trio but will still cost you well into triple figures if you want it in-game mint 10 conditions. Anything below mint can usually be picked up relatively cheaply. 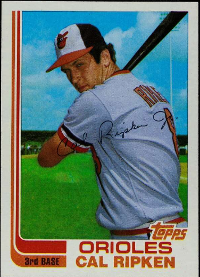 Ripken Jr. takes pride in the middle of this ‘Future Stars’ card, flanked by Bob Bonner (shortstop) and Jeff Schenider (a pitcher).

They were all Orioles rookies then, but only Ripken managed to carve out a successful career in the sport. The reverse has a list of basic stats, while a PSA 10 grade recently sold for $795 after attracting 42 bids.

Out of all the combo cards in the baseball card hobby, this has got to be one of the better ones. The Iron Man and Captain Cluth are on the same card! Whoa! This card will not be up often on eBay auctions, but we suggest making a winning bid.

The 1992 Donruss Elite is an autographed card with a limited run of 5000. Nearly three decades on, finding a perfect copy is challenging because of the metallic foil border, which scuffs far too quickly.

A PSA 9 recently sold for $301, while a rare gem version will sell for thousands. (So much for the junk wax era!) There are two versions, with one missing a signature on the front and the numerator in the serial number.

“Cal Ripken, the tallest player ever to play shortstop regularly in the major leagues, may stand tallest of all Orioles as he breaks record after record. And, in the mid-’90s, he should break Lou Gehrig’s record of playing in 2,130 consecutive games. He is the second player featured in the Donruss Signature Series, personally signing 5,000 of these specially numbered cards during the off-season. Dick Perez, the official artist for Donruss and the National Baseball Hall of Fame, created this card using a two-dimensioned hologram and metallic foil.”

Numbered 235, Ripken’s 1994 Topps Finest is a popular option released midway through his career. It has a robust design, although no signature can be found. There is a refractor version with a gem mint grade recently selling for $300. The reverse lists his ‘Finest Moment’; “July 15, 1993: His 278th HR as a shortstop surpassed Ernie Banks to set ML record for the position”. 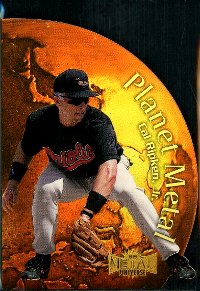 A great-looking card in both design and the photo of Ripken Jr.

Why should you buy Cal Ripken Jr. Cards?

Ripken Jr. is one of the most beloved players of all time, which remains the case after his retirement. He is seen as a pioneer of the game, paving the way for many of the sport’s great power-hitting shortstops, and this all bodes well for his rookie trading cards.

Despite long being retired and his induction into the Hall of Fame achieved over a decade ago, his card value remains strong and still consistently grows, and there is no reason why that would change now.

Where can I find a list of all Cal Ripken Jr Baseball Cards?