Boxing cards are making a comeback. You have to ask yourself this: do you want to be a part of the boxing card resurgence?

We’ve highlighted some boxing cards you’ll want to target if you do. Price points vary, and there is a card for sports card investors of all budget sizes.

Note that these are not necessarily the rarest, most heralded, or oldest boxing cards on the market. They’re those that we believe could offer a strong return on your investment. 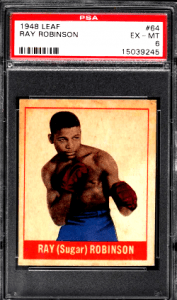 Viewed among the best fighters in boxing history, this is an aged relic of a bygone boxing era. Robinson’s loose-looking boxing gloves are an anachronism in 2021.

Must-Read: How to Invest in Sports Cards – 22 Tips to Maximize Your Profits

Due to its age, many copies of this card show signs of wear, from a yellowish fading to damaged corners.

PSA recognizes a few NM-MT 8 copies of the card, which are the ones serious investors will want to get their hands on. 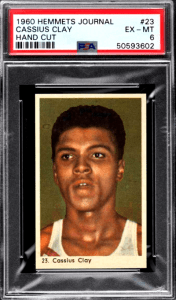 This card came out 7 years before Cassius Clay changed his name to Muhammad Ali. It’s the premier rookie card of the man widely considered to be the GOAT.

The 1960 Helmets Journal set is more trading card-esque than a true trading card, at least in terms of appearance. Its size is smaller than the typical trading card.

Clay’s card features an alert young Ali, pictured from the breast-up in a white tank top. An Army-green background resides within a thin, white border.

The image of Clay has a sheen reminiscent of a portrait. It’s a card that fits its era, with the color of the early 1960s and a spartan design that would befit a 1950s boxing card.

A Detroit legend, Joe Louis held the heavyweight title for nearly 12 years straight between 1937 and 1949.

It features Louis in a boxing girdle. He’s hunched over in the boxer photograph pose of the day. His ultra-compact gloves are a reminder of when men were truly men.

The card has absolutely no flair—no color, no logos, just a black-and-white image of Louis, a white border, and a low-key nameplate.

This is a card for boxing purists who want a timeless relic featuring one of the legendary pugilists. PSA doesn’t recognize any copies graded higher than 9, and the price of this card is definitely condition-dependent.

The card features a (shockingly) young Pacquiao, with his hands of stone raised in a boxer’s trademark stance. The prominent knuckles tell you that this man is a fighter.

Well, his rookie card is definitely worth adding to your collection. As one of the modern boxing greats, the 1999 Manny Pacquiao World Boxing Magazine RC #143 is a gem.

The card appears, for lack of a better word, a bit bootleg. Make no mistake: this is part of its appeal. The font, Asian lettering, and borders might look like something you could make in Microsoft Paint, but it is nonetheless a legitimate Pacquiao rookie card.

You may be able to obtain a mint copy of this card at a reasonable price point, as there are more PSA 10 copies of this RC than other cards on this list.

Who doesn’t want a (financial) slice of Iron Mike. If you’re going to add a Tyson rookie card to your collection, this is the one to target.

This is one of the most valuable boxing cards of any era. You can thank Tyson’s ferocity and cultural impact for that. Even today, Tyson remains a relevant American character—and a relevant investment.

The 1986 Mike Tyson Panini Supersport Italian RC #153 shows the dynamo shortly after he debuted as a pro. He was easily knocking opponents out, but this card has a certain innocence to it.

Tyson talks into an orange mic, sporting a mischievous grin and gapped teeth. His traps protrude beneath glistening sweat beads.

The card design includes a slanted frame around Tyson’s picture, an American flag emblem, “USA” and “Mike Tyson” font, and a cartoon boxer logo that all run parallel to the slanted frame.

This card has seen a precipitous rise in value and is sure to be an in-demand asset for the foreseeable future.

Julio Cesar Chavez remains an inspiration to Mexican boxers like Canelo Alvarez, and this is perhaps Chavez’s most iconic card.

Who doesn’t want to own a card called a Players International? It’s just so…player!

It is one of the more price accessible cards on this list, as there are 20+ copies with a PSA grade of 10.

The card’s look is retro regal. It features a prominent crown emblem in the bottom-right corner. Red, white, and blue borders intersect with both a golden nameplate and gold “Ringlords” logo.

An image of a sculpted Chavez fighting in his prime, wearing red gloves and matching red trunks, suits the card design perfectly.

Few boxers have sculpted the modern era of boxing (for better or worse) more than Floyd Mayweather, Jr.

When a boxer becomes so dominant that they resort to bouts with UFC fighters and YouTubers, you know you’ve found a guy worth investing in.

The 1997 Floyd Mayweather, Jr. Brown’s Boxing RC #51 is a must-have Mayweather card. Brown’s is a non-mainstream card company, and the card’s design is equally out-there.

The design is endearing in its crudeness, with a feeling that this could be the product of a middle schooler’s modern history project. From the boxing glove logo to the gold-yellow background and red illumination around the photo, this card is wonky.

This card’s novelty is attracting investors. Especially as younger collectors embrace boxing cards, Mayweather is a name you’ll want to have a stake in.

“Marvelous” Marvin Hagler had a sublime career during an era flooded with boxing talent. The Boxing Hall of Famer defended his middleweight title 12 times and only lost 3 bouts.

You can never go wrong when you invest in excellence. That would be your strategy if you purchase the 1982 Marvin Hagler Panini Sport Superstars RC #68.

A bald-headed Hagler stares (menacingly, depending on your perspective) at something outside the camera’s focus. The card also contains a nameplate, American flag icon, and cartoon boxer emblem.

Panini has produced several notable boxing cards (including the aforementioned Tyson RC), and this is one of them.

Hagler passed away in 2021 at the age of 66. Expect the value of this legendary fighter’s cards to increase posthumously.

You won’t find a more unique boxing card than this. Muhammad Ali is depicted floating (with butterfly wings attached to his shoes) and his hands are reimagined as bee’s stingers.

If you don’t get the reference, I can’t help you.

You won’t find a more unique boxing card than the 1979 Muhammad Ali Venorlandus Ltd. Our Heroes World of Sport #3. The card also happens to be one of our personal favorites of all cards in the hobby

The 1979 Venorlandus Ltd., Our Heroes of World Sport, featured international sporting icons in various athletic fields. The cartoonish portrayals are part of the charm.

You can get this card at very reasonable price points, particularly when compared with other notable Ali boxing cards.

You can check out Showtime Boxing TOPPS NOW Archive at www.topps.com/archive.

We care about what you, the fans and collectors, care about. We’ve therefore presented cards of boxers that the public loves at price points (with a couple of exceptions) that are reasonable.