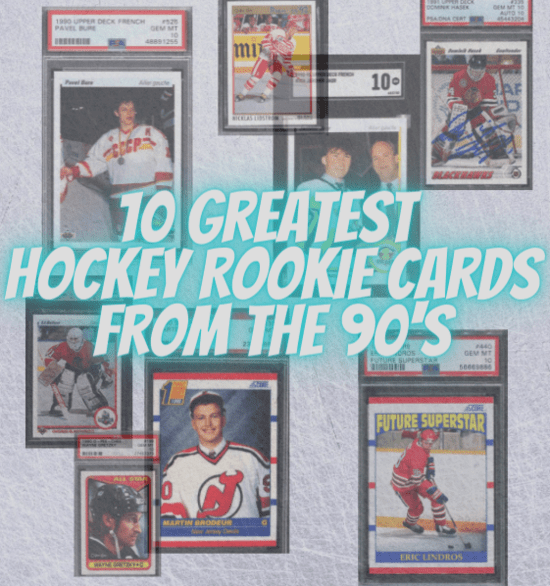 Here’s everything you could need to know about seven of the best ‘90s hockey rookie cards, including many icons from the sport.

The 1990s was a strange decade for hockey cards. There was the 1994–95 lockout, which nearly saw the season canceled. Then there was the Dead Puck Era, in which the NHL entered a prolonged period of offensive decline. Despite the issues mentioned above, several iconic RCs made it through the decade unscathed.

We’ve looked at collectors’ values, rarity, and overall interest when coming up with this list containing several 1990’s hockey RCs.

We love the 1990/1991 Upper Deck French rookie and Score Canadian hockey cards. Without further ado, let’s look at the top-rated hockey cards (rookie cards) from the legendary era in hockey, the 1990s. 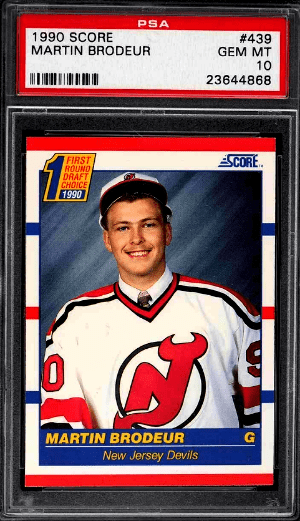 Where better to begin than in 1990, when the junk wax era was still in full swing? Most of the cards that make up the massive 1990 Score set are worthless, but Martin Brodeur’s RC is one of the few exceptions.

A true legend between the sticks, the 1990 Score focuses on Brodeur being chosen as a first-round draft pick by the Devils.

Rookie cards tend to be more valuable than the norm, while a combination of mediocre card stock and the red border at the top makes it difficult to find a copy of Brodeur’s 1990 Score that is still in good condition almost 20 years on. The values of PSA 10s have held steady in recent years, making it a decent investment piece. 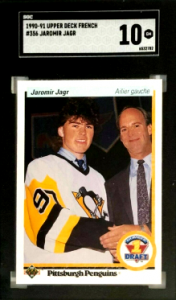 Jaromír Jágr is next up. Another legend of the sport, Jagr, played a mind-blowing 24 years in the NHL, amassing a total of 1921 points. He was drafted by the Penguins, sticking with the franchise for 11 seasons with 439 goals and 640 assists.

O-Pee-Chee is Topps’ Canadian counterpart and is often preferred when looking at older hockey cards. Many OPC cards (including this one) are bilingual, sharing French and English texts. It’s our pick, and it’s reasonably valuable when looking at higher grades. 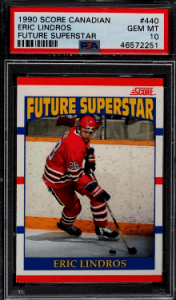 He was, is, and always will be “Legion of Doom.” 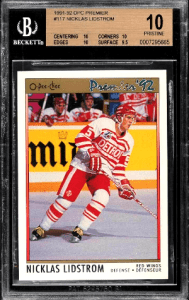 Nicklas Lidstrom played 20 seasons in the NHL for the Detroit Red Wings and is seen as one of the greatest defencemen in history. His OPC card was always going to make the list!

Once again, it’s from the O-Pee-Chee Premier Hockey release, as one of a number of new premium brands in the hobby. The cards are printed on bright stock, and the images are always interesting.

Lidstrom’s RC is found in 1991 sets, which focus on the player with a range of great action shots. Lidstrom is pictured on the ice as his teammates look on in the background, and the card has a crisp red and gold border that matches his Red Wings uniform. This card is also bilingual, evidenced by the ‘Defense/Defenseur’ tag at the bottom. 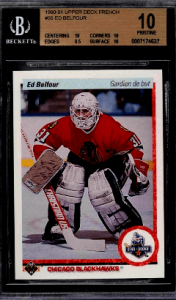 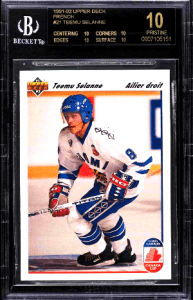 The next player to make the list is Teemu Selanne. Known as ‘The Finnish Flash’, he played for the Winnipeg Jets, Anaheim Ducks, San Jose Sharks, and the Colorado Avalanche. He still holds the NHL record for the most goals and points by a rookie in 92/93.

Instead of the base 1991 Upper Deck card, we’d look to the French version. (It earns the ‘French’ moniker as it lists his position as; “Ailier droit”, which translates to “Right Wing.”)

The player is featured in his Finland international kit while on the ice, participating in the Canada Cup tournament at the time. It’s another strong pick from the junk wax era, and the French version vastly exceeds the value of the typical US UD card. 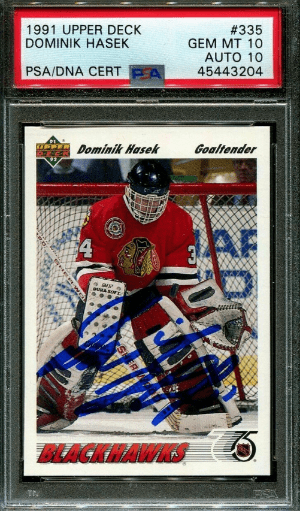 Dominik Hasek is one of the era’s top goaltenders, and this is one of his more popular RC options. The 1991-92 Upper Deck release was their second foray into the hobby, building on the previous year’s success with another robust set.

There are no parallels, but a French version has different text on the front and the reverse. You’ll be able to tell by checking out his position, which is listed as “Gardien debut.”

Hasek was up against a young rookie by the name of Martin Brodeur when his team faced the Devils in Game 6 of the Eastern Conference Quarterfinals of 1994. Brodeur made 49 saves, but Hasak got 70 in a performance widely seen as the best ever by a goaltender.

The card features a large action shot of Hasek defending his goal as well as an Upper Deck logo in the top left corner and a Blackhawks logo at the bottom. It’s a good photo, while it’s worth mentioning that he was named to the All-Rookie team in the same year, adding additional value. 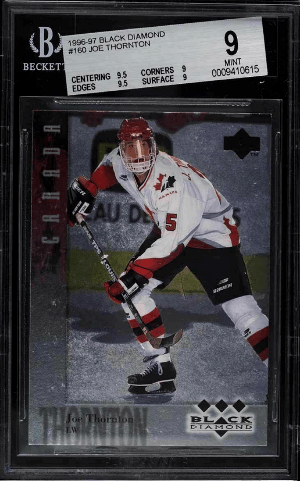 The San Jose Sharks’ all-time leader in assists, who made his debut in 1997, Joe Thornton, is still going strong as of 2021. Having won the Hart Trophy and the Art Ross Trophy in 2005-06, he’s the only player in history to win the awards in a season in which he switched teams midway. He’s a lock for the Hall of Fame.

His ‘96 Black Diamond RC is one of only three options, and it’s the rarest by far. It’s one of 30 Triple Diamond short prints combined to land in just 1:30 packs. Thornton is found in a great action shot in his Team Canada uniform, while the lack of a hard border makes it difficult to find higher grades as of 2021. 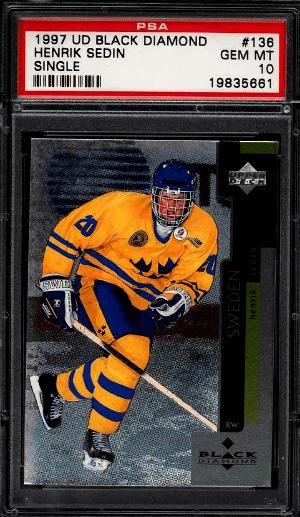 Henrik Sedin spent his entire NHL career with the Vancouver Canucks, retiring in 2018 as their all-time leading points scorer. He won the Hart Memorial Trophy and the Art Ross Trophy in 2009-10 and helped the team to the Stanley Cup finals a year later.

Sedin’s 1997 Black Diamond RC has some similarities to the ‘96 card seen above, including the grey and black design and the lack of a hard border. The image of Sedin also pops out of the card, especially as he’s wearing his yellow Sweden kit, which contrasts nicely with the understated background.

Along with his twin Daniel, they will be eligible for the Hall of Fame in 2022. Prices will go up rapidly if and when they get enough votes on the ballot. 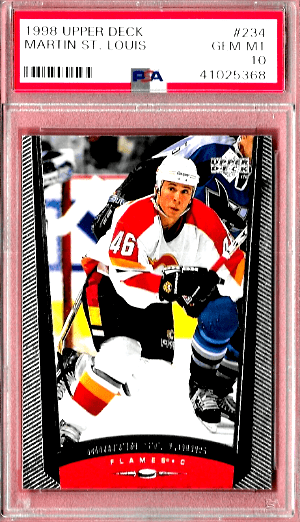 Martin St. Louis rounds out the list. Another Hall of Famer from the class of 2018 won the Lester B. Pearson Award and Hart Memorial Trophy as the NHL’s most valuable player in 2003–04, also winning his first Art Ross Trophy. He added a second in 2013, becoming the oldest player to lead the NHL in scoring.

Marty’s 1998-99 Upper Deck card is before its time, with a modern design and a lined border with silver chrome trim. The card comes with two parallels; Exclusives serial-numbered to /100 and Exclusives 1 of 1. There’s also a Gold Reserve variation, swapping the silver chrome for gold.

Given the chrome and the lack of a standard border, it’s difficult to find gem mint copies.

Despite dwindling offensive numbers, the 1990s still had its fair share of legends who made their debut during the decade.

Best 1990’s Hockey Rookie Card: We love the 1990 Jaromir Jagr OPC Premier rookie card and feel this card will be tops in terms of ROI out of the bunch, although the 1991 Teemu Selanne Upper Deck French RC is outstanding as well

The average ‘90s hockey card might be worth nothing, but the same can’t be said about Brodeur’s Score RC or any of the options that made it onto the list above.

As always, we would look for graded copies, whether from BGS, SGC, or PSA. (The condition is the reason for higher values, especially for cards mass-produced so heavily at the time.)

Look out for Hall of Famers for the best hockey rookies from the 1990s, as they tend to be an excellent low-risk, long-term investment option.