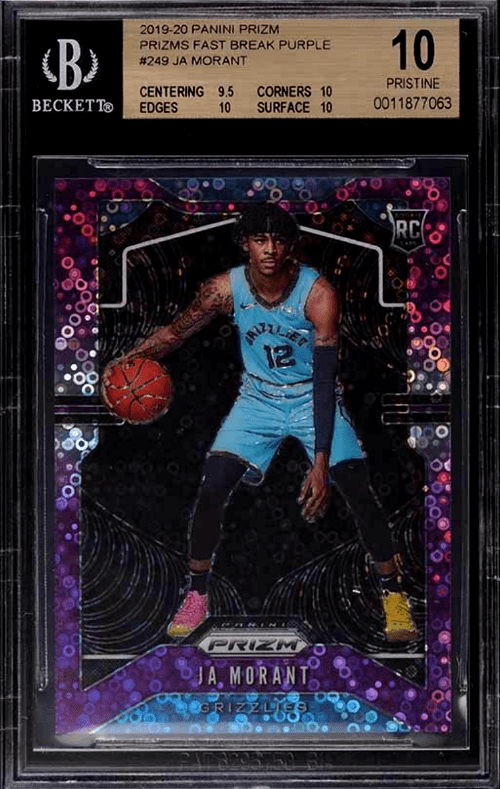 We’re looking at more sports card investment strategies today, primarily focusing on NBA options. Specifically, we’ll be delving into second-year players, and how they can be used for quick flips or great long-term investments.

As methods go, this is one of the riskier ones overall, but there is potential for massive profits if you choose wisely.

Here’s everything you need to know about investing in second-year NBA players, including previous and current examples, and what to expect from a volatile market.

As investment strategies go, this is fairly simple. Look at second year NBA players who have just come off a good rookie season, with an emphasis on heavy hitters. They’re going to cost a significant amount compared to most other RC releases, but there should be further profit to be had if they can keep it up into the next season and beyond.

Think Rookie of the Year winners, or young stars that have carried their franchise against all odds. We’ll list a number of examples below.

Typically, there’s a couple of decent options each season, but it will depend on the current crop of rookies, and their fortunes on the court. Some players get ‘found out’ after a year or so, as others become accustomed to their style of play. Others reach their natural ceiling and are still found wanting against the very best in the world.

“As such, a generational talent should be strongly preferred, although there won’t be players of that calibre available every year. At least there will be cheaper options, which could still rise accordingly.”

One potential stumbling block for the best current RCs is the high price of entry, as you’ll see from the examples we’ve listed below. However, these cards tend to have the biggest chance of multiplying in value, so it’s worth considering depending on your appetite for risk.

Luka Doncic and Ja Morant are two great examples of RCs which have come good if you decided to invest in their second year.

Take Doncic’s Panini Opulence, which was previously going for roughly $2,000, depending on the parallel. Now Luka Panini Opulence rookie cards (/10, /25) are now worth at minimum 5 or 6 times that amount which is a HUGE profit considering the short time it took to shoot up in price.

Examples of 2018 2nd year players that provided a HUGE ROI:

Most collectors and investors would love to rewind time to grab a copy of the Opulence, which is never going to happen. The next best thing is to look at second-year stars in 2020, as the same rules should apply in a year or so.

In terms of current NBA players, Zion Williamson and Coby White are two great options. However, Zion has a chequered injury history, and one wrong move could see prices tumbling. It’s unlikely, but it’s one of the risks you’ll have to be willing to take if you’re hoping to see the largest profit possible.

Here’s a rundown of some great options that have potential;

We’ll check back in 12 months or so to provide an update on prices, but Zion does look to be the pick of the duo and is starting to thrive in a league debut without restrictions.

It’ll depend on your appetite for risk, but it should all work out as the player has already begun to show signs of greatness, personality, and other factors will come into play, while it helps if they play for a team franchise that actually has a chance of winning something in the first place.

Of course, it could all go wrong, but the same is true for any sports card investment. For a safer bet, we’d look to tried and tested NBA legends and vets, such as the likes of Michael Jordan or LeBron James.

Most Rookies of the Year winners shoot up in value throughout their first season and go up further still the year later if they can keep up the level of their performances.

It’s an expensive endeavor to invest in their RCs given the typical asking price, but it could end up being a fraction of the overall value in a few years or more.

At worst, you should still be able to claw back most of your original investment, while you’ll have a better idea of the market for high-ticket items.