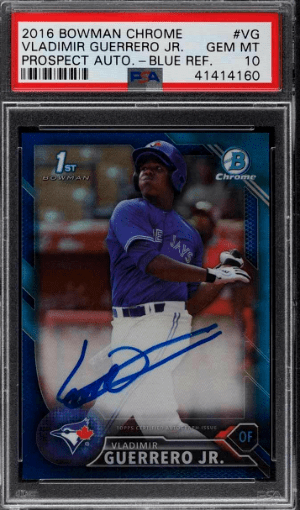 As of right now, the collectible sports card market is booming. It’s been a strange couple of years for baseball, with a lack of fans, and numerous restrictions relating to Covid-19.

Take Rockies outfielder Ian Desmond, who announced he will opt-out of the 2021 season, marking his second straight year out of the sport amid the crisis.

It’s even harder for emerging rookies and prospects, with fewer opportunities and increased pressure to perform. That has led to a number of bargain RCs, that are being overlooked in favor of more certain investments.

Here’s a rundown with seven of the best buy low’ rookie cards on the market right now, that we consider being underpriced compared to their ability and potential to succeed… It is somewhat like buying a lotto ticket… enjoy the rush.

Some of the bigger names from recent years make the list, and many of the cards can be found online with only a couple of bids having been placed. As always, we’d look for gem mint copies whenever possible, especially as they were all released fairly recently. 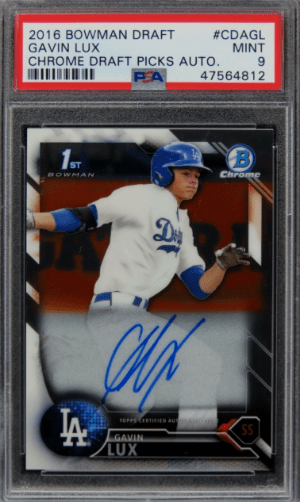 Gavin Lux was MLB’s No. 2 prospect last season, although he wound up playing just 19 games (69 plate appearances) while recording .175/.246/.349 with three home runs in 2020. He might struggle to find game time with the Dodgers at present, and that has led to a lull in his RC prices.

The 2016 Bowman Chrome Draft is a great pick, as a signed edition that is also his ‘1st Bowman’ card. There are lots of parallels to be on the lookout for, and he’s sure to get another chance to shine in the next couple of years. It’s worth remembering that he was the No. 2 prospects for a reason. 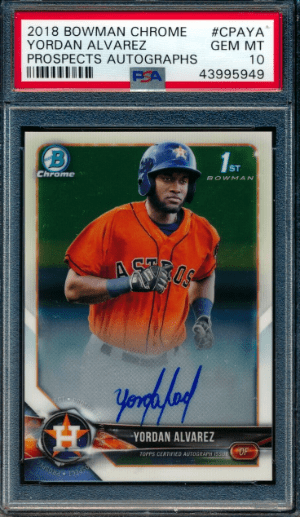 Another talented option comes in the form of Yordan Alverez. The former AL Rookie of the Year’s adjusted 173 OPS+ was the most by any rookie with 350 plate appearances since Shoeless Joe Jackson (193) in 1911, but disaster struck when he caught Covid-19, and then a torn patellar tendon which ended with arthroscopic surgery on both of his knees.

Question marks remain upon his return, but his 2018 Bowman Chrome RC is still a great option given he should be back to full health. Air Yordan is another player to watch this season. 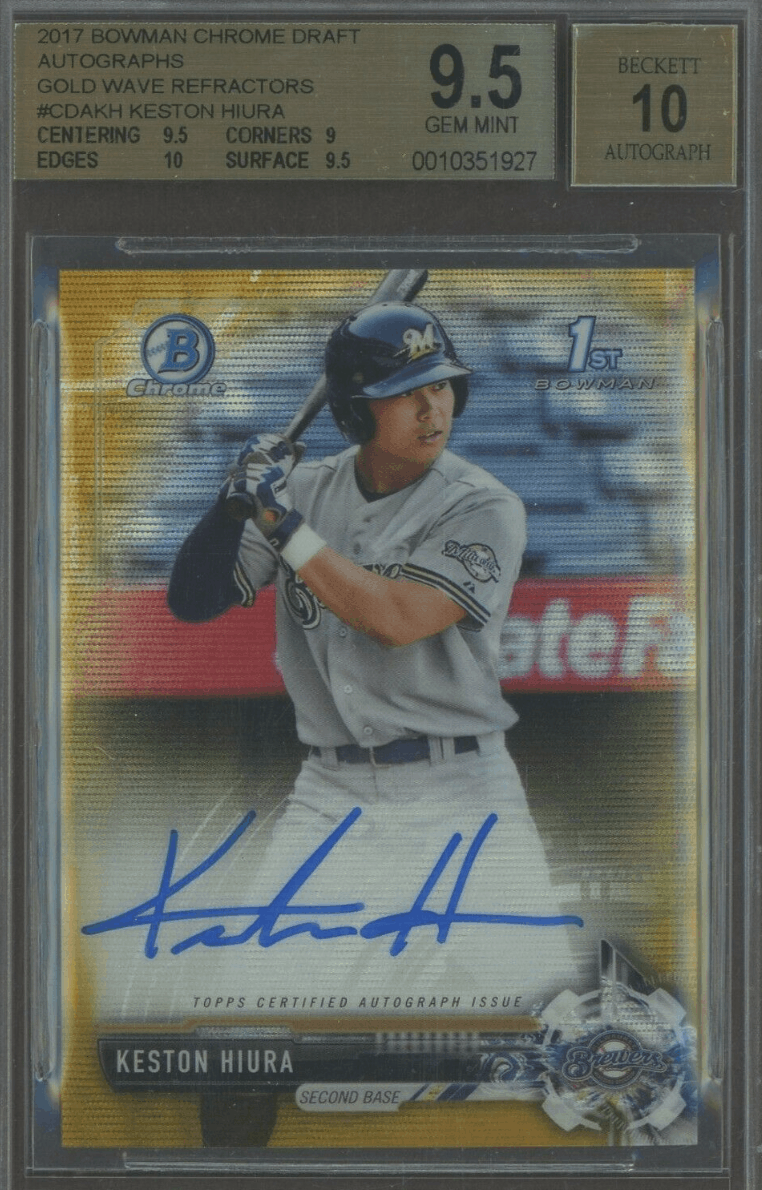 First base has been a difficult position to fill for the Milwaukee Brewers, but Keston Hiura seems likely to move to accommodate free-agent signee, Kolten Wong. Brewers president of baseball operations David Stearns has clarified;

“This doesn’t completely close Keston off from second base with the right matchups or later in his career. But for now, it fits best with our team at first, and he understands that.”

Hiura’s 2017 Bowman RC is signed and shows him in his Brewers home jersey waiting to take the pitch over the wall. Even the rarest parallels are reasonably affordable, although that could all change depending on how things go for the player in his new role. 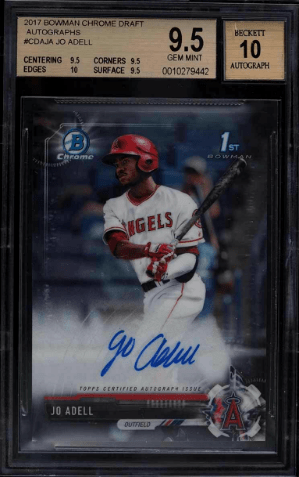 Jo Adell is next up. He struggled with the Angels during his debut season, but it’s worth remembering that he’s still only 21. The player will have multiple opportunities to prove his worth in the coming year, although it’s likely that Adell will start the 2021 season in the minor leagues.

Must Own: Mike Trout Rookie Cards

His signed card from the 2017 Chrome Draft Pick Autographs set is what we’d look at, while there’s an unsigned version that has dipped dramatically in value.

“You might have to wait a year or two to see the best ROI, but I wouldn’t count Adell out yet.” 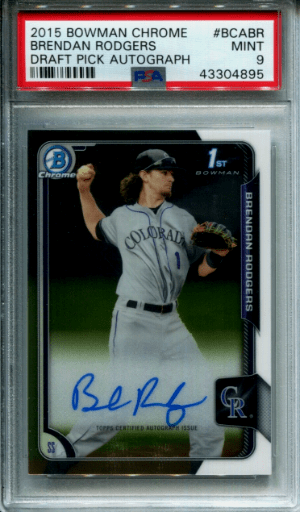 You’ll have to head back to 2015 to find Brendan Rodgers’ RC, having been drafted third overall by the Colorado Rockies that year. It looks like a pathway may have opened to a starting third baseman spot, as long as he can avoid the various injuries that have prevented him from getting the chance to play at the MLB level consistently.

Rodgers’ Bowman Chrome RC is one of the most affordable options to make the list and could be a great budget-friendly investment.

Vladimir Guerrero Jr. has struggled with his weight and overall fitness since making his MLB debut. However, the superstar 21-year-old has reportedly dropped 40 pounds compared to last season, and that should improve his consistency at the plate.

The 2016 Guerrero Jr. Bowman Chrome card is still the one to own, and pristine copies of the rarer parallels are currently valued in the low four-figure range. With a couple of tweaks to his game, Guerrero Jr. could be unstoppable. There’s a great potential ROI here. 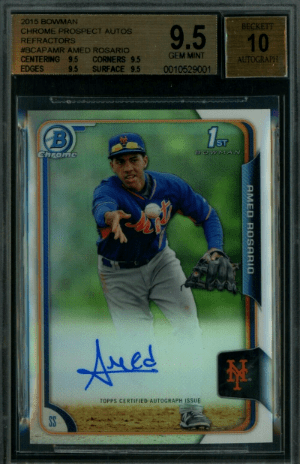 Once seen as the shortstop of the future, Amed Rosario produced a disappointing .252/.272/.371 batting line in his 147 plate appearances last season. Having joined Cleveland in January, there are rumors that he could be traded again.

At the age of 25, Rosario still has time, while interest in his rookie cards has cooled off entirely. Now could be a great time to grab a copy of his 2015 BCP card, especially if he joins a team with a guaranteed starting position.

For every Ronald Acuna Jr, there are dozens of rookies and prospects that fail to make the cut or fall at the first hurdle. The players mentioned above may have seen their progression halted for one reason or another, but they all have time to prove the doubters wrong over the next couple of years.

Investment Rating: Risky Buy (3 out of 5)… we suggest taking a chance on no more than 1 maybe 2 of these guys as they are not proven and their cards could end up close to worthless if they really stink up the place (BUT the rewards are very large if they hit)

There’s a chance that everything could go wrong, but that’s always a risk when you invest in RCs or prospects that are still starting out. Some look to be more likely to achieve greater than others, and that’s reflected in their current asking price. (Think Alvarez or Guerrero Jr.)

The majority of the cards on this list are at all time lows, and could be a great source of profit in the future. Of course, they’ll only dip further once it’s certain that the player won’t make the required grade. If you have faith in any of the young stars listed above, it has to be a no-brainer if you’re thinking about investing in their best RC.