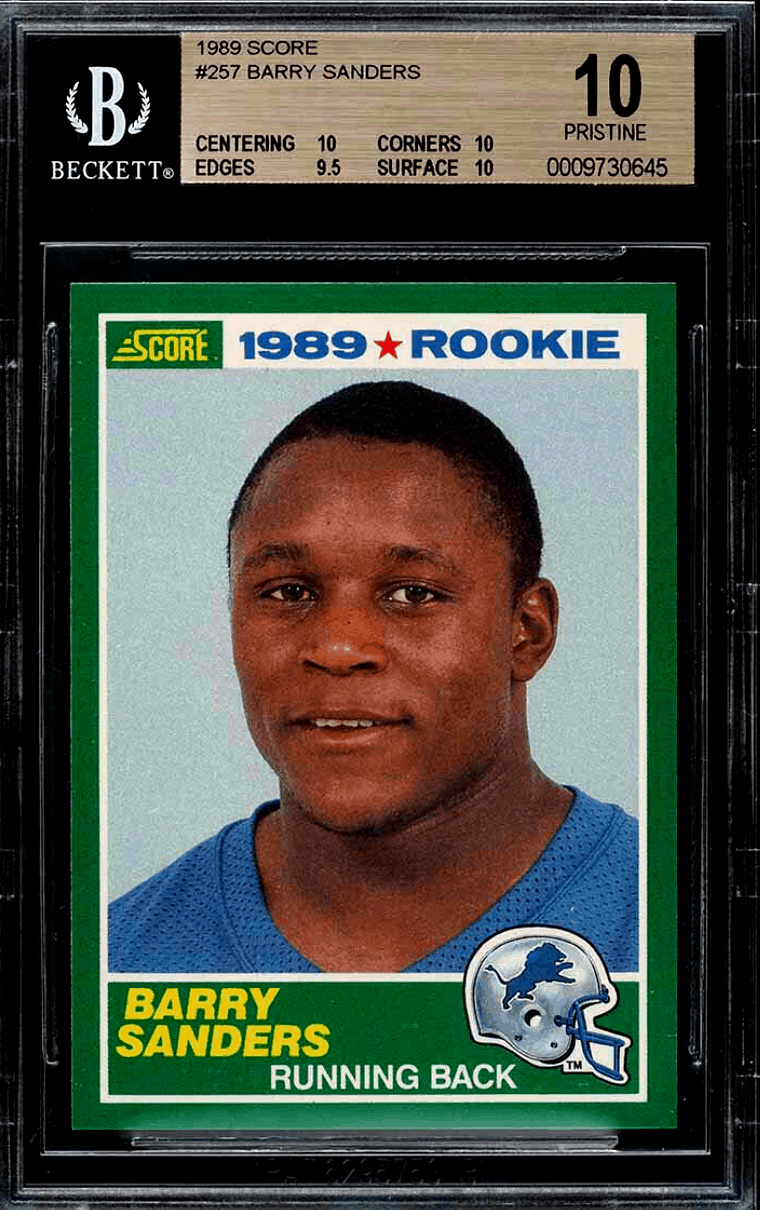 Barry Sanders (07/16/68) is a former Detroit Lions running back who played in the Pro Bowl for each of his ten NFL seasons. Named as the Rookie of the Year in 1989, he dominated over the next decade and ended as the MVP in 1997.

Known for his elusiveness, Sanders still holds a number of records, including the most rushing touchdowns in a season. However, he played in an era that saw an explosion in terms of the sheer number of cards on offer, making it hard to tell which ones are worth anything.

If you have only one Barry Sanders rookie card sitting in your old grade school Captain America lunch pale at home and you are unsure which it is you better hope it is the Score #257 rookie card (and if it is in Pristine condition go buy a lotto ticket).

The card shows Barry with a dazed and confused look as if he just rolled out of bed and has yet to have his coffee.

Topps picked out a green border and all the rookies in the 1989 Score Football Card set were marked with a “1989 Rookie” in blue at the top of the card… the Lions helmet is depicted as the bottom right with his name in yellow at the bottom left and running back in the center. 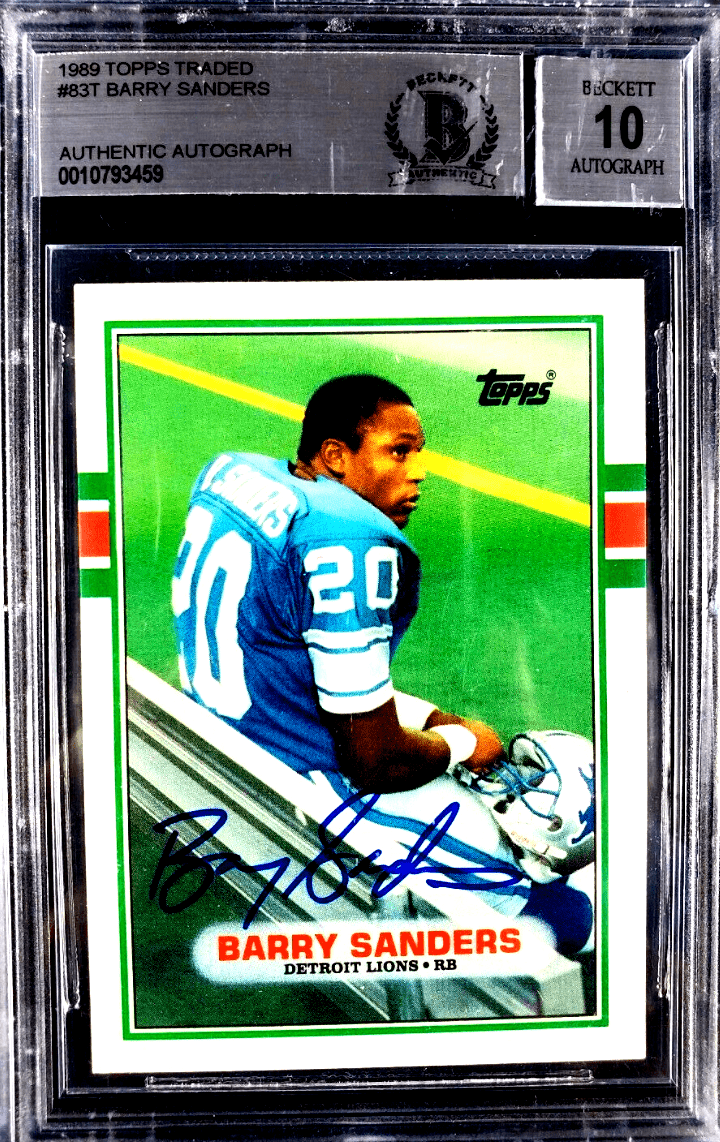 The Barry Sanders rookie card Topps 83T is another great option for Barry Sander investors looking to add another card to their collection.

Numbered #83T the card shows Sanders on the bench looking up at the scoreboard after galloping for an 89-yard touchdown turn… just another day at the office for Mr. Sanders… is it lunchtime yet?

A black Topps logo is depicted in the top right-hand corner and Sanders is outlined in a white border… honestly not the best-looking card in the world but not the worse either… could we do better? most likely yes. 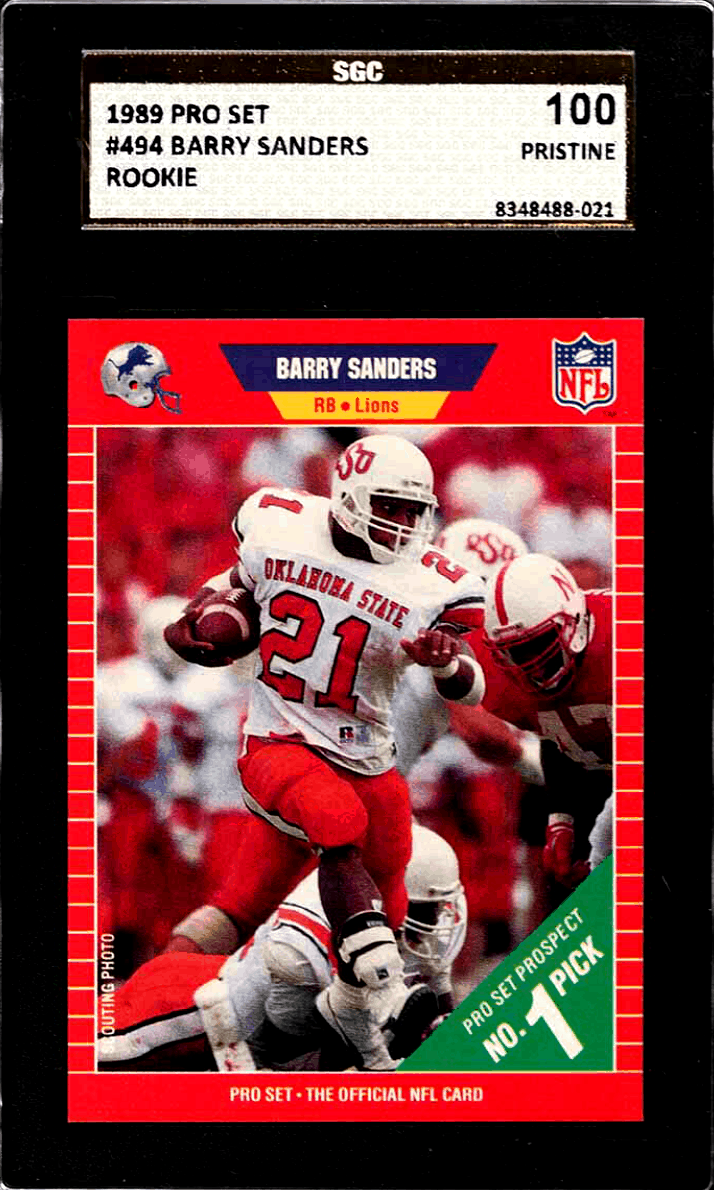 It was down to this card and the Barry Sanders Oscar Meyer Police rookie card for our final pick… and this card won by just a tad (we took a vote while chowing down on Imo’s bacon pizza for lunch).

The card shows Barry in his white Oklahoma State college football jersey with red pants. Numbered #494 the card shows Sanders making a cut to the outside and BAM he is off to the races (and literally only a horse would be able to catch him at this point).

We love the Red theme to this card as it has a thick red border, the fans in the background are mostly red, red pants, and OK State is playing Nebraska who is decked out in their away jerseys which are also red… makes for one bad-ass looking card… we might actually buy one right now 🙂 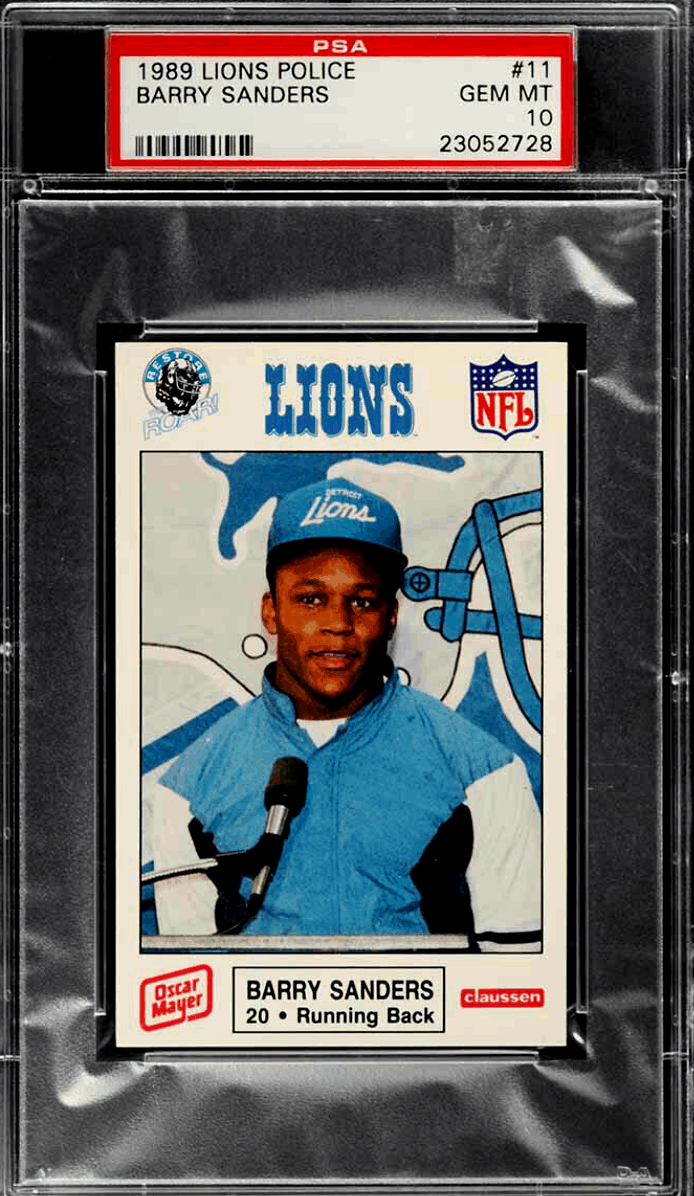 There were not any specifically made Barry Sanders auto rookie cards, BUT Sanders did sign quite a bit of card in his early days. You can usually find a few Barry sanders Autographed rookie cards/football cards up on eBay auctions at any time. 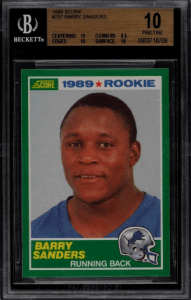 Please email us at value@goldcardauctions.com if you want an estimated value of your Barry rookie card (include a few photos… the more, the better).

Barry Sanders will be forever remembered as one of the best running backs in the league and, in many fans, the BEST. There has never been a running back like Barry as he had an uncanny gift of speed, cutting ability, and breakaway speed, and he could still go up the gut of the defense.

Barry Sanders’s rookie cards (the Score in particular) should go nothing but up yearly with a juicy ROI to boot.

That are not rookie cards. Here we will look at Barry Sanders football cards that are not RCs. This is by special request for a follower on our Facebook page. 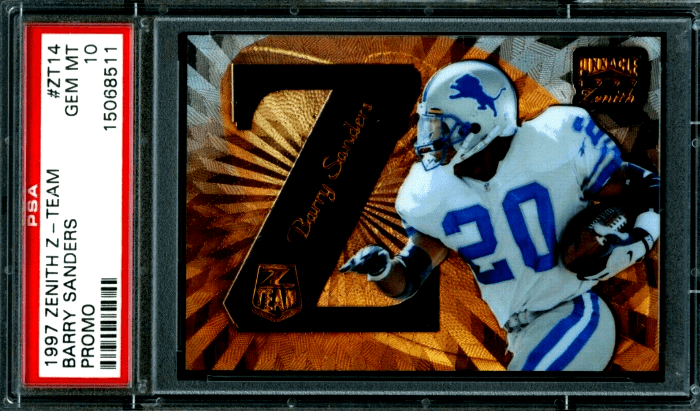 Ideal Sanders card for kids looking to get into the hobby as it will only cost around $20 at the highest grades… of course, the price could be up $10 or $20 in a year but still very reasonable and a great birthday, Christmas, etc gift for your kid.

The card is numbered #ZT114 and shows Sanders on the loose, ball in hand, bye-bye… touchdown! Like we said a great starter card for your kid. 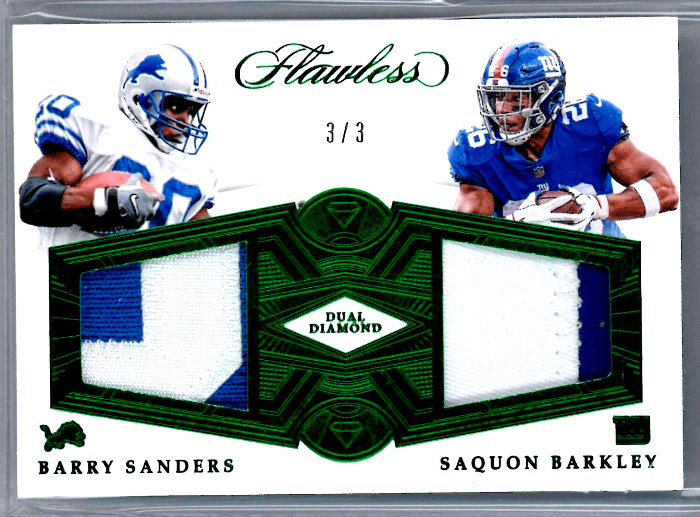 This is probably our favorite Barry Sanders football card that doesn’t have a rookie card attached to it.

A sick-ass dual-patch football card that includes Saquon Barkley as his rookie card… Barkley is a great talent but will never match the speed or skill of sanders.

Numbered #DDSB there is an SP and SSP version. 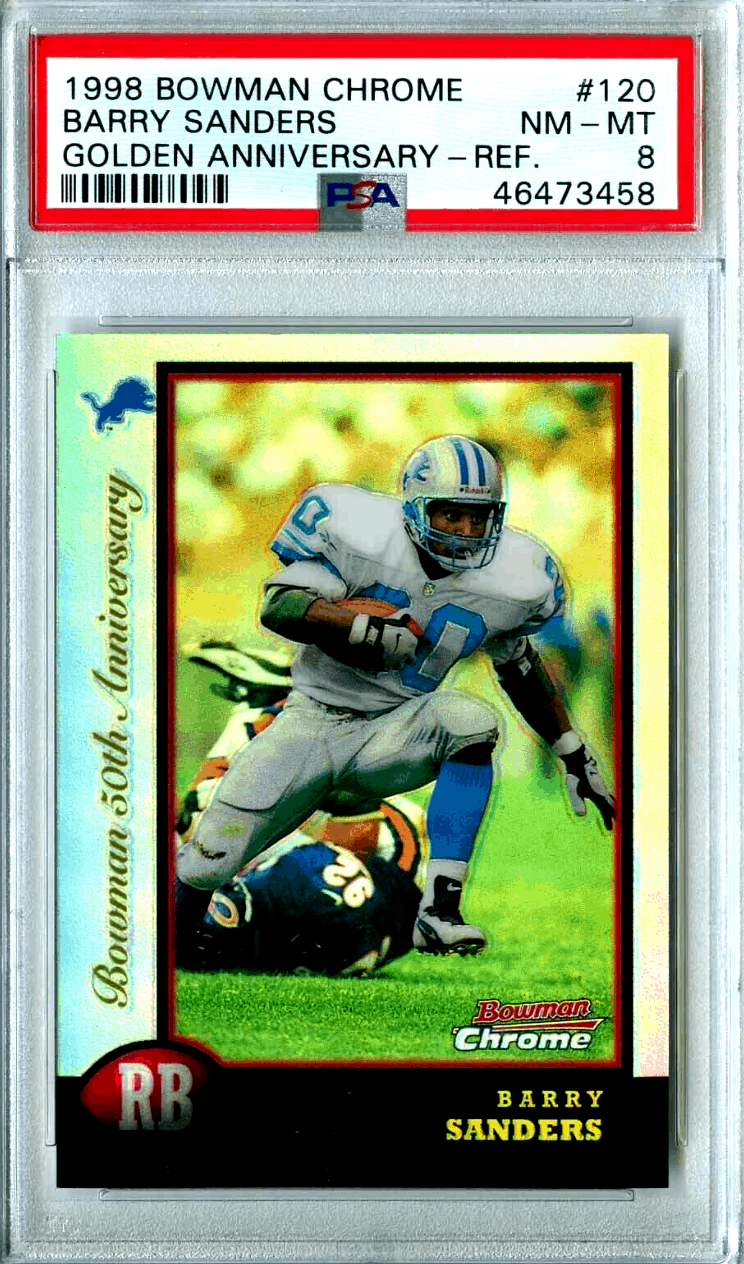 We said the Sanders/Barkley football card was our favorite, but this one is right up there… a sharp-looking, high-end football card for Sanders fanboys.

Numbered #120 the card shows Sanders with the ball in their right hand making a cut that no other player in the league can make… a great card but the price is up there.