The further we move away from the steroid ERA, the more lucrative Barry Bonds rookie cards will become. You could easily make a case for Barry being the best baseball player in terms of performance and stats. If you don’t already own a Bonds RC, please correct this issue ASAP. 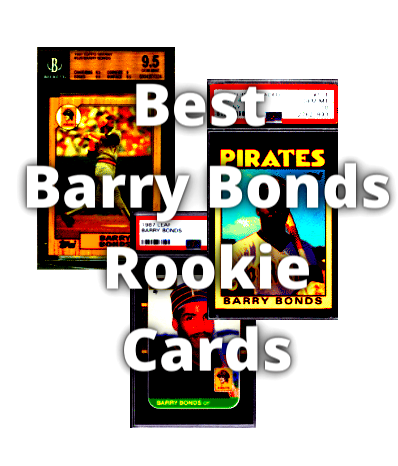 A 14-time All-Star, his stats and numbers are legendary among baseball fans. Bonds was the home run king; he’s the all-time leader in walks and owns a career 1.051 OPS.

Unfortunately, in November of 2007, Barry Bonds was indicted on perjury and obstruction of justice charges regarding the BALCO investigation (Barry Bonds RCs sank in value).

The case against Bonds stated he lied under oath about his alleged use of steroids. Now everyone in baseball knew this Bond was a juicer, BUT so were many other players at the time.

Despite controversies regarding steroid use, his rookie cards are still some of the more popular in the hobby. The Giants retired his number 25 shirt following his retirement (many close to the organization predicted this would never happen).

We’ve listed his best rookie cards to look out for and provided an investment outlook for the near future.

Pretty much the same card as the above, except more of them were produced. The card has the same bright, bold yellow “Pirates” lettering across the top is instantly recognizable to collectors.

Remarkable Fact: Bonds was initially drafted by the San Fransico Giants with the 39th pick in the 2nd round of the 1982 MBL Draft.

Topps Tiffany versions were sold in a limited number, offering collectors higher quality cards than the base version. Like many others on this list, a gem mint version will quickly sell for four figures.

They should be a good investment considering they were going for 400 dollars just over a decade ago. When he breaks into the Baseball Hall of Fame (and he eventually will), this card will pop.

Bonds’ Topps Tiffany card has a wood effect along the border, with an image of the player after a clean hit. The reverse has detailed stats about his ‘85/’86 seasons and mentions that he majored in Criminal Justice.

It’s another exciting option if you’re looking at cheaper Bonds rookie cards, although gem mint versions have picked up in value over recent years. A PSA 10 version shows an excellent mid to long-term trajectory.

The border makes it especially difficult to find this card in pristine condition, which is one of the main reasons it’s so expensive at higher grades.

Another Bonds rookie card with that retro Pirates baseball cap (it resembles a conductor hat, but we love it!).

The card also features another close-up picture of Barry, which makes us wonder if he was vain enough to ask for these in some of his early rookie card photo shoots.

Another close-up headshot of Bonds on one of his early cards. Image that!

The card is numbered #11 and again features what we are now calling the Pirates conductors hat. Maybe he requested to wear this as well! Either way a lovely Barry Bonds rookie card at an affordable price.

We’ll start with an affordable card with a great image and an eye-catching border.

The 1987 Classic Travel Update features Bonds in mid-sprint; as you might have guessed from the name, the back is green.

You’ll also find basic stats on the reverse and five classic baseball questions. Of the two versions to look out for, the Green Back is notably more valuable than the Yellow Back.

This Bonds rookie card is unique as it shows Bonds with a canary yellow batting hat on while looking off into the distance with a somewhat dazed look on his face.

The card is numbered #5 and the back simply shows his stats to go along with his vital statistics (i.e., height, weight).

However, an error is the main reason this card is one of the most expensive Bonds rookie options, as the image shows Johnny Ray on the front.

The mistake was discovered relatively quickly, so it’s one of the rarest available on our list. It’s also pricey, as a PSA 9 will go into the 4 figures.

Ironically, the most expensive Barry Bonds card doesn’t feature the player, but that is typical when looking at high-end error cards. It will likely remain his most valuable rookie card for the foreseeable future, even if it’s just for the story.

Here is a list of the most valuable Barry Bonds baseball cards. Please note all three of these cards are right around the same value if they were graded the same (i.e., all PSA 10). 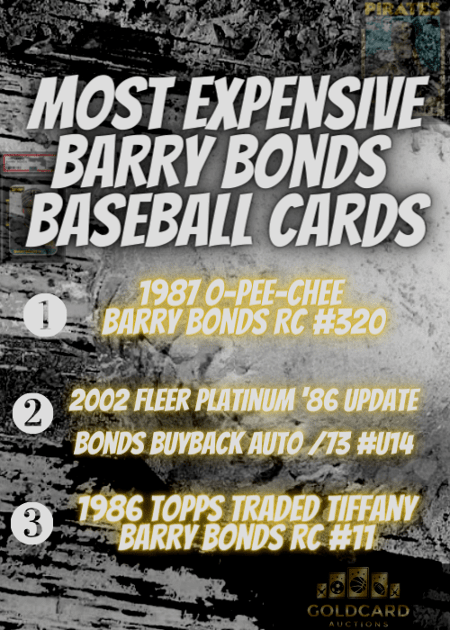 Even with Barry not being in the Baseball Hall of Fame, his rookie cards are still increasing in value at a moderate rate. Like any card, the exact price will depend on various factors.

The 1987 O-Pee-Chee rookie card #320 or the 1986 Topps Traded Tiffany rookie card ##11T are fighting for the top spot regarding which Barry Bonds rookie cards are worth the most.

If you have a Barry Bonds rookie card and would like an estimate on how much the card might be worth, please email us at info@goldcardauctions.com (include card photos). 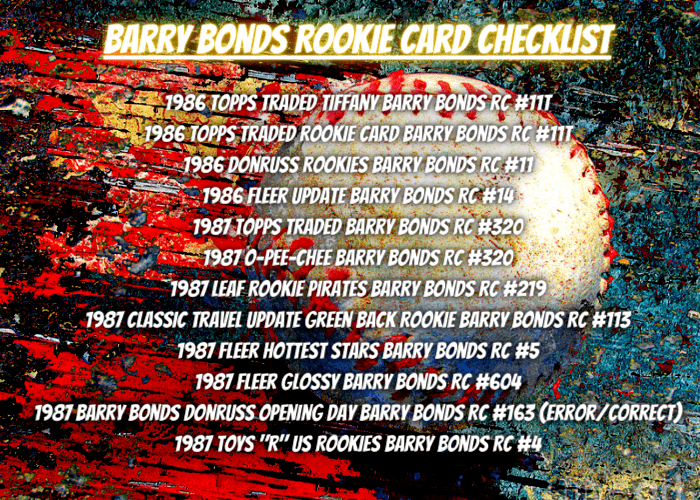 Bonds’ rookie cards will always be collectible, especially as we start to look back on his career through a nostalgic lens. Problems from the past tend to fade away in time, and he’s still well-liked.

While his rookie cards hail from the famous JUNK WAX ERA cards, there are still several diamonds amongst the rough, especially when you look at some rarer options available.

‘It’s essential to consider the Hall of Fame issues that have impacted his career post-MLB. However, support for Bonds’ claim has increased every year following his retirement, and it seems likely that he will eventually find his way into the Hall of Fame.

Must Read: Rookie Cards That Could Double

Bonds will always be an icon and would be considered the best player to step up to the plate, not for the PED issue.

As the years pass, fans, the media, and even the MLB are seemingly becoming more empathic regarding the steroids era.