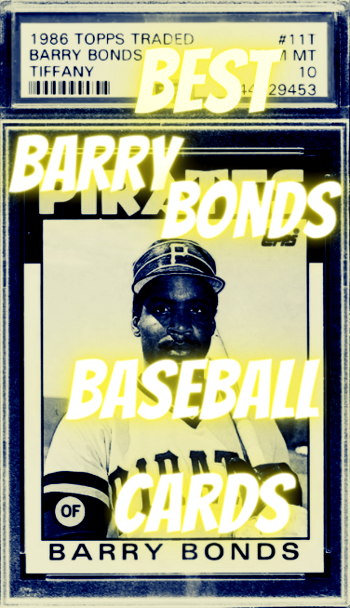 Barry Bonds debuted with the Pittsburgh Pirates in 1986. He would play seven years with the Pirates, winning two MVPs. Bonds would join the San Francisco Giants in 1993 and make an immediate impact.

He would win the MVP award during the 1993 season, over the next couple of years Bonds would still put up great numbers for a number of seasons averaging nearly 35+ homer runs each year.

During the 2001 season, Bonds would have a historic season breaking Mark McGwire’s single-season home run record with 73 home runs.

During the time this was happening Bonds cards would reach an all-time high in value. Tons of collectors and buyers were investing heavily into Bonds cards, especially his rookie cards.

The hobby during this time was booming and then suddenly things quickly changed over the next couple of years.

Suspicion of steroids being used by many star players in baseball would play a big role in the sports card market.

Bonds cards that reached all-time in value would quickly decrease in value as a result of the steroid use impacting the game of baseball.

The impact of steroids in baseball would play a huge role in the sports card market for a number of years.

Eventually, the market would bounce back and many collectors or buyers are still investing in Bonds stuff today even with all of the rumored steroid allegations throughout his career.

Here are the Top 10 Barry Bonds cards, this list is based on which cards are the most popular and valuable.

The card that is regarded as the Holy Grail of Barry Bonds cards is his 1986 Topps Traded Tiffany rookie card.

This card is a rare short-printed example and very sought after in high-grade examples. Investing in this card of Bonds could be one of those high risk high rearward investments. 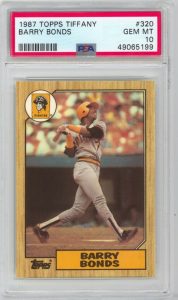 Topps also created a rare Topps Tiffany rookie card of Bonds similar to the Topps Traded card. A PSA 10 high-grade example ranges from $1,300-1,800, this card is trending up in value within the last couple of months.

This card has a nice nostalgic feel to it from Topps of cards from the 1980s and this is one of the rare sought-after gems from that era.

Only 248 examples have received a PSA 10, which means this card will only become tougher to find. 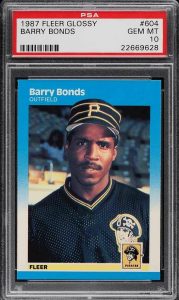 Barry Bonds Fleer rookie card is arguably his most popular rookie card. This card in the early 2000s was an extremely hot card and very sought after.

This card comes in both a glossy and regular version, with the glossy version being more valuable.

A great cheaper alternative buy may be picking up this Bonds Fleer Glossy rookie in a PSA 9 example.

The glossy versions in graded PSA 9 examples are selling for $30-50. If you’re a bulk investor this is a great buy at this value. I could see these doubling in value in the near future. 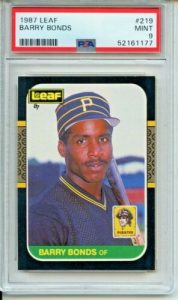 This Leaf Barry Bonds rookie is a lot less common than his Fleer Glossy Rookie. Only 445 of these have received a PSA 9 example and just 94 PSA 10 examples.

PSA 9s are trending at the $150 range which is 3-4x the value higher of the Fleer Glossy rookie in a PSA 9.

Investing in a PSA 9 example of this card could pay off in the long term because 10s are already becoming very tough to find.

This card has a considerably low Population Report in high-grade PSA examples which eventually will help the long-term value of this card. 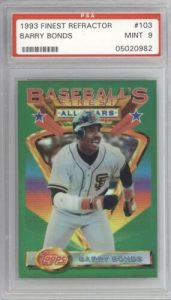 In 1993, Topps created an iconic baseball set which was the first of its kind.

This set would feature the first ever Refractor cards, which are cards that feature more shine and glare. The set would be called Topps Finest Refractors.

The regular Topps Finest version is similar except the cards refractor versions were created into its own set.

The refractor cards featured from this set are highly sought after and extremely rare especially this Bonds card.

The last sale of this Bonds Finest Refractor featured in a PSA 9 sold for $950 on eBay auction. Only 121 PSA 9s have been graded and just 38 PSA 10 examples.

This card will always have great value because it was the first of its kind to ever be created. Refractor cards today are still some of the most popular cards in the hobby.

This Bonds Refractor in a high-grade example is a great buy and a card that could easily double in value in the near future. 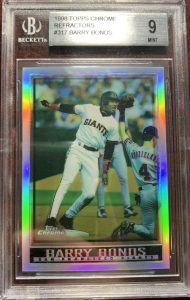 Many early years of Topps Chrome refractors are becoming very tough to find because they had a limited print run.

This Barry Bonds card is a rare short-printed refractor from 1998, a high-grade example will cost you $1,000+.

This card is already extremely hard to find and will only become even more difficult to find in the coming years.

Topps Chrome Refractors featured from the first couple of years from Topps will always have great long-term value. 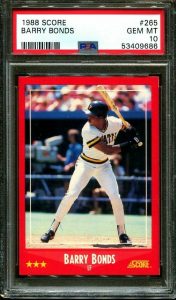 Investing in a player’s second-year card became a big trend during 2020, especially once rookie cards become too expensive for some collectors or buyers.

Barry Bonds is featured in the 1988 score set, the card is a great alternative buy. A PSA 10 example can be bought for about 70 shipped and there are only 73 total graded 10s.

The value of this card could trend up in value because this is a limited card featured in a high-grade example. 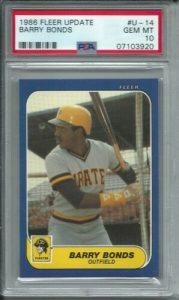 One of Barry Bonds’s first cards was his 1986 Fleer Update rookie, this card is actually considered an XRC.

An XRC means it’s his first card issued by a major manufacturer. This card is listed as his PSA Future Hall of Fame Registry card.

The PSA message board members vote on which player’s card is considered his most collectible or desirable and then the card is chosen as their registry card.

This means that when Bonds gets elected to the Hall of Fame someday this card will be regarded as his Hall of Fame rookie registry card.

A PSA 10 example of this card will cost $455 and a PSA 9 example around $50-60 range. This is another must-have for any Bonds collector or buyer. 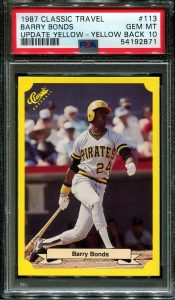 This Barry Bonds card featured in a PSA 10 example is already becoming tough to find, there are only 414 graded 10 examples.

A card like this is a good alternative to buy in a PSA 9 example if you don’t want to invest too much in Bonds. This card also features a different variation with a greenback which is a lot rarer and sells for 3-4 times the value of the other yellow back version.

This is another must-have for any Bonds collector or buyer.

This card was the official autographed card of Bonds featured from the Classic best set. Bonds would sign 2,050 examples and included the number inscription with each auto he signed.

A PSA 9 example of this card recently sold for $500, these are becoming tougher to find slabbed and in high-graded.

This card will only become tougher to find, there is a lot of upside for this card to go up in value because it’s considered his first official licensed autographed card.

Barry Bonds put up historic numbers in his career, he would become the all-time home run leader in major league baseball with 762.

* Investors Rating/Risk Return – 4.81 out of 5 with low risk and moderately high return

Bonds had one of the most controversial careers and all of the steroid suspicions have put a certain cap on the value of his cards in some instances.

Some buyers or collectors are still investing in Bonds thinking baseball one day will put him in the Hall of Fame, however other collectors or buyers are completely staying away from buying Bonds as a result of how quickly his cards dropped in value in the mid-2000s.

I do believe baseball has already elected players who used PED’s as well, which will help Bonds’s Hall of Fame case in the future.

Some of these cards mentioned above are too low of a value to pass up, investing in them now could pay in the near future. Many of these cards would be great additions to your collection as well.

Bond’s final year being on the Hall of Fame ballot is in 2022. Earlier this year he received a 61.8 percentage from the writers, Bonds will need to reach 75 percent in January 2022 in order to be elected on his final year.

This will be a long shot for Bonds to reach the Hall of Fame next year but he still could (and most likely would) get voted in through the committee vote in the future.