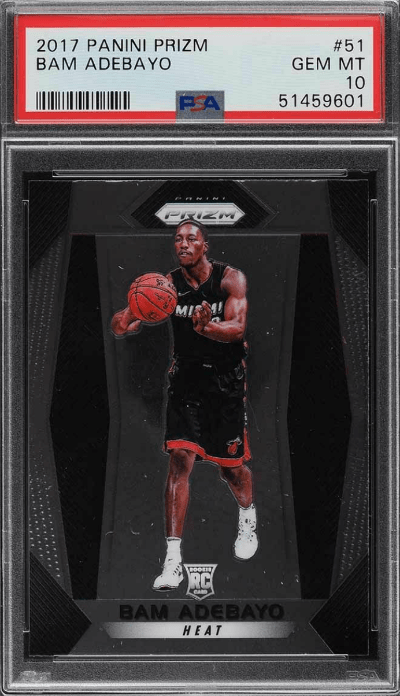 The alumnus of John Calipari’s University of Kentucky program averaged 6.9 points, 5.5 rebounds, 1.5 assists, and half a steal in 69 games as a rookie.

At 6’9″ tall, Adebayo embodies the hybrid game that’s become so valuable in the NBA. He excels as a passer and has a well-developed arsenal of scoring moves.

As a top-15 pick, there’s no shortage of Bam Adebayo rookie cards on the market. We’ve selected some standout cards among the Bam RC pool. 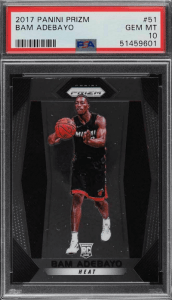 The Panini Prizm set is one of the most anticipated among collectors each year that it releases. The 2017-18 set continues to generate strong demand.

The 2017-18 Bam Adebayo Panini Prizm RC #51 is perfect for those who like their iPhone and Windows settings on “dark” mode.

It shows Adebayo in his black Miami Heat jersey, releasing a chest pass as he sucks in his lower lip in complete concentration.

The card features futuristic-looking accents in both lined and braille patterns. A Bam Adebayo Heat nameplate is at the bottom, while a Prizm logo is atop. 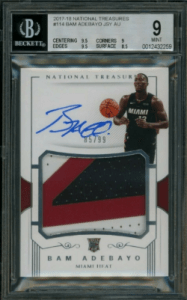 Panini National Treasures Rookie Cards feature both autographs and player patches, making them a treasured item in many collectors’ sets.

The vertical version features Adebayo apparently ready to receive (or having just dished) a pass. His head obscures the “e” in “National Treasure” at the card’s top border.

The card’s central feature is a player patch in a pinched rectangular shape. A blue ink signature is scrawled above the patch with a nameplate below.

The horizontal version of the card features an image of Bam with the ball tucked behind his head. The patch is to the left of his likeness, with a signature beneath.

Each card’s design has a panache that suits the premium National Treasures brand. Each also contains parallels of varying rarity. 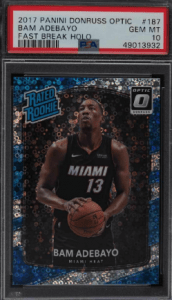 As one of the standouts from his rookie class, Bam Adebayo’s Donruss Optic RC #187 is one of the prime cards in the 2017-18 set.

The card features Adebayo in his black Heat jersey, crouched for a free throw with his eyes locked on the basket.

A rounded rectangular border frames his image. The “Rated Rookies” logo adorns the top left corner, while the Optic logo sits opposite. The front also includes a nameplate down low.

It’s a simple-yet-appealing card design that does not veer from the typical Donruss Optic aesthetic. 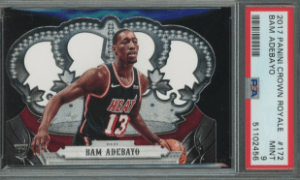 Looking for the most popular Bam Adebayo rookie card? Check out the 2017 Panini Prizm Bam Adebayo RC #51 as it is by far the most common on eBay auctions.

Need an estimated value on a card? Email value@goldcardauctions.com.

Bam Adebayo has displayed a progressive trend throughout his career. In other words, he’s gotten better virtually every year.

As an investor, you like to see this. You hope that a player could trend towards the Hall of Fame (though this is always a lofty goal).

Considering the state of his game and the Heat’s organizational strength, Bam Adebayo rookie cards represent a pretty decent investment.