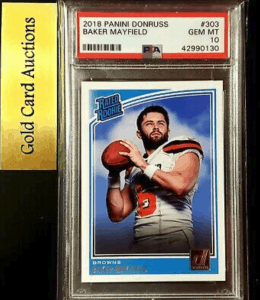 Baker Mayfield (04/14/95) is an American quarterback who plays for the Cleveland Browns in the NFL.

Mayfield has a variety of popular rookie cards after changing his team’s fortunes during a standout season where he was the number one pick in the 2018 NFL Draft.

The PFWA Rookie of the Year was instrumental as he led the Browns to victory after a dismal run of 19 losses in 2018, and went on to cement his place as their starting QB.

If you’re thinking of investing in one or a few of his rookie cards, here’s a list with five to look out for at auction.

This is by far the best Baker Mayfield rookie card for the everyday card investor.

The 2018 Mayfield Donruss Rated Rookie Card clocks in at a very affordable price tag generally ranging from $40 to $60.

This card will likely go up as the 2019 season progresses.

The card is numbered #303 and reads “First Heisman winner to go first overall since Cam in 2010… at the age of 23 years and 12 days, became the oldest player to be picked number one overall since Eli Manning in 2004.”

Another entry-level option, the front of this card has a refractor background with a full-length image of the player.

His name and team are located at the bottom, and there’s an RC logo on the top right, along with a Select logo on the other side. 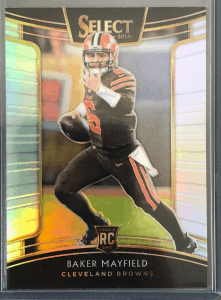 The reverse has a short paragraph about Mayfield’s breakthrough season in 2018, mentioning his career-high throw of 342 yards in week 5.

The RC logo makes it more interesting for potential collectors, which helps to bump the price up slightly.

You can pick up a 9.5 for roughly $100, which isn’t bad considering the hype around the up and coming QB.

It’s another great pick in the lower range, and it’s an interesting one for potential collectors.

However, you’ll have to be careful with ungraded cards as it can be difficult to identify the condition from photos.

An autographed version of the silver Prizm card causes the price to rise even further.

If you’re looking for a high-ticket card to invest in, there’s always the Panini Contenders edition. A 9 goes for upwards of $1000, while mint condition versions can go for double.

We love this card as a SOLID long-term investment for high-end collectors. 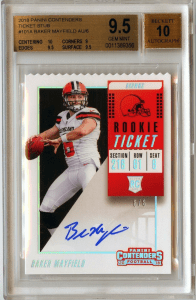 The card is split diagonally with a black and white background.

There’s an image of Mayfield on the left-hand side, and the rookie ticket is located on the right in red. The signature is found on the lighter section so it’s easy to spot, while the back is also worth checking out.

As well as height and weight, there’s a quote which credits video games as the common ground he found between Browns’ wide receiver Josh Gordon.

It’s undoubtedly a lot of money to spend, but the 2018 Contenders series is one of the most popular Mayfield rookie cards on the market.

This is one of the most expensive Mayfield RCs on the market, coming in at over $8000 for a 9.5 graded version.

The card itself is understated compared to many of the others, but that only adds to its perceived value.

The image features the player in action for Cleveland, with the patch used as the focal point in the middle.

There’s a prominent signature, and you’ll find a short paragraph about Mayfield on the reverse.

It’s a simple quote about the hard work he’s putting into his dream job.

The serial number is located on the front, and it’s rare as there aren’t many mint copies available.

It’s one of the most desirable NFL rookie cards available, wanted by Mayfield fans, Browns fans, and any serious collector. The price has continued to shoot up following his successful debut season.

The final card on our list is available for anywhere in the $200-$300 range, and there’s generally a decent number of bids if it’s at an auction.

Another interesting option, this one comes with a dual patch and a signature on the front of the card.

There’s a silver and white refractor background that will catch the eye, as well as an RC logo located at the bottom.

The back has a bigger version of the front image, along with a guarantee for the player-worn material and the autograph.

Overall, it’s a good buy in the mid-range, although it’s never likely to reach the prices of some of the rarer cards on our list.

There’s still a potential for profit, as long as you’re able to get a good deal.

Mayfield is an exciting player, and prices for his rookie cards are beginning to explode following his breakthrough season.

It took 635 days for Cleveland to record a win, but their QB wasted no time when he proved he was up to the job.

He was the first pick in the 2018 NFL Draft for a reason, although he still has a long way to go before he reaches the limits of his potential.

His coaches tend to agree that he has tremendous mental fortitude, which does bode well for his future in the sport.

Cleveland are seen as minor playoff hopefuls for next season.

If Mayfield can lead them to glory his rookie cards will undoubtedly go through the roof, but savvy investors should be wary of the hype.

There is a possibility for profit, but many cards have already been inflated, and there’s a heap of options on the market.