Auston Matthews was born on 17/9/97, and he was the first pick in the 2016 NHL Entry Draft. He has turned out to be one of the better players in the NHL when it comes to goal scoring.

He currently plays for the Toronto Maple Leafs as a center and spent a season with NLA side ZSC Lions.

Here’s a trio of his best rookie cards if you’re looking to invest. 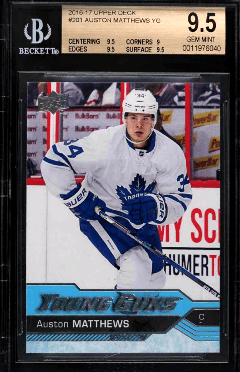 This UD Young Guns version is a great card to pick up if you want something affordable, and they’re a number of mint versions on the market.

Matthews was a top prospect by 2016, and his Young Guns card is highly sought after. It’s his original official rookie card, and it’s the first in his Maple Leaf uniform.

It’s a clean card and easily one of the better in terms of ROI. 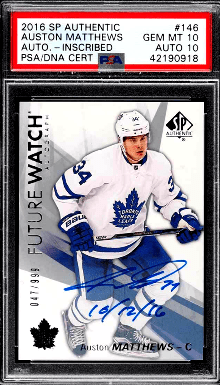 This autographed card is a step up in terms of price for obvious reasons.

With 999 copies it isn’t the rarest rookie card available, but the SP Authentic brand tends to sell at a premium.

It’s another great-looking card, showing off the Maple Leafs kit with an all-white and blue background. 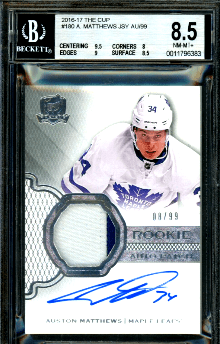 The Cup version is ultra-high-end, and the most expensive Matthews card money can buy.

An eye-watering price of upwards of $7000 will get you a card signed by the player, while it’s a solid investment for the future.

You’ll be the envy of almost every collector, but try explaining that to your significant other. 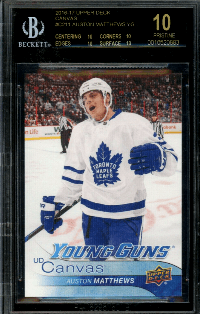 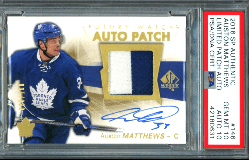 Matthews is a record-breaking player with a long career ahead of him at the pinnacle of the sport.

His early achievements will make his rookie cards even more valuable, although many have been priced competitively already.

Coach Mike Babcock has confirmed more time on the ice next year, so Matthews could easily go on to have more success in the future.

Check out our Best Baseball Cards to Buy Right Now