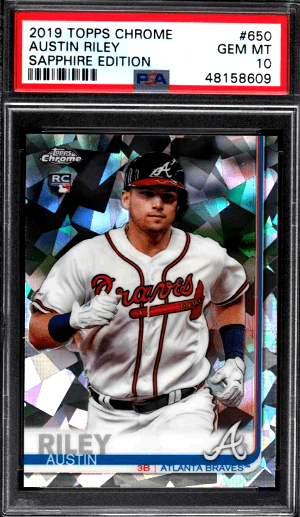 The Atlanta Braves selected Austin Riley (4/2/1997) with the 41st overall pick in the 2015 MLB Draft‘s first round. He played his high school ball at DeSoto Central High School in Southaven, MS.

In his rookie season, Riley posted 18 home runs, 49 RBIs, and 41 runs in only 80 games. Riley possesses the size and athletic skill to be a five-tool player.

We’ve included both Riley’s prospect cards and cards from his MLB debut season in this list. 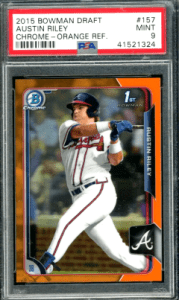 Technically a prospect card, the 2015 Austin Riley Bowman Chrome Refractor Auto RC #157 is one of the most in-demand cards for the Braves slugger.

It shows Riley in a white Braves uniform, both hands over his left shoulder as he completes a swing. The refractive surface gives Riley’s image a glossy effect.

The autograph is the most significant component of the card. The blue on-card auto blends seamlessly into the card’s design. A grey plate with faded edges frames the signature.

This is the leading Austin Riley prospect card. Its price point is roughly on par with rookie cards from Riley’s 2019 Major League debut season. 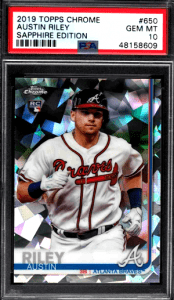 It features Riley mid-trot in his white Braves uni. The card’s backdrop is a refractive, icy pattern that catches the eye. Hence the “Sapphire” designation.

An inverted nameplate features “Riley” in large letters, with “Austin” in a smaller font underneath. Overall, it’s a thoroughly modern card that stands out among the pool of Riley’s rookie cards.

One can debate which Riley rookie card they prefer most. Based on the presentation alone, this one has to be in the conversation. The set was so popular that it sold out in less than 10 minutes upon being listed online. 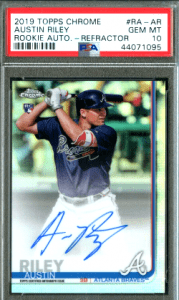 Riley’s is one of the set’s top cards of 76 rookie autographs. Riley appears in his dark blue Braves uniform, bat cocked as he stares down the pitcher.

This year’s Topps Chrome set embraces simple design features. A rounded sub-border lines the right and bottom borders of the card. The sub-border blends into a white translucent autograph plate.

The signature occupies the lower third of the card. A compact nameplate, Braves logo, and “Atlanta Braves” font sit beneath the autograph. 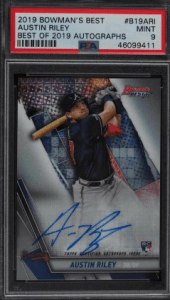 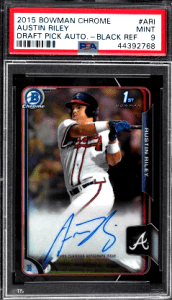 Each featured Austin Riley rookie card is available at accessible price points. For this reason alone, there is value in these cards.

Baseball cards have a strong track record of appreciation. With a talented roster of young stars, the Atlanta Braves have the potential to remain perennial contenders. This is good news for the value of Riley’s rookie cards.