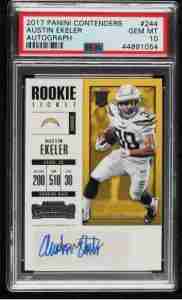 Austin Ekeler’s story is an inspirational one. He spent four years in college, performing well for Western Colorado.

However, when the 2017 draft came around, he was passed over and went undrafted.

When no one drafted him, he signed a three-year $1.66 million contract with the Los Angeles Chargers.

Now Austin Ekeler has emerged as one of the best running backs in the NFL.

Most players that emerge into superstars do so after getting drafted high. As a result, people know to look out for their rookie cards in the first year of their careers.

That was not the case for Austin Ekeler, and as a result, not as many people picked up his rookie card in his first professional season.

Now that he is coming into his own as a star player, the value of his rookie cards is on the rise.

If you can pick them up now, you have a great chance of turning a profit.

Here we are going to look at three of the best Austin Ekeler rookie cards on the market.

We will discuss everything that you need to know about these cards from an investment perspective.

Since Austin Ekeler was an undrafted player, not as many companies produced his rookie cards.

You cannot get his rookie cards in every brand that you would normally expect from players of his status.

As prices increase, it is a good idea to invest in Austin Ekeler’s cards before they really jump in price.

Here we are going to look at three of the best Austin Ekeler rookie cards on the market.

We will start with the most popular card from the Panini Group. 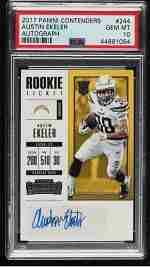 The first card comes from the 2017 Panini Contenders collection, and it is the 244th card in the collection of 400.

It displays Austin Ekeler in his white Los Angeles Chargers uniform as he makes a run with the football.

This is a valuable card that can be purchased at a PSA 10 grade and added to your collection.

It should rise in value over the next 10 years if Ekeler continues his current career trajectory.

An added benefit of getting this card is that it has his autograph below the image of Ekeler carrying the ball.

The back of the card displays Ekeler’s preseason stats. Notably, it describes his performance in the Chargers’ 2017 preseason finale.

Additionally, it lists his stats from college and mentions that he had the most rushing yards in the history of Division II football. 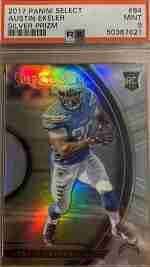 The next card on our list is from the 2017 Panini Select collection, and it has a silver Prizm border.

The card shows Ekeler running with the ball in the Chargers’ light blue uniforms.

On the back of the card, you will see that it is the 84th card in the collection of 300 that was released as a set by the Panini Group.

Below that, you can see the Chargers logo and a description of some of Austin Ekeler’s highlights from the 2017 NFL season.

You should not have much trouble purchasing this card for a reasonable price in good condition.

It can be bought online in SGC 9 MINT condition. 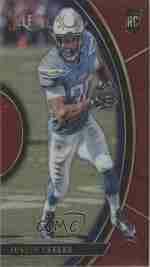 The final card that we are going to look at today is nearly identical to the one we just looked at. It uses the same image as the previous card.

That is because it is part of the same collection with a slight variation. Notably, this card has a maroon Prizm border instead of a silver one.

When the Panini Group released this set of cards, they added several variations to each card so that buyers had more incentives to purchase more packs.

As a result, you can purchase this card in several colors, including maroon.

The most expensive Austin Ekeler rookie card is the one we discussed first from the 2017 Panini Contenders collection.

This card can be purchased on COMC for $471.10. None of Ekeler’s cards have sold for tremendous amounts yet.

That is largely because he is still a young player and his cards are relatively easy to obtain.

As his career progresses and more time passes from his rookie year, his cards will rise in value.

Since Ekeler is still early in his career, we cannot say for certain how much his rookie cards will increase in value in the coming years.

However, since he broke out in the last few seasons, we expect his cards to consistently rise in value.

If you want to get an estimated value for an Austin Ekeler rookie card that you own, you can contact us.

Email us at value@goldcardauctions.com or leave a comment below and we will get back to you.

If the card is not graded, add at least two pictures to the email.

Austin Ekeler is a good player that we expect to continue to perform in the coming years.

If he continues to improve, the value of his rookie cards should continue to trend upwards.

Additionally, the Chargers are expected to perform well in the coming seasons, so that should improve his card’s prices.