Without the goaltending of Mr. Vasilevskiy, the Lighting may not even have made the playoffs. Yes. He is that good.

And yet his rookie cards are undervalued and in our opinion a great buy at current values if someone makes the mistake of listing one in the summer.

The Tampa Bay Lightning selected Andrei Vasilevskiy (7/25/1994) with the 19th overall pick in the 2012 NHL Entry Draft. How in the world did this guy fall to 19th is beyond the scope of this article but boy did the Lighting luck out that day.

At 6’3″, “Vasy” is a massive goalie with abnormal quick-twitch reactions. He’s become one of the NHL’s most feared and accomplished goaltenders.

The Tamba Bay Lightning remains one of the preeminent NHL franchises in the league and they just won the Stanley Cup for the second time in two years and we wouldn’t be stunned if they won it again in 2022.

Without further ado, let’s check out the top Andrei Vasilevskiy rookie cards in terms of ROI. 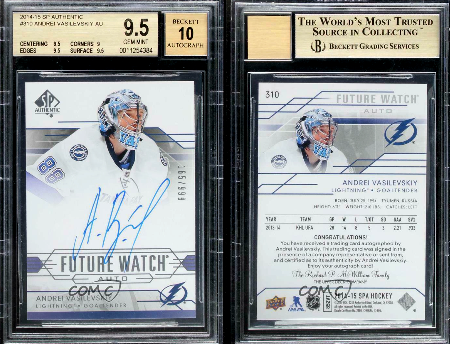 Not to be confused with the SP Authentic Future Watch Auto, this version also contains a player patch to go with the autograph.

It’s an outstanding-looking card, designed horizontally with the image of Vasilevskiy and the player patch commanding equal attention.

The image (like seemingly all Vasy card images), shows the goaltender in his white Lightning sweater and pads. He crosses his leg pads in a V-formation and holds his glove down toward the ice as he stares at the action.

The card’s graphics have a computer chip vibe, with a gold streak running across the card horizontally, framing the player patch.

Above the player patch is a “Future Watch Auto Patch” banner, and below is a compact autograph written in blue Sharpie.

This is one of the flashier Vasy rookie cards and commands strong prices.

O-Pee-Chee, an iconic manufacturer in the hockey space, maintains a retro look even with its modern cards.

The 2014 Andrei Vasilevskiy O-Pee-Chee Platinum RC #166 has an extremely distinct look, with a black, burnt orange, and gold color scheme that would suit the interior of an old-school Cadillac.

The sub-border is what catches the eye. It’s a round-edged frame with a multi-tone border. Within that border is a black-and-gold O-Pee-Chee logo, Vasilevskiy’s nameplate in white font, and a rounded “RC” emblem.

Within this sub-border is the image of Vasy in his snow-white Lightning sweater. He maintains a defensive posture, left-pad bent inward as his eyes bulge wide.

Though we believe it’s a captivating card, you can obtain a Gem Mint copy for a very reasonable price.

SP Authentic produced a couple of notable Andrei Vasilevskiy rookie cards in 2014. This one has become increasingly valuable as Vasilevskiy racks up professional accolades.

The card feature a chest-up image of the Lightning goaltender in his white home duds. The rounded bar on his mask obscures his gaze, which appears focused on the action.

Vasy’s scribbled-style signature occupies the white space below his image. Beneath the autograph is a “Future Watch Auto” graphic inside a hexagonal silver border.

Beneath that graphic is a small, barely noticeable nameplate alongside the Lightning bolt logo. It’s a nice enough goaltender hockey card, but the autograph is the true anchor of its value.

Should Vasy continue to climb the ranks of all-time NHL goalies, except this card’s value to rise in unison? 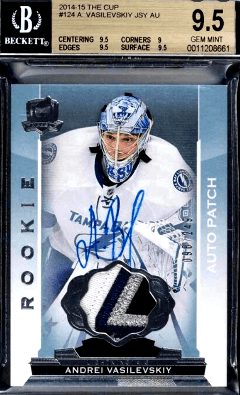 Upper Deck’s The Cup set has proven popular among collectors, who will pay premium prices for the top-shelf cards.

Andrei Vasilevskiy’s 2014 UD The Cup RC contains a patch, an autograph, and benefits from a limited print run. Together, these features make for a valuable card.

The image of Vasilevskiy, eyes wide and glove up, appears skinny thanks to two vertical sidebars. The left bar reads “Rookie”, while the right reads “Auto Patch”.

A jersey patch sits within a floral silver border, occupying the card’s lower foreground. Above the patch, on top of the Lightning logo on Vasy’s jersey, is a blue autograph.

A black nameplate operates as the base of a mantle-style graphic, upon which the jersey patch sits.

It’s not the most memorable design, but the presence of autograph and patch do wonders for its value. The Upper Deck name also helps bolster its premium price. 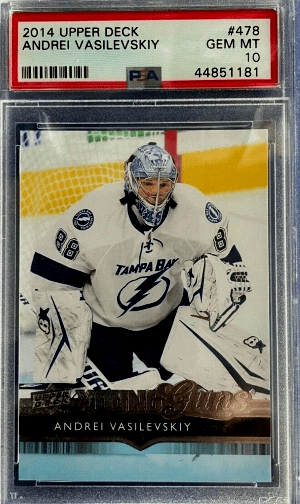 Like many Upper Deck Young Guns cards, the image of Vasilevskiy dominates the card. The photo of the Russian tender shows him looming large in his #88 white Lightning gear.

He directs his stare down towards the ice (and presumably the puck), leg pads horizontal in a blockade position. The yellow stripe of the boards looms behind his head, while the net also serves as a backdrop.

The card’s bottom border contains an ice-blue stripe. Above it is an “Andrei Vasilevskiy, G” nameplate. Above that, in raised silver lettering, is the “Young Guns” banner along with an Upper Deck logo.

Despite lacking an autograph, Upper Deck Young Guns rookie cards command a premium in the hockey card marketplace. Vasy’s is no exception to that rule.

There is no current NHL goaltender primed for more success than Andrei Vasilevskiy. Though he’s proven to be a stellar individual performer, Lightning’s success as a franchise bodes even greater for his card’s values.

As we know, team success is one factor that can make a player’s card prices surge. So long as Tampa Bay remains near the top of the NHL heap, Vasy’s cards could continue to appreciate.

Throw in his potential to continue winning Vezina trophies, and the sky is the limit for the prices of Vasy’s top cards.

We feel his cards are slight to moderately undervalued based on back-to-back cup wins and in our opinion the MVP of both.

Visit Our Shop at: 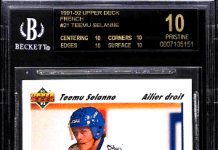 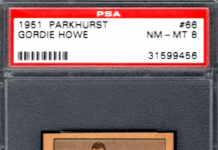